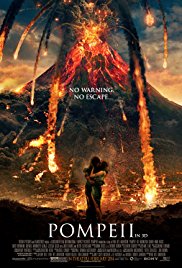 In Pompeii, the ancient Roman city of the title (circa 79 A.D.) is about to be destroyed all over again; this time for fun and profit! The second half of director Paul W.S. Anderson’s (known for all those Resident Evil movies) attempt at delivering a respectable historic disaster picture is so much quaking and rumbling that one might be inclined to check behind a crackling pillar or two for the ghost of Irwin Allen (the 1970s “Master of Disaster” responsible for The Towering Inferno, and others). Colosseums will crumble, smoking lava streaks will awesomely shoot by leaving a deathly smoke trail hanging in the sky, and scores of extras dressed in bedsheets and belts will run for the safety of the nearest green-screen. But no one is safe from the true-to-life eruption of Mount Vesuvius, wreaking total havoc for the thrill of post-Gladiator audiences. (Clearly, the statute of limitations on sympathy for the actual victims is way, way expired.)

Actually, Pompeii owes more to HBO’s Game of Thrones than anything else – not just some key cast members (including Kit Harrington), but it’s entire existence. But try as it might, this neutered PG-13 sword & sandal would-be spectacle can’t hold a blazing prison torch to that show’s levels of viewer involvement, captivating characters, and lurid sex & carnage. (And full disclosure, I’m not even a fan of the series.) Even before the great Vesuvius goes off, the film’s body-count must tally in the hundreds; yet it’s all distractingly bloodless. Director Anderson exhibits loftier aspirations for his first century volcano death movie, what with the choral arrangement in the massive score, and an unexpectedly steady visual hand. And believe it or not he does a better overall job than many might expect. 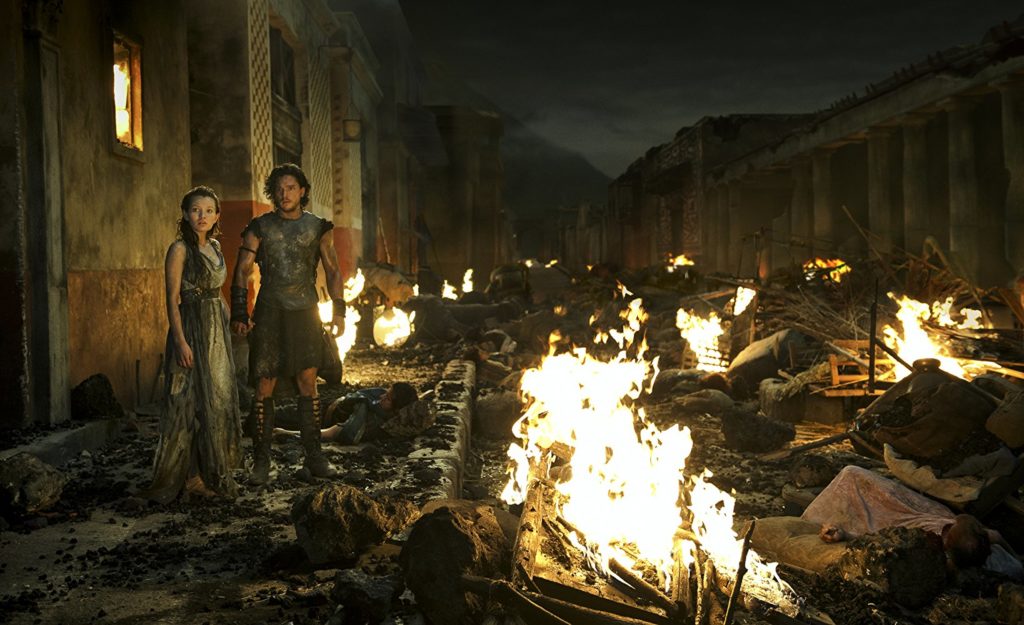 But for all that works in the film’s favor (some crowd pleasing supporting performances, a few cheered acts of heroics, and the accomplished rendering of the digital city of Pompeii), it‘s saddled with a pair of boring leads that lack chemistry with each other, and viewers. Chronically sexy-squinting Kit Harrington plays Milo, a longtime gladiatorial slave with a positively ripped chest, black flowing locks, and an apparent eye infection. His character arc is minimal, but who cares when his death-dealing is so maximus!

Emily Browning is his love interest, playing Cassia, the daughter of important city officials (Jared Harris and Carrie-Anne Moss, both with barely anything to do). Cassia’s hair is so done up with assorted braids and jewelry that it often appears that her head is in danger of falling off of her petite little frame. Somehow, she falls for Milo, that rascally slave. Try as she might, she just can’t get him out of the hock. It would take an act of God to make that happen, considering how strict and abusive as these evil snake-faced gladiator owners and senators are. (Cue ominous rummmmmmmmble… Cut to one of the villains noticing some plaster breaking loose from the ceiling over his head. “Hmm”, he thinks. “That’s odd!”. Then he promptly forgets about it, and goes back to his evildoing and grape eating. The second half of Pompeii will arrive soon enough…) 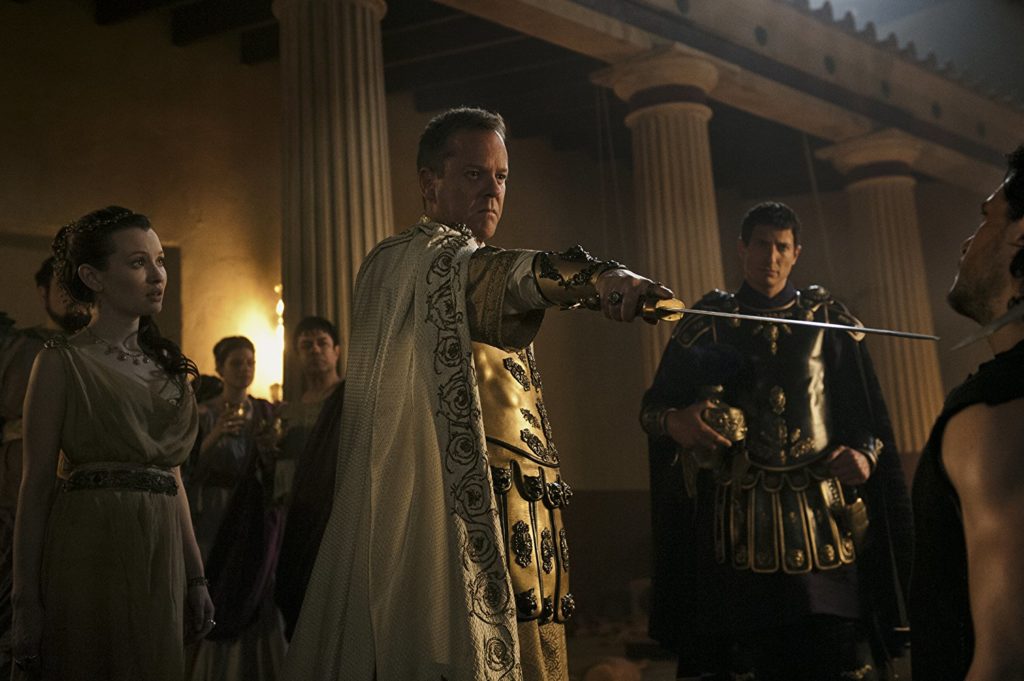 Pompeii really comes alive when Adewale Akinnuoye-Agbaje is on screen, playing Atticus, a shiny and black imposing fellow gladiatorial slave with whom Milo must form an uneasy alliance. In this current moment of 12 Years a Slave poised to win Oscar gold, Atticus’ frequent pronouncements of obtaining his freedom resonate effectively. Although the screenplay intends him to be Woody Strode to Milo’s Spartacus, Atticus thankfully upstages throughout, owning every frame he shows up in.

The other actor to steal the film is none other than Kiefer Sutherland, playing Corvus, the main villain. Beside getting to sit in the colosseum box with his feet up giving thumbs-up/thumbs-down fates to the poor souls in the ring, Sutherland gets to strut around in a big imposing chest-plate and cape as he orders that people be killed and that pretty girls marry him. It’s a hammy and frankly ridiculous role, but darned if Sutherland doesn’t give it his all, generating more fire than Vesuvius in key moments.

Once the walls come a-crumblin’ down, the whole world of the movie turns into a panic-stricken free-for-all. Our heroes become caught up in the mini-apocalypse, with cinder and ash and more cinder and ash and still more cinder and ash hanging in the air in 3D, and stuck to their sweaty bare legs and spoiled salon dos. Among other things that dominate the foreground at this point of the film are smoke, falling debris, awesome soaring lava meteors, and that new classic, lingering hot embers.

[Possible spoiler, this paragraph only] All may be lost, but that won’t stop our lovestruck heroes from challenging doom. As the city-leveling crisis nears climax, Milo announces that they will charge back into the all-engulfing horror, and steal some military horses. They will outride the death cloud to the water line! But from there…? Granted, their options are limited, but I must admit I’ve heard better plans in better films.

One could do far worse than Pompeii, but running less than two hours, this wannabe epic lacks the scope and verve to ever truly be in league with its clear inspirations such as Spartacus and Gladiator. (Although Anderson’s arena battle action is far more trackable and less showy than Ridley Scott’s.) Unfortunately, the self-propelled Milo is no Spartacus or even Maximus. (Kit Harrington is no Kirk Douglas or even Russell Crowe.) He’s only got time to be after revenge, then love. Forget revolts and uprisings – he’s got a volcano to worry about! After all, no man, woman or child in the 3D digital land of Pompeii is safe from a visual effects department with a bloodlust.