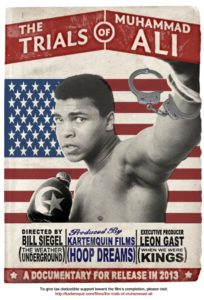 The Trials of Muhammad Ali is a 2013 documentary from filmmaker Bill Siegel that explores more of the explosive fights that took place in Muhammad Ali’s life outside the ring in the 1960’s and ’70’s.  While much is known of his public persona as it relates to the ring (“I’m the greatest”, “Float like a butterfly, sting like a bee”), it seems that what he did outside of the ring has either faded to the background, or was never known in the first place. This film seeks to bring this story to light.

The Trials of Muhammad Ali begins the film with a young Cassius Clay winning the gold medal in the 1960 olympics and uses footage to demonstrate the drive he had, even from the age of 12, to be the greatest boxing champion in the world.  This is the side we are familiar with.  The rest of the film is a journey into Cassius Clay’s transformation.  This includes a new faith, a new religion, a name change, and a decision regarding the war in Vietnam that almost cost him everything.

The 1960’s were a hotbed of civil rights, war, internal strife, self-discovery, and change.  Kennedy had been assassinated, the Civil Rights Act became law in 1964 and 1965, and America was poised to enter a war to fight the spread of communism.  Cassius Clay found himself front and center for the majority of these issues.

Having won the world heavyweight title, Cassius Clay made the transition from the Christian faith he was raised in to joining the Nation of Islam, following the teachings of Elijah Muhammad.  He also found himself rubbing elbows with the likes of Malcolm X and other Nation of Islam leaders.  As he began to adopt their cause, he began to reject much of his previous identity. 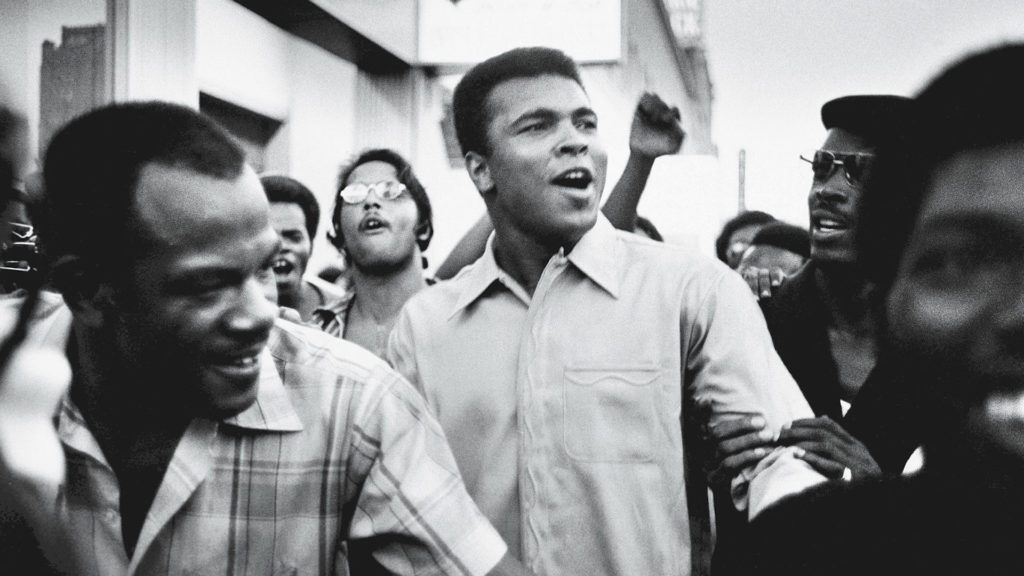 Not wanting to be identified as Cassius Clay, also the name of a prominent white politician from his home state, he began going by Cassius X.  This was a way of protesting his “slave name”.  Eventually he would be renamed by the Nation of Islam, assuming the identity of Muhammad Ali, which were prominent names within the Islamic faith.

The flashy rhetoric employed when preparing for and promoting his fights begin to take a more militant tone.  He proclaimed, “I truly believe all white people are devils” and in response to why he would not go and fight in Vietnam, he said, “No Viet Cong ever called me ni**er”.

In fact, it was this stance on the war and his desire to declare himself a conscientious objector, since he was being recognized as a minister with the Nation of Islam, that proved to be a much larger fight personally than any he fought in the ring.  Because of his associations with the divisive Elijah Muhammad and the Nation of Islam, and his refusal to fight for his country, many turned on him.  Other black luminaries such as Joe Louis and Jackie Robinson, were publicly critical of Ali’s stance on the war.  At that time, the patriotism of World War II was still the predominant driver of this sentiment.  Vietnam being an albatross of American foreign policy was just being introduced in a culture of revolution and change, and wouldn’t be fully realized as a losing battle until several years later. 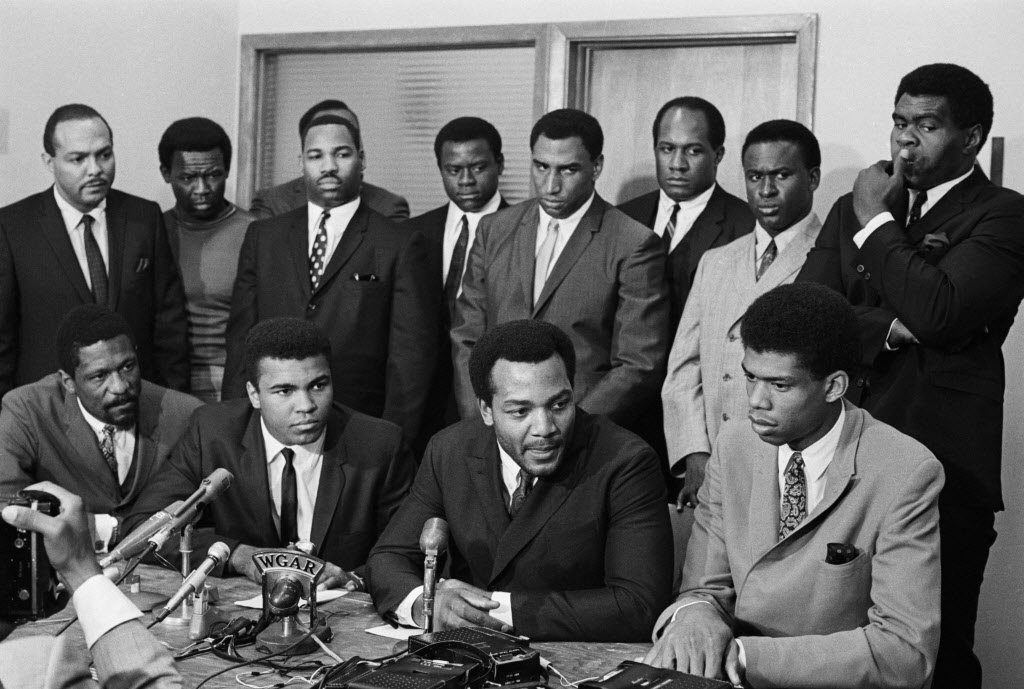 Standing up to the government and declaring that he would not fight for the country meant that he could face jail time, possibly for up to five years.   While he battled this possibility in court, he was unable to get any sanctioned fights.  In the meantime, The Trials of Muhammad Ali show us how he was able to leverage his personality to keep working, and advancing the cause of his faith.  Everything from appearing in a musical, to public speaking, and tours of Africa and other Muslim nations around the globe were part of his endeavors.  This fascinating look at his out-of-the-ring battles culminates as the Supreme Court wrestles with making a ruling on his case regarding his refusal to serve in Vietnam.

This documentary captures some great, and insightful interviews with a number of people who were a part of these events that have not appeared in other Muhammad Ali documentaries or biopics.  You will get a sense of his convictions, his character, his pride, and his anger. 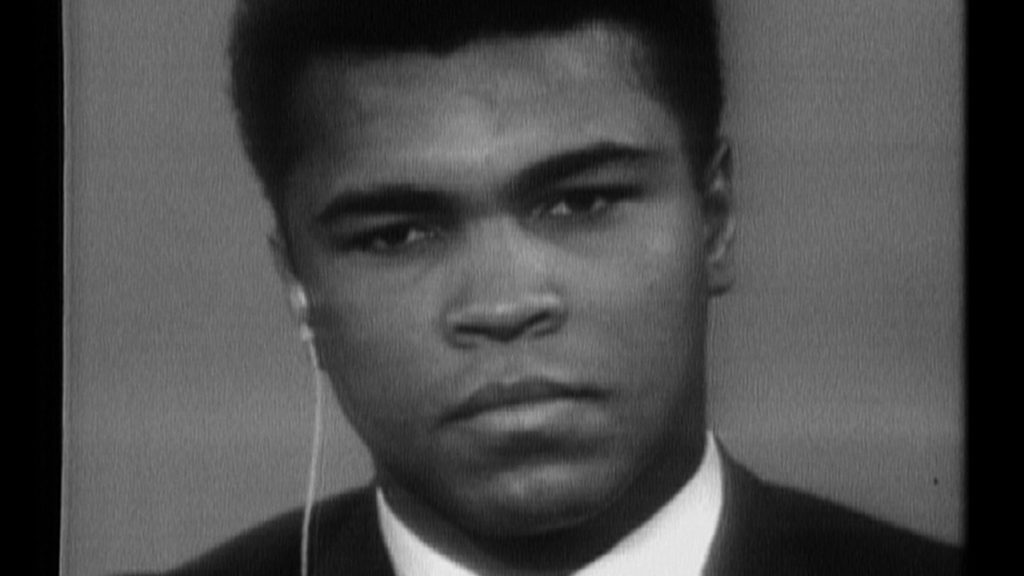 Throughout the film, the public boxing persona that made him famous continues to color our bias as we watch, either confirming what we believed already, or bringing new insight into a very complicated man.  As a Muslim, he spoke out for peace following 9/11, and even was recognized by President George W. Bush as a “man of peace” receiving the Presidential Medal of Freedom.  In the end, the decision is up to us.  Was Muhammad Ali a radical member of a fringe separatist movement who used incendiary language to perpetuate the racial revolution of the Nation of Islam?  Was he a man of peace who stood next to Dr. Martin Luther King, Jr., despite their religious differences, opposed to killing in a war, and who would later serve as a U.N. Ambassador for peace? Was he a little bit of both?

The Trials of Muhammad Ali was an Official Selection of the St. Louis International Film Festival for 2013 and will showing at the Webster University Film Series this weekend from February 21-23, 2014.