THE NUTCRACKER AND THE FOUR REALMS – Film Review

A Lavish and Imaginative Production of an All-Too Predictable Story Still Entertains. 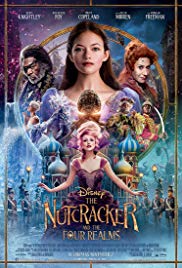 Disney has been making bank recently by making live-action adaptations to their animated classics. We’ve already seen Cinderella, The Jungle Book, and Beauty and the Beast. Now I suppose it’s… Fantasia’s turn? Or at least the Nutcracker Suite segment of that animated masterpiece. Unlike the other recent adaptations, however, this isn’t just a rote retread of the original. They’ve left out the dancing mushrooms, and present a retelling based more closely in part on the original short story “The Nutcracker and the Mouse King” by E.T.A. Hoffman and the ballet by Tchaikovsky. The resultant film is an imaginative feast for the senses that I found entertaining throughout, even if it’s already short runtime began to felt a little draggy at the end.

Mackenzie Foy (Interstellar, The Conjuring) plays Clara Stahlbaum the middle child of a wealthy Victorian London family whose mother, Marie, has recently passed. Everyone in the family is grieving, and each does so in their own way. Clara chooses to seclude herself in the family’s attic, where she makes use of her skills in invention, mechanical engineering and science to design elaborate mousetraps. Her father, played by Matthew MacFadyen (He was Athos in 2011’s The Three Musketeers), however, insists that the family keep ‘carrying on’ and wants Clara to be sociable during the extravagant Christmas party thrown by her godfather, Drosselmeyer (Morgan Freeman, sporting Doc Brown’s hair and Nick Fury’s eyepatch).

The resultant film is an imaginative feast for the senses

Before the party, the children all received one last present from their mother. Clara’s is a mysterious metal egg. It’s locked, but there is no key. It also comes with a note telling her, cryptically, that “everything she’ll need is locked inside.” Hoping that Drosselmeyer, also a genius inventor and engineer, will have a means of opening the egg, Clara sneaks away from the party. Her search leads her to a strange hallway that transforms into the hollow trunk of a tree that brings her to a place called The Christmas Tree Forest. She discovers an enchanted land comprised of four kingdoms- The Land of Sweets, The Land of Snowflakes (no jokes, please), The Land of Flowers and “The Fourth Realm,” a land whose name has been stripped from it for reasons we will soon learn. Clara soon finds out that her mother was once queen of these realms and, consequently, Clara is a princess (it’s a Disney movie, of course there’s a princess!). 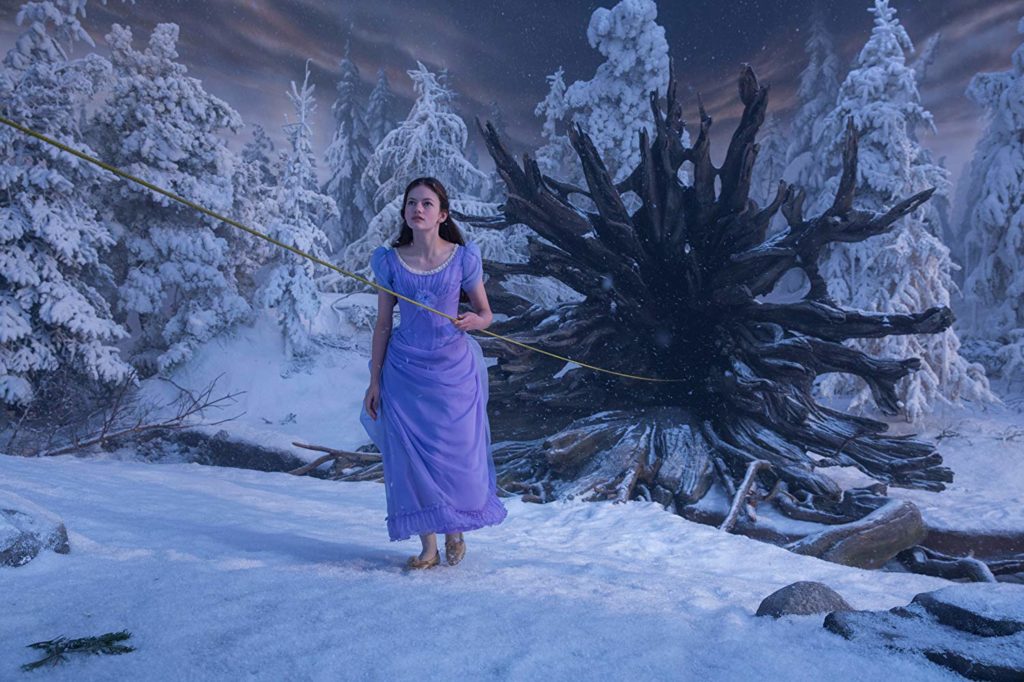 All is not well within the Four Realms, however. As Clara finds out from a Nutcracker soldier she meets, Captain Phillip (Jayden Fowora-Knight, in his first major film role), the queen of the former ‘Land of Amusement,’ Mother Ginger (Helen Mirren) has rebelled and threatens the remaining three realms. The rulers of the other realms have stripped the queen of her title, and her land of its name, but they fear she continues to plot and scheme, and the danger is not yet over. Clara gets even more expository background from The Sugar Plum Fairy (Kiera Knightly), who rules the Land of Sweets. Happily, much of this tale is delivered in the form of a ballet, appropriately, which provides a nice visual element to what must be paragraphs and paragraphs of worldbuilding and backstory.

In movies like this, when the children go to the “other world,” be it Oz or Narnia or Hogwarts or wherever, that’s when the art directors and special effects wizards get to really show their stuff. With Nutcracker, however, the “real world” of London is just as fantastical and whimsical as anything found in the Four Realms. From the very start, Nutcracker goes to work showcasing its effects and design. When the movie swoops over London at the beginning, it presents a mythic view of the Victorian era that wouldn’t be out of place during Clara’s grand tour of the realms later. Sure, maybe people aren’t made of flowers or snow, but no space in the magical kingdoms can compare to that of Drosselmeyer’s workshop with giant whale skeletons and sharks hanging from its sweeping arched ceiling. This movie is a visual treat from the word go.

This movie is a visual treat

It’s a shame the movie’s inventiveness doesn’t extend to the screenplay. This is a paint-by-numbers ‘hero’s journey’ of a sort we’ve seen dozens of times before. When they arrive, the story beats are expected and unsurprising. It’s not a stupid screenplay, it’s just so very… cookie-cutter. The kids who are the target audience for this probably won’t mind the familiar conventions and it won’t insult the adults who accompany them. That’s not a great pull-quote, admittedly. It’s probably a minor complaint, considering that I’m positive about this film, but by the third act, when the film has to lean more heavily on its storytelling than its visuals, it really slows down and becomes less engaging. 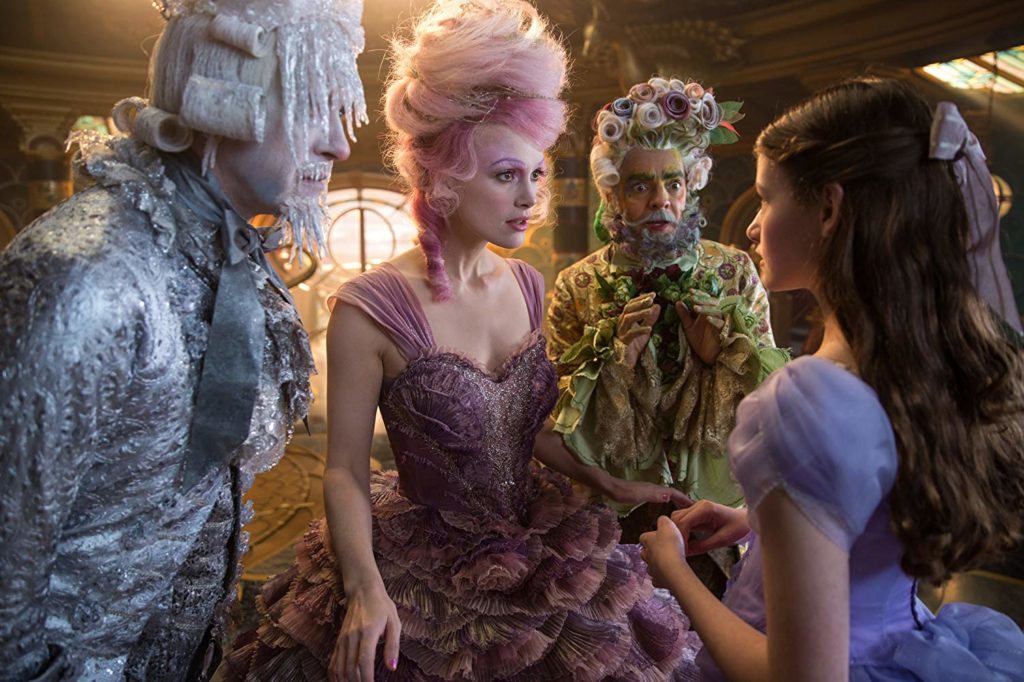 Nutcracker has two credited directors, Lasse Hallström (My Life as a Dog, What’s Eating Gilbert Grape) and Joe Johnston (The Rocketeer, Captain America: The First Avenger). Hallström completed the principle photography for the movie, but when reshoots were needed, he was unavailable. Johnston stepped in to complete the film. It is to the film’s credit that you really can’t discern any stark differences between the two directors (unlike 2017’s Justice League, where it was much more obvious). One sequence, when Clara leads a small force into the Land of Amusements, must be Johnston’s work. When the soldiers are suddenly pulled underground by mice, multiple Wilhelm Screams are heard. Like his mentor, Steven Spielberg, Johnston is a student and aficionado of 1950’s Hollywood and he gleefully uses callbacks like this in all of his movies.

The film also directly references Fantasia as well, when it shows a conductor leading an orchestra in silhouette. Fantasia was a huge gamble for Walt Disney. It was not only ambitious on an animation level, but on a technical one as well- requiring the development of new sound recording and playback technologies that led to stereo sound. It bombed, mostly due to the European market being essentially cut off due to World War II, and it would take decades of re-releases for Fantasia to finally earn back its cost. Still, the movie is widely regarded today as a masterpiece, and its one we would not have if Disney wasn’t willing to take a risk.

These days, the Disney company is a lot less fearless. The Nutcracker and the Four Realms is a solid piece of entertainment, but it’s not breaking any new ground. There are two ballet sequences in the movie- one, when Clara is given the story of how her mother first found the Four Realms, and the second during the ending credits. During these performances, digital effects, lighting and fantastic stage designs electrify and enhance the extraordinarily skillful dancing and stage design. What if the whole movie was told this way? That would be a level of daring you don’t see from major studios anymore. It, too, would probably bomb. But it might have given future movie watchers something truly special.