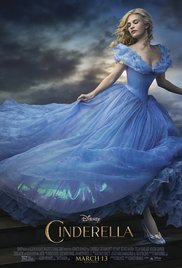 Such are the paraphrased pronouncements at a key point of Kenneth Branagh’s tempered and well measured take on the oft-told tale of “Cinderella”. Perhaps more to the point, grace doesn’t cost. And if the many tellings of this enduring tale have a common point, it is to take the grace we’re given, even as it piles on in most unexpected places, from the weirdest of sources.

There’s a certain Grace evoked in this Cinderella, via Downton Abby‘s Lily James in the title role: Grace Kelly. Clearly, it is the particular timeless elegance of Ms. Kelly that Branagh, and all of Disney proper behind him, were striving, at times straining for. And even as the casting of James isn’t quite a grabbing of the brass ring, the actress remains a good choice nonetheless. Equal parts ordinary and pretty, this Cinderella never comes off as a fashion plate or runway model, even post-Fairy Godmother makeover (spoiler alert?), with the actress covered with glitter and ruffles.

Timeless beauty, and “it’s what inside that counts” is something that the film manages to sincerely pull off, a failure of so many other Cinderellas that end up inadvertently selling little girls on the virtues of making an entrance in the most dazzling dress and shoes.

Kenneth Branagh has helmed nothing short of the biggest, grandest, most across-the-board version of Cinderella ever committed to the screen.

(Those involved with Disney’s other recent major live action fairy tale offering, Into the Woods, claim that a part of that film’s satisfying withholding of visual detail came down to the fact that Cinderella, in production concurrently, had most of the available money. Apparently the Fairy Godmother forgot to visit director Rob Marshall and composer Stephen Sondheim in that regard.)

Cinderella wrings with the artistic hopes of an evergreen effort, something that will play for ages to come. Again, close but no cigar. As respectable a job as Branagh does in sidestepping the things that the ever-growing legion of embittered anti-Disney moms hate (unhealthy priorities in the way of pining for a charming prince, unrealistic body image portrayals, breeding of narcissism, and a perceived unnatural tilt toward outward beauty, at least in the “Disney Princess” marketing) in favor of pursuing something that is truly classical, he ends up with a film that is, well, kind of dull. 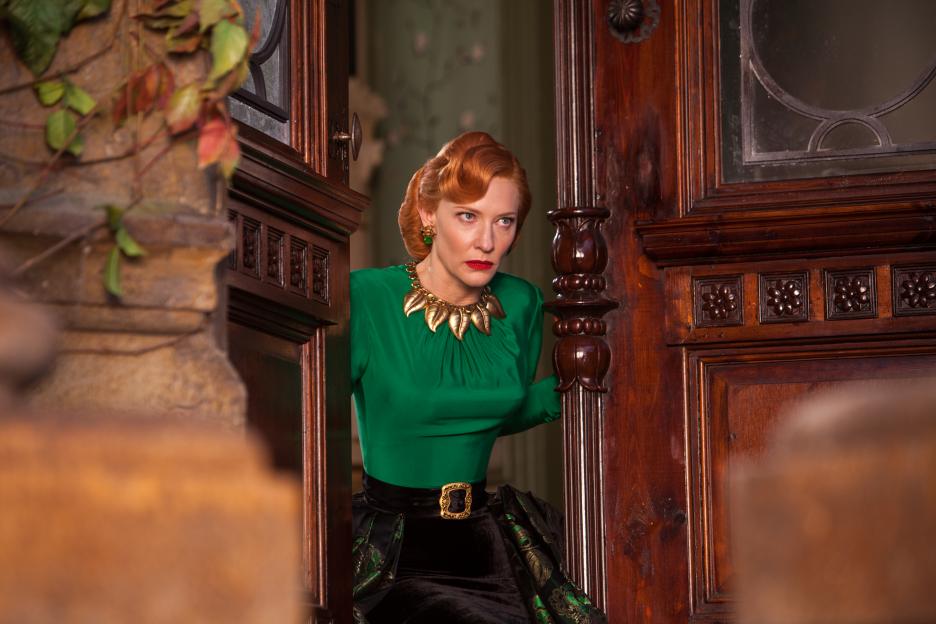 Cate Blanchett is The Wicked Stepmother in CINDERELLA.

With no song singing to bring it to life in the mopey parts, Cinderella also come off as a sad film for much of its running time. (My seven year old daughter and Disney animated Cinderella devotee liked this film, even though three people died, all parents.) A dream may be a wish your heart makes, just don’t wish it in song here. (Although that particular classic tune does turn up, accompanying the later end of the loooong closing credits.)

Even if Lily James’ Cinderella ultimately parlays virtuousness almost exclusively via innocuous gentility, there are a few fun casting coups herein, both of the acclaimed veteran variety. Cate Blanchett is gleefully wicked as Cinderella’s marrying-up gold-digging stepmother, evoking a sort of cruel Blue Jasmine. Although my daughter was perplexed as to why the typically aging harpy Wicked Stepmother was played by someone so… pretty. Good eye, kid. They worked hard to pour the attractive Blanchett into a gaunt, erudite crassness, but at a glance, one nonetheless sees why Cinderella’s father may’ve opted to take up with the woman in the first place. It’s this character who benefits most from the extra minutes freed up to the (familiarly thin) story by the lack of singing, proving again that it pays off far more to play an antagonist with bite than a forgetably kind protagonist.

But the film’s most noteworthy get has to be none other Helena Bonham Carter in the Helena Bonham Carter role of the elegant yet flighty Fairy Godmother. Nobly disheveled in a way only this actress can pull off, it is good that Branagh did right by his film in casting her, (and that she accepted) even though they share a much ballyhooed romantic past. She gets to narrate the whole thing in a soothing, British whisper.

Branagh, as evidenced in his later-career directorial work, understands well enough what movie he’s agreed to make. With Thor, he delivered a fun but stakes-worthy adventure, and proved he could be a team player. With Jack Ryan: Shadow Recruit, he made an espionage movie that was so undercover that no one saw it. 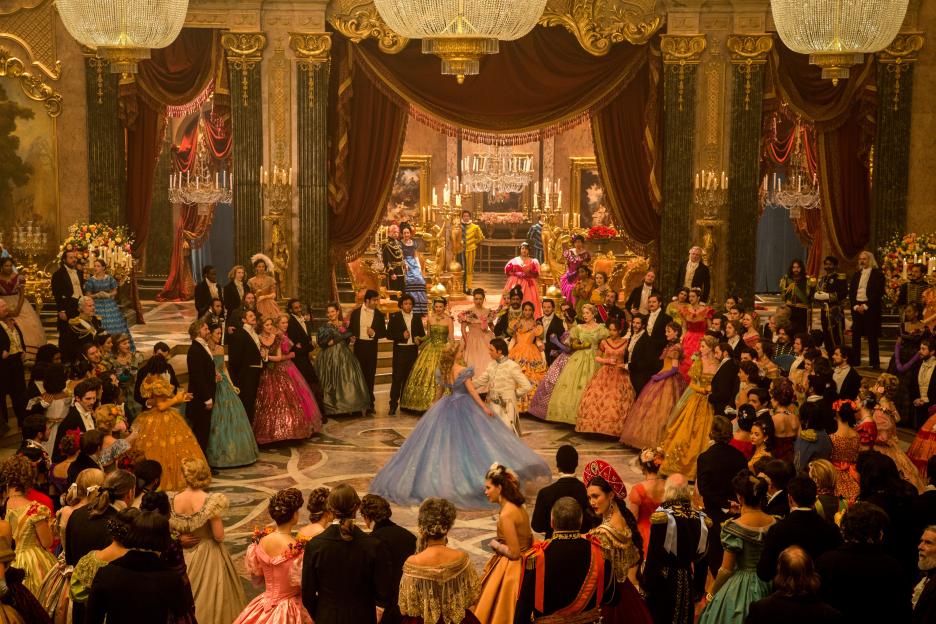 Here, he’s helmed nothing short of the biggest, grandest, most across-the-board version of Cinderella ever committed to the screen. There’s just enough of the 1950 Disney animated version peppered into the musty olde tyme “reality” of the thing to satisfy those fans, while also reflecting the original fairy tale and adds a few new twists that actually benefit the whole thing in the logic department. That is, Cinderella is still friends with the castle mice, the fattest one named Gus. But the mice don’t wear little sweaters and help her make a dress.

It’s merely the story of a regular girl who had it very, very good, then after a while of things being very, very bad, gets to princess up thanks to a bit of unexpected magic. Hers is the kind of Act I that is best left as an Act I, lest we see how this fancy life might not be quite so happily ever after after all. (For that, see Into the Woods, or Grace Kelly’s own true royalty.) And despite the theme of heaped-on grace, if one were inclined to make a case that this particular Cinderella is actually made to earn the Godmother’s favor precisely through her kindness, that shoe just might fit. The takeaways this film offers are good, even if it won’t be supplanting the 1950 Cinderella anytime soon. In the broader sense, and as it should be, Cinderella is about accepting the grace we’re given. Even if it’s not Grace Kelly.

And! As if this thing weren’t already pre-sold from here to Norway, Disney precedes the theatrical exhibition of Cinderella with a new Frozen short, Frozen Fever. In it, newly re-bonded sisters get into a kindness competition with each other when Elsa decides to throw her sister Anna the very bestest birthday evs, despite her own humdinger of a head cold. The enjoyable short is satisfying in the moment, even if it does a little too closely resemble the Tangled short of a few years ago. It makes time for all the popular characters from Frozen, with wall to wall gags and a whole new song that Disney will happily sell to you as a download. It’s fantasy, but fun fantasy. Because honestly, the bickering and belittling relationship of stepsisters of Cinderella radiates a lot more sibling honesty than this box office insurance policy.