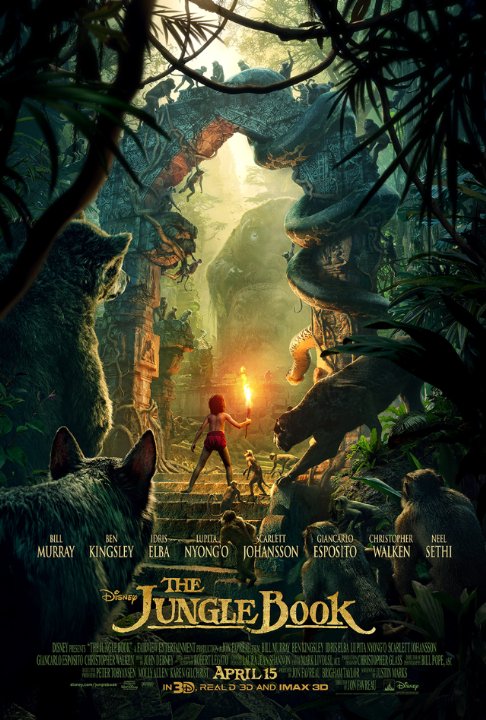 Lately, Walt Disney has been mining its classic animated films for fresh live action takes to rake in more money from a new generation longing for a new visual experience of their favorite classics.  This has largely been a success with films such as Maleficent, Cinderella, and Tim Burton’s presentation of Alice in Wonderland.  For their latest attempt, Disney has brought in the director that  launched the successful Marvel Universe with the first two Iron Man films,  director Jon Favreau.

After getting back to his indie roots with his wonderful passion project Chef, Favreau returns to head up a new tent-pole film with the live action adaptation of Disney’s 1967 animated hit, The Jungle Book, which was based on Rudyard Kipling’s classic book series. And make no mistake, this is an adaptation of the animated film alone, albeit with a darker, grittier streak that is still family and kid friendly….for the most part.

Justin Marks writes the screenplay that feels surprisingly fresh given how closely it follows the animated version we all grew up watching.  Slight changes are made in the chronology of events to keep the pace of the action moving along, but he is able to weave in the elements that fans of the classic film would defiantly be looking for.  Namely, the songs from Richard and Robert Sherman such as “Bare Necessities”, and “I want to be Like You”.

Favreau assembles a top-notch cast for this film, with the biggest names providing the voice work, while newcomer Neel Sethi makes his acting debut in the main role of Mowgli, the young man-cub who was raised by a pack of wolves led by pack leader Akela (Giancarlo Esposito) and his wife Raksha (Lupita Nyong’o) after Bagheera (Sir Ben Kingsley), the panther, finds Mowgli orphaned in the jungle and brings him to the pack who take him in. 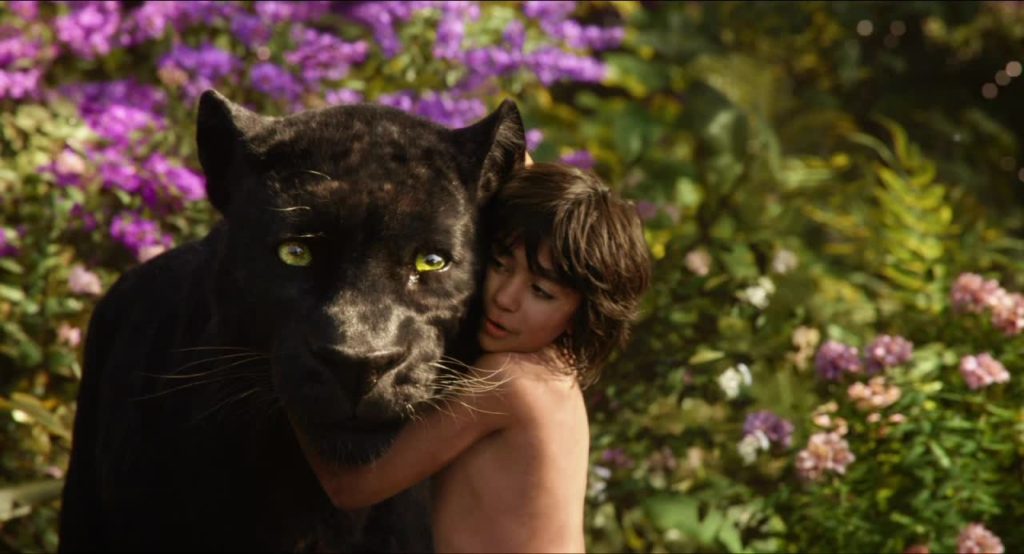 Mowgli begins to grow and develop but soon realizes that hard as he might try, he just can’t seem to do things like the wolves he lives among.  He is loved by his adopted family, but to the rest of the animals in their jungle, he is still a future man, whom they fear due to the fact that man only brings the “red flower” into the jungle….fire that consumes their homes.  He is viewed with distrust that boils over when Shere Khan the Tiger (Idris Elba) discovers him living amongst the wolves.  Shere Khan has had a run-in with man and his “red flower” and has a deep-seated hatred mankind, and thus for Mowgli, because he will one day grow to become their enemy.

After a wolf-pack council, it is decided that Mowgli will go to live in the man village with his own kind to protect him from Shere Khan’s murderous threat.  The rest of the film is his journey and the adventures he has along the way.  Unlike the animated version, Mowgli’s first encounter with Shere Khan happens right away and may be one of two or three parts that may truly scare some younger children. This near death experience kicks off Mowgli’s journey to the man-village as he encounters the revered Elephants, Kaa the snake (Scarlett Johansson), and ultimately scene stealers Baloo the Bear (Bill Murray) and King Louie the Orangutang (Christopher Walken). 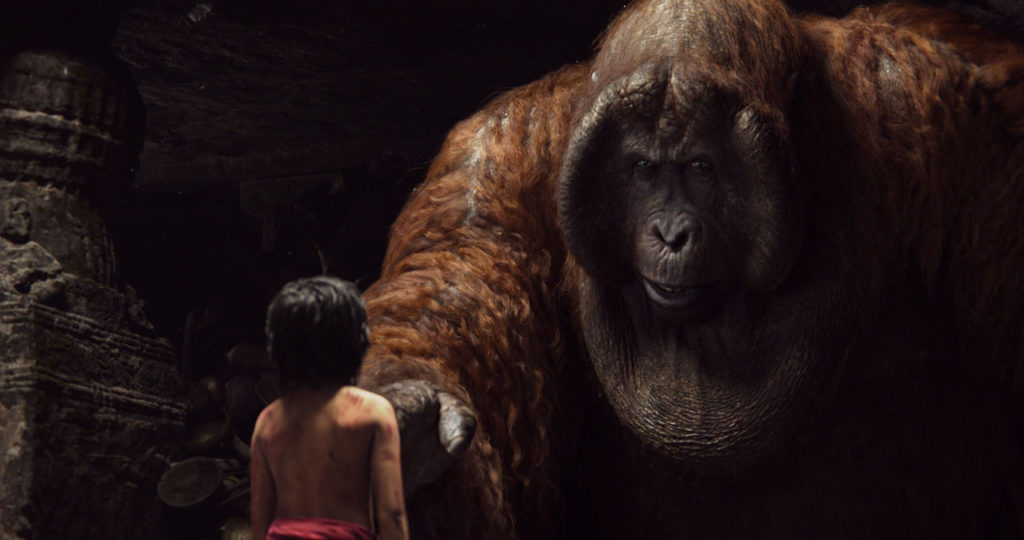 While this is not a musical, Bill Murray finds time to sing a little “Bare Necessities” and provides a lot of the same sweet and humorous spirit that Phil Harris brought to the beloved 1967 animated version.  Christopher Walken also provides a little of the song “I want to be Like You” with newly updated lyrics from original songwriter Richard M. Sherman.  Stick through the credits to hear Scarlett Johannson singing Kaa’s classic song “Trust in Me”, though only uttering the phrase in the film itself.

Favreau mostly is able to capture the heart of the 1967 film that people grew up loving, even adding in animals that appear in the books but that were omitted from the animated adaptation.

This is not to say that the film is not without its faults, but on the whole Favreau is not setting out to reinvent the wheel.  He is doing exactly what Disney brought him in to do: establish a new, polished, updated version of a classic animated film to serve as a foundation for future installments, and then to do so without rocking the boat and alienating the generations of fans that still love the original. 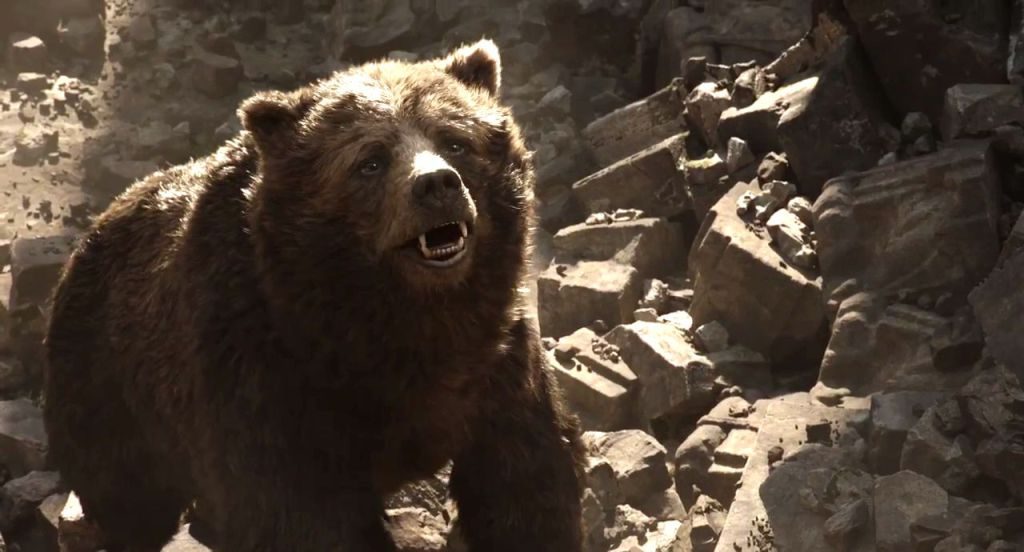 Basically this new version says to the 1967 film: “I want to be like You”.  On this basis, the mission is largely accomplished. As always, Favreau is able to attract a strong cast with an eye for young talent. Namely, Neel Sethi does a wonderful job in his first acting role and interacts well with the computer generated talking animals that populate this tale of self-discovery and adventure. The Jungle Book will provide a few scares and heightened realism to younger viewers especially, but on the whole will deliver exactly what families going to see this film want to see…adventure, fun, and the “Bare Necessities”!