JUSTICE LEAGUE – After the Show

“After the Show” is our spoiler-friendly way of talking about movies at ZekeFilm.  In this article, plot twists and hidden details of JUSTICE LEAGUE are potentially discussed. But honesty, I doubt anything here would be a surprise. I’ve branded it “After the Show” just to be completely safe. Maybe “After the Trailer” is more like it. Never let it be said that there’s no justice in film criticism… 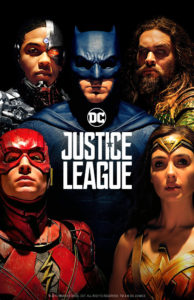 November 18, 1992. The Man of Steel had fallen, and the floodgates of his followers had opened. The mourning multitudes, dare I say hundreds and hundreds of people, were queued, ready and willing to pluck down $25 for a brand new comic book with a cover price a fraction of that. Most of these desperate fair-weather (bad-weather?) fans had never set foot in a comic book store before. Lest Superman‘s noble sacrifice at the hands of Doomsday be in vain, the black bagged edition of Superman, volume 2, issue 75, a.k.a. “The Death of Superman“, would be sure to put their children through college in the future.

I had been working happily at the friendly neighborhood comic book store for a few years by then, and was astonished to arrive to work that day to discover our typically humble fortress of solitude had become a madhouse. But we loyal comic book veterans never bought into the line from DC, perpetrated by the news media, that “it’s real”. “Give it a year”, we muttered to ourselves, “He’ll be back”. Sure enough, the resurrection proved not to be a matter of “if” but of “when”. The return of Superman was, in a sense, the worst kept secret in comics, an inevitability that proved to be, indeed, about a year away.

Today, those bagged and sealed comics aren’t worth any more than the money folks paid for them almost exactly twenty-five years ago. What has compounded is the legacy of the whole thing. Though a rambling and messy tale at the time, “The Death of Superman” has been streamlined in numerous repackagings and retellings. Novelizations, animated film versions, video games, even toys. Is it any surprise that, as iconic as certain details have become, that Zack Snyder and company would come along and cherry-pick key moments for their major if misguided DC Comics feature film shared universe mega-franchise? 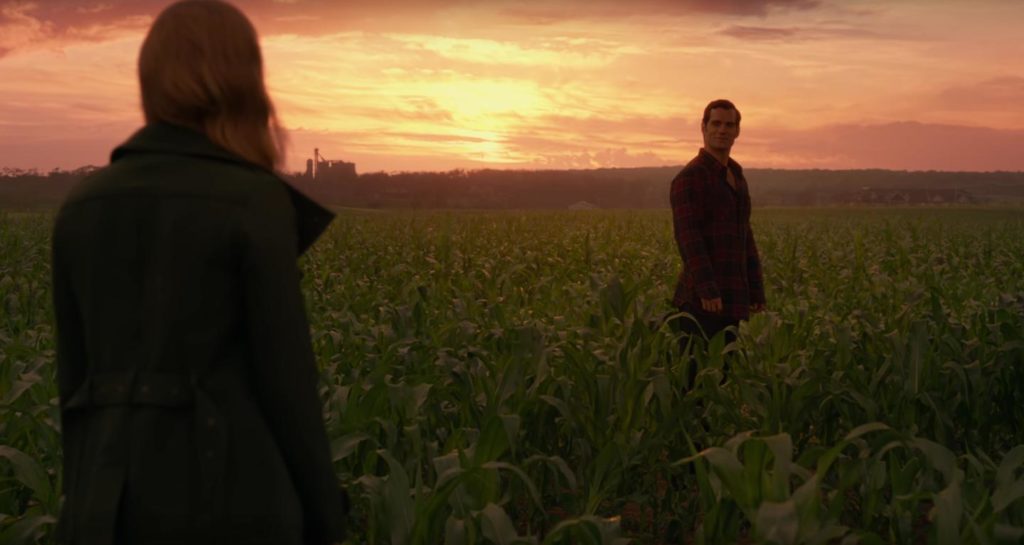 But wait… why all this talk about a character who’s supposedly not even the film at hand…?

Oh, pshaw. If Superman’s return was the worst kept secret in comics, the return of Henry Cavill’s Man of Tomorrow was never really any kind of secret at all. Yes, in one big rushed afterthought of “Hey, let’s try this…!”, the big guy comes back. Self-assured and apparently having left his destructive adolescent angst in the empty tomb (And good riddance to that. Holy crap.), Cavill finally gets to show his super-chops. (Not to mention his super-abs… Kal-El rises from the grave without a shirt, and doesn’t find one for quite a while.)

Through behind-the-scenes tragedy and upheaval, including wild creative shifts manifesting in numerous scenes that bellow “Last minute green-screen reshoot!!”, Justice League has made it out the door and into our faces, and isn’t awful. Mission accomplished?

This incarnation is a most welcome change from the character as introduced in 2013’s Man of Steel, a bleak, loud and exhausting epic unto itself. Batman v Superman: Dawn of Justice followed, that notoriously ugly, awful and grim movie. Then Suicide Squad, all raucous and gnarly, but in a bad way. This hasn’t been a dream, nor a hoax, nor an imaginary story. What it has been been is rough. For the poor fans of DC, it’s resulted in variations on denial mixed with heartbreak. Thankfully, a great savior arose in the form of not a super man, but a woman – Wonder Woman. A decent enough summer blockbuster with a perfect star in Gal Gadot, Patty Jenkins’ WWI actioner was immediately elevated to a disproportionate level of cinema greatness and feminist flag-waving.

It’s all been leading up to one thing… This. This Justice League movie. Long-awaited and inevitable, the very fate of a franchise hinges on it. 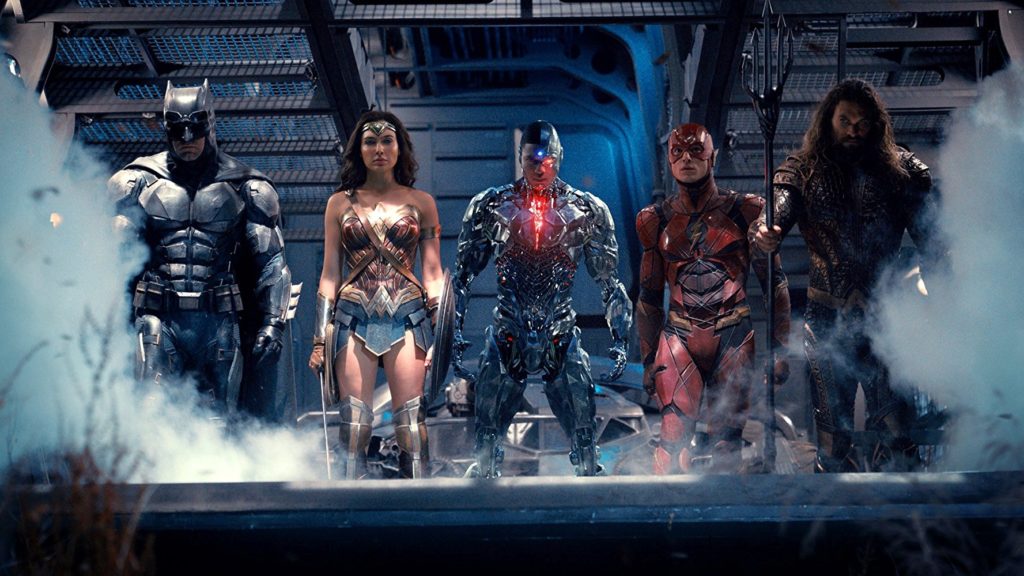 Mandated with the introduction of no less than three brand new heroes, plus the furthering of the storylines of several more, plus Lois Lane’s (Amy Adams, still hanging around), it should come as no surprise that Justice League has a necessary economy about it. Clocking in at a considerably merciful two hours, (Batman v Superman ran forty minutes longer than that) this is a movie that, like Ben Affleck’s Bruce Wayne, is so desperate to correct past mistakes, it’s almost unrecognizable at times. Of course, considering what beget Justice League, that could only be a good thing. It’s quick, quippy and colorful – three things that Snyder’s previous DC films decidedly are not.

Justice League is charged with introducing audiences to these long-teased versions of The Flash (Ezra Miller), Cyborg (Ray Fisher) and Aquaman (Jason Momoa). In terms of marketing, I suppose this is a victory: Momoa’s pumped and savage King of Atlantis has been ubiquitous in the culture long enough that by the time he’s actually in a movie (this one), his casting, remarkably, doesn’t come off as the kind of ridiculous overcompensation for years of Aquaman jokes in Entourage and 40-Year Old Virgin.

Even without the glaring knowledge that any casual fanboy knows at this point, that Joss Whedon was recruited to give this project a major late-in-the-game makeover, this whole movie is unmistakably Marvel’s The Avengers by way of Buffy the Vampire Slayer, seasons five and six. It even comes complete with some piously talking chumpwad bad guy with a high and mighty streak who’s nefariously after some glowy all-powerful cubes. The movie, plagued with major reshoots and retinkering, is operating too deeply in survival mode to be smart, witty or meta about itself like those previous Whedon projects. Through behind-the-scenes tragedy and upheaval, including wild creative shifts manifesting in numerous scenes that bellow “Last minute green-screen reshoot!!”, Justice League has made it out the door and into our faces, and isn’t awful. Mission accomplished? 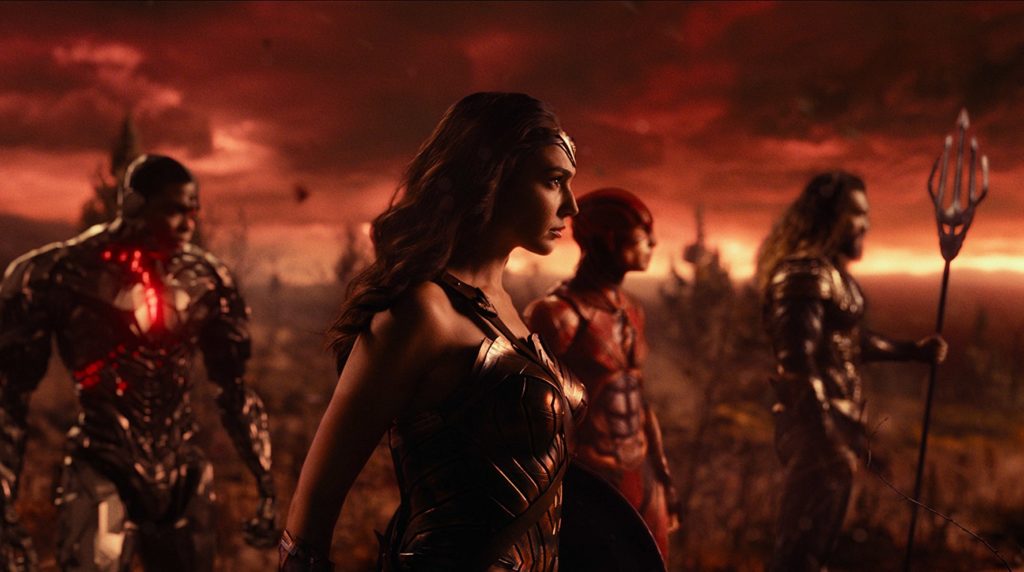 The course-correction couldn’t be more obvious, not so much a step in the right direction as leap in that direction over a tall building in a single bound. Colors are, for the first time, glossy and popping. Snyder’s video game styling is somehow a bit more at home with this more digitally cartoony veneer. Wonder Woman’s home island actually looks and reads better here than it did in her own movie. In short, the aesthetic for this universe might finally be starting to gel. It’s been bumpy and messy, and they’re not there yet. But the light might be around the corner.

Yes, we get it, our heroes are flawed. This franchise has been mercilessly pounding that into our skulls since 2013. But considering the current, rapid crumbling of famous real-life personalities, maybe it’s fair to say the DC Movie Universe has been ahead of this particular curve. Or perhaps the people in charge just know it all too well: Top star Ben Affleck is now an accused sexual harasser. Director Zack Snyder is a repeat sexual leerer, shooting up the short skirts of his “strong women” characters, a consistent visual signature. Show rescuer Joss Whedon is an admitted sexual philanderer, having operated under the cover of outspoken feminism for years. DCU producer Brett Ratner is a noted sexual sleaze-bag that Gal Godot wants to go away. Not that any of that has anything to do with the mayhem playing out on screen, per se, and let he who is without sin cast the first stone, and all that. But what is prudent is that together, with this movie and others, these people have diluted and commodified major fictional events into passing inevitabilities.

For reasons that should be obvious from the dominating corporate point of view, Justice League is a movie that desperately, desperately wants to be liked. Sure, it’s likable… but it is most definitely not memorable. On one hand, we finally have a DC Universe film with Batman and Superman that parents can feel okay about taking their children to see. And finally, finally, Superman is likable and worthy of cheering for.

But on the other hand, the whole thing feels cookie-cuttery; light, disposable, and predictable at every single turn. It’s a shame that Justice League is one big shadowy yet colorful echo, but at it’s not oppressive. The jokes aren’t smart or even funny like they think they are (did Whedon do his polish on this in one night?), but at least there are jokes. In any case, even if you’ve only seen a handful of movies in the past decade, odds are you’ve seen all of this before. Twenty-five years ago, or far more recently.