What’s Left When the Clothes That Make the Man Are Stripped Away? 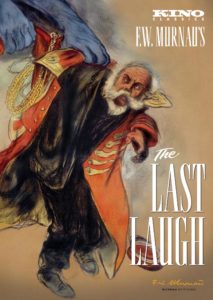 Many years ago, after several years as a stay at home parent, I started working part time as an English as a Second Language instructor through our local community college.  This made me “adjunct faculty”.  My friends who currently teach in community colleges know how humble and underpaid that position really is, but at that moment in my life it sounded amazing.  Suddenly I could answer the “What do you do?” question with a title that made me feel like someone.  It was vain and foolish to think that my dignity increased with that job title, or that “just” parenting made me less worthy.  But there you have it.  We all drink the poison of cultures that define our worth by income, titles, degrees, positions – and uniforms.

The hotel doorman at the center of F.W. Murnau’s 1924 film The Last Laugh takes great pride in his uniform with its gold braiding, brass buttons, military lapels.  He stands straight-backed and proud at the door of The Atlantic like a ship’s captain, the ruler of all he surveys.  He’s not a young man, though.  He is stout and gray headed, and lifting heavy trunks from atop cabs is becoming increasingly difficult for him.  The hotel manager spots the doorman taking a break after carrying a trunk and makes a note:  this employee is no longer fit for the exalted position of doorman. 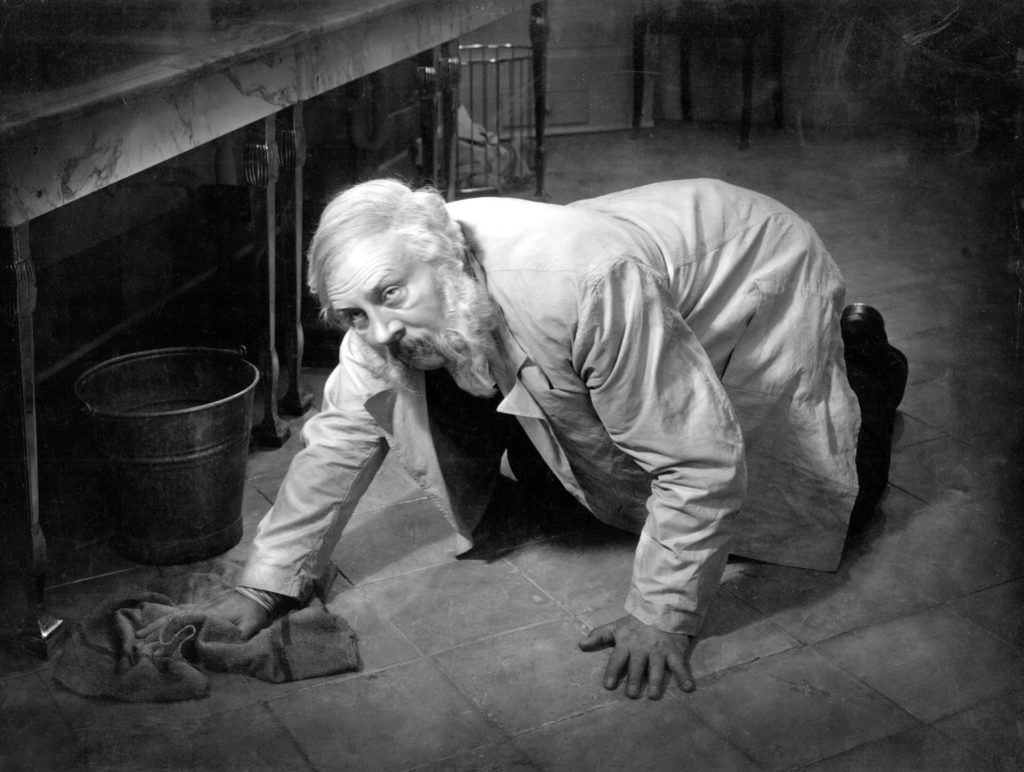 We’re all going to reach this point, aren’t we?  The Last Laugh portrays the inevitable end of a treasured career as a monstrous horror, or at least that’s how it’s received by the doorman himself.  He is not fired by the manager, but demoted to washroom attendant.  It’s not as prestigious, of course, and the man must give up his grand uniform for a simple white jacket.  But the reality of the situation is that he can no longer do the work required of a doorman.  In a desperate attempt to keep his job the doorman tries to hoist a trunk over his head in the manager’s office, and ends up both dropping the trunk and falling to the floor himself.  We age.  Our bodies and minds betray us.  Titles, positions, and uniforms drop away.  That scene in the manager’s office is the most harrowing in The Last Laugh as another hotel employee strips the doorman, now almost catatonic with grief, of his coat and hat.  His entire identity was bound up in those garments, and without them the man becomes a hunched, stumbling figure of despair.

Emil Jannings plays the doorman, and the physical transformation between the stiff backed, swaggering figure in uniform and his shriveled decrepitude after his demotion is startling.  But rather than giving me deep sympathy for the character this change made him seem as vain and foolish as I was, proudly announcing that I was adjunct faculty.  He remains employed.  He has a niece,  newly married, who cares for him.  He could choose to find dignity and meaning in his work as a washroom attendant, but he is so desperate to save face that he actually steals his doorman’s uniform and continues to wear it home from work. 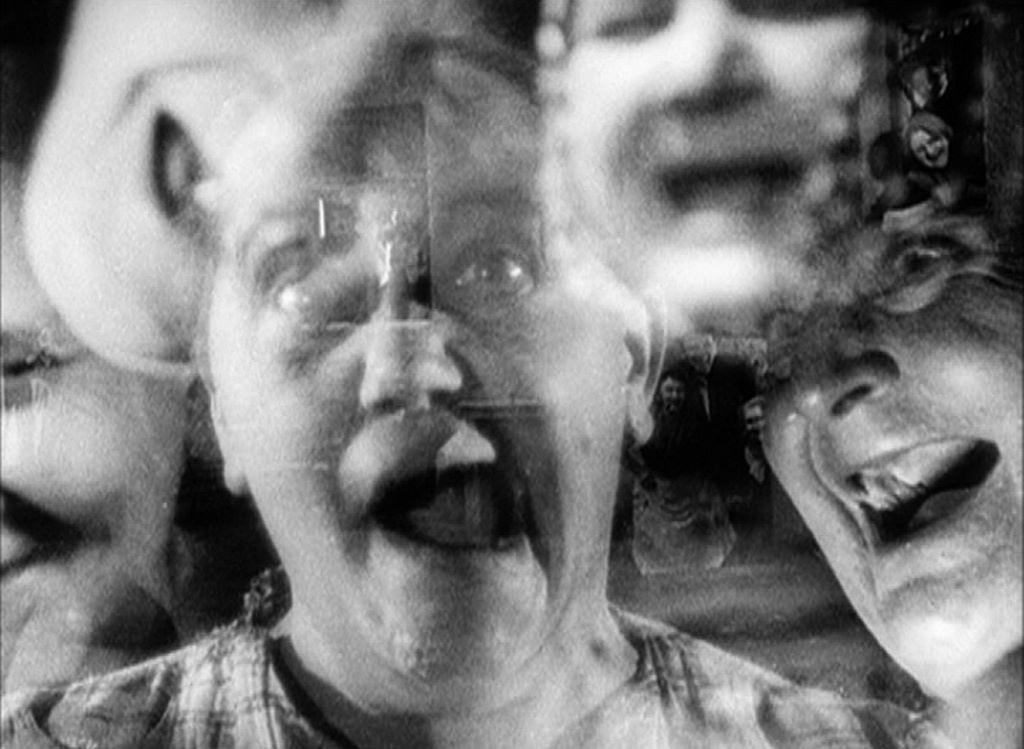 Of course, he is found out.  The neighbors who saluted him as a doorman mock and laugh at him (in a nightmarish montage of jeering faces) as he comes home in shame.  Even his niece and her new husband recoil in horror from him, now that they know the truth about his job.   It is such exaggerated cruelty…are we to believe that these ordinary townsfolk would reject one of their own for aging out of his job?  Who does that?

German-French film critic Lotte Eisner said that The Last Laugh could “only happen in a country where the uniform was more than God.”  She suggested the doorman’s identity being completely subsumed in the uniform of The Atlantic foreshadowed Nazi Germany’s embrace of National Socialism – a political movement in which individuals disappeared into the crisp, smartly outfitted hive.  The doorman was something else once, surely.  When did he lose sight of the man inside that coat?

The Last Laugh is a beautifully shot film with a painterly look and tremendous care given to the tiniest details.  It’s best remembered, though, for the freewheeling camera work executed by Murnau (Sunrise, Nosferatu) and his cinematographer, Karl Freund.  The camera swoops and glides down elevators, through lobbies, across an entire neighborhood built on an indoor lot.  German Expressionism is on display, too, in a comic dream sequence (the doorman dreams of being able to toss trunks in the air and catch them with one hand), and in first person shots of his drunken vision at his niece’s wedding party.   There’s social commentary here, too, as The Atlantic’s employees – some very young, some very old – are contrasted with the laughing, carefree hotel guests.  A couple of scenes show guests laughing and laughing and laughing, until their happiness starts to seem like hysteria.  They are intoxicated on their own privilege. 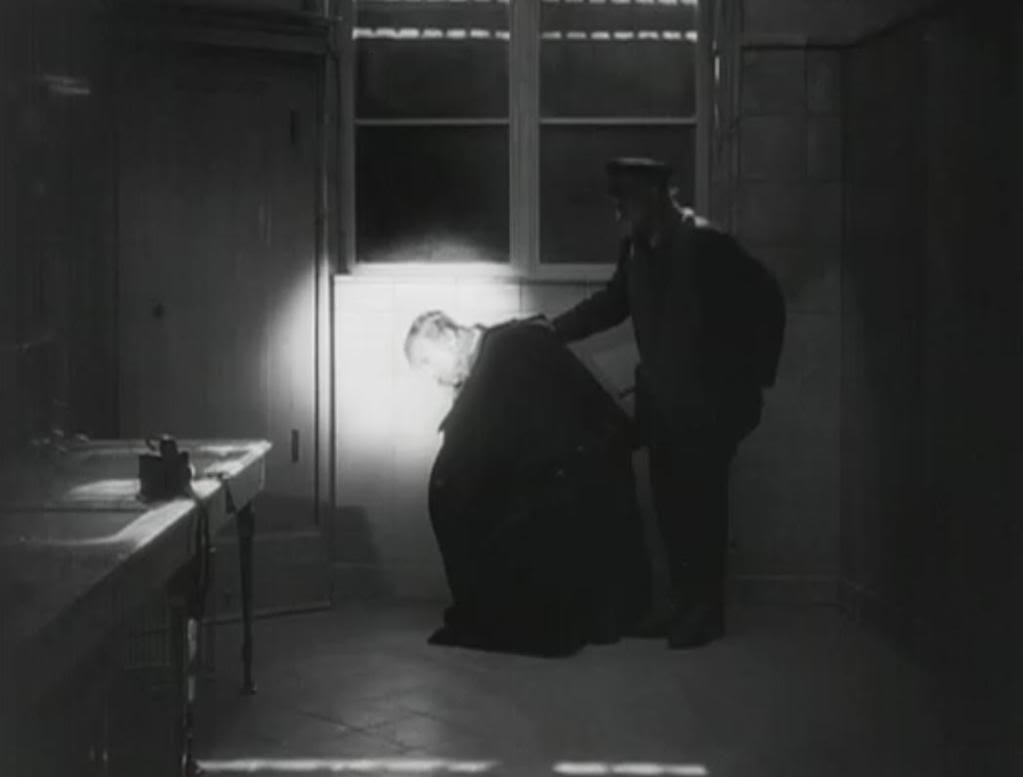 The Last Laugh has a twist ending that I won’t give away.  Murnau avoided intertitles through almost the entire movie, but introduces the prologue with an odd little apology for taking the easy way out.  Whether it’s a happy ending or a sardonic joke is open to interpretation.  I found myself wishing that the doorman had experienced some kind of growth, some sense of himself and of his value that could survive aging, loss of a job, loss of social standing, loss of independence.  Because we’re all heading there.  Someday, I imagine, my answer to the question “What do you do?” will be, “Not much anymore,” and I hope that I will have a core sense of myself that will keep me from the existential despair the doorman experiences with the loss of his uniform.  Murnau’s doorman wore his coat with such pride that eventually he became the proverbial empty suit.  In a tragic reversal of The Emporer’s New Clothes, the clothes were there but the man had disappeared.

Kino Lorber’s Blu-ray restoration is a treasure trove of bonus features.   These include a new musical score by the Berklee Silent Film Orchestra, the original 1924 score by Giuseppe Becce, an audio commentary by film historian Noah Isenberg, and a 40 minute making-of documentary.  A bonus DVD features the unrestored export version of The Last Laugh, with music by Timothy Brock, performed by the Olympia Chamber Orchestra.