ALL ABOUT NINA – Film Review 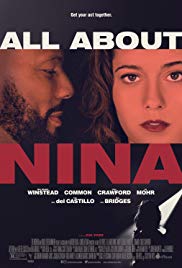 In a case of art becoming life, All About Nina comes to us as our nation is knee-deep in the middle of the Brett Kavenaugh Supreme Court nomination whereby a man is accused by several women of sexual assault.  Regardless of whether one believes the accusations against him, or believes his denial, a broader discussion is taking place all across this nation that is the next step beyond what was started through the #MeToo movement.   People are waking up to the fact that so many women have experienced sexual assault, and yet are being forced to defend why they haven’t come forward in a more timely fashion.  This film, All About Nina, wasn’t made to coincide with this event, as there is no way writer/director Eva Vives, in her feature film directorial debut, could have anticipated all of these things breaking as her movie would be opening.  The fact that her film is one of the clearest answers to the question of “why didn’t you report it?”, makes it a vital part of the conversation.

Nina Geld (Mary Elizabeth Winstead- Scott Pilgrim vs. The World, 10 Cloverfield Lane) is an extremely outspoken stand-up comedian whose routine is known to include her bold pronouncements of female sexual empowerment.  She proclaims that she needs no man, has casual sex on her terms, and cannot be bothered with men who long to domesticate her to fulfill some male-fantasy of a beautiful woman at home who simply waits around to fulfill their sexual needs, on their terms.  She is independent, smart, and unapologetic in doing life on her terms.

All of a sudden, All About Nina ceases being a film about a character, transcends the scripted moment, and becomes a mirror clearly demonstrating the real-life struggle of so many souls who carry such heavy burdens with them for so long.

At least that is the persona her act gives off, and one that she partially does live up to.  The darker secret is that while she has tried to live this out, she slept too casually with the wrong man, an obsessed cop named Joe (Chance Crawford- What to Expect When You’re Expecting) who shows up randomly to her apartment looking for sexual fulfillment and to slap Nina around when she tries to stand up to him.  Joe is married, with kids, and yet Nina can’t seem to get out of this destructive cycle, mainly due to the fear she has of this man.

Finally, she follows up on an offer from her agent to move to Los Angeles to try out for a comedy show called Comedy Prime.  Her agent secures a few stand-up gigs to get established, as well as a place to stay offered by a woman named Lake (Kate del Castillo- The 33, Book of Life), a friend of Nina’s agent.  While doing her show one night, she meets a surprising man named Rafe (Common- John Wick: Chapter 2, Run All Night).  He says what he thinks, doesn’t beat around the bush, understands exactly how Nina has been fronting this tough exterior in order to avoid getting too close to anyone that might hurt her.  He calls her on it, but unlike every other man she meets, he won’t pursue anything until she is ready.  He doesn’t hide his backstory either, especially when one of his exes spots him out with Nina and lets him have it for failing to call her back.  Nina fears the worst and walks, but Rafe doesn’t give up.  He also doesn’t lie to her about any of it.  Nina doesn’t understand a man like this, but she cautiously wades into the relationship, ready to bolt at a moment’s notice. 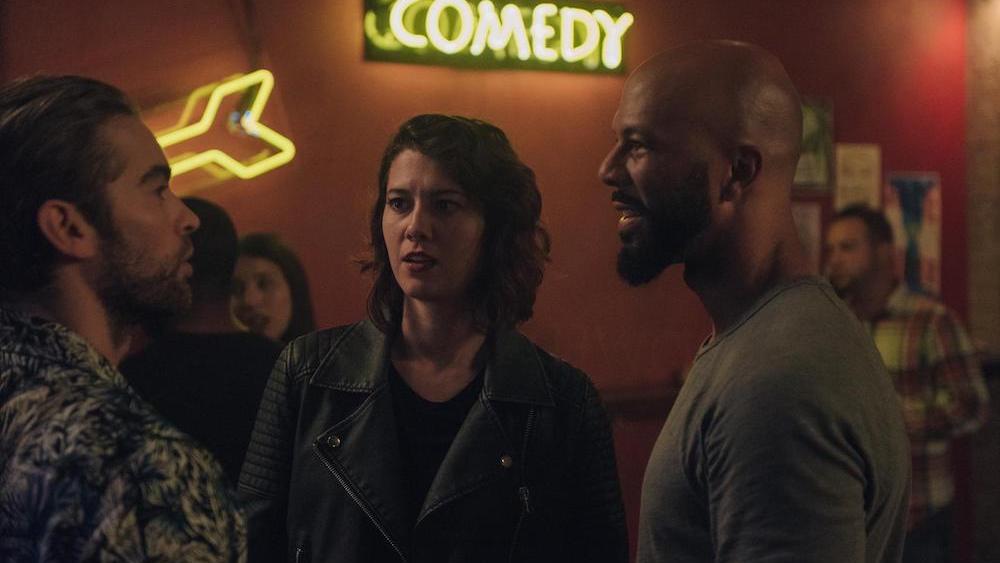 When Joe shows up in Los Angeles, Nina’s act sees all of the pain, hurt, and hidden secrets she’s been hiding for so many years come streaming out on stage.  In a world of YouTube, and Smartphones with immediate video capabilities, Nina’s confessional moment on stage goes viral.  She didn’t mean to possibly self-sabotage her career, especially her chance to be a cast member on Comedy Prime, and lash out at everyone in her life, but some wounds are so deep, that holding back the dam of emotion, pain, guilt, shame, and self-blame that often comes with surviving sexual abuse, is too much to bear.  Will Nina be able to pick up the pieces of her life once she bares her darkest secrets, and brings them into the light?

All About Nina is not preachy.  It is raw, visceral, honest, brutal, and follows the cardinal film-making rule which is to show, don’t tell.  Nina’s life is exposed and laid bare for all to see.  We clearly see that many of her actions are self-destructive.  She sees it too.  And even knowing herself, she still lashes out to those closest to her like her mother Debora (Camryn Manheim- The Practice, An Unfinished Life), or even innocent people who support her like her mom’s friend Amy (Mindy Sterling- The Austin Powers series).  It also threatens to rope in Comedy Prime’s creator, Larry Michaels (Beau Bridges- The Fabulous Baker Boys, Jerry Maguire) who meets with Nina to see if she’d still be worth anything as a comedic actor on his show after the gut-wrenching meltdown she has on stage.  Nina points out the double standard of several men who were on Comedy Prime that truly embarrassed the show’s creator, which he is able to brush off like a PR-problem.

In real life, when someone makes it known that they were abused, it seems that any mistake they have done in their distant past, or more recently, is drudged up and used to minimize the violence done to them by the perpetrator of that abuse.  Women especially bear this burden and is one of the many reasons why so many acts of abuse remain unreported, especially if it involves men in power.  We’ve seen this method used in the Supreme Court hearing debate, the Bill Cosby trial, as well individuals using this method against the myriad of women who have come out accusing Harvey Weinstein of being a sexual predator. It has also been experienced by the women coming forward to bravely accuse ministers in the Southern Baptist Convention, whom, like the guilty priests in the Catholic Church scandals, have been moved around, continuing to flourish professionally, and personally, much like Joe seems to do in this story.

Nina faces these things too, and when she airs her story for all to see, it truly is a gut-wrenching moment watching it.  All of a sudden, All About Nina ceases being a film about a character, transcends the scripted moment, and becomes a mirror clearly demonstrating the real-life struggle of so many souls who carry such heavy burdens with them for so long.  So many never share their pain and experiences, and as a result silently carry their experiences with them throughout their life.  For those who do come forward, there is a weight to be lifted for sure, but as we see in this film, and in real life, the scars, bruises, cuts, pains, and consequences still remain.  What hopefully will come of it is healing, justice, institutional change, and hope….that is, unless the victim is made to be a victim again in how we as a society react to their honest admission.  This journey might take years for some.  Others may never feel that they can share their hurt.

All About Nina doesn’t need to preach to its viewers about any of this.  It doesn’t have to.  It simply shows you.  It shows you how well meaning conversations and comments often touch on deeply hidden hurts, without the person making those comments even knowing it.  All About Nina shows you a broken individual, who despite this brokenness, is still moving forward.  She is still hoping, trying, seeking, and searching, admitting bravely that she finally feels for the first time that she could be a person capable of loving another, and receiving love from another in the way that is supposed to happen. Namely, without the abuse and pain, but for Nina, miraculously, in spite of what she experienced.   The love she receives from Rafe, Lake, and others is also a vital part of this healing process for her.  Being that kind of support network to those in your life is so important as well.

Remember that this is art reflecting life.  As such, each and every soul you meet is potentially someone who is carrying around their own hurt and pain, and they are also someone who is meant for, and longs for, so much more.  Are we someone who empowers them to move forward, or are we someone who seeks to shove them back in the shadows, even unintentionally?  Like Nina, we are all capable of loving, and being loved, despite our past hurts.  The journey to realize this, however, is often fraught with obstacles, but it is still a journey worth the risk.

All About Nina opens in select theaters on October 5, 2018