While Richard Linklater’s 70s era-centered Everybody Wants Some!! (2016) assured us fraternity culture is, in fact, quite harmless and something to be celebrated, where boys can be boys after all, writer-director Andrew Neel’s second feature film Goat is here to remind us that we’ve come a long way in our twisted cruelty since the days of Animal House.  This isn’t a depiction of brotherhood, but of a highly competitive arena, one that relishes in its groupthink ideologies, uses philanthropy as a front for unchecked excess and violently casts out any individual who doesn’t submit to the herd mentality. Furthermore, there are scenes of hazing featured here that match the moral abandonment of Pier Paolo Pasolini’s Salò, or the 120 Days of Sodom. 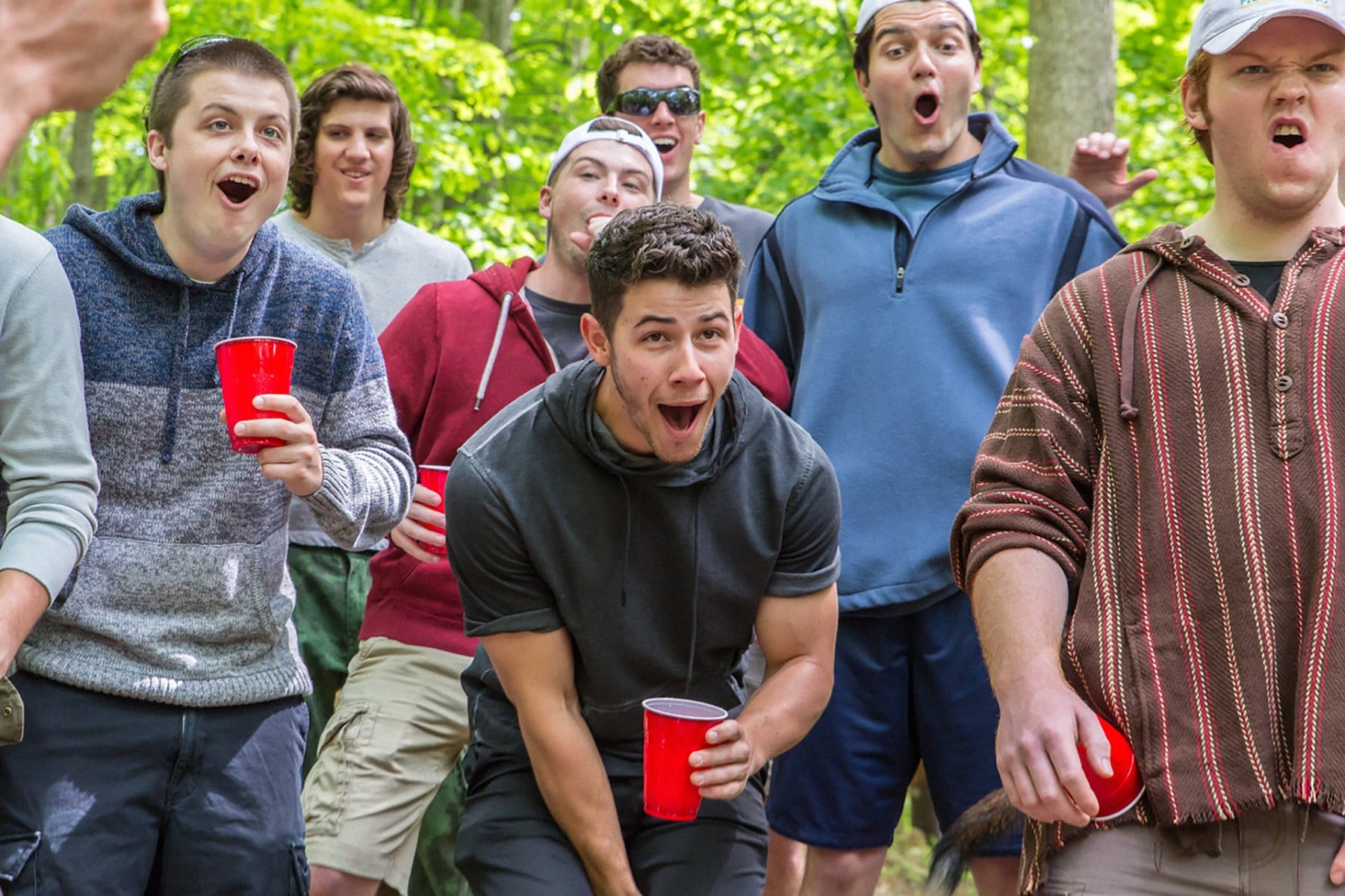 In the aftermath of a life-threatening assault and carjacking, a 19-year-old freshman college student, Brad (Ben Schnetzer), desperately looks to his older brother Brett (Nick Jonas) in search of proper psychological consolation. Still reeling from the event, the two decided the best course of action would be to tough-it-out by having Brad pledge to the Phi Sigma Mu fraternity program where he can readjust himself to a new social circle and start anew. Along with this, he’ll have to endure “Hell Week,” a set of inaugural trials where one is subjected to systematic psychological torture, physical abuse, forced binge drinking and sexual humiliation. Based on the memoir of the same name, authored by Brad Land, Goat details Land’s alienation within the party scene and eye-opening descriptions of the hazing he underwent. I wanted to walk out of Goat within the first minutes of its opening scene, which I suppose is a testament to how effective it is. It’s a film that’ll prove too confrontational for some as it aims to mirror the vapidity and unpleasantness of a culture many of us have been, or are currently at the moment, involved with. Before I’m dismissed as the resentful outsider who’s bitter because he didn’t get a bid, let me preface by saying I’m well-versed in party culture. I grew up among the wealthy and the privileged. I’ve been inside the frat houses, attended their parties, observed them and generally had a lot of opportunities to soak up what it means to live among, what could be considered, the ruling elites. Goat is, for the most part, an accurate depiction of such a society, a society that conditions its members to lose capacity for empathy and embrace the cult of the self.

These men are absolutely terrified of being emasculated. Nothing is scarier to them, not even death. It’s no coincidence that the two degrading insults director Neel spotlights throughout the film, and by spotlight, I mean gives prominence to them with eerily dedication, are: “P***y” & “F****t.” Most frequently used by males, these are emasculation tactics and and if used persistently, they usually lead to some type of violent encounter, be it towards women, other men or oneself. The irony is that despite this entire mirage of hardened straight, white male militancy barked as sacrament, beneath it is a subtle homoeroticism. One could argue these types of attitudes have been passed down to us from the armed forces and trickle all the way down to organized competitive youth sports. A more comforting thought: Some of these rock chewing neanderthals will be moving into positions of power due to crony capitalism. We’ve all heard the old phrase, “It’s not what you know, it’s who you know!” Why do we say this like it’s a good thing? The idea behind education, I would hope, is to make superior minds, not advanced careers by shallow networking, but this is the kind of outlook that the frats promote.

Brad tries to articulate his experiences about his assault to his brother Brett midway through the film, but the only sentiment Bret is allowed to offer are ones such as “I feel you, bro” or “I’m really sorry that happened to you, dude.” Code for: Please stop talking about it. Any emotion beyond that upheavals the masculine status quo. Even something as simple as contemplation is regarded as a female virtue and therefore met with extreme contempt. But moreover, as the the film progressed I became increasingly bothered by the protagonist Brad himself, who, despite his somewhat empathizable social ineptness, is every bit as without moral conscious as his peers. His whole plight has do with him not being as sexually successful as his alpha-male brother, and that’s why we’re supposed to feel bad for him. He doesn’t seem to recognize that the frat isn’t worth it, nor does he feel any sense of remorse for cheating with women who already have boyfriends—quite the opposite, he thinks it’s hilarious.

Furthermore, Brad is in for a rude awakening when he realizes most of the relationships that exist in these types of environments are transactional. “I think I love you,” he says to his most recent hook-up and is promptly turned out of the bed. But this is the culture. Everything becomes a commodity, including human beings. Basic human needs like connection, intimacy and authentic love are shunned in trade for rampant hedonism, socioeconomic status shaming and a bunch of other superficial values that are heralded to such an excess that vomiting-inducing really doesn’t come close to describing it. (That’s not to say there aren’t decent people involved in the Greek system, far from it.) One of the film’s more light-hearted highlights is an amusing cameo by James Franco, who also appeared in Harmony Korine’s Spring Breakers (2013), which is the superior party-culture film. He plays the graduated hang-around who’s returned to rage with the boys again, only this time with a much more apparent drinking problem. This brief scene alone almost pushes Goat to a recommendation.

Neel’s goal is to make viewers uncomfortable and illicit a visceral reaction, which Goat doubtlessly achieves. While some of the hazing scenes are amplified (my understanding is that campuses have begun to crack down on extreme hazing), the general attitude men have towards one another—that is one of hyper-competitive standoffishness—is right on point. Goat poses a question, which it unfortunately doesn’t dare have the audacity to try and answer: Why have we become a nation of callous trolls and sadist?