DIRECTED BY JOEL AND ETHAN COEN/2018 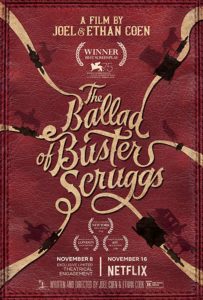 At one point in Joel and Ethan Coen’s new anthology Western film, The Ballad of Buster Scruggs, a franticly fleeing bank robber fumbles an overstuffed bag of cash, dollar bills sailing off into the desert wind.  All too often, this moment could be a metaphor for Netflix, once a humble mail order DVD rental service; now an utter media behemoth.  In its Walmart-ian attempts to placate an insatiable base, Netflix runs from thing to thing, often seeing their tossed-about production cash billowing off.  No time to recoup- gotta survive for next time!  It’s a model as precarious and cockamamie as anything, but there’s no stopping when they’re on a roll.  Heaven forbid anyone be bored.

Is this how the Coen Brothers, their decades of unique stories known for their odd cadence and inevitable futility, wind up with the current streaming king; the steroid-fueled bull in the china shop of today’s media landscape?  And with a Western anthology, no less?  One that is wildly diverse within that ingrained genre framework, somehow playing as both earnest and sardonic?  That’s one story that doesn’t appear in this film, itself an antiqued umbrella for its six smaller films.

The Coens present their new Netflix film as an old book adaptation, the tome laid down, opened at the very beginning, and then thumbed through as an old time-y transitional device.  With absolutely gorgeous color plates and finely aged pages, one comes away, despite how many of the six tales they liked or didn’t, wanting a copy. 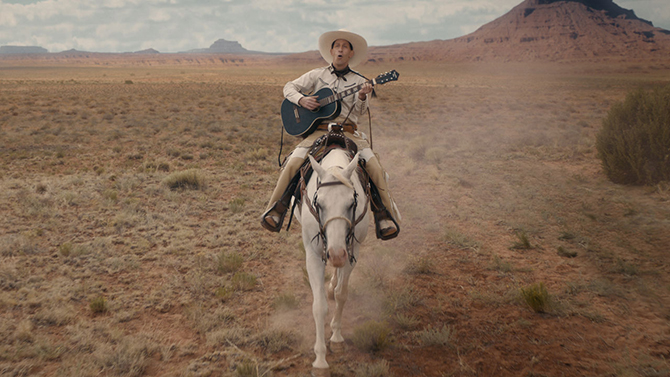 What’s is all about?  It’s about a lot of things.  For one, there’s the reconciliation of hard history and popular myth as it fundamentally applies to the American West.  That’s always good.  As we stand at what may be the country’s waning days, we look back to the now-unpopular storytelling form that’s served as a surveyor of both the history and the myth. Because, another thing it can’t help but be about is what’s become of our collective ability to process and utilize the Western.  For outside context, let us look to a page from another book…

“History without myth is surely a wasteland; but myths are compelling only when they are at odds with history. When they replace the need to make history, they too are a dead end, and merely smug”.

So writes Greil Marcus in “Elvis: Presliad”, the key essay in his epochal compilation volume, Mystery Train.  Though Marcus’s essay is about pre-death Elvis Presley and his dug-in cultural inroads circa 1975, certain passages, certain describers, can’t help but evoke the even larger myth of the American West itself.  For Marcus, the connectively lyrical evocations were entirely deliberate, equating a then-contemporary and mighty American myth with another.  Deeply critical of his subject (The King) but far too in love with his subject’s field (Rock n’ roll, of which Elvis was, of course, The King), Marcus demands both his readers’ full immersion and their willingness to witness everything being laid on the line.  One can enjoy the wordplay, structure and depth of thought, but it might hurt a little.

Such is the complex approach of filmmakers Joel and Ethan Coen in their new Western.  (Or, series of Westerns).  The Ballad of Buster Scruggs, while not their first foray into cinema’s original genre (True Grit preceded in 2010; some consider 2007’s No Country for Old Men a Western.  They’re wrong, but that’s a debate for a different time) is their smartest and best shot at it yet.  Ringing with ol’ yokel talk wrote all eloquent, the highly unconventional Scruggs delivers on the Western’s oft-aspired gritty grandeur, albeit with a twist.  Several, actually. 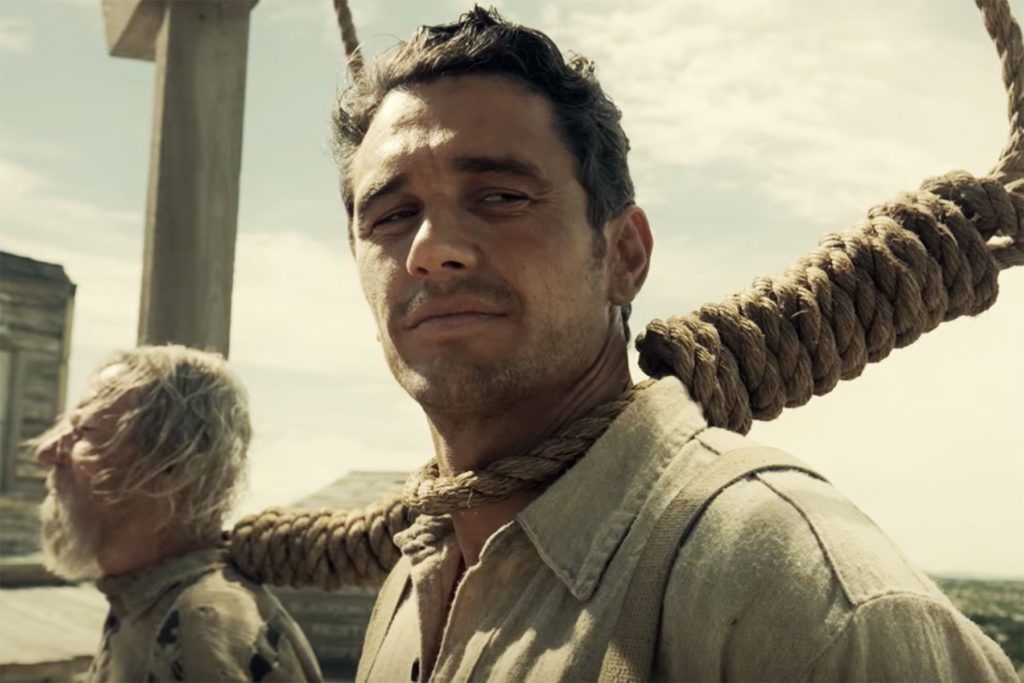 Each of Scruggs’ six anthological entries packs an entirely different wallop.  It starts off on something of a high note, with Tim Blake Nelson as the rootin’ tootin’ sharpshootin’ fourth wall breakin’ title character, before going dark, darker, and finally darker still.  Stillness, despite the rousing violent hootenanny of the initial self-titled chapter with Nelson, is a very real part of The Ballad of Buster Scruggs.  Abrupt tonal shifts are the order of the day.  The day, though is sometime in the 1800s.  Not to be a downer or even worse, a spoiler, but after a while there is indeed a residual refrain of death.  One might say it’s  something a thematic element.

“It is an ending.  It is a sure sign that a culture has reached a dead-end when it is no longer intrigued by its myths (they lose their power to excite, amuse, and renew all who are part of those myths- when those myths just bore the hell out of everyone)…”

Thank you again, Greil Marcus, but waitaminute – what is it that’s ending…?  The Old West?  Western as cinema?  The American Dream of westward expansion?  Sure.  Sure to all of it.  All of that stuff is ending, or has already ended.  But, in true subversive Coen form, here it all is, anyhow.  And yes, sometimes it may bore the hell out of everyone.  As uppity as first two chapters are (the second, “Near Algodones”, starring James Franco as the bank robber who’s responsible for the fumbled heist referenced at the start of this review), things turn quickly languid for the third.  From there, the film never truly leaves that register.

The third chapter, “Meal Ticket”, is an enervated allegory on the state of popular entertainment.  All metaphor with no easy entry, Liam Neeson plays “the Impresario” behind a one-man traveling show.  The real star, though, of both the chapter and the show in question, is a limbless orator (Harry Melling, literally playing a head and torso) billed as “the Artist”.  When his nightly presentation of dramatic recitations of the Bible and the Gettysburg Address begins losing its audience to a chicken that pecks numbers, his days are numbered.  Even in podunk Western towns where there’s literally nothing to do, it seems that erudite eloquence is a tough sell.  Is it true that people would only plop down for “high art” if it was the only thing playing?  That’s the sad truth explored here.  And the chapter, in its deliberately removed, quite aesthetic, takes the idea meta, as this is the section people seem to dislike the most. 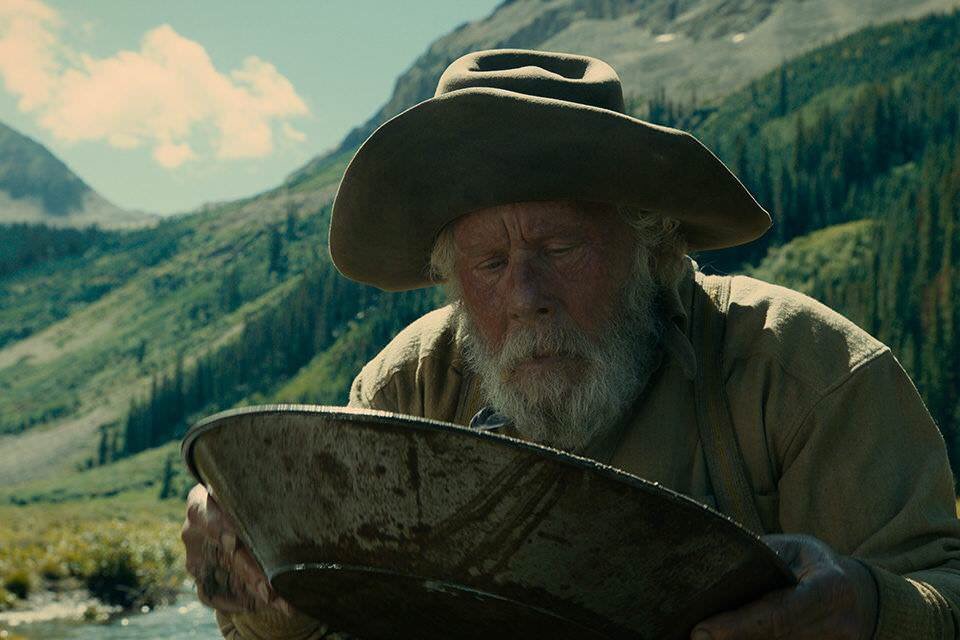 Tom Waits in ““All Gold Canyon”.

Does the real gold lie in the fourth chapter, “All Gold Canyon”?  Tom Waits is a lone prospector in a comely, picturesque valley.  (This is where the beautiful work of cinematographer Bruno Delbonnel shines brightest).  Bordering on pure procedural, the intricacies of the gold panning process are mined thoroughly and with great interest.  If anyone’s spent a lifetime mining the world for gold, so to speak, it’s Waits.  Is this really the raspy raconteur’s first time he’s worked with the Coens??  (Answer: Yes).  The full bodied quirk and curiosity Waits has embodied in his day job throughout the decades slides in perfectly with their aesthetic. At least, it does this time.  His performance is, as they commonly say, riveting.  Also, it’s never not believable.  We root for the old codger, so determined to finally strike it rich.  His fate can be debated, but that too is by design.

The “real gold”, though, all in all, is struck hard in chapter five, “The Gal Who Got Rattled”.  Zoe Kazan shines bright as the wounded but resigned Alice Longabaugh, a woman who finds herself widowed and lonely on an epic wagon train through an unending no man’s land.

Her interest in making the trip is purely financial, as her husband had lucrative dealings at the end of the line.   But it might just be the end of the line for all of them, considering the violent Native activity going on in the area.

Meanwhile, Alice’s husband’s yappy and permanently wound-up Jack Russell Terrier won’t shut up, its own energy running aggressively counter to that of the wagon train.  Everyone is at wit’s end.  It’s a silly problem by description, but a very real one nonetheless- what are they going to do, shoot the dog for being annoying?  Well… this is the Old West…  Indeed, this is where the Coens most loudly deny current day sensitivities (in terms of domestic animals and portrayals of Indians) in exchange for a frank look at frontier survival and a surprisingly sweet, strained chivalry.  (Bill Heck plays Billy Knapp, a young wagon master with gentlemanly eyes for Alice).  Anyhow, Jack Russell Terriers weren’t even widely bred in the United States until 1976, so one might be able to add “anachronism” to the pooch’s list of helpless transgressions.  (As though the Coen brothers care one hoot).

Looking at the subtle differences in wagon construction amid the uniformity of their off-white canvas covers is a treat for detail hounds.  Beyond that, it should be said that the raw authenticity achieved throughout the whole of Buster Scruggs is never more vital than it is in this chapter.  At no point in the whole thing, though, does the corrosive notion of “pretty actors playing dress-up” ever occur.

Zoe Kazan in the title part of “The Gal Who Got Rattled”.

Finally, a run-of-the-mill carriage ride takes on phantom-like proportions in “The Mortal Remains”.  Things take a turn for the eerie as the idle chatter of five strangers played by Tyne Daly, Brendan Gleeson, Jonjo O’Neill, Saul Rubinek and Chelcie Ross grows increasingly chilling.  One look at Daly’s stricken expression of lingering realization, and it’s not difficult to guess where things might be headed.  Not a horror story per se, though it could almost be one, “The Mortal Remains” is a smarter ending for the whole of Buster Scruggs than perhaps the opening chapter serves in its placement.

From the singin’ cowboy clopping through Monument Valley, to the hallowed trappings of the psychological Western, to the undenied need to transcendently shatter those those beloved myth machines, The Ballad of Buster Scruggs adoringly goes to all these places.  Like Peckinpah, it uses outrageous violence to remind us that behind the myth lies blood.  And no matter what, death.

O, Death- Won’t you spare us over til another year…?

When Netflix comes to the Coens with a manure cart of money and unlimited creative freedom to make a film for their in-home streaming service, what do the brothers do?  They indulge fully in six different aspects and angles of cinema’s most cinematic genre.  People today think Westerns are boring, or passé, or antiquated, or all of the above.  The Coens, as evidenced in their similar turn with 2016’s Hail, Caesar!, are unafraid to turn around and give contemporary audiences, at times, the actualization of their uninformed assumptions.  While not going as far as to eschew such tripe as white hat/black hat character allegiances, they do craft “Meal Ticket” and “The Mortal Remains” to be boring.  Not bad movie-boring; but rather, boring like church.  You may not be entertained, but you will be educated, enlightened, and heck, maybe even sanctified.  Because, why not?

All in all, The Ballad of Buster Scruggs is undeniably something special, perhaps even something important in this 2018 movie year.  More to the point, it’s something crazy.  It’s crazy that we wouldn’t have gotten it via conventional theatrical means, though the theater is, far and away, the ideal way to see it.  Buster Scruggs is the rare anthology film that’s not only good, but often essential; never smug.  And at all times, beautifully intriguing. 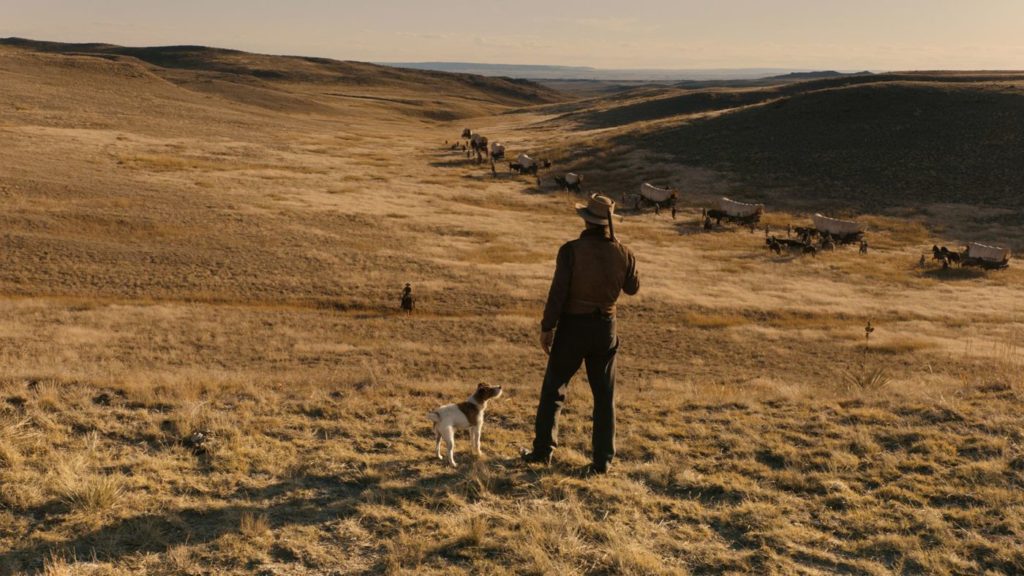