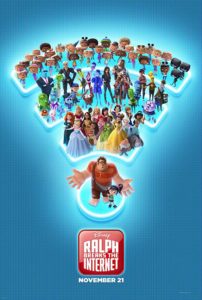 It doesn’t require a degreed act of  reverse engineering to wreck something, but Disney’s new sequel, Ralph Breaks the Internet, does a pretty systematic job of it.  The first film, 2012’s Wreck-It Ralph, proved to be a refreshingly layered and consistently hilarious look at belonging and fitting in.  The fact that it’s about video game characters (Ralph being a fictionalized retro arcade game bad guy who didn’t want to be the bad guy any more) was the novel hook that everything hung comfortably upon.  This long-awaited theatrical sequel, by contrast, isn’t ever sure what it’s about.  It’s something about insecurities, be they digital or personal.  (As both apply to the main characters, in this case).  But, Ralph Breaks the Internet is too many things, amounting to not enough.  Which, if nothing else, is at least often true of real-world internet experience.

Six years have also passed on screen.  All this time, Ralph (the voice of John C. Reilly) and Princess Vanellope (Sarah Silverman) have been loafing around the arcade game terminal (a power strip, same as it ever was) doing nothing in particular.  Vanellope, a racer at heart, is pretty bored with her own video game, “Sugar Rush”, these days, and all the hanging around in between rounds, but she also enjoys Ralph’s doofy company.  Then one day, a new plug is engaged, opening a new avenue to whatever lies beyond.  Hello, what’s this…?  A “modem…?”  It seems the owner of the arcade, a kindly old behind-the-times kinda guy, has decided to try out this thing called “the Internet”.  A cheap security guard appears at the new tunnel entrance, stringing up some caution tape and giving all the game characters a stern warning not to cross it.  Uh, okay…

Ralph Breaks the Internet, despite the years of evident brainstorming and conceptualizing behind the scenes, is an overly designed mess.

But then, due to an ill-hatched scheme by Ralph to make Vanellope’s game more exciting for her, the steering wheel on the real-world “Sugar Rush” console is broken.  Too obsolete to replace, it looks like it’s the end of the road for “Sugar Rush”.  But wait-! There’s a “Sugar Rush” steering wheel on eBay for $200!  That might be too expensive for the arcade owner, but if Ralph and Vanellope can slip passed the caution tape into this Internet they’ve heard of, they can then find “eBay”, and get the new steering wheel!  Soon enough, Ralph and Vanellope find themselves whisked away to a frightening, colorful, magical world that operates by its own rules.

Into the web they go

Then, there’s the matter of paying for the steering wheel.  How to earn quick money online then becomes the challenge.  Naturally, wackiness ensues.  Unfortunately, it’s wackiness of the contrived variety.  So, so many of the gags amount to nothing more than the bemused results of a quick, innocuous “wouldn’t it be funny if” brainstorming session.  Ralph makes a flurry of wacky viral videos!  He spoofs all our favorite YouTube sensations from five years ago!  Stern enforcers appear, their task to block pop-up ad vendors, which are personified and greasy street vendors.  Pinterest has a giant pushpin.  And, just to show that it’s not all arbitrary comedy fun, Ralph wanders into a comments section, and gets his feelings shattered.  Whereas co-director Rich Moore was fully able to mind the store alone with Wreck-It Ralph, here it takes not one but two directors to break this sequel.

Ralph Breaks the Internet does that thing where all the story and set up to a certain point is suddenly abandoned in favor of a sharp turn in a new direction.  In this case, there are also detours and distractions galore, wasting time.  (Again, true to the actual Internet…)

Several high profile movies (perhaps most notably, The Last Jedi), have taken flack for doing a far better version of this narrative swip-swap.  Never mind that tons of Simpsons episodes have spun comedy gold by employing this trick; this time, it feels more like a desperate swerve away from a creative dead end.  When all the easy, family-friendly internet jokes are exhausted, it’s time to shift into Obligatory Character Drama.  One can practically see the plot points pinned up on the Writer’s Room bulletin board.

As glitches were the issue in the first film, the stakes intensify this time to the level of “virus”.  The screenplay’s smart notion to embody the established insecurities of Ralph and Vanellope in the forms of actual viruses that threaten the entire world of cyberspace is one of the best creative ideas put forth.  But, like everything else that does work in Ralph Breaks the Internet, it comes along far too little too late.

As Disney itself empirically expands (today, even the 2012 Disney of the first Wreck-It Ralph seems cozy by comparison) its platform of savvy media gluttony and purely profit-driven depictions of inclusion and diversity, a film concept such as this one can’t help but feel strained between two worlds.  The honor of being immediately rendered as a “Walt Disney Animated Classic” requires a certain conservative timelessness that the zipping, ever-shifting Internet completely flies in the face of.  Granted, the filmmakers manage to squeeze more than enough firmly established universal web iconography (i.e., highly recognizable logos of sites such as Amazon, IMDb, Twitter, Instagram, and Google, to name just a few) to get by in the here and now.  But the required cleverness and subsequent execution of the whole “Internet city” concept, nevertheless can’t help but feel as dated as AOL discs and “the information superhighway”.

Ralph Breaks the Internet, by design, must be both familiar and innovative; both accessible and cutting edge.  Not to mention the expected resonating humor, lovable characters, and infusion of heart rending pathos, which are native to any Disney animated film.  That’s a long list, and it’s asking a lot– maybe more then has ever been asked of any such project from the studio- particularly one that has yet to fully embrace sequel-izing the way so many of its competitors (and adjoined studios) have.

Perhaps, then, it should be no wonder that the strain shows. Ralph Breaks the Internet, despite the years of evident brainstorming and conceptualizing behind the scenes, is an overly designed mess. Generic story beats fly on and off screen faster than a glazed-over teenager’s social media refreshes.  That this vision of cyberspace must be lively and cinematically appealing rather than realistically, inherently soul-sucking might be part of the problem.  (Though Ralph at one point does venture into the “Dark Web”, the need for this to be a completely family-friendly Internet can’t help but energize the necessary façade).

This Internet wonderland, a Ready Player One-style metropolis of websites and web activity, lurches along like the middle-aged white guy vision that it can’t help but being.  It’s the umpteenth clone of Ridley Scott’s Blade Runner world, but with immediately recognizable online logos everywhere.  Like Spielberg’s Ready Player One (released earlier this year), the simple appearance of any given known property (and there are many) is expected to impress.  Most audience members, however, don’t know or care that Disney lawyers might have spent up to six years negotiating a three-second on-screen Amazon logo, or what have you.

Likewise, in the spirit of the Date Movie/Epic Movie mold, the simple appearance of a known Disney character or property doesn’t constitute a joke.  We can say, “Congratulations, filmmakers- you’ve finally managed to cross pollinate all of Disney’s major holdings within a single movie experience”, but don’t expect us to laugh just because Eeyore shows up for a cameo.

What does work, and works better than anything else in the movie, is the much ballyhooed collaborative appearance of all the Disney Princess characters to date.  The scene arrives around the two-thirds point in the story- a long wait for real laughs.  But they do arrive, if only fleetingly- and voiced by their original actresses, wherever possible.  These ladies are to Ralph Breaks the Internet what the T-Rex is to Spielberg’s Jurassic Park.

When Vanellope has a wacky run-in with Groot from Marvel’s Guardians of the Galaxy (Marvel being one of Disney’s biggest holdings), the film’s meta thing backfires, as one is all too easily reminded that Disney axed Guardians director James Gunn after he had been crude and politically outspoken online, though Sarah Silverman, perpetrating the same things, gets by scott free.  (For the record, this critic is opposed to either of them being fired by Disney for these reasons; it’s the double standard that the film thrusts into our collective face).

In any case, The fact of the matter is that for two hours, we’re stuck in one of the most disappointing and singularly worst films that Walt Disney Animation has ever rendered- and with no refresh button.  John C. Reilly can and does act his way out of this like the extremely talented professional that is, but the monotony of it all still at times can’t help but get the better of him.  There’s almost nothing worse that a bored celebrity voice actor hamming their way through a mainstream family animated picture.  In this movie, new and old talent step up to the mic, with decidedly mixed results.  Allen Tudyk, formerly King Candy, recasted as a web search engine?  Sure.  Gal Gadot as a Grand Theft Auto-style gang leader?  Meh.  Sarah Silverman’s Vanellope and Taraji P. Henson’s web trafficker?  Nope.  This is a prime toxin that infects lesser studios like illumination, DreamWorks, and blue sky.  Disney can and should do better.

If there ever is a Wreck-It Ralph 3 (not we even needed this one), hopefully it will refresh several bits better.  As for Ralph Break the Internet, the whole digital file is corrupted with mediocrity.