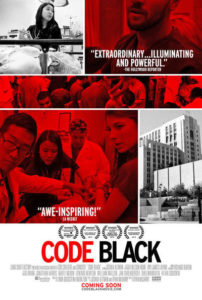 Code Black is the debut film from Dr. Ryan McGarry, who started filming as a first-year resident in L.A. County Hospital’s famous emergency room called “C-Booth”.  In addition to the 80-plus hour weeks he was putting in as a resident, McGarry was able to capture astonishing footage of the chaos of C-Booth and a narrative that helps explain to the audience, who most likely have experienced the frustration of waiting hours upon hours in an ER, the perspective of the doctor who is working in that ER trying to help save lives.

McGarry has assembled interviews from other doctors in the residency program that share their idealism of changing the system, saving lives, and making a difference with the reality of operating amongst the soul-crushing bureaucratic jungle put in place by well-meaning politicians, review boards, and oversight agencies.  We also get the perspective of long-serving nursing staff as well as hospital administrators to truly understand the difficulty they have operating within this system.

The film begins in C-Booth at the old L.A. County Hospital.  In a 20×25 foot room, the modern idea of an emergency was born here.  With such a small space, there is no real privacy, but there is an abundance of personal all working as a collective team on the constant stream of patients who are streaming in.  Grandfathered in, C-Booth is exempt from many of the HIPAA rules regarding privacy, as it would be impossible to comply with in such a small space that has seen the most deaths, and conversely the most lives saved of any ER in the country.

It is here that the film pulsates with a beat that will earn those in the medical profession a new found respect as the chaos of multiple life-or-death moments are happening with every decision being made.  It is also here that the 4th-year senior resident students are in charge, overseeing their fellow junior residents.  There are senior doctors in place to make sure the right decisions are being made, but this is a place of innovation where the patient comes first because they are instantly right in front of the staff from the moment they are brought in.  Doctors who come out of medical school with the “save-the-world” idealism are richly rewarded in this environment and they are learning new techniques constantly, or innovating them, because of the sheer volume of patients, and limited amounts of time in which to save their lives. 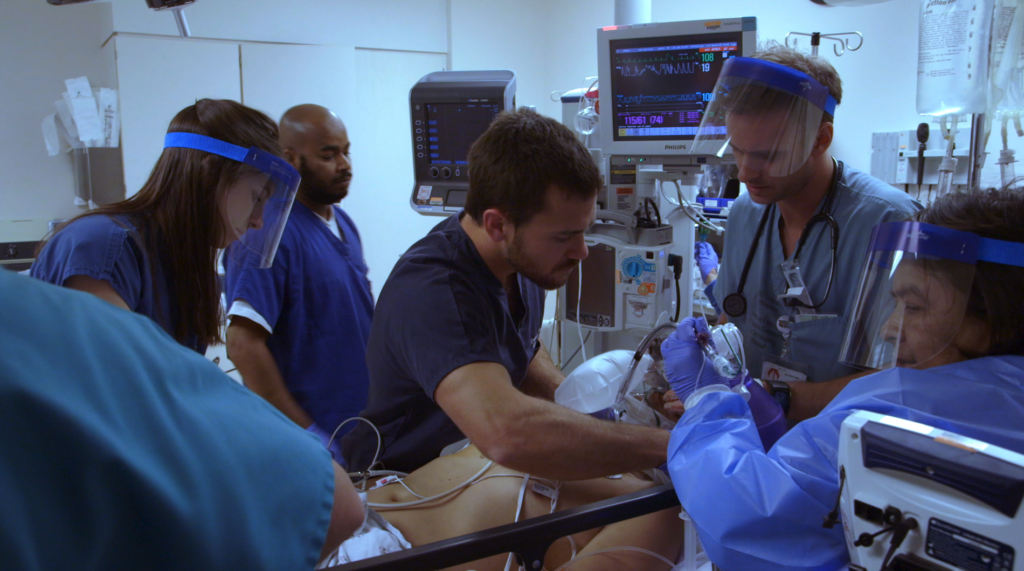 Each resident is also expected to serve one year of their residency somewhere else.  Dr. McGarry, while serving somewhere else, recounts that this is also when L.A. County Hospital was found to not be in compliance with new earthquake codes in California.  During his year away, the old L.A. County Hospital was shutdown and moved into a new building nearby.  When he returns, along with the other residents of his program and film, it is in the new digs.  The new hospital ER is no longer the chaos of C-Booth but is a modern hospital, with modern design and in compliance with HIPAA and other regulations.  Therefore, things that they didn’t do before were now expected, and it is with this move from the old system to the new system that the film is able to encapsulate what might be wrong with our healthcare system.

Patients now wait on average over 18 hours to be seen.  This level of wait time, staff shortages, and constant stream of patients is referred to as Code Black.  This is the new norm.  Now, patients are checked into a computer system and assigned a number based on the severity of their ailment.  Doctors do not see the patients immediately like at C-Booth and are forced to make judgements on who to see next based on a name and a number on a computer screen.  Before seeing a client they must have certain forms filled out in advance, and before they can begin to prep the patient for any treatment they must have paperwork completed.  You see the shift in these young doctors, who had an adrenalin rush every night at C-Booth of actually accomplishing their idealistic pursuits on a nightly basis, succumb to the reality of the modern healthcare system. 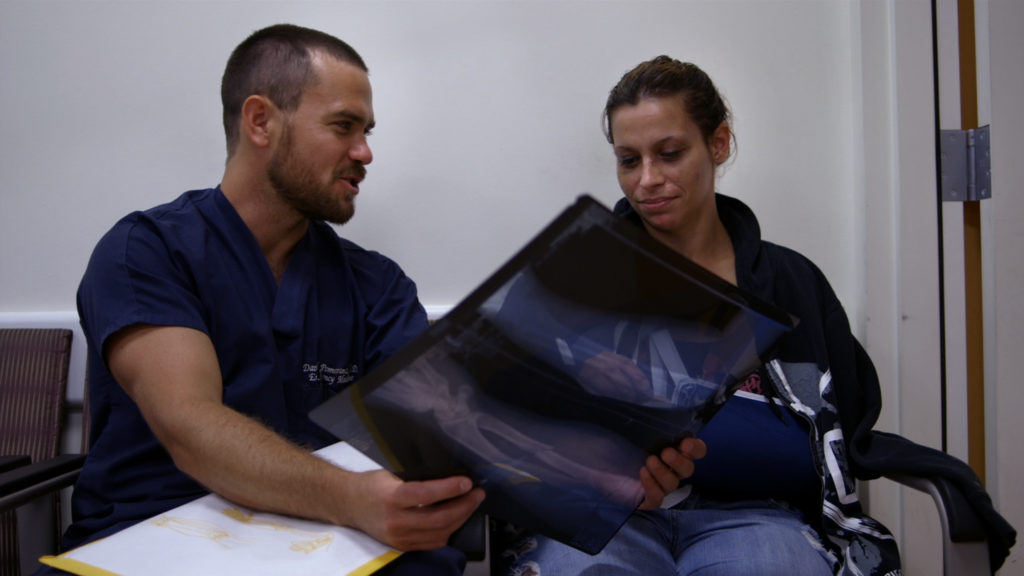 McGarry as a director at one point weaves in a section of raw, uncut footage with no sound just to capture who the patients really are allowing the audience to see their faces, their pain, and their frustration of waiting in a room and never seeing anyone.

We see how these young doctors attempt to innovate and get back to the closer doctor-patient interaction that existed at C-Booth.  For a while it works and brings wait times down from 18 hours to nearly 8 hours.  But the reality of political bureaucracy kicks in as hospital administrators have to close sections of the hospital to meet budget and reallocate staff.  Public hospitals, like L.A. County Hospital, make up only 2% of all hospitals we learn, but train 1 in 5 doctors around the country and meet the needs of 20% of the population seeking help.  Because it is public, it must compete for funds with every other entity in the county of L.A. including schools, and other city services.  There is only so much to go around and each decision in the county board affects what the hospital administrator has to work with.  You also have the issue of it being a tax-payer funded venture, so many doctors opt for private practice where the money is better.  So do the nurses.  This leaves a shortage in a place where more staff is needed, and since there isn’t enough money to fund these positions, they are working short staffed on a nightly basis. 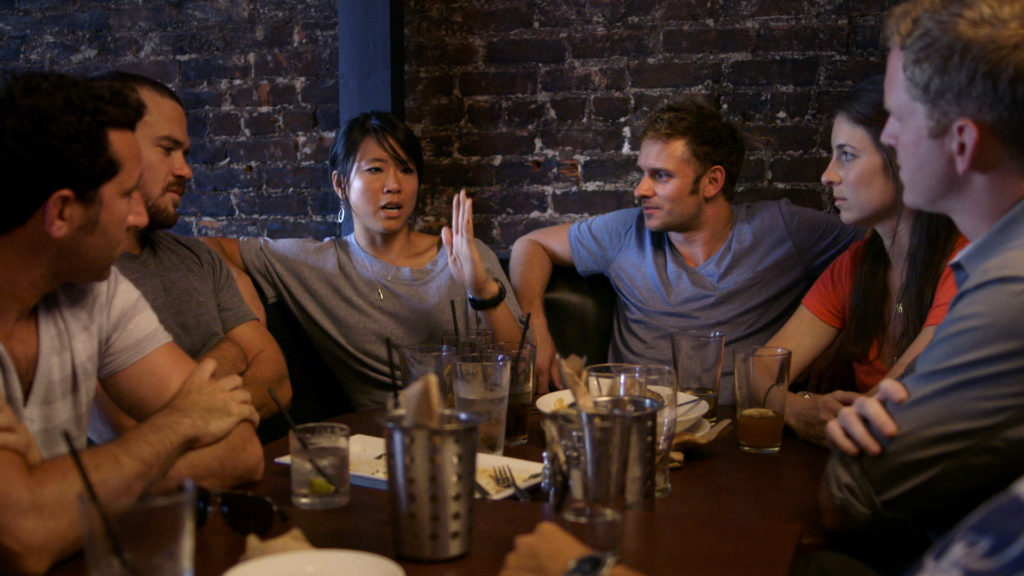 Code Black tries to stay above the political arguments of democrats and republicans and simply show that doctors long to interact and work with their patients directly but are kept from doing so by so many regulations and legal hurdles that are well-meaning but prohibitive.  Doctors are now forced to make decisions and chart their patients in a way that protects them in the case of a future lawsuit rather than the best course of action at the moment.  They call it a defensive posture to their job where before, they were on offense.

Code Black itself is innovative as it puts you into the action at times, capturing the sights, sounds, and rapid nature of the ER rather than just an informative documentary “about” the ER.  It also is not as crisp as some other documentaries, but can be forgiven with a first time filmmaker who was trained to be a doctor, not a documentarian.  That being said, Dr. McGarry has assembled a great team of experienced producers who help create a solid and engaging debut. This film opens today at Sundance Theaters, and was awarded the winner of best documentary feature at the Los Angeles Film Festival, Hamptons International Film Festival.  It also won audience and people’s choice awards at the Aspen FilmFest and Starz Denver Film Festival.