A WRINKLE IN TIME – Film Review 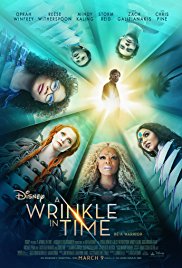 In the making of any film, there are problems that are avoidable, and problems that are unavoidable. When a bevy of both types of problems lands full-thud onto a prominent film project that is also a highly anticipated adaptation of a decades-popular book, the cumulative negativity is more than a wrinkle; it’s a rupture in the perceived bonds between artist and audience, rights holder and fans, and movie studio and the general public.

With Disney’s latest Disneyfication, Madeleine L’Engle’s 1962 fantasy/spiritual allegory and Newberry Award winner, A Wrinkle in Time, shepherded by and starring no less than the all-powerful Oprah Winfrey, there’s plenty of blame to go around. This candy colored bad trip of a children’s film thematically distorts and distills the fundamental ideas of L’Engle’s novel while simultaneously being an awkward and disjointed film at least eighty percent of the time.

The truly weirder A Wrinkle in Time gets, the better it gets. Too bad it fails to shut up or back off long enough to embrace such weirdness for longer than twenty or so minutes.

In 2004, there was an art installation in St. Louis. It was dubbed “Big Oprah”, as its central feature was a massive, distorted print of the face of Oprah Winfrey. Accompanying the image was a sensory-assaulting barrage of noise from The Oprah Winfrey Show, primarily the instantly infamous car giveaway episode. The installation presented Winfrey as nothing more or less than a demagogue, her audience a hungry horde of followers weaned on female-centric affirmations and platitudes. It was quite possibly the height of Winfrey’s still-substantial culture powers, a talk show sliding into being a vehicle for its own humanistic quasi-religion. The installation was quite apt, timely and true. And I’m not just saying that because the artist is my wife. 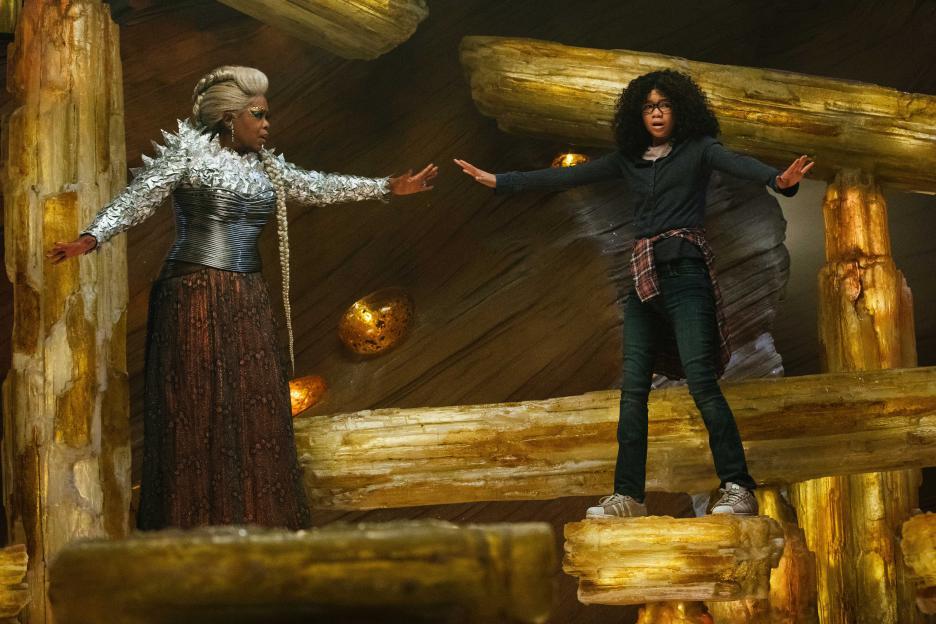 My wife holds several books very dear, one of those being A Wrinkle in Time. Our ten year old daughter has followed suit, transported fully by the vivid time/space traversing of tween protagonist Meg Murry and her desperate supernatural search for her disappeared father. The beloved book (also, in certain Christian fundamentalist circles, a controversial one) having finally been adapted into a major motion picture ought to be cause for celebration. In lieu of a faithful adaptation, though, we are instead met with the return of Big Oprah – this time, an even more literal representation.

Director Ava DuVernay’s A Wrinkle in Time is both a Candy Crush swirl of lollipop saturation and a Return to Oz-style dread-inducing trip far from home. That generalization probably makes it sound more promising than it is. Saddled with the clunkiest first half of any movie this decade, A Wrinkle in Time is nothing less than a shambles. It might even be a desecration; I’ll leave that judgement to fans of the book. (My wife, having not hated a movie this much in a long time, says yes it is; our daughter, on the other hand, sees the differences but appreciates the movie). With the financial and physical face of Oprah behind it, DuVernay sees fit to replace the Christian bedrock of the source novel with a message of being your own best self. As one friend put it, it would be like a Narnia adaptation replacing Aslan with the notion finding your inner Aslan. Would the staunchly opinionated L’Engle have approved of this treatment? Almost assuredly not.

It’s been four years since young Meg Murry (a competent Storm Reid) and her little brother Charles Wallace (Deric McCabe) suddenly lost their amazing father (Chris Pine, nailing another idealized male role). His vanishing has not only been a source of personal and familial trauma, but it’s the basis for Meg getting bullied at school. (An absentee Dad probably had more sound resonance as schoolyard ostracizing material in 1962 than 2018, but no matter…). Why did he leave? Where did he go? Why would such a cool guy do such a thing? Everywhere Meg and Charles Wallace go, it’s all anyone else is talking about. (No exaggeration – it really is all anyone else talks about).

Then, a trio of colorful intergalactic witches slowly hit the scene; first among them a gratingly dithery Reese Witherspoon as Mrs. Whatsit, then a bland-despite-her-wacky-wardrobe and dialogue Mindy Kaling as Mrs. Who, and finally, Oprah herself – stoic, glittery, and thirty feet tall – as the wizened and benevolent Mrs. Which. These witches take the kids, and their well-meaning friend Calvin (Levi Miller), across the universe (wouldn’t “A Wrinkle in Space” have been a more accurate title?) on a high stakes mission to recover their father, who has gone lost within a bizarre planet/dimension called “IT”, that’s overrun with pure evil. 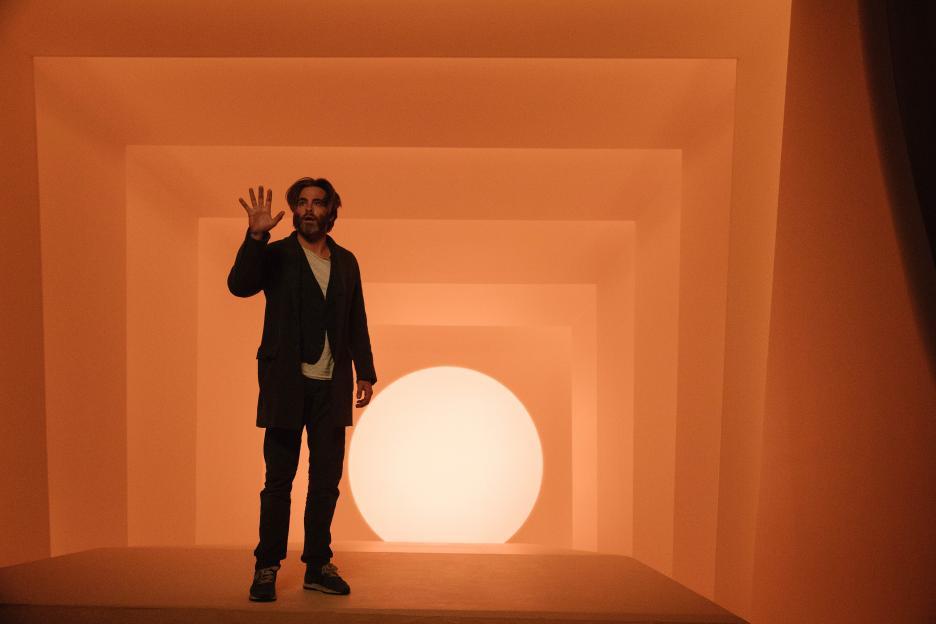 In a movie that’s painfully overwrought with barely-baked exposition, universalist platitudes, and a torrent of generic affirmations, the cryptic and scary lead-up to the climax comes as a welcome relief; the only effective portion of the movie. The truly weirder A Wrinkle in Time gets, the better it gets. Too bad it fails to shut up or back off long enough to embrace such weirdness for longer than twenty or so minutes.

As was the case in DuVernay’s 2014 film Selma, her particular consistently inconsistent visual style proves to be far more of a hinderance than an artistic compliment to the story. Though she’s been hailed early and often as a unique and barrier-busting visionary, the director’s penchant for unbalanced framing, erratic shot lengths, and unmotivated disregard for age-old rules of spacial relations in film make for a fundamentally uneasy moviewatching experience. In the case of A Wrinkle in Time, a movie celebrated as the first $100 million-plus budgeted film helmed by a woman of color, there are conspicuously extraneous layers of schmaltz, gaudiness, and narrative strain.

For long stretches of time, the witches disappear from the movie, leaving the child actors to carry what they can of this head scratcher of a film. While their acting, and acting in general, is not the problem, Reese Witherspoon’s Mrs. Whatsit is a grating bundle of manufactured giddiness. That performance aside, DuVernay gets solid-to-passable work out of everyone else, most impressively the young Derik McCabe as Charles Wallace. The younger brother character is a major role that asks a lot of whomever were to play him. Yes Mr. McCabe, we’ll be watching your career with great interest… 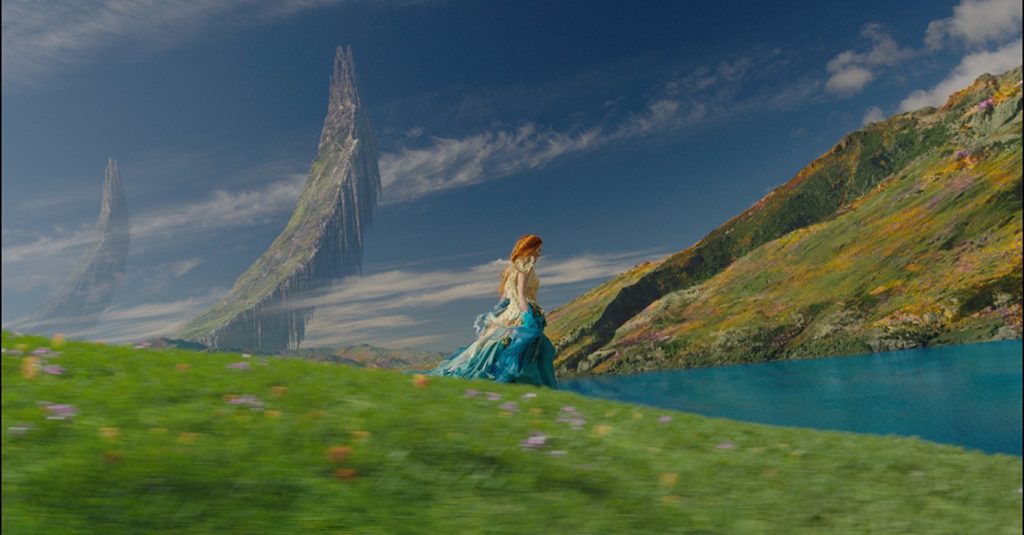 My only prior association with A Wrinkle in Time is my repeated noticing of the book’s cover, a fantastically lucid fantasy illustration of a bursting alien centaur amid far-out sliver planets. Any such flair – or even any such alien centaur – is 100% absent in DuVernay’s film. There is, however, an embarrassing looking flying Ferngully creature for one scene. Evoking everything from Telletubbies to The Neon Demon, and playing like a glorified 1970’s Witch Mountain-era live-action Disney offering, there’s more than one wrinkle in this improperly humanistic adaptation.

Between Disney’s penchant for generic reductiveness when it comes to most things spiritual, as well as the obvious hands-off approach of L’Engle’s estate (for whatever reason), it’s easy to see how a director of limited experience such as DuVernay and her team could be engulfed in darkness without even realizing it. But, through it all, the looming presence of Big Oprah is the most impossible to ignore. This film, however, won’t be. For all of Oprah’s dominance on the small screen and in various print mediums, she’s yet to parlay that level of success to her big screen efforts, much less across space and time. In this case, the engulfing darkness of bad art and ham-fisted messaging sadly snuffs out the bland positivity of self affirmation.