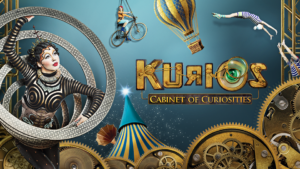 While most of my reviews involve film, I was recently given the opportunity to attend the opening night of Cirque du Soleil’s latest traveling show, Kurios, being held under the big top at a local raceway.  Like film, Cirque du Soleil relies on telling a story through visual arts.  While narrative and character arcs in such a performance are more fluid than those in a film, many similar things must come together to make it all work.

Writer and Director Michel Laprise has put together a story meant to challenge all of us to grasp the lofty notion that anything is possible.  Kurios tells the story of an inventor seeking to defy the laws of time, space, and dimension, and as a result, he ends of reinventing everything around him.

Cirque du Soliel’s Kurios brings back the notion of wonder, curiosity, and the idea that anything is possible.  Like early cinema, the worlds that it creates imbues the audience with a childlike wonder that will remain long after the show is over. 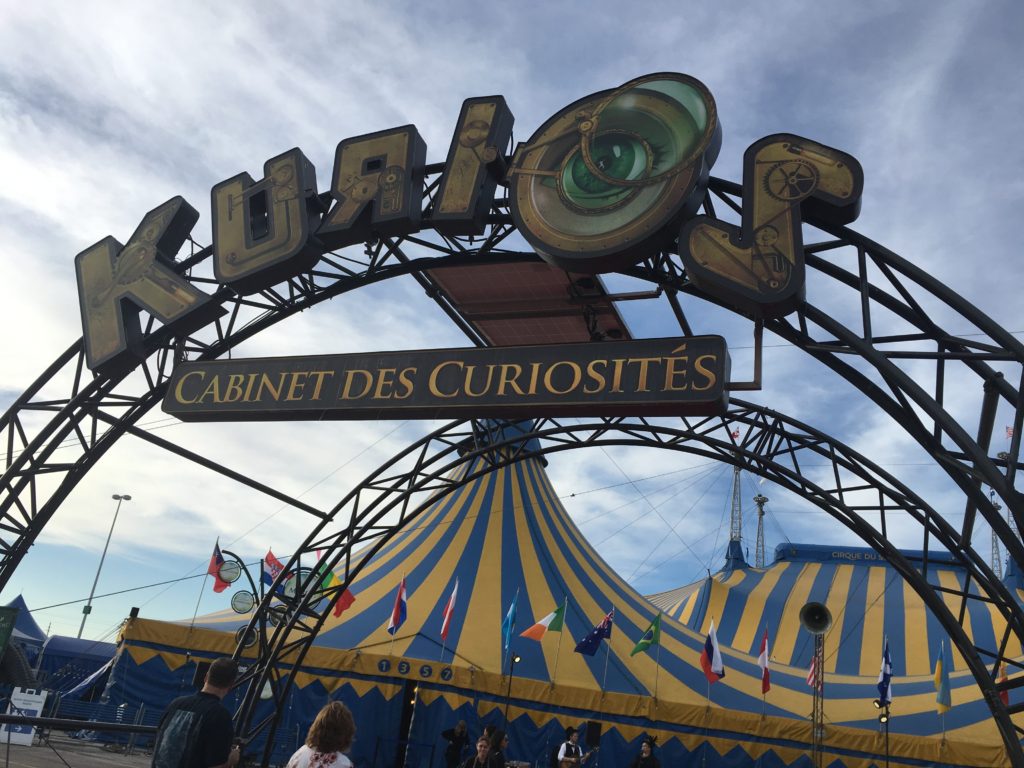 As I approached the giant circus tent, along with my daughter, we were greeted by many performers.  Some were on stilts, others dressed in sort of a Classic French/Steampunk-inspired look.  Before being let into the giant tent, other performers began appearing at the top of the tent, performing hundreds of feet in the air, cascading down the side of the big top.  All of this against the singing and guitar playing of a French folk duo, creating a 19th century European mood. 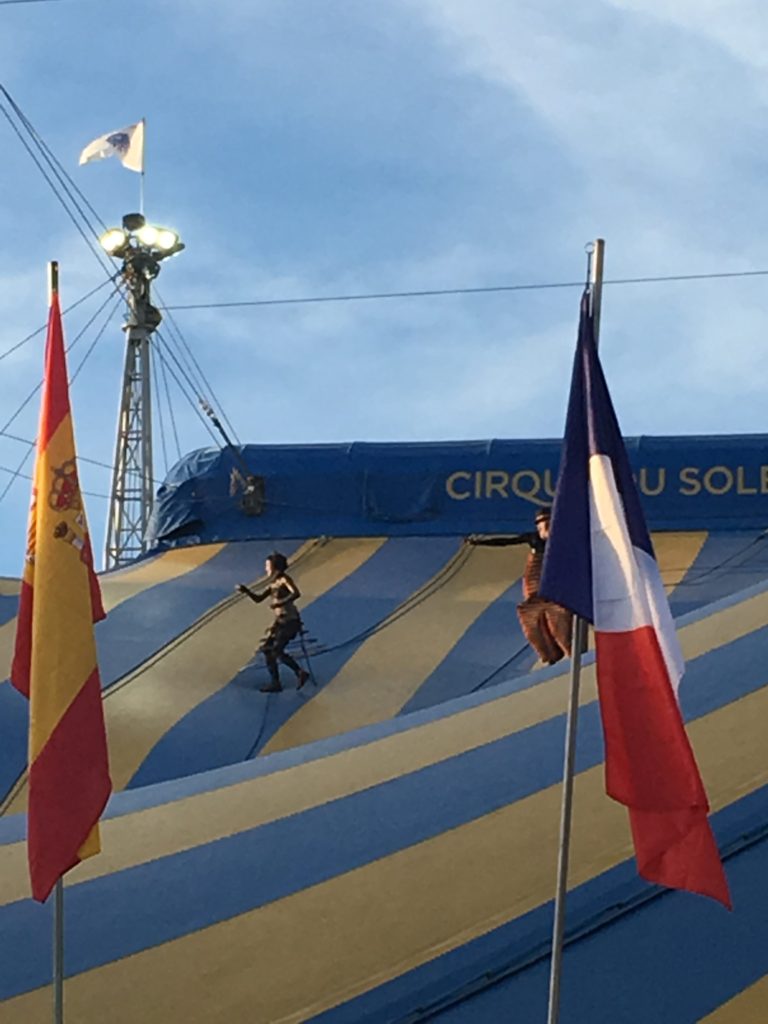 Inside the tent, like other Cirque du Soleil shows, the stage was set and just before show time, characters of the show began coming out doing small entertaining bits to get the crowd ready.  Eventually, the lights came down in the house, and the spotlight took center stage. 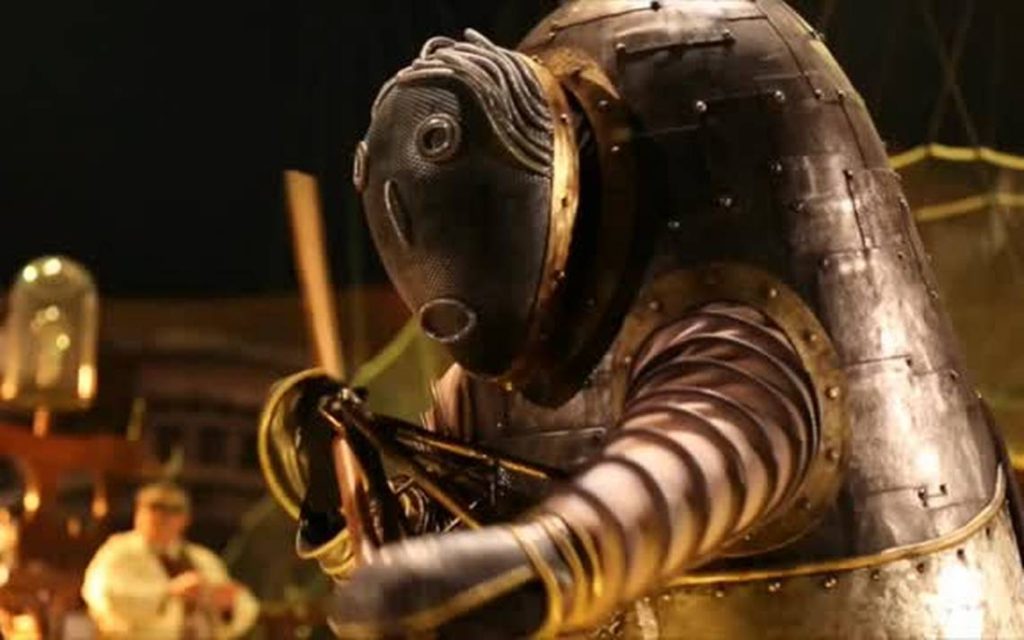 To say that the show is impressive would be an understatement.  While the performances feature the amazing skills we have come to love in other Cirque du Soleil shows, Kurios uniquely blends an array of imaginative costumes, music, and death defying stunts to bring this world alive.  The costumes feature many hybrid forms and oversized shapes to create unique characters that populate this strange world.

As a tribute to the great film director George Méliès, who was featured in Martin Scorsese’s Hugo, an acro-net act features performers in costumes inspired by how Méliès envisioned Martians, complete with fins, scales, and fishtails.  As they flew through the air, the stage gave the illusion of being “under the sea”.

Contortionists, rola bola specialists, arial bicyclists, yo-yo’s, ariel performances featuring actors strapped together, are just some of the amazing performances you will see.  A Russian “cradle-duo” are dressed in costumes meant to be a tribute to the world famous Fabergè eggs.  All of the costumes, set pieces and staging is inspired by the start of the industrial revolution and nods its head towards many of the great inventions such as the steam engine, the gramophone, typewriter, and even the light bulb are featured, creating a classic, yet modern aesthetic to complement the narrative and performances. 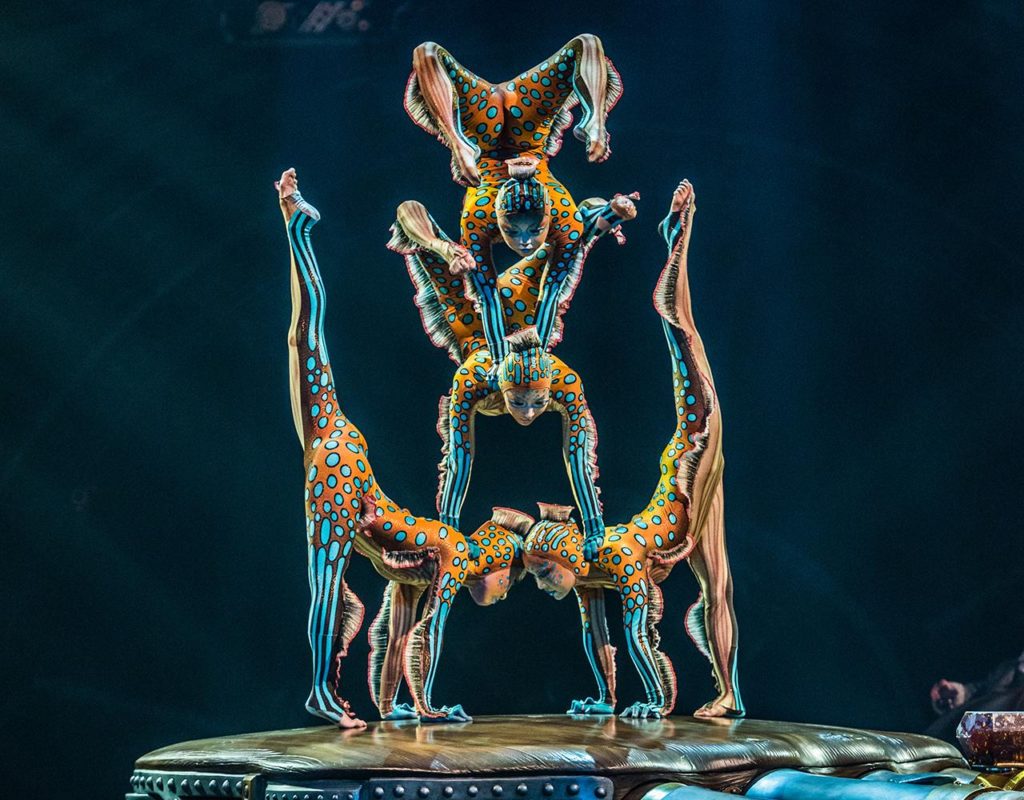 The most impressive act featured a dinner table gathering where slowly but surely the dinner guests begin building upwards by stacking their dinner chairs straight into the air where a man balancing in all sorts of contorted positions on top of the structure shows no fear.  It reaches an impressive height which would have been more than enough spectacle until you see that at the top of center stage is an identical table and guests to those on the stage, only suspended at the top of the tent, and upside down.  As they replicate the building and balancing act we just witnessed, they are doing so while inverted and working their way down towards the stage while the original performers build up towards them. 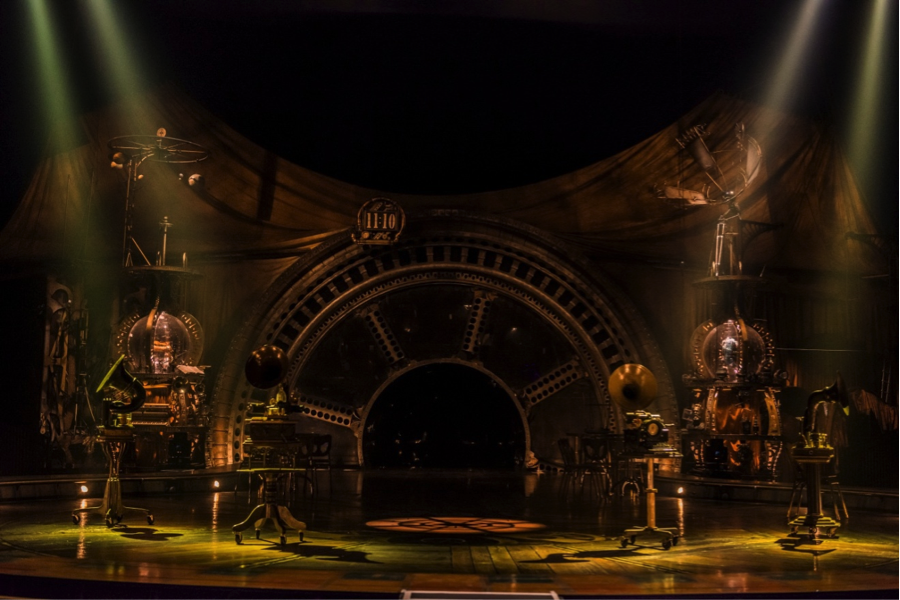 Finally, what was most impressive about Kurios is the way in which they integrate music.  Live musicians and singers are featured within the acts themselves, providing the emotional components, transitions, and musical cues for the performers to react to.  Playing live, in character, while integrating it all into what is happening around them with the stunting, and blocking, is a feat unto itself.  Many of the songs are sung in French against the backdrop of opera, rock, industrial, classical, and electronic music.

Cirque du Soliel’s Kurios brings back the notion of wonder, curiosity, and the idea that anything is possible.  Like early cinema, the worlds that it creates imbues the audience with a childlike wonder that will remain long after the show is over.  While Kurios is obviously inspired by cinema, who continues to create worlds never experienced before, there is something about seeing something bigger than life being performed for real without all of the digital wizardry that too often fills our modern films.  This show is for all ages, and runs until May 21, 2017 for all of those who are….Kurios. 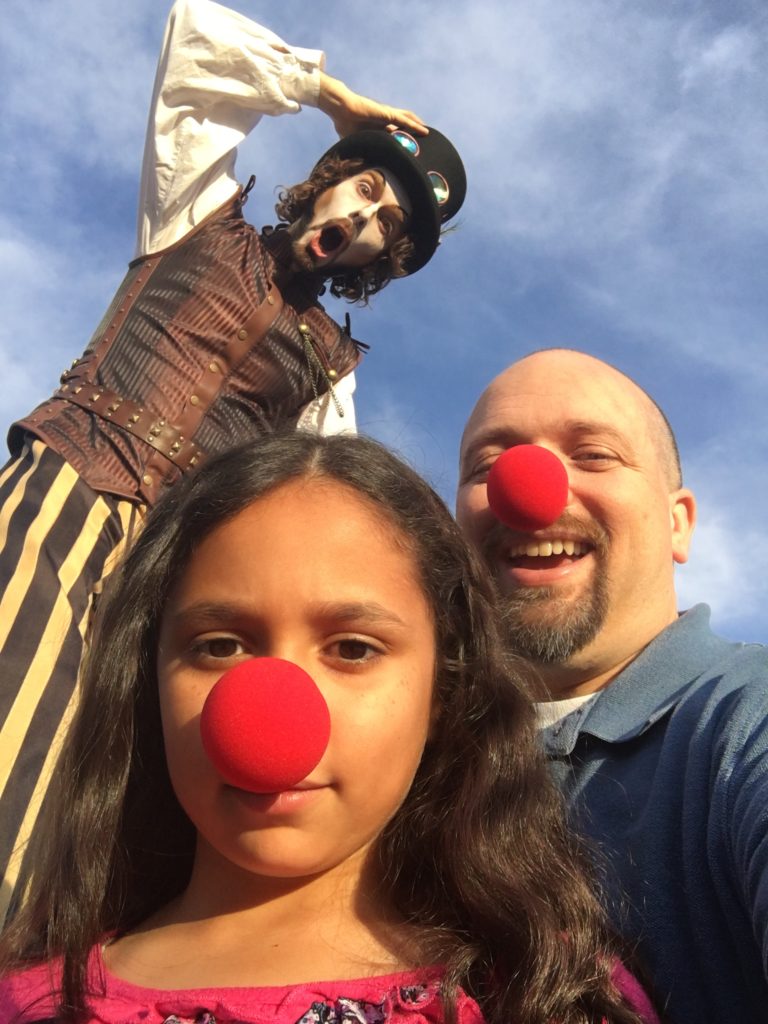