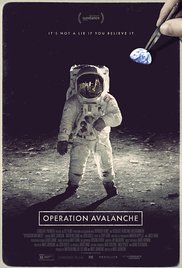 When you choose to do something that is hard, be sure to have an endgame to the plan. If Operation Avalanche has a primary takeaway, it must be that. Too bad it’s unintentional.

Making movies is hard. Even people who have never attempted it know this to be true.

Also true: On July 20, 1969, in a tremendous effort of nationalist wherewithal and scientific bravado, United States astronauts Neil Armstrong and Edwin “Buzz” Aldrin landed their lunar Eagle on the surface of the moon. After twenty-one and a half hours of exploration, they flew back home. This, we must admit, was even harder.

But what if… just what if… it was too hard? What if the landing that the world saw was actually some sort of phony stage production, manufactured to give Americans false hope, and trick the Soviets into thinking that they’d been beaten in the space race? 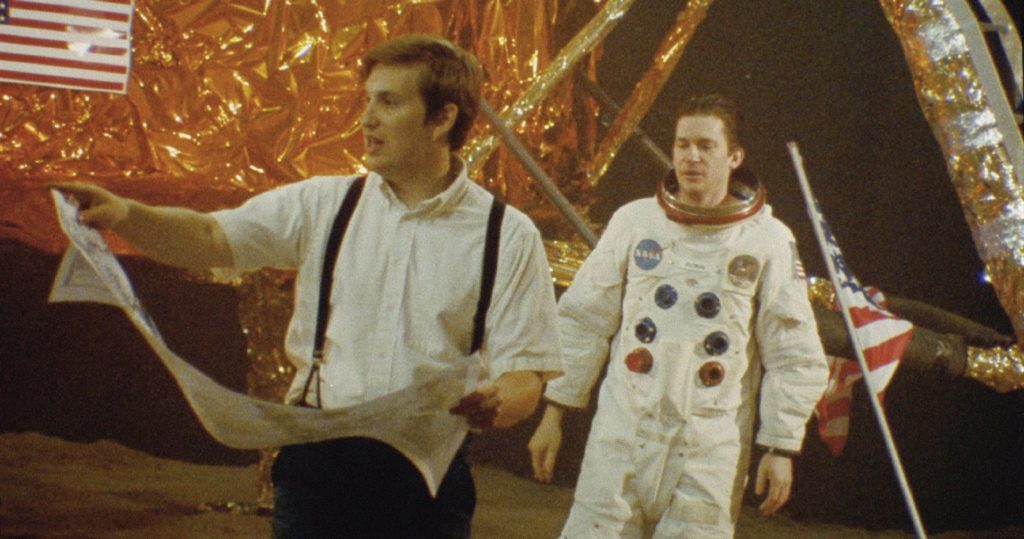 If that were the case, how could it have been pulled off? Filmmaker and lead actor Matt Johnson lands his craft into the big time to answer that very question with his fictionalized “found footage” comedy thriller, named after the top secret mission to fake the moon landing that his character eventually carries out.

The film goes the distance with it’s own period-accurate production values, replete with authentic 1960s décor, clothing and vehicles. For a while, it’s the fun romp we were hoping for. But, it couldn’t stay such a thing.

Taking a page from The Blair Witch Project, Johnson goes by his own name in the movie, playing a fictionalized version of himself. Through the course of the 1960s, we watch as he and his cohort Owen Williams (also playing himself, sort of) climb the ranks as meager government film documentors to eventually producing the Apollo 11 moon landing in a studio. They visit Stanley Kubrick on the set of 2001: A Space Odyssey for production tips. The gee-whiz quality grafted onto this portion feels more forced than it should, but it’s not a chore to watch. It’s the fun part.

Once July 21, 1969 has come and gone, Johnson and Williams’ story isn’t over. They become hunted by their employers, fugitives on the run from The Man who wants them gone. At this point, the tone of the film has turned naturally dark. Desperate chases, paranoia, and a doomed feeling take over. Which makes this the inevitable point that comes in all found footage movies wherein we ask ourselves, “Why are the characters still filming this?” Never mind that…! America is a fraud, and this is the thanks our protagonists get for trying to say otherwise. No, nothing is ever easy. 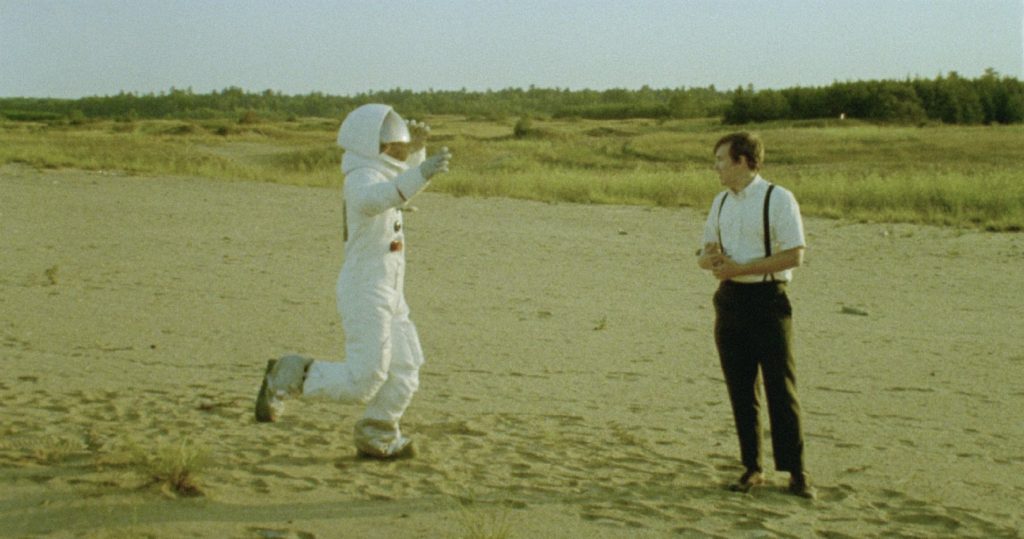 So said President John F. Kennedy in an iconic speech given to a stadium crowd on September 12, 1961. Kennedy’s speech is said to have ignited a fire of near-panic at NASA and in the scientific community. Suddenly, they had a clear-cut mission – a presidential mandate – and one of the most ambitious in human history: Land men on the moon, then bring them safely back to Earth. And it had to happen by the end of the 1960s. Never mind that such an endeavor might’ve been decades of progress into the future – If the president said it, they’d darn well better make it happen. It was a golden age of unyielding optimism and loyalty to our elected officials. At least, by comparison. 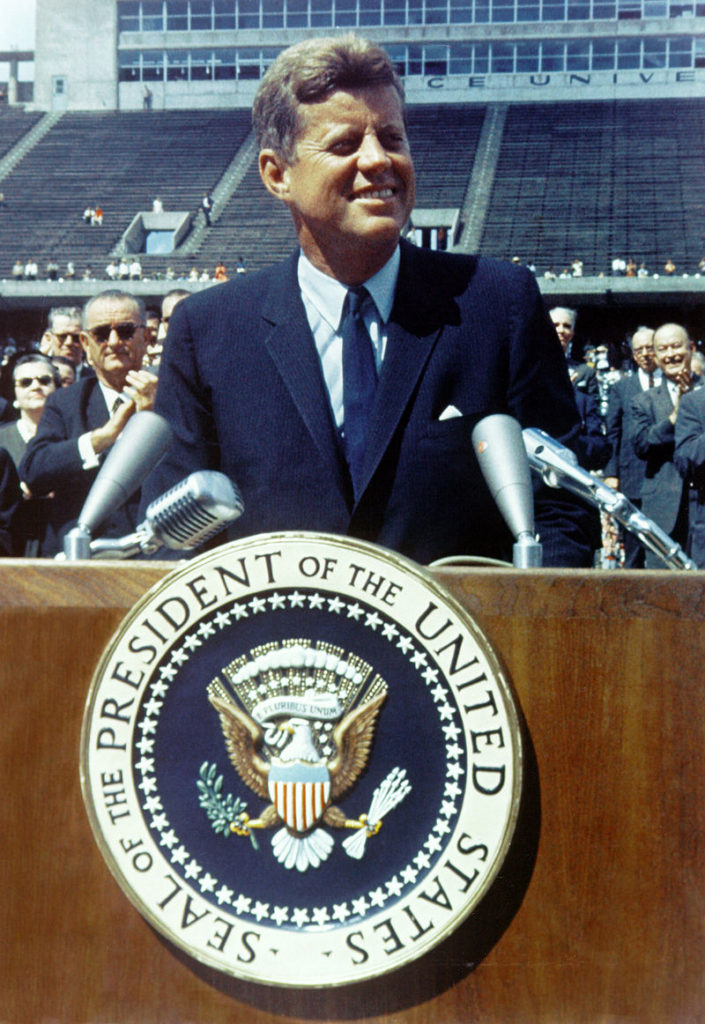 Such patriotically steeped idealism is utterly lost today, antiquated and distant. Case in point, when President George W. Bush made a similar claim late in his presidency about the U.S. landing on Mars, the establishment response was basically an eye-roll and a droll “Uh, no. We’re not going to Mars. At least, not because you say so.”

By Kennedy’s rationale, Mars may’ve been among a list of unspoken “other things” we, the U.S., could choose to do. But, clearly, it’s too hard. The age of “bending time” and forcing science just because a president says we should is gone.

The grand missed opportunity of Operation Avalanche is its failure to ask questions about this shift. The film goes the distance with it’s own period-accurate production values, replete with authentic 1960s décor, clothing and vehicles. For a while, it’s the fun romp we were hoping for. But, it couldn’t stay such a thing. Instead, it crumbles to the inevitable conclusion that if what they’re up to were real, and America is a fraud, that’s not exactly funny. It’s a storytelling catch-22: By wallowing in its own initially enticing premise, Johnson’s story leads only to inevitable cynicism.

The problem then becomes that the legitimate cynicism extinguishes the fun spirit of the initial conspiratorial “what if” premise, leaving anyone to wonder why they’re still watching this tonally free-floating movie. It’s as though the filmmakers didn’t realize that this is where they had to be headed. Did they really leave the launchpad without a map? In their depicted era of the 1960s, the movie Dr. Strangelove successfully managed the very hard task of treading a similarly fine tonal line between dark comedy and deadly serious political matters. But Operation Avalanche, terrible title and all, is no Dr. Strangelove. Maybe Matt Johnson should’ve spent more time with Stanley Kubrick.