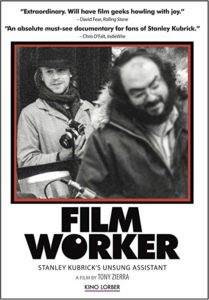 The cinema of Stanley Kubrick stands, rightly, as a monolith among the myriad of millions of other motion pictures.  Leon Vitali, a British actor who scored a key role in the filmmaker’s 1975 epic Barry Lyndon, knew this fully.

The acting career of Leon Vitali is all but forgotten; a briefly promising beacon forever endangered by the greater luminosity of the ever-flickering 35mm commercial projector lamps of the world.  In a blaze of radically acutely contrarian movie star clarity, Leon Vitali knew this, also.

Formerly an actor on a very promising career trajectory, Vitali willingly and gladly threw all of that away in order to become the full time personal assistant to Stanley Kubrick (2001: A Space Odyssey, A Clockwork Orange, The Shining).  What began for him with acting in Barry Lyndon sprawled into a lifetime of cinema-related servitude to one of filmdom’s most celebrated obsessive geniuses.

Vitali’s stories, many unshared until now, are delivered in the spirit of grateful curator, never the martyr.  Yet, one look at the man can’t help but reveal otherwise.

To label Vitali a mere “personal assistant”, though, is a gross understatement.  In the industry sense, where that job title tends to mean laundry and coffee duty, Vitali did- and still does- it all.  This has included overseeing quality control for new prints and transfers of Kubrick’s films, maintaining Kubrick’s meticulous archive, heavy involvement with editing, running point with the press, logging lighting setups during film shoots (Kubrick didn’t trust his crew to always log things accurately), and who knows what else.  Sometimes, he’d still score a small role in the movies themselves, his most notable of this phase being the masked “Red Cloak” master of ceremonies in Eyed Wide Shut. 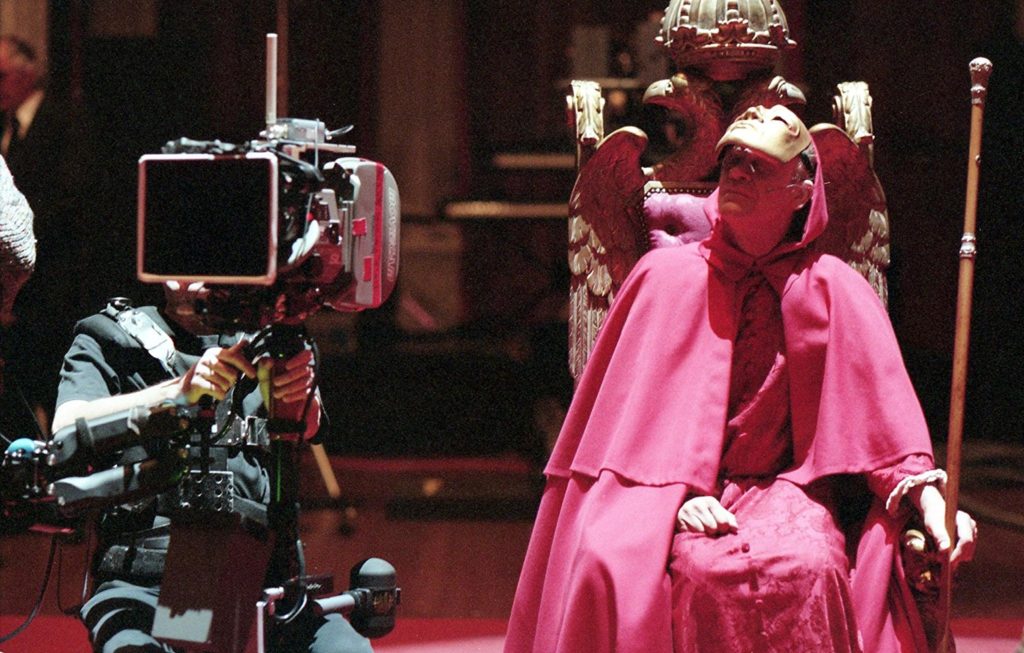 The resonant success of Filmworker, Tony Zierra’s documentary about Vitali, is how it grapples to reconcile its subject’s willing, utter servitude with the toll it has obviously taken on his life.  The many sides of Kubrick are depicted unsparingly throughout the film, including his unrelentingly demanding nature as a 24/7 taskmaster.  The most unflattering of animation details Vitali’s recollections of Kubrick as an omnipresent horror show, mercilessly inflicting exhaustion and nervousness to all in his inner circle.  Filmworker is completely secure in its knowledge of the director security as lionized for all time.  Nothing this documentary could or does reveal can besmirch that, nor does it betray methods we don’t already know of.  Honorably, it’s no one’s goal, Vitali’s or Zierra’s, to “shine a light” or “expose” Stanley Kubrick as some sort of monster.  Vitali’s stories, many unshared until now, are delivered in the spirit of grateful curator, never the martyr.  Yet, one look at the man can’t help but reveal otherwise.

The physical toll that this all-consuming occupation has had on Vitali is impossible not to notice.  His body may now be withered, wrinkled and resembling a hungry Keith Richards in both personal fashion and demeanor, but his generous soul, so this film tells us, shines on.  Even when utterly snubbed and left out of important occasions, such as a recent major Kubrick exhibit hosted by the Motion Picture Academy of Arts and Sciences, in which Vitali wasn’t consulted nor invited.  And yet, he is said to have enthusiastically attended at least thirty times, commonly giving his own guided tour of a lifetime to whomever he brought along. 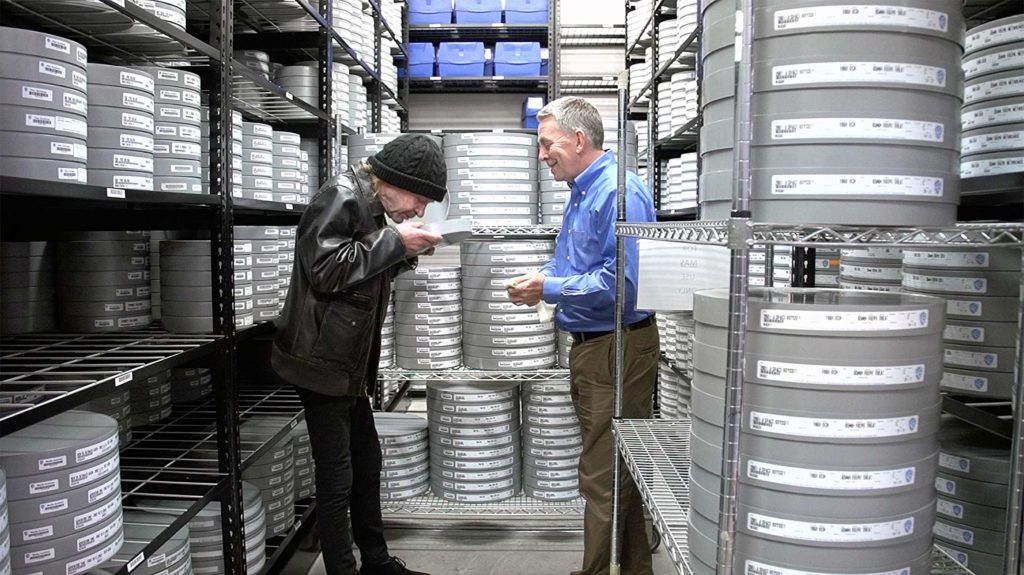 Vitali, checking the quality of a film print.

Though Kubrick has now been gone for nearly twenty years, we’re no less obsessive about him than when he was alive.  This is fitting for a man who built his legacy upon his own unerringly precise “Kubrickian” nature, a term recently made all the more official by the Merriam-Webster Dictionary (“Think: irony, emotional aloofness, deliberate pacing”).  Though his filmography is not vast in quantity, it resides among the absolute vastest in all of cinema.  How else to explain the evergreen quality of a body of work that’s most popular entry, 2001, bears a title that is, at the time of this review, seventeen years passed its branded date?

Leon Vitali, it turns out, is the keeper of this flame.  The “why?” Of his life’s course cannot be completely unraveled by a ninety-four minute documentary, but that, refreshingly, is not the point.  Filmworker is, in itself, an overdue light shined upon “the man behind the man”.  It’s true that had Vitali not emerged in Kubrick’s stead, there would’ve been another hired hand, or, more likely, hands, who would’ve dutifully done the work.  But, in spotlighting the unique and extreme case of Vitali, we are given both a mystery of devotion and, by extension, a tribute to the beat-down, calloused, unseen hands who make the industry click along. 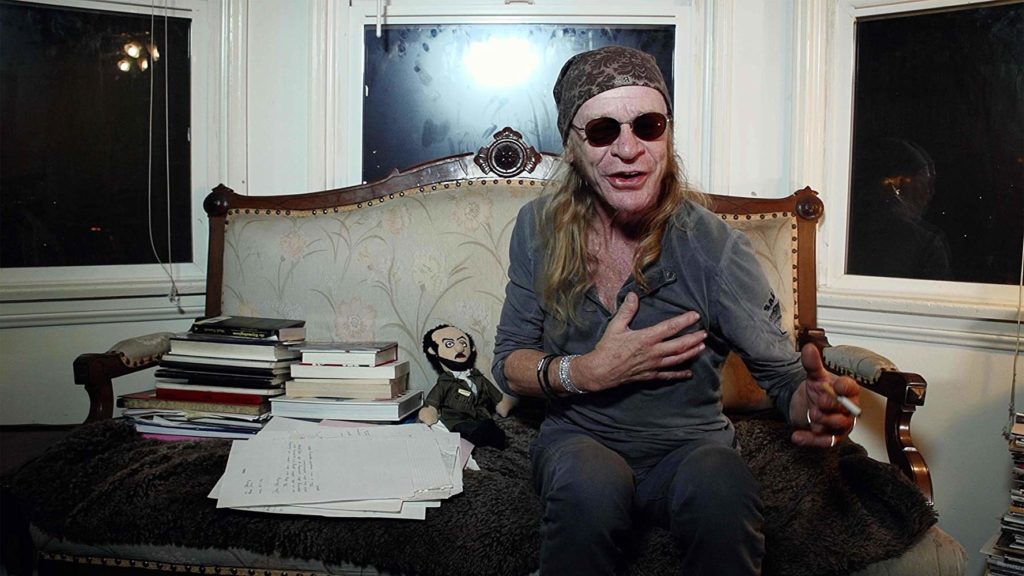 Vitali himself has been described as either the most self-sacrificing person to ever the grace the film business, or a total glutton for punishment.  After watching Filmworker, a moving and balanced work essential among film-centric films, one comes away convinced that he might just be both.

Kino Lorber’s DVD of Filmworker is a solid, if not overburdened release.    A fine transfer, including numerous clips from Kubrick films (most prominently Barry Lyndon, The Shining, Full Metal Jacket, and Eyes Wide Shut), is paired with a supplementary video of Q&A with Leon Vitali and director Tony Zierra, and Filmworker’s trailer.  One laments the absence of a Blu-ray release; but then again, one can make the symbolic leap that standard definition suits the humility inherent in the spirit of the undertaking, and Vitali himself.