The Struggle For Women’s Voting Rights In England Doesn’t Get The Vote. 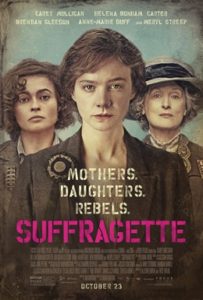 Sharon Autenreith: I’ve been looking forward to Suffragette for months. The British campaign for women’s right to vote is an important piece of history and one that’s been largely untold on screen (the character of Mrs. Banks from Mary Poppins notwithstanding).   It was gratifying, too, to see that Suffragette was both directed and written by women (Sarah Gavron and Abi Morgan). But the movie itself, as a viewing experience, was a letdown.

Let me start with what works. Carey Mulligan is a compelling leading woman as Maude Watts, a working class wife and mother, a garment worker who is inexorably drawn to the women’s rights movement. And it is a movement for women’s rights, broadly speaking, not simply for the right to vote. Suffragette shows in grim detail the many ways in which women in Maude’s day faced abuse and oppression – pay inequity, sexual harassment in the workplace, lack of custody rights. But suffragettes knew that the right to vote was the foundation for seeking other change.

Maude joins the suffrage movement just as decades of peaceful protest are shifting to a more militant approach. Listening to activists justify civil disobedience including the destruction of property seems “ripped from today’s headlines”. How much responsibility do citizens have to obey the law, when the law has been used to deny them justice? Brendan Gleeson is excellent as a police inspector who understands the motives of the suffragettes but it determined to stop them. Suffragette has other strong supporting characters, too; particularly Helena Bonham Carter as a fiery, uncompromising political activist.

Watching Maude pay the price for resisting the status quo is affecting, but the movie as whole is slow, dull, and unfocused. The look doesn’t help: “Suffragette” is dark and grimy in its color palette – an accurate reflection of the world in which Maude’s character lives, but still difficult to watch.

Suffragette is stolid, earnest, and unimaginative in its storytelling. Gavron should have taken notes from Ava Duvernay, whose Selma recounted an equally important moment in the history of civil rights, but with far more dynamism. Suffragette tells what is, in reality, a moving story – and yet I never found myself moved by it. 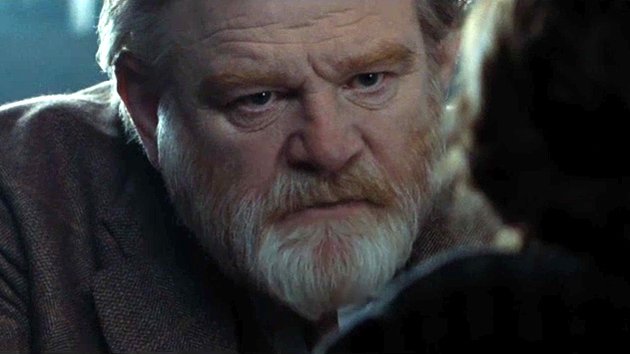 Erik Yates: I feel a lot like you did when I watched it.  The elements are all there, but something feels undone about the whole affair.  The cast is top-notch.  In addition to Carey Mulligan (Far From the Madding Crowd, Inside Llewyn Davis), Helena Bonham Carter, and Brendan Gleeson (Calvary), Suffragette features a very brief but welcomed visit from Meryl Streep, and Ben Whishaw (“Q” from Skyfall and Spectre).

As I am aware of the movement, much of this fictionalized tale of a real, historical struggle caught me off guard with the portrayal of these civil rights activists as almost terrorists.

Their form of civil unrest went way beyond the casual disruption of public transportation and marches on the seats of power, to public distraction with rocks going through store windows, bombs being planted, and a plot to go after a target that justifies Gleeson’s Inspector Arthur Steed’s desire to shut down the suffragettes regardless of how empathetic he may be to their intentions.

All of the elements are there, but yet it never grabs the audience and forces them to deal with the struggle in their own terms.  Maybe because this is being cast as a far-off past event that we feel that we are so far removed from is one reason.  Selma, as you mentioned Sharon, feels so current despite being 50 years ago, because of the events all of the country involving race-relations, #BlackLivesMatter, and the like.  But I think perhaps that you have hit the nail more on the proverbial head that this film is simply unfocused. 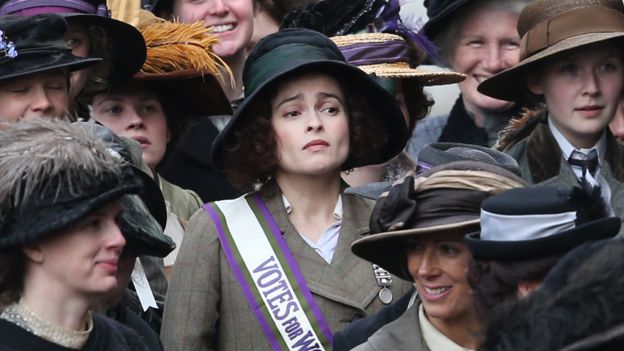 Maude’s transition from passive laundry worker, wife, and mother to militant activist who risks everything she holds dear is a very disjointed affair.  Her husband’s reaction turns too quickly in order to show us the blatant sexism in society that women were facing. Unfortunately, it does so at the expense of showing us the true heartbreak of what that sexism does to a genuine loving relationship when it’s confronted with the effect of what happens when one is just as impassioned to change the status-quo as they are to exist in the roles they have always known.

So in the end, Suffragette is a solid, well-acted film that will have you leaving the theater with a genuinely positive view of the whole affair, while leaving you unaffected by the experience.  Maude’s struggle, will largely be regulated to an historical event that we will feel that we should have some knowledge of, but with no take-aways to apply to the issues of equality that women still face today. It won’t affect change on the sexism that is still prevalent today, even if it is much more subtle now than the time period depicted here.  That this film is so easily dismissed seems to be the real crime. The “votes for women” campaign that Suffragette is hoping for, sadly, is going to end up many votes short. 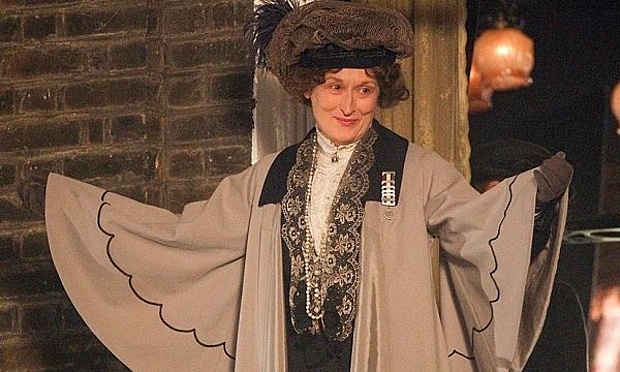