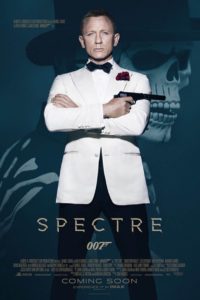 JIM TUDOR: A major ghost from 007’s past is back to haunt him in Spectre, the latest entry in the monumentally long-running James Bond film series.

Named for the clandestine nefarious criminal organization famously led by Ernst Stavro Blofeld (the bald mastermind with the white fluffy cat), Spectre is both in keeping with the darker, bolder Daniel Craig era, and a throwback to the series’ lighter days.

Every Bond film from the Pierce Brosnan era onward has attempted to nostalgically evoke the series’ Sean Connery golden era while also plowing forward into the future. Of course, Bond is about nothing if not serving up what an audience wants. That applies to the obligatory familiarities (“Martini, shaken not stirred.”) to the deeper, base appeal of the character – a witty, lethal, irresistible, un-killable expert at everything, and yet a blank slate. Years’ worth of analysis has already been spun regarding the continuing allure of this character, so often cited as antiquated. Even voices in the films themselves echo that opinion, one that each entry sees fit to rebuke in its own way. Yet, there are certain elements that simply must be there, or else it’s just not Bond. (The “Bond girls”, the grandiose opening titles, and before them, the world travel, the amazing cars…)

No matter whether a Bond film is great, subpar, or lousy, they all ultimately end up in the same place: butted up next to every other Bond movie in a boxed set, most likely the spines joining graphically to create the iconic gun barrel logo, or some such thing.

Each time there’s a new film, the entirety of James Bond will return, as well. Yet, even as the collective legacy retains tremendous value to the studio that is ever repackaging it, the separate movies are sapped of their individuality. That’s why it’s up to critics and fans to actively discern them, and to parse out which matter, and why.

Spectre, whatever one may think of it, very much matters. It matters to the series, and it matters to the characters. And it matters to Daniel Craig (in his fourth outing as Bond) and director Sam Mendes, who, with Skyfall before this one, have elevated the franchise to a higher level of artistic merit and satisfaction. Spectre, while not topping Skyfall in terms of sheer sumptuous 007 film satisfaction, is nonetheless epic in its own right. Its sweep is grand, in an organic way. (As opposed to 2002’s Die Another Day, which set out to celebrate its being the 20th Bond movie by clunkishly referencing all eras up to that point. Someone would open a drawer revealing Connery era gadgets once issued by Desmond Lywellyn’s “Q”. Nostalgia fix satisfied, moving on…)

Considering the obvious amount of careful consideration applied in the making of Spectre, it’s not out of line to acknowledge a true cinephile respect for it. When we allow ourselves to feel superior to entire factions of cinema, when we laugh and scoff at any given Bond movie for simply being what it is, we’ve crossed a line that not even 007 would cross. As a lifelong fan of this series, my devotion has only felt artistically and emotionally justified by the Daniel Craig films. Spectre brings them all to a head – perhaps even a close. 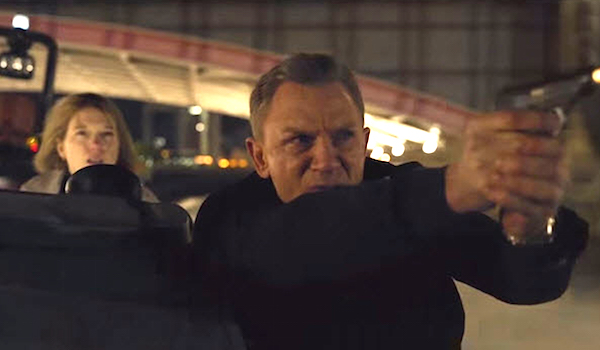 ERIK YATES: And your observation about the need to reference the eras before it have been more satisfying to me with Daniel Craig in the title role simply because with Spectre, they seem to be able to accomplish that feat by simply referencing the other Daniel Craig films before it. Skyfall combined the nostalgia of the Connery era with the inclusion of the Aston Martin and 60’s era gadgets, while Quantum of Solace gave us a throwback of the 1960’s era secret villain society S.P.E.C.T.R.E. with its updated network of Quantum. In Spectre, Sam Mendes has brought us a Bond universe so-to-speak, where the events of Casino Royale, Quantum of Solace, and Skyfall gel into one larger story. This allows for Spectre to simply reference the 3 films before it and by doing so they accomplish referencing the 53 years of history in this series. And because of this, Spectre may the perfect bookend to Casino Royale to wrap up Craig’s reign as Bond.

While technically having one more film on his contract, which is the gigantic 25th Bond film, recent statements have ranged as an absolute “No” on Craig returning, to a not-so-fast backpedaling on that notion. Time will reveal the answer as to whether we have seen the last of Craig in the role, but he has at least given rise to a healthy debate on whether or not he deserves to contend with Connery, and to a lesser degree Moore, for the crown of being the “best Bond”. In terms of box office, Craig reigns supreme, while Moore enjoys having the most films in the series. Connery, as the original actor, will of course be credited for how he established and shaped the character, and continues to influence each incarnation of the role.

“Specter” brings back the gorgeous cinematography that was on full display in “Skyfall”, and builds on the narratives of Bond’s origin story and development that was established in “Casino Royale”.

Lots of minor plot points are dependent on the audience’s familiarity with the previous Craig films, so be aware of this going in. Some of the stunt pieces are spectacularly executed from very simple ideas. A helicopter fight over Mexico City is a simple set piece but the choreography of the fight inside the copter along with the acrobatic stunt flying of the pilot create a fun and exhilarating ride for the audience.

Ralph Fiennes is settling nicely into his role as “M”, along with Ben Whishaw as “Q”, and Naomie Harris as Moneypenny. Christoph Waltz enters the fray as Oberhauser, with an expected reveal of a more famous character in the Bond universe. But for me, what really worked well in Spectre, perhaps more than the other Craig films, is the perfect mix of Craig’s darker take on Bond mixed with the playfulness of previous versions. Here, Craig is finally Bond. Casino Royale was how he became a double-O and earned his license to kill, while Quantum of Solace was a direct continuation of that origin story. Skyfall, saw him finally accept the role and address some demons of his past. In Spectre, he is the embodiement of all of these things.

With Moneypenny to flirt with, and “Q” to trade barbs with, we finally get to see the Bond of old emerge into a tale that is in some ways a throwback one, but also provides the path for the series to move forward. In addition to the classic character interactions, this is also the first Craig Bond film to have a real super-henchmen along the lines of Odd Job, and Jaws. Dave Bautista (Guardians of the Galaxy) plays Hinx who is an unstoppable killing machine, but under the direction of Sam Mendes is not an over-the-top cartoonish henchman at all, which matches the gritty tone of the Craig-era films. This may be the first Bond film in a while where I truly felt that the henchman and the villain could actually win this fight, which added to the tension of the plot. Seeing it in IMAX made for an even richer experience that built upon the tension existing in the film itself.

JIM: As of this movie, four films in, I’m finally comfortable declaring Craig the greatest Bond. Not only that, but I’m close to declaring Mendes the greatest Bond director. (And that’s coming from someone who’s never been a big Mendes booster.) Of course, making either of those pronouncements is akin to declaring Citizen Kane the greatest film ever made – yes, it is, but that’s because it knew how to build upon and perfect everything that came before it. Craig and Mendes have been granted considerably more creative freedom in weaving their 007 tapestry. Previous films not only stood alone and did not interconnect, they were forbidden to do so. When Spectre opens with an admittedly strange title card that says “The dead are alive”, it feels pretentious in a 007 film context. That’s definitely Mendes excersising his creative freedom. And, more power to him, I suppose. (Not that I understand why we need that title card.)

From a visual standpoint, the semi-muted cinematography of Hoyte Van Hoytema (Her, Interstellar) is definity very rich, but it’s also very different from what Roger Deakins brought to Skyfall. The difference is justified, and like so many other details in this run of films, the presence and high-end craft of cinematographers such as these guys in the mix only help to irrevokably raise the bar for any future Bond films. 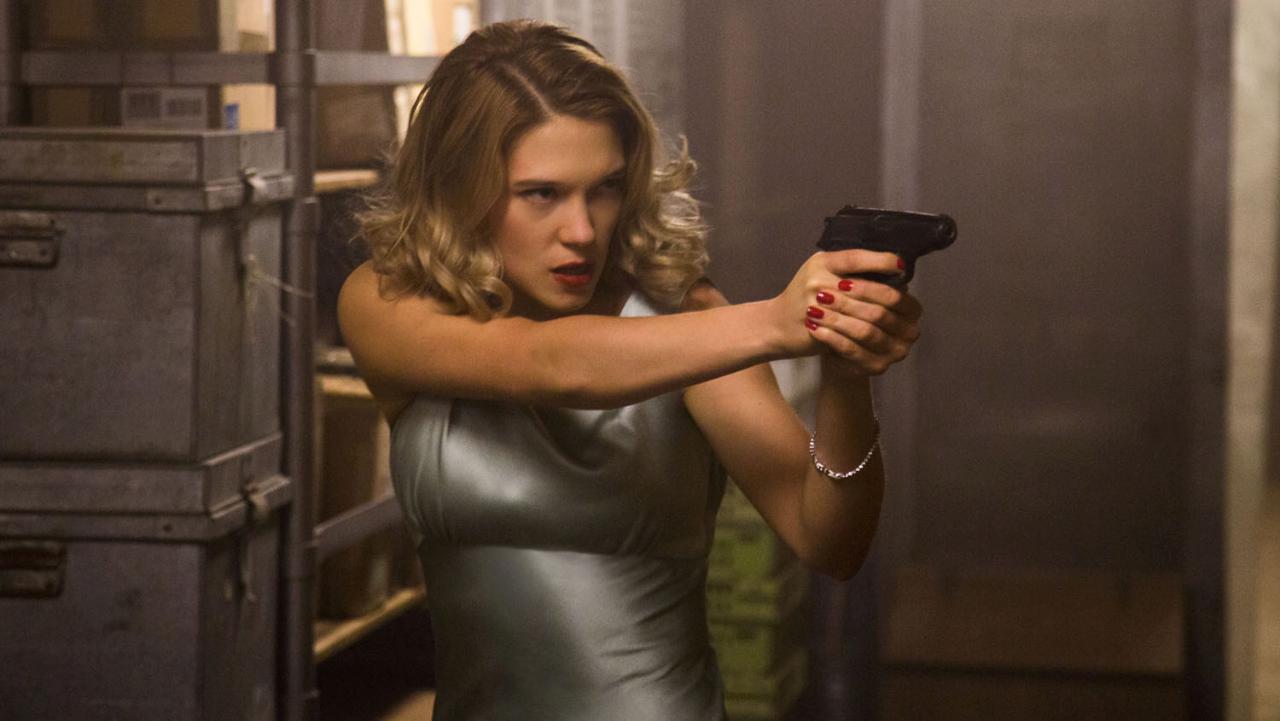 French actress Léa Seydoux continues to eclipse her Blue Is the Warmest Color co-star Adèle Exarchopoulos (odd, considering they both hit the scene with equal acclaim at the time of that film) by playing what turns out to be one of the most grounded Bond girls yet. She’s strong, but not another “female Bond”. Seydoux is at first a little cold in the role, but by the end, it feels as though she very much belongs. She doesn’t show up for a while, but once she does, she’s in for the long haul.

It will be interesting to see where this franchise goes from here. James Bond will return, that much is assured. Hopefully we get one more with Craig, but if not, with Spectre going the way it goes, it’s almost okay. It’s been thrilling to witness Bond movies come of age, even as I continue to occasionally wonder just what it is that compels me to the series. (Part of me isn’t sure I want to know!) As a kid, it was the gadgets. Then, perhaps the ladies. Now, maybe it’s simply the fact that there are no noisy children. Through thick and thin, it remains consistant in the things that matter most. It’s true that no series can subsist forever on its own nostalgia and dug-in resistance to the changing world, although this one is certainly giving it its best shot. Fortunately, James Bond rarely misses.

The dead are alive.