Thirty years in from the exploding heyday, Dolph Lundgren is here to show us how little action movies and muscle-led cinema have evolved. And yet, we’re meant to think that they have.

In 1985, Rambo won the Vietnam War. It was a simpler time. Granted, his victory, in actuality, was a comparatively small one, and the war (or “conflict”, if you prefer) had actually ended (differently) years prior. But none of that mattered in the cultural moment. The time had come for catharsis over introspection, even if it meant dehumanizing the foreign villains and reducing the whole matter to a violent action cartoon. (An actual short lived “Rambo” cartoon would come later). The point was, Rambo got a second chance to beat the Reds, finally reaching his one-man-army potential. And we cheered.

I don’t remember what the reviews of Stallone’s other 1985 film, Rocky IV, were like, but I imagine few critics could resist allowing Rambo: First Blood, Part II to inform them. Once again, Stallone revives one of his two iconic characters in a grandstanding effort to singlehandedly beat back the Soviets. Or, at least one Soviet. That Soviet was Ivan Drago, an icy behemoth every bit as engineered as the film itself. (The difference being that Rocky IV was winning, Drago was not). Drago, it’s safe to say, was the star-making role for Dolph Lundgren. 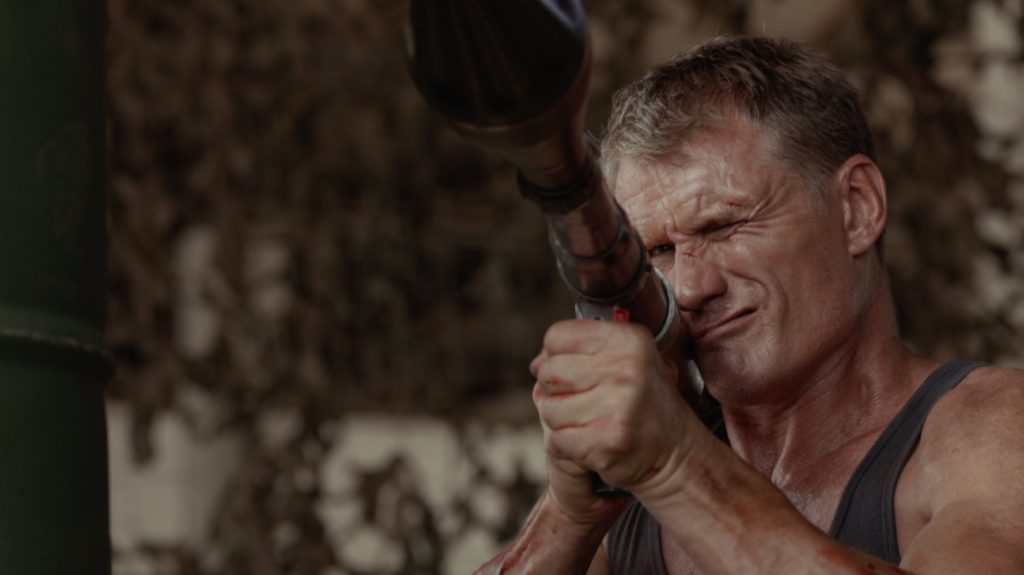 Dolph Lundgren in THE SKIN TRADE.

Though not a star stateside, Lundgren has managed to forge a Stallone-like muscled, action persona for himself elsewhere globally. Though his late-80’s Hollywood vehicles such as Red Scorpion and Masters of the Universe didn’t take, he’s nonetheless crafted an impressive “boutique” career, producing his own line of violent spectacle. With the long-anticipated The Skin Trade, he’s got American audiences in his sights again. But, I’d venture to say, not at the expense of his established fan base.

For good measure, martial arts sensation Tony Jaa also stars. Much of the true punch and “wow” of the film is courtesy of Jaa, who, though his English speaking is strained, has it where it counts. The man is amazing when he gets going, and the film has the good sense to let him – when it’s his turn. 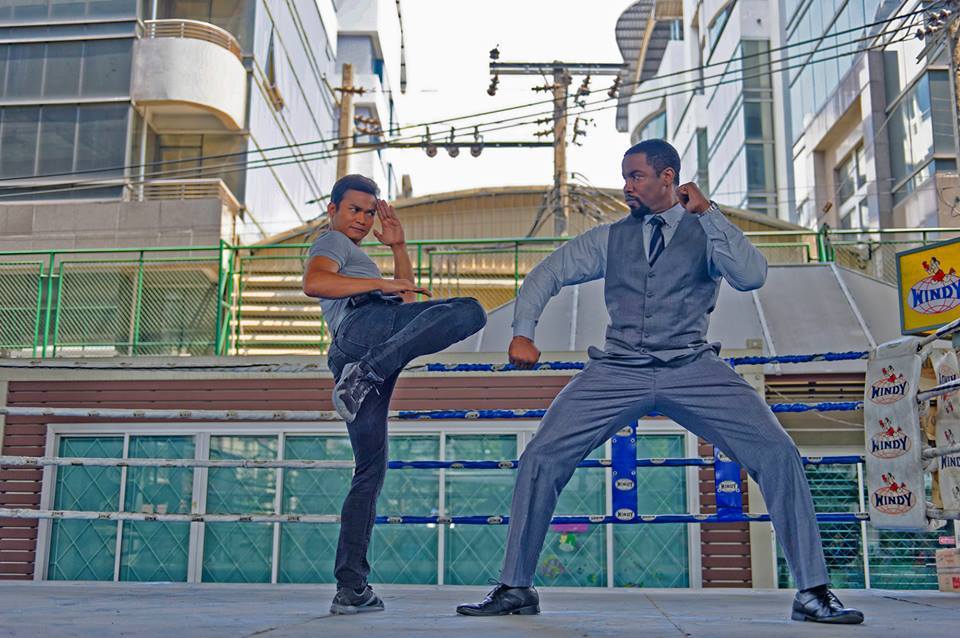 Although The Skin Trade boasts an impressive cast of welcome personalities (Ron Perlman as The Heavy, Peter Weller as The Chief, Michael Jai-White as Another Fighting Man, worth watching), it’s hamstrung in multiple ways. It’s continuing display of well-staged action tropes are, on the surface, what most anyone wants from a film such as this. There’s jaw-cracking roundhouse action and as many explosions as the film’s modest budget could afford. Lundgren, as the driving force in and behind this film, gladly utilizes the violent-justice protocol that Stallone locked down in First Blood, Part II, and later nudged coldly by Steven Segal and others, post-Charles Bronson. The Skin Trade, though, bears the sizable caveat of divvying up the “One-Man Army” into two or three characters. (Was First Blood, Part II actually all that groundbreaking? Probably not. But it’s zeigiesty response fired through our culture like one of those cool exploding arrows Rambo uses.) The problem is, as this tired formula is unironically brought back to us in 2015, all its well-charted cliches and poor simplicity is made all the more apparent by being spread thin across multiple lead heroes, Lundgren and Jaa, each off in their own non-intersecting stories for the longest time.

The film would likely survive were that it’s only problem. But these issues are gravely compounded by The Skin Trade‘s heavy-handed intentions to address a very real-world problem, sex slavery. Unlike Rambo II and Rocky IV all those many years beforehand, the “ripped from the headlines” conflict it takes on proves too sensitive to withstand this macho sensationalist/entertainment treatment. 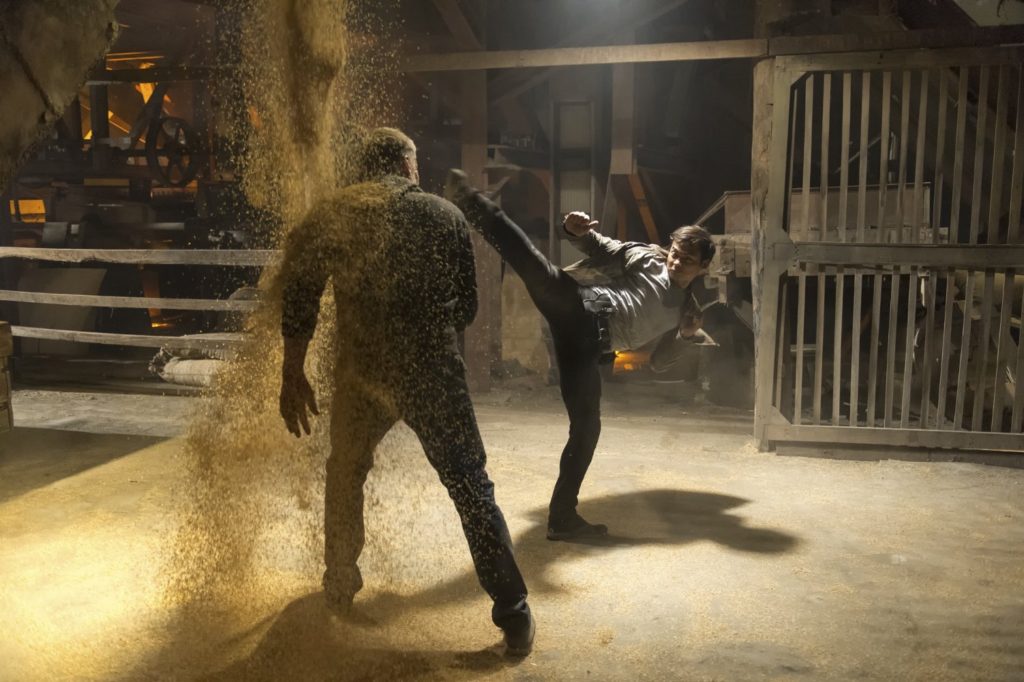 To make matters worse, for a film devoted to correcting the plight of victimized females, it doesn’t bother to do anything of substance with its women characters. There are conspicuously ferw of them, yet they tend to blend into blandness, either as victims or sex workers. Yes, the title “The Skin Trade” refers to sex slavery, but it also functions as a not-so-covert titular promise of skin, which it makes good on with cheapo strip club moments. The neon-adorned place is owned and run by a bad guy, but we the viewers are let in multiple times, nonetheless. While not leering at women the way even, say, Furious 7 does, this sort of thing is doing negative favors for a film that’s idea of gender activitism is to engage in an all-male “guy movie” shoot ‘em up.

Just beyond the truck-loads of old-school testosterone-fueled solutions, the gross imbalance and handling of this topic is simply uncomfortable. When viewers must be forced to consciously sidestep such things to get to what works (the fights), the film has problems that Dolph Lundgren or Tony Jaa cannot solve by shooting and/or kicking. In this age of internet fanboy feminism (which runs the gamut from posturingly nauseating or well-informed timely) and increased awareness and empathy to gender imbalance, maybe there’s a reason reality in action films has taken a backseat to metaphors, or less. Lundgren and company may have their hearts in the right places, but in 2015, this ensemble cannot win the war it’s picked.