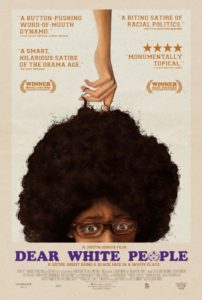 Sylwinn Tudor: Tightly written and directed by first time filmmaker, Justin Simien, Dear White People follows the stories of four black students as they navigate their identities within the context of the predominately white, affluent culture of their Ivy League school. Ultimately, Simien brings the conflicts, both internal and external, to a head in the provocatively (and poorly) chosen theme of a campus house party.

Living in St Louis and being someone for whom racial healing is an important issue, race, racial tensions and racial justice have been very much on my mind and in my conversations lately. That said, I was still a little anxious about how this film was going to play out. I anticipated something without much nuance to it. Perhaps it’s a little burnout from the buffeting of the past few months since #Ferguson brought racial conversations to the forefront but I was worried that what we would find in this film was another rant or a lecture. I was very happy to find myself wrong.

While the subject matter (racial tension and inequality on a college campus) is in fact a serious thing, the filmmaker chose to delve into the subject both unflinchingly and with humor. There are many levels of race and racial tensions addressed, from the oblivious denial of inequality to the Black Power refusal, then back down to the highlighting of covert forms of racial aggression. I appreciated writer-director Simiens ability to bring each of these to our attention, examining their strengths and weaknesses and ultimately bringing us around to the idea that each of us is human first and foremost, with our own quite complicated and nuanced stories to tell. 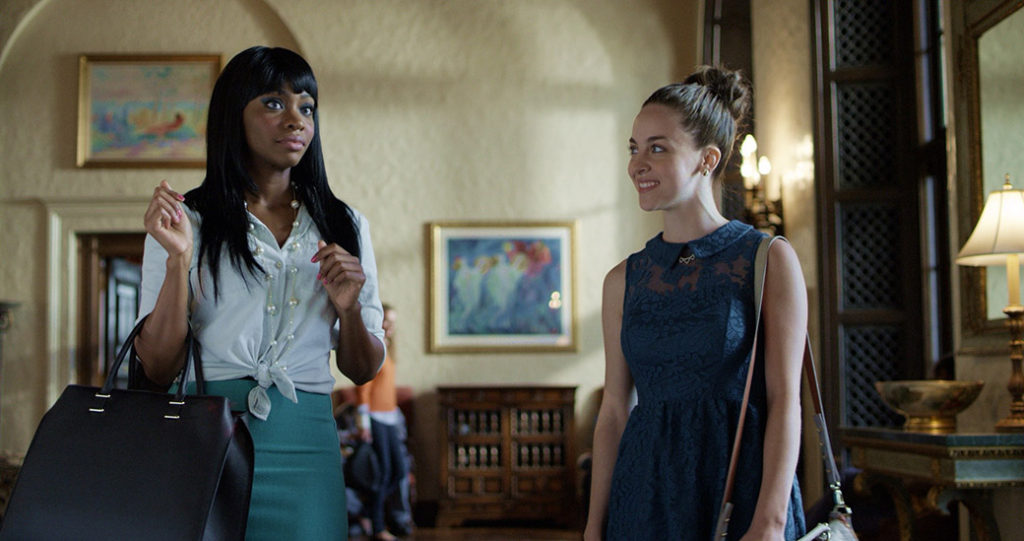 Sharon Autenrieth: I agree with that assessment. Dear White People reminded me of movies like School Daze and Barbershop that navigate the dynamics within the black community – the sort of in-house discussions that take place in minority communities. And as in the other movies I mentioned, Dear White People handles a lot of that potentially heavy material with humor.

Having said that, I don’t think Dear White People is particularly revelatory. So many jokes have already been made about whites’ obsession with touching black hair, or “black people time”. The jokes may still be truth-telling, but they’re not fresh. Most interesting to me, perhaps, was the sympathy for those who don’t neatly fit into any group. Sam (Tessa Thompson), the fearsome black activist at the heart of the movie, is biracial and not entirely comfortable in her skin. Lionel (Tyler James Williams), a quiet student journalist with a massive fro, is gay and targeted more for his sexuality than his race. There’s an amusing, tiny joke in in the movie when a young woman at a Black Student Union meeting mentions that the Mexican and Asian students are also meeting. She’s apparently attended all of these groups and has the sort of visually hard-to-pin-down ethnicity that is becoming more and more common in a multiracial society. Less and less of us are simply black or white these days, and even race is not the whole picture. Gender, sexuality, money, power – there are a myriad of ways in which privilege is established in America, and it’s nice to see a film at least nodding to intersectionality.

I felt uncomfortable at certain points in Dear White People. That’s probably a good thing. If there’s anything that we’ve learned during this season of #Ferguson, it’s that there’s still a lot of tension around the subject of race, just below the surface of polite society. Any movie that is going to honestly address such a raw nerve is going to make someone wince. Justin Simeon at least let me laugh and wince at the same time. 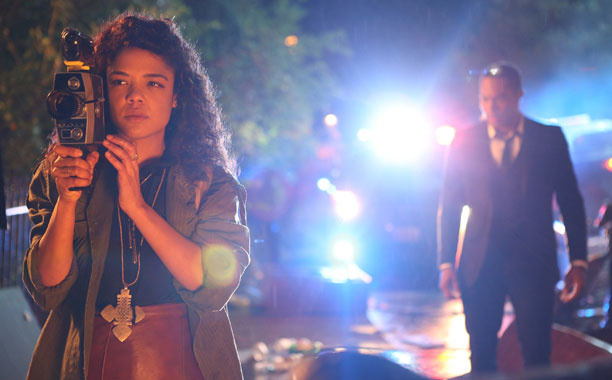 Sylwinn Tudor: I’ll admit to not having seen Barbershop or School Daze but I would agree that Dear White People doesn’t bring anything particularly revelatory to the conversation about race. What I think it did do, that is distinctive from other films dealing with this subject matter, is tell this story within a clearly educated historical film context. Simien shows a masterful and very intentional use of the camera. As a photographer, I particularly loved his use of framing and camera angle to tell his story. Never did I feel like the camera choice was sloppy or random. There are a few verbal references to Master Directors like Spike Lee and Ingmar Bergman. There are also visual references to Spike Lee and Brian DePalma. As a film lover, it made me happy to watch these play out and geek out a bit afterwards playing “cite the reference” with my husband, a game I will always lose but I enjoy nonetheless.

Dear White People manages to walk the line of smart, funny, and confrontational and balance that with solid filmmaking and performances. Maybe it doesn’t add anything radically new to the conversation, but it certainly doesn’t trivialize or lecture either. Definitely worth the watch.