Board Game Adaptation Fails To Go Bump In The Dark 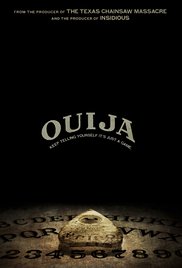 I’m sure I speak along with the rest of the world when I proclaim, “Oh good, another movie based on a board game.”

But then again, has an Ouija board ever really been considered merely a board game? For years, particularly during the “satanic panic” era of the 1980s, Parker Brothers, the then-manufacturer of Ouija boards, certainly maintained that that was the case. But really, any such statement is wrapped up in a thin veneer of deflection. After all, the whole point of engaging an Ouija board is to freak yourself into a supernatural chill, as you ostensibly commune with ghosts, spirits, dead people, and even demonic ghouls.

But, having been around for centuries as a supposed conduit to the netherworld, being relegated to toy store shelves alongside of Clue and Battleship since 1966 has likely damaged their spiritually dangerous reputation moreso than anything else. So the question is, is anyone freaked out by these mystifying oracles anymore? Yes? No?

“Ouija” might just be the preeminent PG-13 horror film to date – no blood, no gore, not even a lot of swearing, but truckloads of manufactured eerie-ness.

If you’re a thirteen year old girl out on a kinda-sorta date on a Friday night, then perhaps. Ouija, the new film based upon the infamous board game/witch board/gateway to the spirit realm, is in essence a soft toothed and ghostly “dead teenager movie”. (To borrow Roger Ebert’s phrase). And, its scares-to-attempted-scares ratio is about as good as that of an actual Ouija session, in which very little, if anything, actually ever happens. 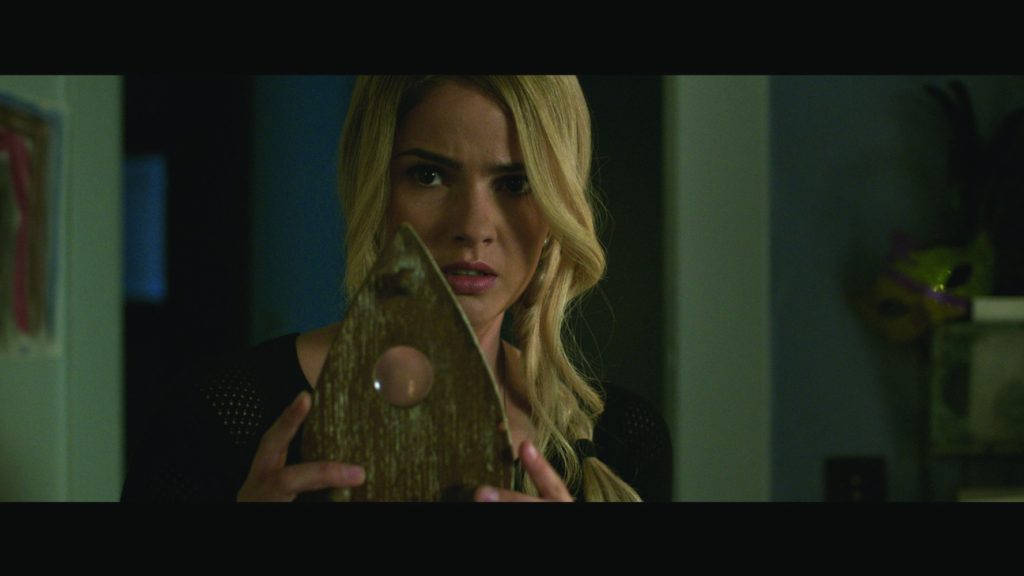 Ouija, however, might just be the preeminent PG-13 horror film to date – no blood, no gore, not even a lot of swearing, but truckloads of manufactured eerie-ness (it’s shot well, I’ll give it that – avoiding the transparent sheen of most other Platinum Dunes horror films). Like any other horror movie, it bandies about rules that must be followed, such as “You must end the session by saying “good bye”. (Because “Good Bye” is printed on the game board.) It’s flavorless to the core. Like its older, meat-headed Hasbro board game brother Battleship, Ouija is a clunky assemblage of functional elements from other superior entries in its genre. And like Peter Berg’s franken-movie of aliens and naval warfare, this one is simply too dumb to hate. It is, however, an inconsequential waste of time. If you’re not thirteen.

Olivia Cooke (Bates Motel) stars as Laine, a young suburban girl plagued with death, mayhem, and a lot nearby things suddenly going BANG! She and her friends all live in large, darkly outfitted farmhouses that are complete with creepy attics and dank unexplored basements without functional electric fixtures. After Laine makes the mistake of getting her circle of friends (including Daren Kagasoff, Ana Coto and Bianca A. Santos) to consult the titular board regarding the fate of another mutual friend, all hell breaks loose (figuratively speaking). 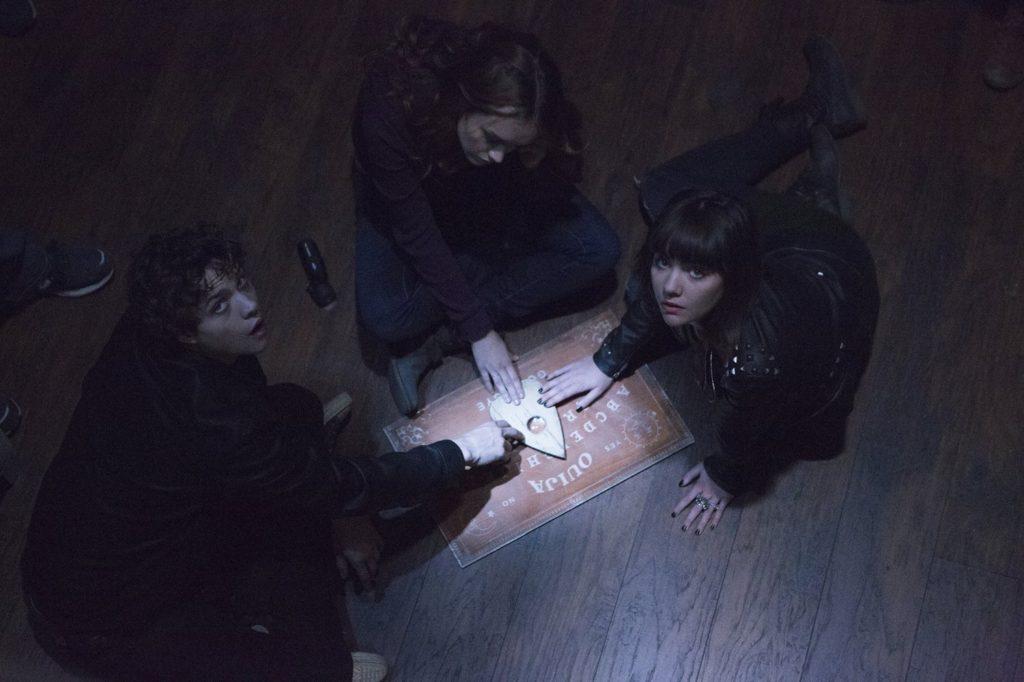 The Ouija board is like Jumanji, but with evil spirits. Or more accurately, considering that the board predates its own Hasbro/Parker Brothers packaging and marketing, Jumanji is like Ouija, but with live animals. In any case, “It’s not a game!!” And these kids all have to find that out the hard way. Freaky shots of gruesome stitched-up mouths and shrieking apparitions abound. The bland cast looks like they spent the afternoon in the hair salon and then another hour carefully selecting their generic wardrobes before confronting this particular brand of deathly occult.

For anyone who’s seen even a few noteworthy ghost pictures previously, nothing in Ouija will stick, shock, or fascinate. This film being produced in association with Hasbro, however, does of course render it One Big Ad. Therefore, it’s interesting to note that like Parker Brothers in the 1980s, Hasbro can’t allow the Ouija board to be all bad, even as it must also cling silently to its I-dare-you allure for marketing purposes. 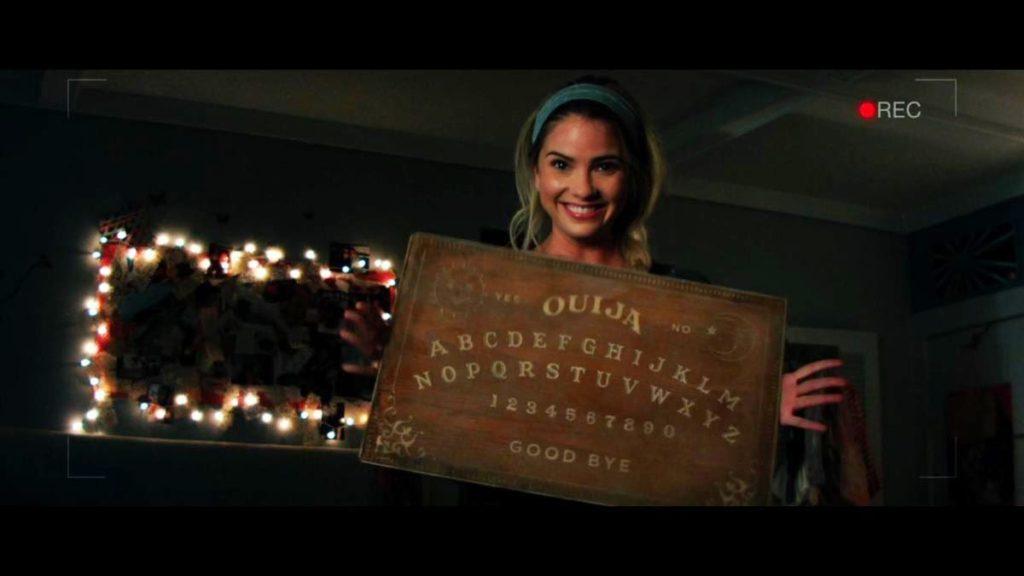 First the characters unleash death by using the thing, but later, it’s their only hope for answers. Then, it only brings more trouble. But in the end, they have to fall back on it (following, of course, the world wide web) for resolution. Its enough to leave a ticket-buying consumer automaton downright confused! But then again, solving such a conundrum would likely be the most thought anyone put into anything related to this stock movie.

Personally, I’m not closed to the possibility that Ouija boards can and perhaps have lead to trouble of the dark, unexplainable variety in the past. But here, any such unknown terror is nullified by the sheer by-the-numbers familiarity with every beat of the plot. If it’s “not a game”, no one told the filmmakers that. They’re clearly just at the table to pass “go”, and collect $20 million opening weekend.