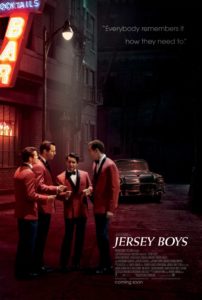 “Everybody remembers it how they need to” is the tag line for the new movie Jersey Boys which chronicles the story of Frankie Valli and the Four Seasons.  Based on the hit Broadway play of the same name the movie is written by the play’s writers, Marshall Brickman and Rick Elice.

Vincent Piazza plays Tommy DeVito a local up-and-coming gangster who works with local mobster Gyp DeCarlo, played beautifully by Christopher Walken.  Tommy DeVito is a musician with a band but moonlights doing petty theft and other hoodlum activities.  DeVito has taken young Frankie Castelluccio (John Lloyd Young) under his belt to engage in his illegal activities but also to help develop his angelic voice that everyone recognizes has the potential to be a huge success.  Gyp DeCarlo believes this as well and looks out for Frankie telling Frankie that if you do the hard work, success will follow. Also in DeVito’s band is Nick Massi (Michael Lomenda).

Success begins to follow the group, called the Four Lovers, but they are still in need of a fourth member.  When they hear about Bob Gaudio (Erich Bergen), a piano player and songwriter, they hire him when a simple introduction leads to the development of a smash hit.  They quickly rename themselves The Four Seasons, with Frankie going by the last name Valli now, and the rest is history.

What Jersey Boys does is chronicle the story of The Four Seasons with each of the band members offering their take on the events while speaking directly into the camera for the ears of the audience.  From the strife of their formation, to the turbulent efforts to keep the band afloat amidst inter turmoil amongst its members, each person literally remembers it how they need to, as the tag-line suggests, in order to justify their actions. Who you believe will be up to you.

Clint Eastwood directs this with a much lighter touch than his usual directorial fare.  There are still strong themes and shades of darkness, but tonally, Eastwood is able to shine a brighter light on it all even helping to draw out lots of humor in the characters and the film as a whole.  Eastwood must also be in a humorous mood as he offers up a cameo appearance of himself via a clip from his 1950’s TV show, Rawhide, that one character is watching just before losing his virginity against the backdrop of one of the theme of Jersey Boys, being about boys becoming men.

The other aspect that lightens the mood is a focus on the music that was the glue that held every one of the characters together despite their personal struggles.  The soundtrack is an amazing collection of songs from the Hall of Fame band and encapsulates the golden age of doo-wop, and the performances in the film help bring this style of music forward, into a generation unfamiliar with the style, in a way that makes it feel fresh and relevant today.  The musical scenes are there to not only provide character development and historic perspective but to simply showcase a great musical genre.  What is even more impressive is that the actors sang live onset much like what was done in last year’s Les Miserables.

Almost everything works in this film.  The story is engaging, and the music is refreshing.  Audience members, at the screening I attended, were softly snapping, tapping, and clapping along to the songs.  But not everything works.  One of the missed opportunities for me was the fact that Valli’s home life is dealt with in a rather shallow manner considering how important it is to some of the film’s defining moments.  We are given a good look at the quick marriage of Frankie Valli, but very little time is spent showcasing the story arc between him and his wife and daughter. We are given enough detail to keep us in the loop on what is happening in his home life, but not enough to develop deep seated emotions to the events that take place. Emotions that are needed in order to fully identify with Frankie in a pivotal moment where Frankie sings “Can’t Take My Eyes Off of You” for the first time.  It is still a strong scene, but its impact is muted given the lack of development that I’ve cited.

The story concludes with the group’s induction into the Rock and Roll Hall of Fame, and a flashback scene of the Four Seasons singing during their prime.  It is here that Clint Eastwood closes things out with an in-credits scene of the cast engaging in one last song highlighting the entire crew, much like the Broadway play might do.

On the whole, Eastwood delivers a solid musical that is engaging, humorous, and that celebrates the great music of that time which was being made just before the British Invasion of 1964.  Despite any flaws it may have, including ones I’ve mentioned, Jersey Boys is worth your time and is one of the better films of the first half of 2014.  “Everybody remembers it how they need to” and I will remember Jersey Boys well.