HOW TO WATER DOWN YOUR PROTAGONIST

Or, How to Homogenize Your Dragon

A Response To HOW TO TRAIN YOUR DRAGON 2

DreamWorks Animation may be the most prescient challenger to PIXAR/Disney’s cinematic brand of animation domination when it comes to the box office, but from an artistic and creative standpoint, they’re still lagging behind the Dynamic Disney Duo.  The one exception is the Kung Fu Panda franchise, which rivals anything Disney/PIXAR has done yet.  But in 2010, it looked like DreamWorks had added another jewel to its crown with How to Train Your Dragon, one of the greatest animated features in years, and the film that should have won Best Animated Oscar over Toy Story 3 that year.

How to Train Your Dragon was followed by series of shorts and an animated series, and 2014 marks the return of the brand to cinemas.  The central character in the franchise is Hiccup (Jay Baruchel), a young Viking with a lifelong bond of friendship with his dragon, Toothless.  When we first met Hiccup in 2010, he was a brilliant subversion of classic Campbellian hero archetypes – about as far as heroic as he could get and still be a protagonist.  Hiccup was much closer to the jester or clown archetype; a clumsy and hapless smart-Aleck who seems more like supporting character material.

In a conventional Hero’s Journey, Hiccup would be one tagging along in the main character’s shadow.  Even his name, “Hiccup,” is silly and inconsequential; a throwaway gag that reinforces his status at the bottom of the social ladder.

Hiccup (Jay Baruchel) in the shadow of his father, Stoick the Vast (Gerard Butler)

Hiccup’s father, Stoick the Vast, is the chieftain of the tiny (presumably Scottish, based on the accents) village of Berk.   In contrast to his son, Stoick fits the Campbellian archetype to a “T.”  He’s everything you want in a classic leading man:  mighty and courageous; a born leader.  He’s essentially a pastiche of traditional Western notions of masculinity:  aggressive and dominating, fearless in battle against formidable foes (as evidence of Stoick’s inherent warrior spirit, Hiccup tells us that his father killed his first dragon while still an infant).  Physically, he’s massive and powerfully built, with huge muscles and a giant beard—yet, true to traditional masculine stereotypes, he falls apart at the notion of talking to his son about his feelings.  Even his name, “Stoick,” reinforces the idea of the classic male hero—the “strong, silent type.”  Finally, he’s voiced by Gerard Butler, an actor whom Americans already held up as a paragon of masculinity, thanks in part to his role as King Leonidas in Zack Snyder’s 300 (previously, Butler had also played the warrior Beowulf in Beowulf and Grendel).

Hiccup’s mother, Valka (Cate Blanchett) is missing from the family dynamic and presumed dead.  Her absence is immensely significant, leaving a terrible gulf between father and son that neither can bridge on their own.  Despite Hiccup’s desperation to prove himself to his father, Stoick will not be pleased with anything his son says or does.  Hiccup is just too radically different from Stoick’s preconceived notions of what it means to be a Viking (read:  what it means to be a man).  If Stoick is a paragon of Viking masculinity, Hiccup is the polar opposite:  small and scrawny, with a stammering, nasal voice.  He can’t lift a hammer or swing an axe.  He can’t even muster up the courage to ask out Astrid (America Ferrera), the Viking maiden warrior he pines after in secret.  Instead, while Astrid and the other Vikings are out fighting dragons, Hiccup is spending his time designing new inventions.  He’s gifted in brains, not brawn, and although he hopes his technological innovations will find him a place of acceptance, he is still rejected by his tribe.  The message Hiccup gets from his culture is clear:  the only way he can prove himself is to stop being himself.

Co-writer/director Dean DeBlois, who is now openly gay, but has been closeted in the past (industry insiders assumed it was his frequent collaborator, Chris Sanders, who was the gay one), must know what it means to not conform to traditional heteronormative notions of masculinity.  Hiccup’s character (who is straight, although his mentor, Gobber [Craig Ferguson] is written as gay) resonates with the type of pathos that can only come from someone who knows what it feels like to fail to meet others’ expectations.   At the same time, Hiccup is a character that any of us who have ever struggled with our own self-image can relate to.  Who among us has never felt like an outsider or a misfit?  Has never longed for others to see what we had to offer, while fearing that no one ever would?  Hiccup is such a compelling character precisely because of how he is defined by his struggles and challenges in a culture that rejects him.  And when he is able to forge a bond with Toothless, it is precisely because he lacks those qualities which the other Vikings value (specifically, a violent killer instinct)—and yet it is precisely those qualities (specifically, mercy and compassion) that allow Hiccup and Toothless to overcome the hate and prejudice that has divided dragons and Vikings for centuries.

One of the more powerful messages of “How to Train Your Dragon” is that strength is found in perceived weakness, and that it is through humbling ourselves in selfless love that we truly find victory.

When the rest of Berk finally sees the value in Hiccup and his approach to dragon training, they become more powerful and prosperous in peace than they ever were before in war.  It’s a beautiful, heartfelt message that’s expertly communicated, and it’s one of the reasons the movie is so powerful and resonates so much with audiences.

Yet now, four years later (five years later in the world of the film), Hiccup is struggling to figure out who he is all over again.  Maybe this is because DeBlois doesn’t know who Hiccup is anymore.  Gone is the awkward misfit we all saw ourselves in, whom we fell in love with before.  No longer is our hero a quirky brainiac who has learned to trust his considerable brains over his lack of brawn.  Meet the new and “improved” Hiccup – a more traditional (read:  boring) sort of action hero, complete with super-cool dragon-rider armour and retractable flaming sword accessory (a toy I’m sure will be on every kid’s Christmas list)!  In a blatant betrayal of the message and themes of How to Train Your Dragon, Hiccup has been watered down into the very same Campbellian archetype that he was subverting in the first place. 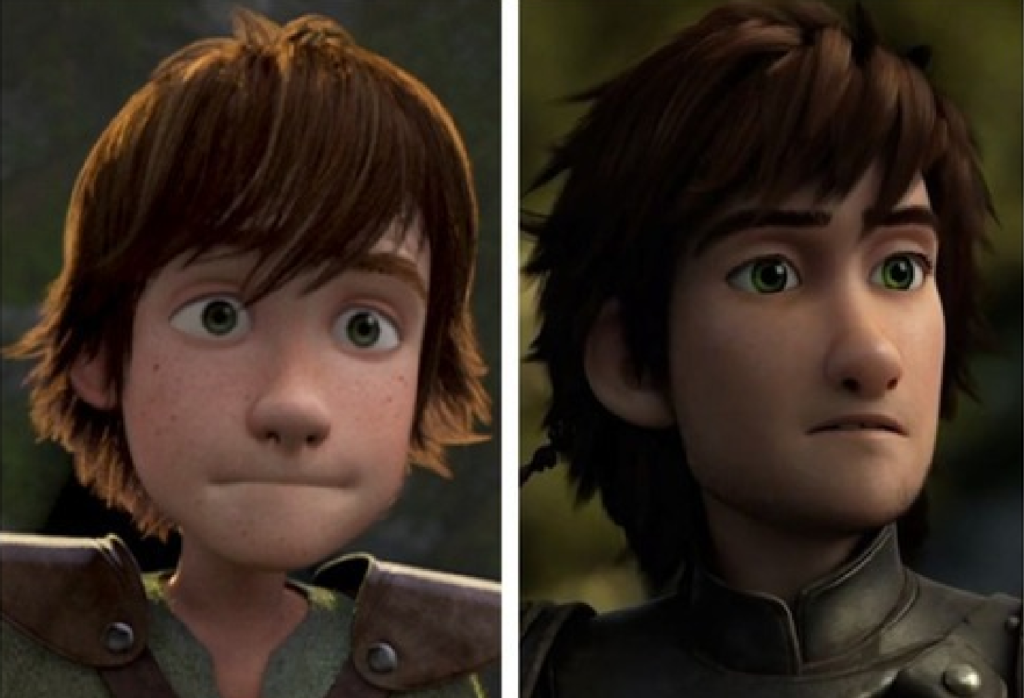 Hiccup before, and after, some kind of magical super-puberty

How to Train Your Dragon 2 sees Hiccup on the receiving end of a Hollywood makeover.  No longer is he a “talking fish-bone”; the new Hiccup is taller, broader, and stronger—a real leading man’s man, complete with rugged (yet perfectly groomed) stubble.  The character artists and animators have even made him handsomer:  not only does he have much better hair now, but he even seems to have undergone plastic surgery—his jawline and chin have been strengthened to angular lines more befitting a traditional hero, and his teeth have been straightened (who knew they had such great dentists in Medieval Europe?).  Even his big eyes (a shorthand visual sign for trustworthiness and vulnerability) have been reduced in size to make him look stronger and more formidably masculine—in other words, more like his father.  But wasn’t the message of the first movie that Hiccup didn’t need to conform to his father’s preconceived notions of masculinity?

Hiccup’s evolution represents a disturbing trend I’ve noticed in Hollywood over the last couple of years—the geek outsider recast as male power fantasy.  The 2010 version of Hiccup was like Tobey McGuire’s Peter Parker in Spider-Man (2001):  shy, awkward, and socially inept.  But the 2014 version is more like Andrew Garfield’s Peter Parker in The Amazing Spider-Man (2012):  dripping with tough-guy awesomeness and James Dean coolness.  Like Peter Parker before him, Hiccup has gone from relatable outsider to flawless Gary Stu:  a wish-fulfillment blank slate we can project ourselves onto, instead of an underdog whom we could actually identify with.  Now, Hiccup’s got it all—the awesome dragon, the leadership of his tribe if and when he wants it—even the beautiful girl at his beck and call. 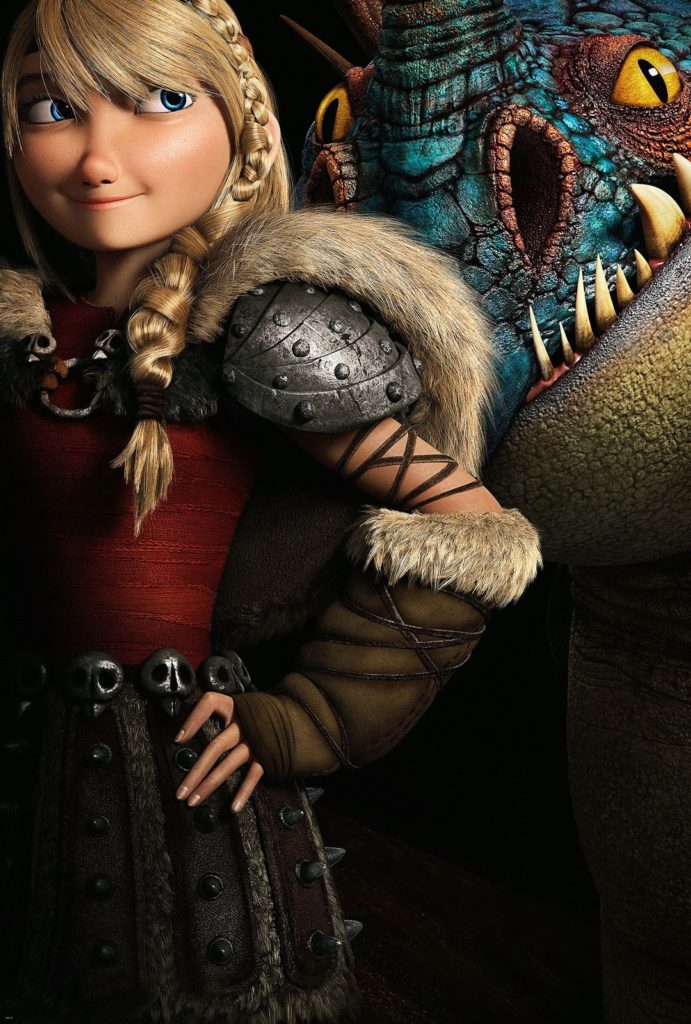 Oh, and let’s talk about Astrid, shall we?  She used to be such a great character.  As much as Hiccup subverted traditional notions of masculinity in How to Train Your Dragon, so did Astrid subvert traditional gender roles.  Rather than Hiccup finally working up the nerve to pursue her, it was Astrid herself who initiated and pursued the relationship—first as an antagonistic rivalry borne out of jealousy and suspicion, then as a begrudging acceptance as she opened her mind to seeing things differently, later in mutually respective friendship, and finally in romantic embrace.  Astrid was a strong female character with her own agency; always the one who made the first move, up to and including their first kiss.  But now she is relegated to being the hero’s girlfriend; a one-dimensional character whose sole purpose is to facilitate Hiccup’s journey.

The most egregious example of this is the issue of who will take over the role of chieftain of Berk when Stoick is gone.  Stoick wants Hiccup to take over, but Hiccup doesn’t want the job (at least until he does).  But during their initial conversation, Astrid specifically says how if she were in his place, she would jump at the opportunity.  Now, anyone with a half a sense of foreshadowing or dramatic understanding should be able to see where this should be going—Astrid will step into the role of chieftain, and Hiccup will be the head inventor or dragon wrangler or whatever.  Yet this is never followed up on, because in the world of How to Train Your Dragon 2, Astrid’s hopes and dreams don’t matter—only Hiccup’s are important.

This sequel has trampled all over the progressive and subversive messages of its predecessor.  Where How to Train Your Dragon championed the outsider and challenged conventional notions of masculinity and strength, How to Train Your Dragon 2 restores traditional gender roles and re-casts its leads as conventional action heroes.  The themes and characters of a great film have been gutted and hollowed out, and its shambling corpse has been turned into a dancing puppet for shilling toys.