Jude Law Gets All Punchy, In More Ways Than One 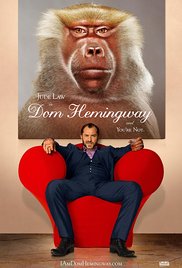 So who is this Dom Hemingway, anyway? Other than the most singularly memorable character Jude Law has ever played? The short of it is, he’s a major English cad who fancies himself a lad, but then finds what it is to be someone’s dad. And someone else’s granddad. He’s been in the big house for twelve years, and now he’s finally out. And the moment this former criminal safe-cracker and self important misogynist struts into the open air of freedom, he’s naturally starting trouble. Before long, he’s a former former criminal safe-cracker. But his return to crime isn’t all it’s cracked up to be.

Every time Dom Hemingway opens his self-obsessed mouth, Dickie and everyone else in the quarter kilometer radius is met with a string of f-bombs punctuated with other words.

At least he’s got the undying if also perplexing friendship of his terminally Hunter S. Thompson-wardrobed friend Dickie (a terrific Richard E. Grant), a literally one-handed voice of sanity trying to reason with the nonstop hot air of Dom Hemingway’s wind. Every time Dom Hemingway opens his self-obsessed mouth, Dickie and everyone else in the quarter kilometer radius is met with a string of f-bombs punctuated with other words. No matter the topic, Dom Hemingway’s choice of words is virtually the same – it’s apparent that the man only ever really knows two words, and both of them are the f-word. And prison life didn’t exactly improve this situation. 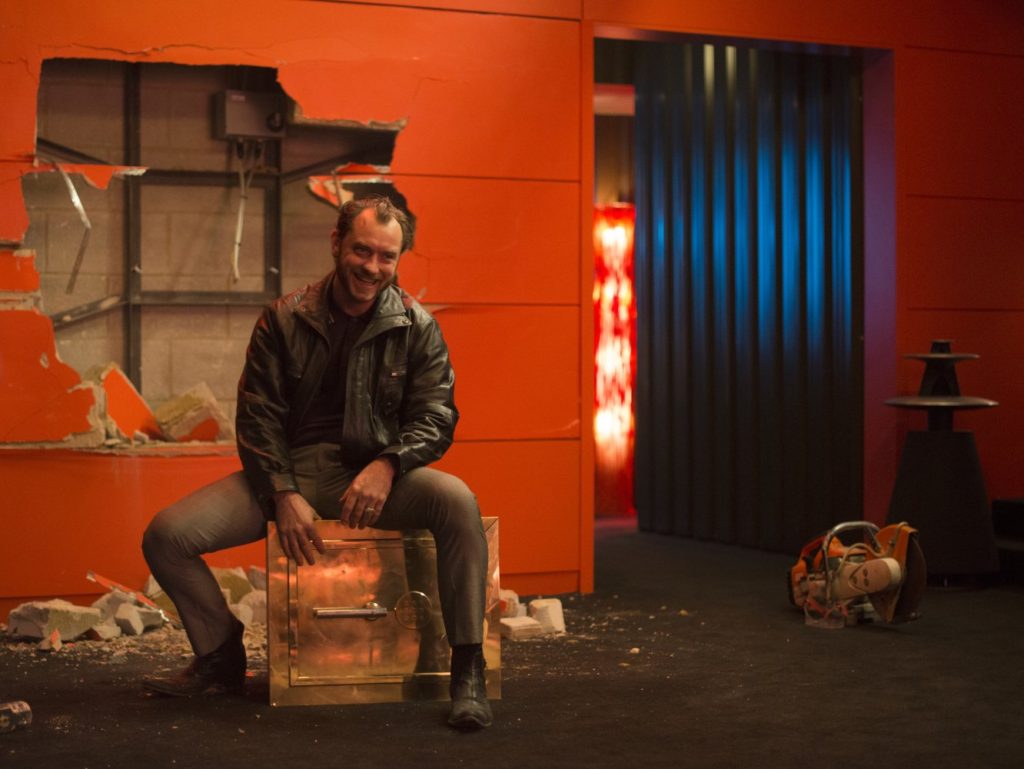 Like Dom Hemingway himself, the film wants what it wants, and is never not loud about it. Imagine a less hyper Lock, Stock and Two Smoking Barrels-era Guy Ritchie version of a criminally twisted Will Ferrell Saturday Night Live character, and you start to get the vibe. If lewd humor and over the top characters are funny, then Dom Hemingway is genuinely hilarious. It’s colorful, absurd, rawkish, and ham-fisted. The what’ll-he-do-next factor is quite effectively high for the title character. He doesn’t just hit on a bloodthirsty crime lord’s girlfriend right in front of the guy, he demands her of him. (Demian Bichir is the crime lord, Madaline Diana Ghenea is the girlfriend.) He goes for an angry naked stroll outdoors to blow off steam. He hits people. He wrecks cars. He can’t stop talking about himself. He’s the life of a party that no one wants to be at. And Jude Law nails it to a tee. Spending time with this barely human tinder box of inappropriateness, from this side of the silver screen at any rate, is truly laugh-inducing. Law’s eyes are full of fire, even when the movie decides it’s time to go soft, and reels the fighting fish in for a life lesson or two.

And that’s where Dom Hemingway runs out of vigor. As lame as it to have to sit through Ron Burgundy learning a thing or two about sensitivity, and/or life outside his sphere, and/or there’s more to life than his own happiness, Dom Hemingway, for virtue of having been that much more violent and unhinged, is all the more gimpy for it. It’s the point in the film where Dom Hemingway becomes just plain Dom. He realizes that by George, he has a family! And for that, his life has to change for the selflessly better. It’s a virtuous thing, certainly, but quite ineffectual as an emotional coda for the laugh-along misadventures of a chronic misbehaver. If that Will Ferrell SNL sketch I detailed earlier ended with a 7th Heaven moral tag, you might get the idea. But blimey mate, this is simply not that movie. A touching character arc is not the successful hallmark of any good SNL sketch, even the feature-length ones. 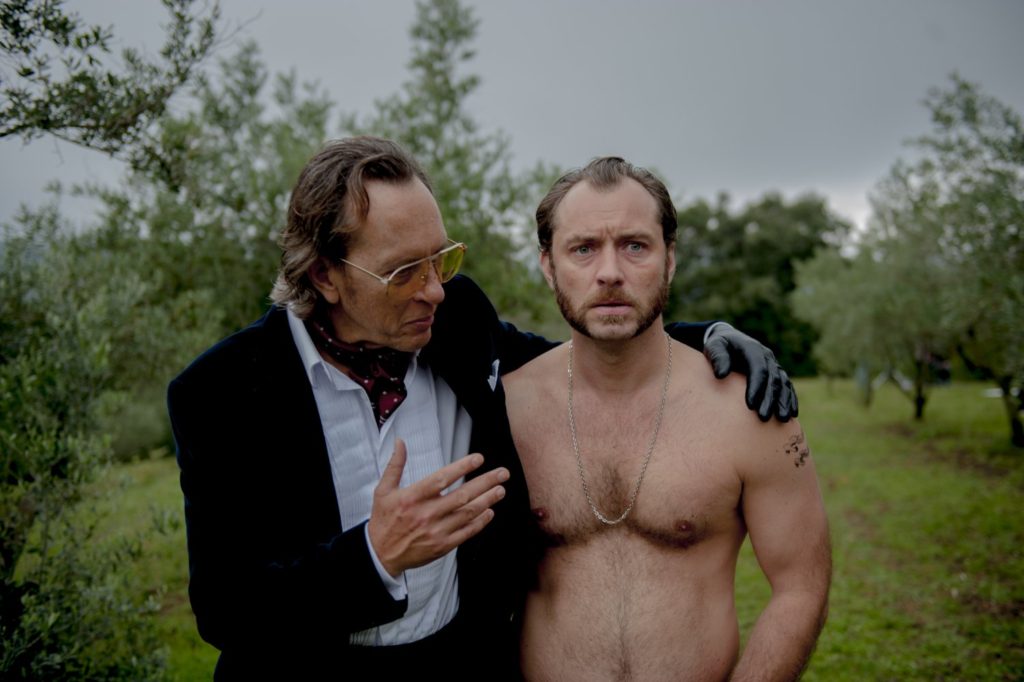 But can this man ever truly chill out?

But, no harm no foul – for those okay with an amusingly ridiculous Wolf of Wall Street amount of swearing, and maybe a quarter that much exposed flesh, Dom Hemingway will provide the kind of movie gut punch that you like. You won’t necessarily like all of it, but you’ll have had a good time. Like a bad night out that you only care to remember part of, Dom Hemingway will stick with you. Heck, even in the noticeably slower second half, there’s a solid moment of some of the best movie tension so far this year, capped off with a clever bit worthy of Tarantino. Only, Tarantino would’ve earned the aw-how-touching family realizations that quickly follow.

So it’s not perfect. But like it or not, Dom Hemingway IS Dom Hemingway. And I for one will give it a hand… if it’s only one hand. 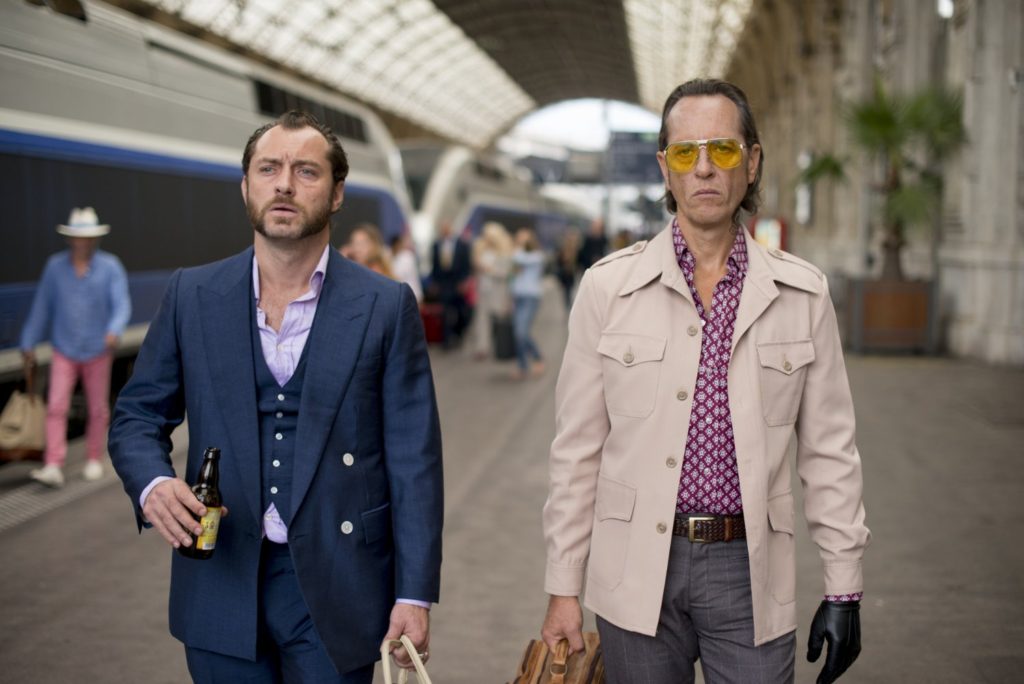