Film Review: HOW TO TRAIN YOUR DRAGON 2 (Dave Henry)

HOW TO FAIL YOUR DRAGON

The New “Dragon” Movie is Pretty But Hollow 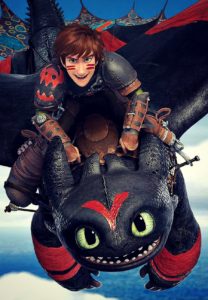 How to Train Your Dragon 2 is the kind of movie that is fairly watchable at first.  It manages to get most of the tangible details right, more or less.  It’s gorgeously animated and features great voice acting.  The character designs are creative, and the movie has a nice sense of scale.  There are also a couple of well-directed action sequences, and a few beautiful moments involving characters we’ve already come to know and love.  Until the credits roll, it’s inoffensively entertaining enough.  But once you’ve gotten home and had a chance to think about it, it pretty much falls apart.

This is because what works about the movie only works on the surface.  It looks and sounds pretty good, so a lot of people will probably give it a pass.  But these elements are mere Band-Aids plastered atop a festering wound; rhinestones bedazzled onto a dry, crusty turd.  That’s because the fundamental and deep-seeded problems with this film are all in the script:  an unfocused narrative, a weak story, muddled/mixed messages, and one-dimensional characters.

I suspect that it may take a while for folks to pick up on the significant flaws of this film.  It will probably do impressive numbers at the box office, coasting off the goodwill earned by the amazing first installment, which was one of the best films of 2010.  Plus, family films tend to play well, and kids will love all the new species of dragons this movie introduces (and likely beg their parents for all the new toys as well).  Even adult fans might have a little trouble finding obvious issues to criticize.  But give it time, and I’ll wager that this movie will fail to touch or move the audience in like the original did, and I seriously doubt that it will stand the test of time in the same way. 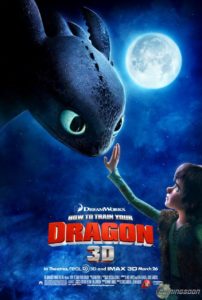 How to Train Your Dragon was a film that mattered.  It was a movie with staying power, not only because it was about something important (overcoming fear and prejudice—specifically of the “other,” or those who are different from us), but because it was laser-focused and expertly told.  The tolerance metaphor was itself wrapped in another metaphorical layer (horse training as dragon training), and this story was seen through the eyes of a single character who was central to the narrative.  Everything else in the movie—every relationship, every plot point—pointed towards Hiccup (Jay Baruchel) and his journey.  He’s in nearly every scene, and when he isn’t, characters are talking about him.  The development of both the story and the supporting characters are directly related to Hiccup’s story and his character arc.  It’s as tight and meaningful a narrative as you could ask for, without a single wasted moment.

But much like a band who puts out a terrific debut album and then whiffs into a sophomore slump, writer/director Dean DeBlois either used up all his best ideas in the first movie, or else he really needs to get back together with his original co-writer/director Chris Sanders for the already-announced How to Train Your Dragon 3.  If this is what going solo looks like, it’s time to get the band back together, because How to Train Your Dragon 2 strikes out all over the place.  Narratively speaking, the plot is a hodgepodge of loose threads that have little to do thematically with one another, forced together awkwardly and unceremoniously at the end.

From the get-go, this movie lacks a clear perspective.

There doesn’t seem to be any unifying vision, despite the fact that DeBlois is credited as the sole writer/director this time around.  Storylines are haphazardly abandoned only to be swept up later in a failed attempt at hasty resolution.  Hiccup is arguably the protagonist once again, yet he has little to do.  He barely impacts the plot of the movie, and when he does, it’s by rehashing narrative ground the last film already covered.  Worse still, he doesn’t follow through on any of his supposed purposes and/or goals—which seem to fluctuate wildly based on the needs of a script that seems more interested in introducing new toys than telling a compelling story.

In fact, no one’s wants, needs, or motivations are clear.  Characters change their mind abruptly, even so far as a 180-degree about-face, without adequate reason other than moving the plot forward.  But their reasons for doing anything that impacts the story are muddled at best and inexplicable at worst.  Even the cookie-cutter villain, a dragon master named Drago (Djimon Hounsou, whose talent is wasted here on a cartoonishly evil bad guy whose only definable or unique characteristics are only skin-deep) doesn’t seem to have any clear reason or point to his villainy.  He’s just bad because of…reasons?

The movie tries to compensate for all of this with on-the-nose expository dialogue.  Characters consistently talk down to the audience with paltry excuses for motivation and/or character development.  This is the movie’s way of half-assing it, straight-up telling us what it should be showing us—sometimes even while showing us the opposite.

Case in point—the idea of peacemaking through nonviolence is brought up several times.  Hiccup makes a big deal of defying his father’s wishes to go negotiate with Drago and try to find a peaceful resolution to avoid conflict, but this never happens.  In fact, Hiccup never changes anyone’s mind at all in this film, despite that being his sole stated mission—he keeps going on about how if he was able to change everyone’s mind in the last movie, surely he can do it again.  But his father, Stoick (Gerard Butler) insists that some people can’t be made peace with, and that any olive branch extended to Drago would be useless.[1]  And in the end, both Stoick and Drago are proven correct—might makes right, and violence, apparently, is the answer.

Now, I suppose it would all be fine and good to totally undermine the themes of the previous film, if How to Train Your Dragon 2 was meant to be a dark and cynical movie about disillusionment and seeing your ideals go down in flames.  But this film wants to have its cake and eat it too—it never stops shoving the message of “peace” in our faces—Hiccup even says in the final scene that they’re peacemakers—right after the movie actually shows us that non-violence doesn’t work.

Even more confusing, the movie actually sets up a possible solution for tangible, non-violent resolution, only to disregard it later.  How to Train Your Dragon 2 introduces the concept of the “Alpha,” dragon, a massive dragon who is able to somehow control all other dragons (this is different from the massive dragon who was able to somehow control all the other dragons in the first movie because shut up).  This is how Drago commands his dragon army—he’s in command of an Alpha who in turn commands the other dragons.  Exactly how Drago was able to break, train, and dominate a monster the size of an oil tanker is never explained, because of course it isn’t.  However he was supposed to have done it, though, it’s implied that his methods are cruel and brutal.  The movie draws a clear distinction between this and Hiccup’s method of training through love and understanding; after Drago takes control of Hiccup’s dragon, he’s amazed when Hiccup is able to break the Alpha’s spell over Toothless through the loving bond they share.  Now, a thematically consistent film would then show Hiccup using the same training methods he used on Toothless and the dragons of Berk, in order to win the respect and cooperation of Drago’s Alpha.  The villain’s hold over the beast would be broken, and good would win the day through non-violent means (which, remember, is exactly what the movie tells us it’s going to do beforehand).  This love-conquers-all message would not only be consistent with the previous film, but with the film that this movie is pretending to be.  But no – instead, Toothless just challenges the Alpha in physical combat.  Meaning that after expressly telling us that Hiccup and Toothless were going to prove Drago wrong, the movie has them go and do exactly the opposite.[2]

In the meantime, all this narrative gobbledygook is interrupted by the intrusion of another movie entirely.  Hiccup discovers that his mother is still alive, and then suddenly we’ve got a drama about a broken family coming back together happening off by itself.

What’s sad is that this storyline is the only part of the movie that even begins to approach the heart and soul of the first film.  How to Train Your Dragon 2 is at its best when showing the quiet moments between Hiccup, Stoic, and Valka (Cate Blanchett).  There’s one tear-jerker of a scene in particular—the best scene in the film—where Hiccup’s parents share a dance for the first time in twenty years.  It’s an island of pathos in a sea of mediocrity, and it makes one wish that this scene could be in a much better movie.

So why wasn’t it?  Why wasn’t this reunification the focus of the central narrative and theme of the movie?  It’s much more interesting and watchable—not to mention cathartic—than the boring subplot about the cookie-cutter villain that the other characters are left behind to deal with.  But thanks to all of that hot mess, the family story doesn’t get enough room to breathe and feels totally shortchanged.

The really frustrating thing about a movie like this—the thing that makes you want to bang your head against a wall—is that you can see the potential there.  There are germs of good ideas in this movie, and the raw material was great.  But it feels like every chance it had to do something right, How to Train Your Dragon 2 derailed onto a path of mediocrity.  The first movie left DreamWorks with riches of creative gold just waiting to be mined for years to come.  And yet all they’ve done is spun it into so much worthless straw.

[1] Those of you who remember the first film will recognize a bit of mirroring happening here—the progressive, optimistic son and the traditional, pessimistic father having a fundamental disagreement on how to approach a problem.  In the first movie, it was about how to deal with dragons—now it’s about how to deal with a dragon master.  Now, if this had been the movie’s thematic and narrative thoroughfare, it would have been a rehash of the last movie, but at least it would be internally consistent and could even serve to echo the first film’s themes in a grander context with higher stakes, while simultaneously building on those themes.  Instead, this conflict is just abruptly abandoned.

[2] So, there you go, kids.  The evil villain is right; violence is the answer.  Now go buy some toys.