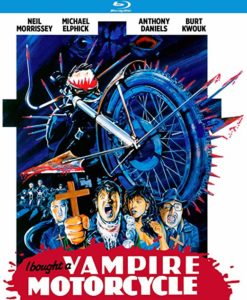 When buying a motorcycle, safety must come first.  Do the tires have sufficient tread?  Are the clutch and brake levers, mirrors, gear shift and switches in proper working order? Has it recently been possessed by an ancient evil spirit, rendering it a self-driving, blood-fueled homicidal death machine?

As admittedly rare as that last instance is in comparison to the preceding two, filmmaker Dirk Campbell’s 1990 comedy-horror lark, I Bought a Vampire Motorcycle, states the case for its inclusion on the list.  The film, the rare British super-low budget DIY affair, has the distinction of not only being the world’s only film starring a vampire motorcycle, but of successfully flogging both genres it belongs within.  In the conventional sense, the describers “comedy” and “horror” fit here about as well as a girlie truck mudflap fits on a beat-up Harley.  Anti-sexy and tongue-in-cheek as all get out, one can practically smell the re-ignited pre-teen hormonal suppression zinging around beneath the string of crazy death scenes, gratuitous puking, obviously fake body parts flying everywhere, pee, and poop.  (More on that in just a bit.)

Though Motorcycle is chock full of motorcycles and their revving, squealing, roaring and ripping, the film’s primary stock in trade is mutilation gore, with a healthy side serving of disgusting ridiculousness.

It all goes a little something like this… One night, an outdoor campfire seance is interrupted mid-incantation by a savage gang of attacking bikers.  Amid the heavy metal fray, the evil spirit manifests in one of the participants.  That lasts all of about a minute, as the possessed guy is dispatched over a nearby parked Norton motorbike.  His blood goes into the gas tank, which can only lead to one thing… EVIL MOTORCYCLE. 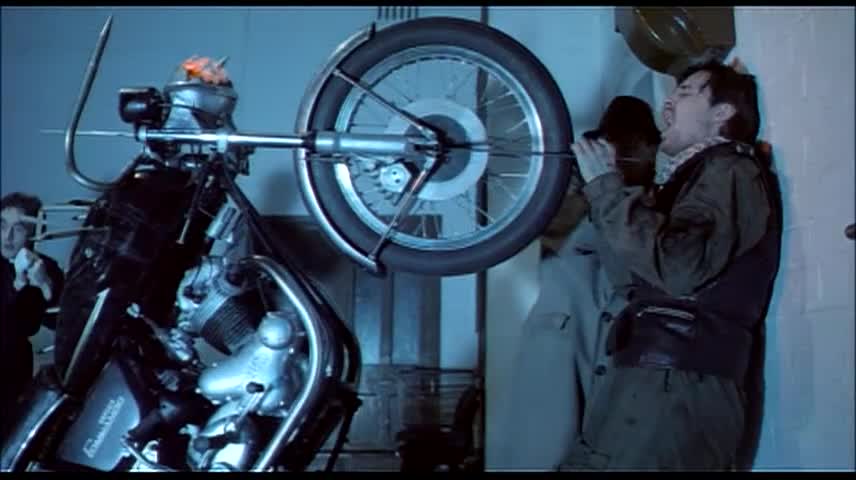 Do not taunt the vampire motorcycle.

Not much later, when dopey everyman Nick “Noddy” Oddie (Neil Morrissey- Men Behaving Badly) purchases the bike, he’s shocked, shocked to experience its self-driving demonic rampages through the night.  Never mind that he overpaid for the thing (don’t tell his girlfriend!), all this menacing murder has got to come to a full stop!  Before long, he’s facing off against not only his own spiky ride, but the very angry biker gang from the beginning of the movie (prompting a bar brawl just might wield the distinction of being the Worst Fight Scene in Cinema History), as well as a talking turd that lunges forth from the water of his toilet, gagging him.  Yes, that really is a scene.

So.  If, let’s say, the Twilight series represents the accessibly romantic far edge of teenage girl-skewing vampire films, then I Bought a Vampire Motorcycle is a hard stop at the opposite edge of such a spectrum.  Meaning, this is the perfect movie for the Beavis & Butthead set, mercilessly unrelenting in its wallowing lowbrow dreck.  Though Motorcycle is chock full of motorcycles and their revving, squealing, roaring and ripping, the film’s primary stock in trade is mutilation gore, with a healthy side serving of disgusting ridiculousness. 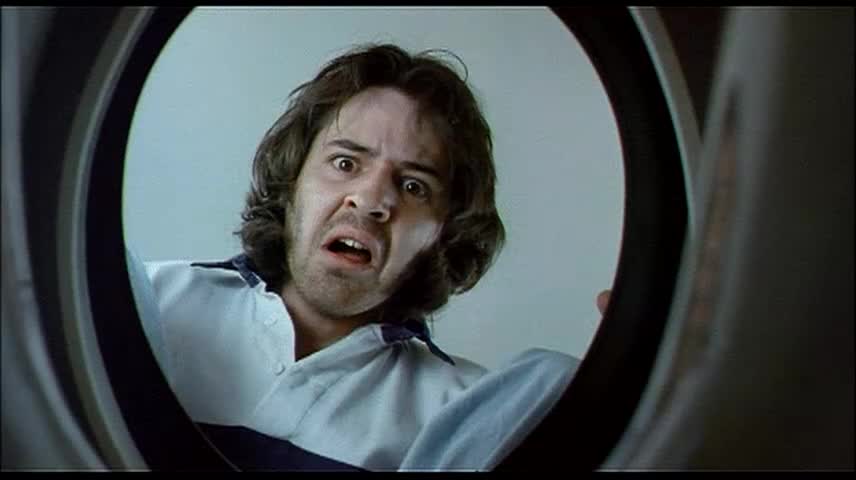 Rarely utilized in cinema, the talking-turd’s-eye-view.

At this point, I know what you’re wondering:  “Yes, but how does I Bought a Vampire Motorcycle track in terms of the theology of vampiric lore?”  Classicists will be happy to know that the traditional symbolic deterrents for the fanged undead carry over fully when it comes to repelling the vampire motorcycle.  Crucifixes, crosses, holy water, garlic, and all manner of daylight positively negatively effect the murderous, marauding mechanical terror on two tires.

And with that burning matter laid to rest, I also know what your next question is: “Yes, but is C-3PO in this film?“ No, he’s not. But, I Bought a Vampire Motorcycle gives us the next best thing- the man who plays C-3PO, Anthony Daniels, has a very prominent part in the film!  And no, although Daniels has more experience than most when it comes to portraying a machine, he does not play the titular motorcycle.  Instead, he plays “the priest”, who is brought into the fold around the midway point.  With his array of crucifixes, crosses, holy water, and whatnot, he’s all ready to “go kick some bottom”.  Which, conveniently, loops us back to the previous question of the theology of Vampire Motorcycle vampire slaying. 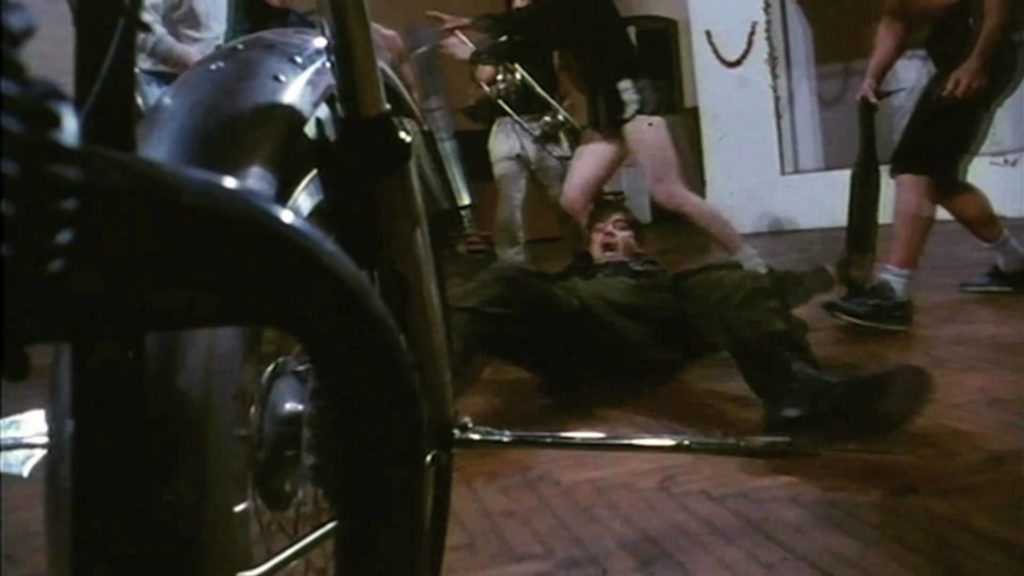 The new Blu-ray edition from Kino Lorber is certainly something, as opposed to nothing.  All these years later, the key members of the production staff appear to remain tight mates, ribbing each other and regularly cutting up in their self-created bonus retrospective features.  On the feature length commentary track, full of forthright meandering chatter and much chuckling at their own work, it’s openly lamented that the notion of the vampire motorcycle being invisible in the rearview mirrors of vehicles it’s chasing was a funny detail that didn’t occur to them until after the movie was finished.  They’re also quite apt to point out that the bar brawl is the Worst Fight Scene in Cinema History.

If someone were to somehow prove that this film has ever looked and sounded any better than it does here, this critic will gladly renounce his leather chaps.  Not that Kino’s I Bought a Vampire Motorcycle is exactly A/V home theater reference material (nor should it be), but it’s absolutely fine.  With a few other goofy new extras (three-minute gag videos about the motorcycle’s final resting place- the director’s shed; a fake “where are they now?” bit, and a legit forty minute Making Of documentary, with the participation of just about everyone) fans should be fired up for this release.  (Now!  To find the I Bought a Vampire Motorcycle fans…!  Yoohoo, fans…!  This one’s for you!  Fans…?)

Though anyone partaking alone in I Bought a Vampire Motorcycle may tire of the ride, this Brit horror-comedy might just be just the ticket when wondering which whacked-out weirdity to wheel out for your next party.  Gather your entire gang of sickos, rev this sucker up, throw safety to the devil wind, and prepare to lose your heads.