A Creepy and Atmospheric Tale That Winds Up as Murky as it Namesake. 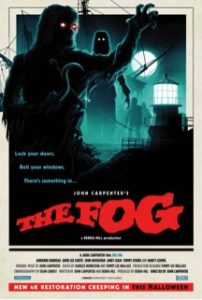 The Fog begins, appropriately, with a ghost story. John Houseman (The Paper Chase) sits at a campfire with a group of schoolchildren. He informs them that it is exactly five minutes to midnight, and they have time for just one more story. The story he tells is of a sailing ship transporting lepers to a new colony, on a foggy night, exactly one hundred years ago. The ship mistakes a campfire, much like the one the group sits at now, for a lighthouse, and that mistake costs everyone on the ship their lives. When the fog arises again, the dead will walk the earth, seeking revenge. It’s an atmospheric beginning that perfectly sets the tone for the movie that follows.

Set in the fictional North California town of Antonio Bay, John Carpenter’s The Fog tells of the night that the fog does return, and the unsuspecting townsfolk find that old ghost stories have more truth to them than anyone could suspect. As the anniversary of the wreck approaches, a series of strange events sweep over the town. Car alarms go off unprovoked, the electricity flickers for no reason, and glass suddenly breaks. In the old church, a portion of a wall collapses, nearly killing Father Malone (Hal Holbrook). Behind the fallen masonry, Malone finds an old journal that might hold the keys to the horrors that are to come.

Elsewhere, Nick Castle (Tom Atkins) picks up a young hitchhiker, Elizabeth (Jamie Lee Curtis, fresh off of working with Carpenter on Halloween). When the windows of his truck suddenly shatter, they’re able to dismiss it as an odd happenstance. But as more and more “odd happenstances” begin to occur, the two come to believe that there’s more going on than reason allows.

San Antonio’s leadership doesn’t have time for any of this, however, as they are busy preparing for the 100th anniversary of the town’s founding. A councilwoman, played by Janet Leigh- Jamie Lee Curtis’s real-life mother- has planned a ceremony with speeches, a candlelight stroll and an unveiling of a commemorative statue. She and her harried assistant (Nancy Loomis, also from Halloween) have too much to do than to be bothered by some old ghost stories.

And throughout it all, the town’s local DJ, Stevie (Adrienne Barbeau, Escape From New York, Creepshow) serves up a sweet selection of smooth jazz tracks to keep folks company during the night. Her son finds a strange piece of driftwood on the beach- wood that might have come from the very shipwreck that occured 100 years ago. The wood suddenly bursts into flames revealing the sinister warning that ‘6 MUST DIE!’   An overprotective mother, she forbids her son from bringing anymore driftwood home.

So there’s a lot going on in the setup here, and we didn’t get into the hapless fishing boat that gets caught in the strange fog while out at sea, or the lonely meteorologist who only has his nightly phone calls to Stevie to look forward to. Carpenter and his producer/co-writer and frequent collaborator Debra Hill put a whole lot of stuff on their plate. But it doesn’t ever gel together into a unified whole. Jumping back and forth between all the various plot threads makes the storytelling feel choppy and elements that seem like they’re going to be important just get dropped and forgotten about.

Even just-okay Carpenter has a lot more style and character than many other director’s best efforts.

Still, as Halloween and The Thing demonstrate, Carpenter is a master at building and maintaining suspense. The Fog is certainly no exception to this. The mood building over the course of the film’s runtime is a slow burn of unease and foreboding. Something terrible is approaching Antonio Bay, and there will definately be a reckoning when it arrives.

Unfortunately, unlike Halloween and The Thing, The Fog fails to stick the landing. When the titular weather phenomenon arrives, bearing with it the dead sailors, it’s… underwhelming, actually. The fog itself is suitably eerie, creeping over the town in a way that reminded me of the ‘Angel of Death’ sequence from 1958’s The Ten Commandments.  But the story never really comes together in the end. Carpenter and Hill were reportedly unhappy with the movie after test screenings, and reshot much of the movie’s ending. The seams show. The action, taking place in two different locations, like much of the rest of the movie, feels disconnected from itself. It’s like watching TV with someone who keeps switching channels between two different movies.

The movie looks great. Carpenter and his cinematographer, Dean Cundey (Escape From New York, Apollo 13) capture the landscapes around Point Reyes beautifully. Rialto Pictures is re-releasing The Fog in select theaters across the U.S.  starting on October 26 with a new 4K restoration. The screener I was provided was, alas, not the new 4K print, but it’s clear this is going to be one gorgeous looking film. If you get a chance to see the restored film in a theater, do take it (playdates for the film are found here). It’s not really among Carpenter’s best work, but even just-okay Carpenter has a lot more style and character than many other director’s best efforts. And besides, who wouldn’t want to see that closeup of Worm-Face on a big screen!