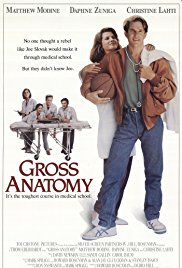 Gross Anatomy is the story of a poor young man named Joe Slovak (Modine) whose dad is a fisherman.  Joe has largely been able to achieve what he has by being extremely bright, but too often relying on his charisma to cover up for his smug attitude and tendency to never take anything seriously.  This is largly how he comes to join a medical school where he is enrolled in the Gross Anatomy course of Dr. Rachel Woodruff (Lahti), who sees far more potential in him than he sees in himself.  As a result, she tends to single him out to the chagrin of his lab group.

Slovak is only in that particular lab group to pursue a beautiful fellow med student named Laurie Rorbach (Zuniga), a woman who doesn’t think life is a joke, who works very hard for what she is trying to achieve.  The lab group also includes Joe’s roommate David Schreiner (Field) a man who starts off opposed to Joe’s loud, outgoing behavior but warms up to him when he sees his good nature, as well as the uptight kiss-up Miles Reed (Clough), and the married-with-one-child fellow student Kim McCauley (Carter), who has to divide her attention between her schooling and her family at home. 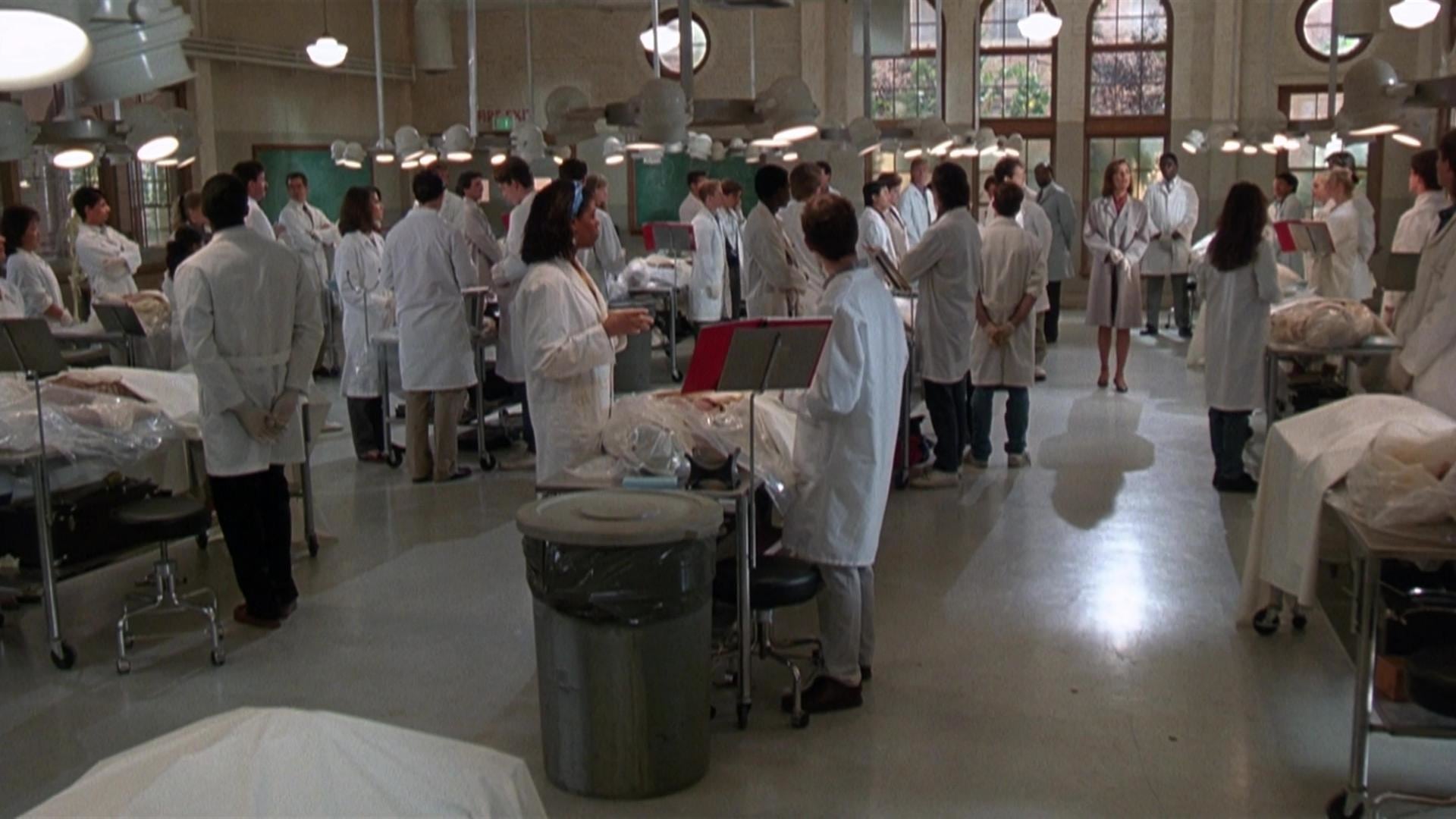 Like many 1980’s romantic comedy-dramas, Gross Anatomy hits a lot of the typical beats.  Boy doesn’t take life seriously, boy meets girl, girl likes boy but can’t fully commit until he grows up, something happens to cause boy to take a long look at himself in the mirror, boy seeks to apply a life lesson he has learned and thus find success in life as well as love, is a typical kind of theme.  The Paper Chase is a natural comparison point, as is Modine and Zuniga’s previous film together, Vision Quest, which both utilize some of these basic plot points.  Lahti’s role as the tough but caring mentor teacher adds some emotional depth that helps this film rise just above being  another film in a sea of similar such plots, and fortunately the film is not as terribly dated by the 1980’s setting and music as other films of the decade are.

This Blu-Ray release of Gross Anatomy from Kino Lorber Studio Classics features an audio commentary from director Thom Eberhardt, where he picks up these plot points and discusses the scenes, adding little tidbits here and there.  One of the more interesting things he does provide, however, is a description of how the Disney company was functioning back in 1989.  Michael Eisner and Jeffrey Katzenberg had just come over and were seeking to bring the Disney brand back to prominance.  Their solution, Eberhardt says, was to increase the number of film productions each year, and instituted a strict studio system where every single decision was run up the chain of command and back down again before implemented.  Eberhardt describes a scene in the film where Zuniga replies to Modine sarcastically.  She does this naturally in the film, but Disney brass, prior to filming, sent word down the chain of command for Eberhardt to have the screenwriters include it in the script.  He did so, and then the script was sent back up the chain of command for approval at which they communicated back down to Eberhardt that this was good, but maybe it should not read “(Sarcastically)”, but (“Not too Sarcastically)”. 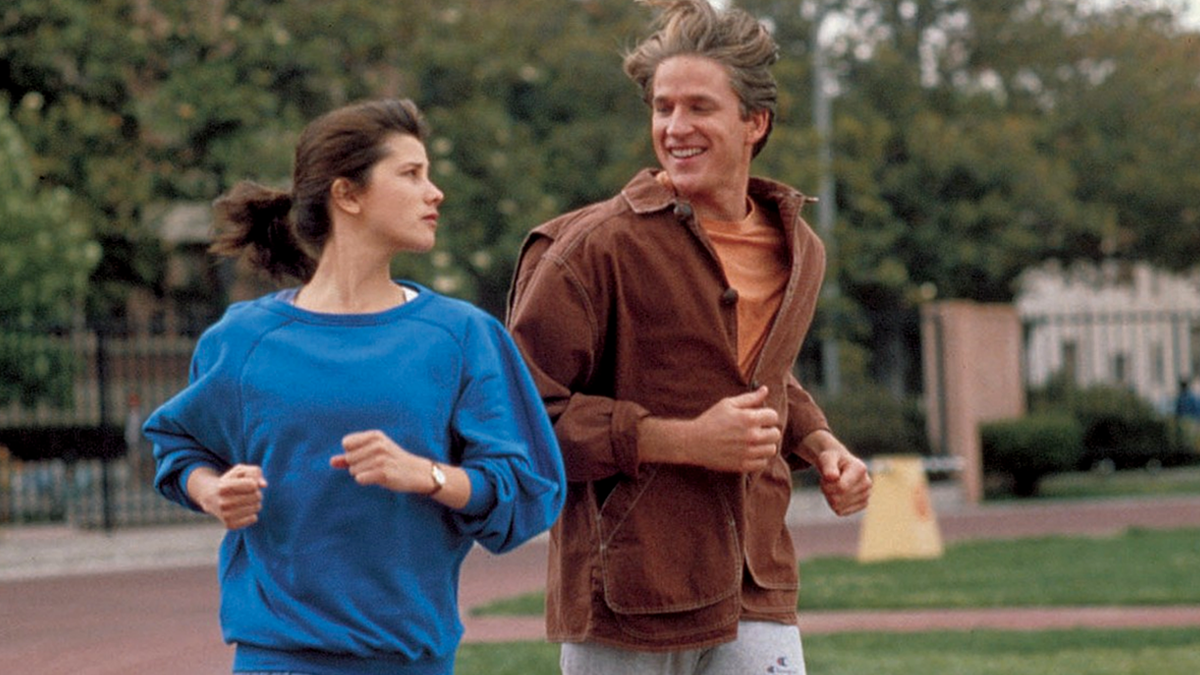 While this seems to be a painstakingly cumbersome process to work under, Eberhardt does give some historical perspective at just how bad off Disney was at the time (remember that this was just prior to finding success in animation again with The Little Mermaid, also released in 1989).  The process may have been too controlled, but given how far away the studio seemed to be from its glory years, it is an approach that was probably needed at the time in order to establish new operating norms and standards at the company that would lay the foundation that would propel it forward.  Of course Eisner was given much credit for Disney’s turnaround in the 1990’s and today the company is now a behemoth, having gobbled up Marvel Studios, Pixar, Lucasfilm, and most recently acquiring 20th Century Fox.

Besides this commentary, the Blu-Ray of Gross Anatomy features the original theatrical trailer.  The film is presented in color, with a running time of 109 minutes, and has a ratio of 1.85:1, 1920x1080P.