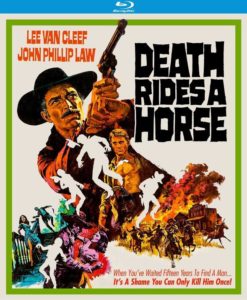 Giulio Petroni’s spaghetti western starts out feeling more like a Mario Bava giallo, with pitch dark rain and howling winds mixing into another great Ennio Morricone score (“borrowed” by Tarantino for Kill Bill Vol. 1) – in any case, a grand, Italian affair, and all prelude to the operatically vicious, laughing violence germane to the subgenre, in this case the murder of a young boy’s entire family in front of his weeping eyes, a scene that brands itself upon the innocent boy’s brain with punching snap zooms and catapults him into a life of wanton, cinematic vengeance. One edit and fifteen years later, he’s John Phillip Law, and he’s the sharpest shooter in the west, a singular goal stretching out before him across the steaming Italian desert: revenge.

Ironically, Law eschews the law, preferring to do his payback unencumbered by anything as square as a written code. Along his journey he meets just-released prisoner Lee Van Cleef, an aging man hunting down the gang of thieves that framed him – and when they realize they’re looking for the same group of varmints, the two play reluctant tag-team, burning out a classic tale of generational faith-building: the young knee-jerk sharpshooter getting schooled by the old and wise gunslinger who’s been around the saloon once or twice, until finally the movie teases out a kind of declaration of love between this ad-hoc father and son, just as its writer, Luciano Vincenzoni, had done earlier for Van Cleef and Clint Eastwood in Sergio Leone’s For a Few Dollars More (1965).

As in any Italian western, we must lay plot logic aside and let the rules of the subgenre wash over us, the fast-and-loose ones that allow two hate-filled men to find each other, both looking for the same set of bad guys to put holes into. Once the larger-than-life story tropes like “entire family slain in front of young boy’s eyes” and “framed man of grace sets out on quest of vengeance” are established, the movie settles into a calmer explication of laissez-faire pistol packing.

But what makes this one feel original, in terms of the visual side dishes that accompany any spaghetti western, is that it’s using the tropes of the subgenre not to paint epic vistas of elemental emotion like Leone, nor to push the tropes into strict and stand-alone cartoon entertainment, like so many of the rest, but to tell a straight story of tit-for-tat in the most even sense possible. In this iteration, Leone-like close-ups on eyes aren’t just filmic affectation, they’re call backs to a little boy’s anguish, the reason for his revenge, imbuing the fun cinematic shtick with powerful movie-sense and story progression. Throughout, you get the sense this western is taking itself seriously in the rightest of ways while also getting to wallow in the grandiose, nigh unto tongue-in-cheek whip pans, snap zooms, close-ups, and prosciutto-fisted dialogue.

Kino Lorber’s presentation includes a commentary by spaghetti western maven Alex Cox, who brings his genre-centric expertise (he wrote a book on spaghetti westerns called 10,000 Ways To Die), sprinkling the occasional cheese with the edifying flavor of validation, while the picture is as it should be: grander than any mere DVD image, but still preserving the occasional blemish, scratch, and “hair in the gate” from the original, the better to accompany the rainy, indoor Saturday that is the prime rally time for such an ornery band of outlaws.

Except where noted, the images in this review are not representative of the actual Blu-ray’s image quality, and are included only to represent the film itself.