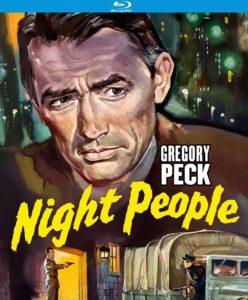 Compelling from its very title, this under the radar Cold War-era thriller, set and shot in the divided city of Berlin in the mid-1950s, intrigues on multiple levels in its depiction of double-, triple-, and even quadruple-dealings between the occupying forces of the United States and the Soviet Union. An American GI kidnapped in West Berlin sets off a series of nighttime “negotiations” between the American armed forces and their East Berlin counterparts, where both sides traffic in the stark and uncompromising terms dictated by the morally complex geopolitical situation: the exchange of human souls. Married veteran cabaret performers, an absinthe-addicted female double agent, a powerful American industrialist from Toledo, Ohio, a weathered Lieutenant Colonel in charge of the trade-off between the elderly couple and the missing GI, and the larger trade-off between open armed conflict and continued hostile subterfuge are the main combatants in a deepening drama between West and East. In this twilight struggle, they are divided Berlin’s Night People.

Gregory Peck stars as Lt. Col. Steve Van Dyke, in sole and wearied charge of the operation, opposite Broderick Crawford as axle grease magnate Charles Weatherby, whose GI son has been night-kidnapped by Soviet agents before the credits roll, and, finally, coiling through the film’s plot and plotting, Swedish actress Anita Bjork as Van Dyke’s personally-groomed East Berlin contact (and occasional lover) Frau Hoffmeir. Set a few years before Berlin raised its famous Wall, the then more fluid boundaries between West and East nonetheless raise steel curtains of divided loyalties between its ever-compromised participants.

When Van Dyke takes Weatherby out for an apparently innocent outing at a nightclub, the piano player and her blind husband providing the evening’s entertainment are in fact the very couple whose sacrifice may ensure Weatherby’s son’s return; similarly, when Hoffmeir’s dossier later crosses Van Dyke’s desk, he must question whether the “Hoffy” he knows (and has loved) is in fact the Hoffy who ever was. A drama unfolding in bland offices, blander military corridors, and the postwar backdrop of West Berlin’s purposefully nondescript “economic miracle” (in this film, East Berlin, as in all films up until an astonishing movie recreation in Steven Spielberg’s 2015 Bridge of Spies, remains squarely drawn behind a literal and metaphorical veiled curtain), the armed military escorts, the shuttered paddywagons, and the shroud-draped and bolt-strapped hospital gurneys, per the film’s title again, only venture beyond the borderpoint under the cover of night.

This A+-production from Twentieth Century-Fox, released in their house anamorphic widescreen process of CinemaScope the year after the studio’s The Robe and How To Marry a Millionaire (both 1953), nonetheless seems curiously flat throughout, possibly due to the “big” style of its presentation. Like Carol Reed’s The Third Man (1949) or his later Our Man in Havana (1959), the convoluted terms of the postwar spy thriller seem best realized by the chiaroscuro melding of black-and-white into varying shades of gray; the tight-framing of the image and the tighter-framing of its actors more powerful when quarrelsome exchanges and deceptive maneuverings are stylistically forced to be transacted in tension-ratcheting close-ups and fluid camera movements as opposed to static compositions stretching room-length.

But Night People is surprisingly spry for the sometimes arid qualities of its stylistic presentation, with the sometimes stolid Gregory Peck light and wry in his solid lead performance. First-time director Nunnally Johnson, a uniquely-positioned writer and producer whose credits go back to the earliest sound era, and who had previously penned and produced such classics as John Ford’s The Grapes of Wrath (1940) and Fritz Lang’s The Woman in the Window (1945), hones a well-crafted nighttime atmosphere which in its best sequences, particularly those towards the tricky “exchange” at the film’s climax out the backdoor of a military hospital, approaches the moral twilight that a 1:37:1 black-and-white monaural presentation, as opposed to the 2:55:1 Technicolor multi-channel sound presentation, (for all you tech-heads out there) might have more effectively achieved.

But the latter does look great on Kino Lorber’s new Blu-ray release of this persistently unavailable home video title, and is all the more valuable for its first-ever presentation in the full dimensions of CinemaScope’s curved-rectangular width. This somewhat forgotten, and certainly overlooked, title also comes with a recently-filmed interview with three of star Gregory Peck’s children, and gave this viewer an interesting perspective on the working relationship between the film’s star and director. Despite the tensions that erupted in occasional conflict throughout Night People‘s location shooting, the pair would later collaborate in one of the key cultural and cinematic works of the 1950s, 1956’s The Man in the Gray Flannel Suit, whose very title would be emblematic of postwar disaffection for breadwinners of America’s Greatest Generation. Together, Night People and Gray Flannel Suit offer invaluable cultural and thematic snapshots of its era and, as such, could even prove an interesting diptych of the 1950s as stretched across America’s widest screens.