They may be Threadbare From the Get-go, but These Underpants Don’t Stink. 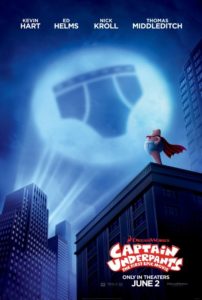 Captain Underpants: The First Epic Movie, as fun as it is and wants to be, is an all-too-obvious case of “the emperor has no clothes.” Or in this case, “the super-hero has quite limited clothes”. Perhaps he left them in the bathroom? After all, that’s where this entire concept resides. A very clean, very universal bathroom.

Although the title character is an out of control nut bounding about in briefs and a cape, the filmmakers are self consciously always dropping reminders that they know which end of the pool they’re peeing in. The unspoken commentary track is “Look, we recognize that our toilet humor is the lowest common denominator, it’s also like crack for the junior set. But fear not, good moviegoers…! Here’s a quick quip about cultural devaluation of educators. And, another about the importance of creativity in the lives of kids. So with that out of the way, here’s a giant monster toilet and another half hour of poop jokes.” Sure it’s kind of smart, but it’s also exhausting.

But, do the kids that this movie is aiming for even know what comic books are, much less have any desire to create them? It’s just one of so many ways in which the very foundational basis of this movie is fundamentally, if unfortunately, antiquated. The filmmakers know that they dare not slow down, for fear of being recognized as such. Like I said, they’re not stupid. 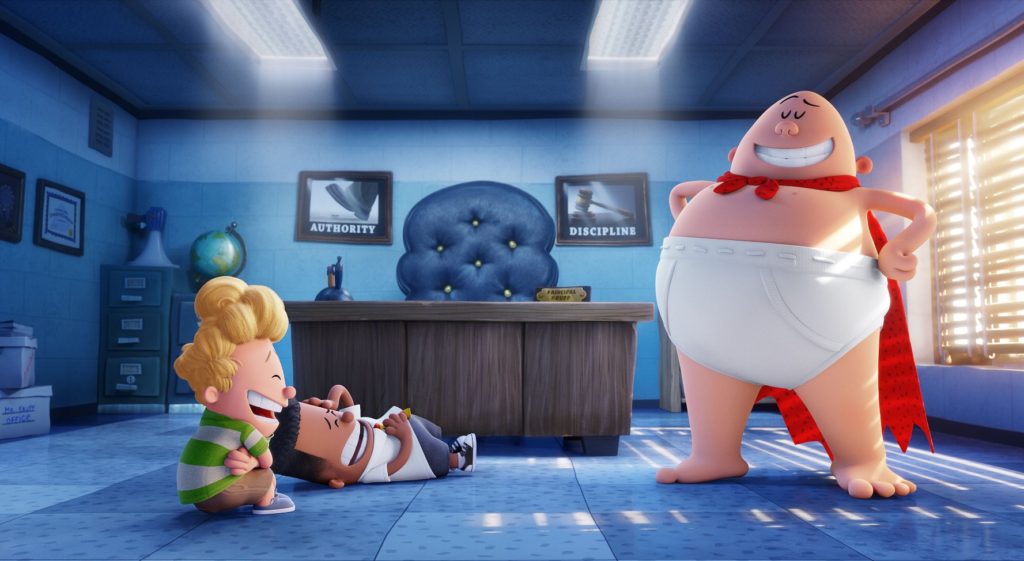 That’s to say nothing of their title character himself, personifying the very cliche-ridden super hero spoof that was tired fifteen years ago. Only here, it’s literally stripped down. This is, after all, the age of the Marvel Cinematic Universe and the Zack Snyder-izing of Marvel’s Distinguished Competition. It’s been more than five years since DC took Superman’s underpants away. That’s ancient history to the youth market.

And, if that’s the case, the Bud Collyer radio version of the Man of Steel must hail from an unfathomable Mesozoic era. But of course, that’s the basis of the generic superhero spoof that is Captain Underpants. Kids, nor even their parents, have likely ever witnessed anything close to a serious superhero standing fists-on-hips and declaring his presence in a ridiculously comical deep voice over a musical fanfare. Yet, the spoof is in the very ether of our popular culture. Precise point of reference doesn’t matter, just know that this bald guy with a towel around his neck who sings his own entrance theme is a joke. 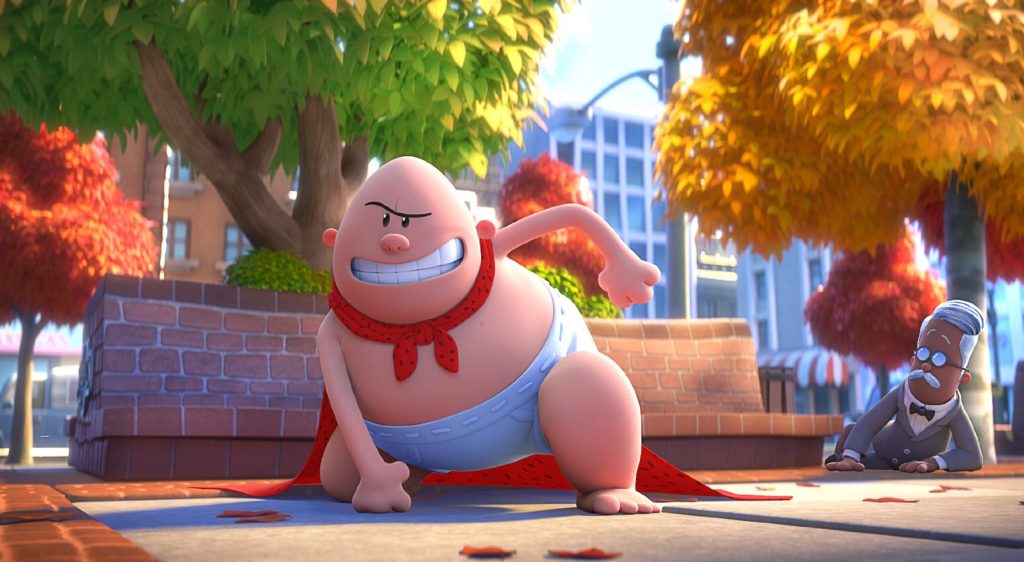 Captain Underpants, based on the long series of popular kids’ books by Dav Pilkey, is meant to resemble a slam-bang whiz-bam ADD kids movie of today – and it is one. Yet, with rapid-fire attacks of non-graphic bathroom humor, it blissfully plows over the fact that it’s actually built entirely upon arcane references and humor deriving from their grandparents generation, if not earlier. Much of Captain Underpants‘ schtick doesn’t quite date back as far as the historical beginning of people pooping and peeing, but it might as well be that old.

Those unfamiliar with the books might be surprised that the only mention of the title character in the first half-hour is almost in passing. The actual main characters of the story are two grade school boys who’ve bonded long ago over a mutual love of super heroes and bathroom humor. With shared interests like that, the true miracle is how these particular boys as kindergartners found each other, as opposed to any other kindergarten boy.

Nonetheless, these boys, George (voice of Kevin Hart) and Harold (Thomas Middleditch) are special in their world. Fueled by pure imagination and unbound creativity, they hang together 24/7. Think Phinias & Ferb stuck in the bathroom for ninety minutes. Their favorite thing to do is collaborating on their own characters and comics, the coolest of which is Captain Underpants. (“You know how everyone says superheroes look like they’re running around in their underwear? Well this one actually does!”) 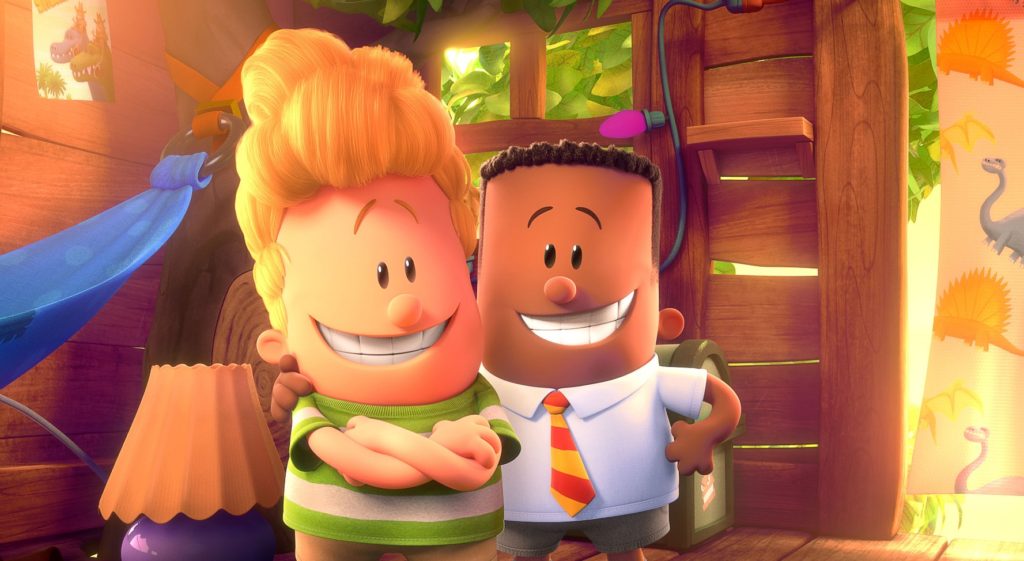 They are classmates at Jerome Horowitz Elementary, it bearing the true namesake of Three Stooges icon Curly Howard (yet another reference that kids and even most of their parents won’t get), and not to be confused with La La Land producer Jordan Horowitz – the true-life Greatest Hero in Hollywood History.

When a wacky fluke incident transforms their cranky school principal who’s been threatening them with separate classrooms (“Nooooooo!!”) into a real world version of Captain Underpants (Ed Helms), the poo really hits the fanboy fan. Also, it leaves the movie without an antagonist.

Of course, there’s always the good Captain’s reign of chaotic shenanigans to deal with. The boys reluctantly realize that their homemade hero is doing more harm than good, and that it’s time to change him back into the principal. Even if that means… separate classrooms. 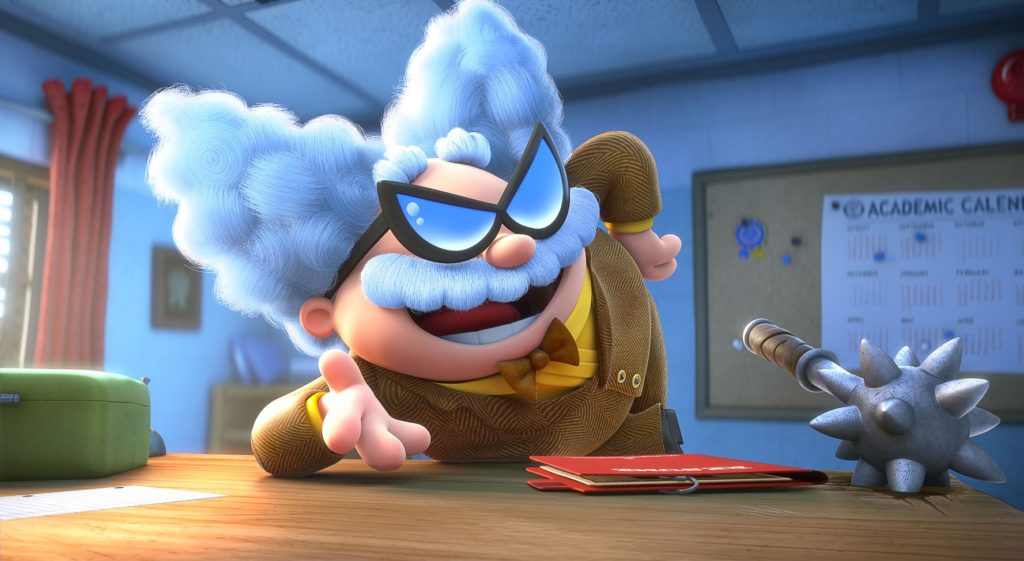 Enter Professor Poopypants, a sawed-off little edu-despot voiced by Nick Knoll, doing a distractingly similar version of Steve Carell’s Gru. When he decides to unleash his giant rampaging robo-commode upon the unsuspecting populace, it turns out the that world could use a hero after all. Time for director David Soren (Turbo) and screenwriter Nicholas Stoller (Neighbors) to play more of the hits, beginning with this old standard: “Captain Underpants to the rescue!!!”

This hyper paced beef-filled cheese-scape is precisely what anyone would expect when hearing the words “kid-friendly super-hero spoof”. Maybe this sort of thing was still novel in 1997 when the first Captain Underpants book came out. But twenty years and many actual pairs of underpants later, as the on-screen super-hero has evolved so radically, it’s hard to look at this and see anything other than a string of okay gags and a frenetic time-killer for the under-six set. The film may be many things, but “original” and “clever” – two virtues it extols loudly – aren’t among them.

While this most recent foray into manic animated venture doesn’t trigger indigestion, it may very well send patrons over the age of twelve looking for a break before the end. Yet, both in the end, and from the end, it all comes out okay. And based upon its title, it’s safe to assume the Captain plans to repeat on us.