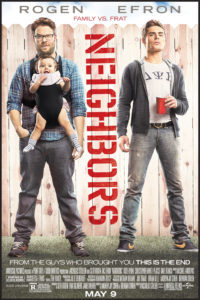 In a parallel universe, Neighbors could be a great comedy.  It has quite a few funny, red-band-trailer-worthy moments, and it features wonderfully funny performances from its gifted cast.  Unfortunately, all of that is in service of a mess of a movie that never comes together into any kind of cohesive whole.  The result is that as the film approaches the end of its 96-minute run-time (which feels like two hours), the movie’s shtick begins to wear perilously thin and the oft-repeated gags start falling flatter and flatter.

Neighbors is a film with an identity crisis.  It simply can’t figure out what kind of movie it wants to be.  It starts out as a parenthood comedy, introducing us to a new mom and dad who are learning to grow up in light of their infant daughter.  It’s almost like we’re seeing the next chapter in the life of Seth Rogen’s arrested man-child from the far superior Apatow comedy Knocked Up, after having traded up to the much-more-adorable-than-Katherine-Heigl Rose Byrne (complete with her cheeky native Australian accent).  In these initial moments, Neighbors is affable and winsome, and completely relatable to anyone who’s ever been a parent.  But this isn’t enough for the movie, as anyone who has seen the trailers knows already.

As Mac (Rogen) and Kelly (Byrne) are settling into their new lives, a noisy fraternity buys the house next door.  It’s a nightmare for parents of a newborn—the noise from the constant partying alone keeps the poor little baby up all night, and this is no type of environment to raise a daughter in—it’s a real case of “there goes the neighborhood,” as it were.

Now, Storytelling 101 would tell us that this is an instigating conflict that will provide all the things necessary for a well-told story – an obstacle for Mac and Kelly to overcome, which will both humanize them further and also provide a source for the comedy.  But instead of establishing the Fraternity as clear antagonists for our main characters to deal with (as the trailers would have you believe), the movie suddenly takes an awkward U-turn and turns into something else entirely.

Neighbors now abruptly establishes Zac Efron’s Teddy and Dave Franco’s Pete, the respective president and vice-president of the fraternity, as a new set of main characters/protagonists.  The film suddenly abandons Mac and Kelly for large stretches to explore Teddy’s dreams for the fraternity, the codependent relationship between the two brothers, the way they are growing apart as they approach graduation, and a love triangle between Teddy, Pete, and Brooke (Halston Sage), Teddy’s girlfriend with whom Pete is secretly in love with.  All of a sudden, Neighbors has become a college/frat/coming-of-age comedy.

Now, Neighbors has a big problem.  It has now set up two conflicting sets of characters who are fundamentally opposed to each other, only it can’t make up its mind as to which characters are the protagonists and/or antagonists.

From a narrative standpoint, that’s incredibly problematic at best, and a complete meltdown of the film’s identity at worst.  A better movie might solve this problem by introducing a common foe for the two sides in the second or third act, which would then require them to resolve their issues with each other in order to come together against a common enemy.  This would allow us to resolve the contradiction of protagonists fighting against each other, and we would be able to identify with all the characters as they united on the same side.  (Note—comics do this all the time, and have kind of mastered this storytelling approach.  Just two years ago, Joss Whedon’s The Avengers did this very well.)  But in Neighbors, this never happens, making it feel like the first act of a movie that’s been stretched out into feature length.  Worse still, having both sides at each other’s throats the entire time introduces yet another genre into the mix—the “Vs.” movie.[1] 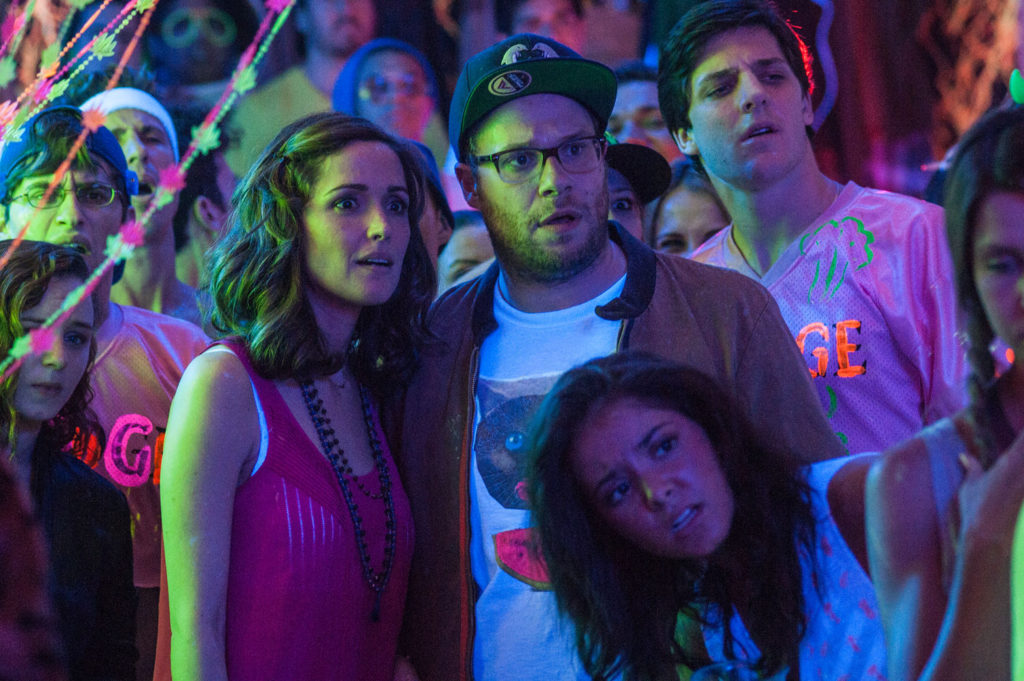 The “Vs.” movie is kind of an inherently campy genre, and lends itself well to comedy.  But here’s the thing—even the cheesiest “Vs.” movies know that you have to have good guys for the audience to identify with, so that when the bad guys start slugging it out with each other, it actually means something.  Whether it’s Frankenstein vs. the Wolf Man, Godzilla vs. Mechagodzilla, Freddy vs. Jason, or Alien vs. Predator, the theme is always the same—“whoever wins, we lose.”  But Neighbors doesn’t get this—it’s a “Vs.” film that wants to have it both ways—it wants each side to be the protagonist and the antagonist at the same time.  And so both sets of characters sort of get painted as likeable people who also do despicable and reprehensible things to each other.  This means that it’s really hard to identify with anyone.  We want to like Kelly and Mac, but how are we supposed to feel when Kelly comes dangerously close to date-raping by proxy?  We want to like Teddy and Pete, but how are we supposed to feel when they literally put an entire family’s life in real danger?

Contrast this to a much better comedy from earlier this year—Jason Bateman’s Bad Words, which featured a misanthropic, immature, petulant man-child as its protagonist—and yet he was the clear protagonist of a film that committed to him as a character that went through a journey that directly related to the centre conflict, thereby bringing us on board with him by the end.  Or look at last year’s This is the End, starring and co-directed by Rogan, featuring him and his friends as vain, self-important versions of themselves—and yet because they were pitted against common enemies and made character progress through those obstacles, it worked stupendously.  But Neighbors does none of these things.  Any character growth happens independently of the main conflict, and since we can’t get behind any of these characters anyway, we can’t really relate to them, and so we don’t care what happens to them, and so we’re not invested. 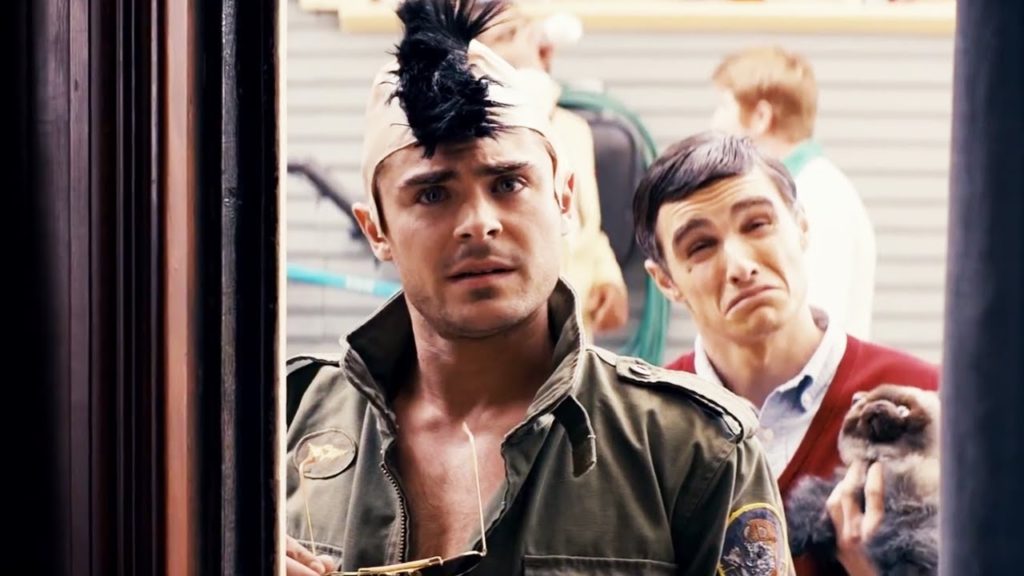 And so now Neighbors has become almost like a feature-length, live-action version of a Family Guy episode (and at least Family Guy features clear protagonists, even if those protagonists are despicable characters).  We can’t laugh with them; we can only laugh at them, and the jokes at everyone’s expense are nothing but mean-spirited schadenfreude—a lazy shortcut for humour that may work in a two-minute sketch, but can’t sustain itself over the course of a feature-length film.  Which brings me to my original point—Neighbors feels much more like a succession of quick sketches than it does an actual movie—each scene is funny enough on its own, but it just dissolves into the next one with little sense of purpose or forward momentum.  When we finally reach the end, we don’t even care which side is victorious over the other.  Either way, it’s a hollow victory that doesn’t feel earned.[2]

This is the biggest issue with Neighbors—like last week’s The Amazing Spider-Man 2, it’s tonally all over the place.  It can’t decide whether it wants to approach the broader comedy of a Ferrell/McKay film, or the more character-based comedy of an Apatow film (sometimes the comedy is so over-the-top you’d be forgiven for thinking that those preeminent hacks Seltzer and Friedberg [Date Movie, Epic Movie, etc.] took a pass at the script[3], and yet Neighbors seems to want these jokes to be in service of a reality-based story in which people Learn Important Things).  It can’t decide who its protagonists and/or antagonists are.  It can’t even decide what subgenre of comedy it is—aside from the aforementioned three genres, it also tries in turns to be a sex comedy, a gross-out comedy, and a stoner comedy.  Again, like the aforementioned Spider-Man film, this is a real throw-everything-at-the-wall-and-see-what-sticks affair.  Unfortunately, when you split all your differences down the middle, attempting to accommodate everything yet committing to nothing, the result is that nearly everything you throw at the wall ends up coated in Teflon.  And when nothing sticks to the wall, nothing sticks to your grey matter, either—I write this review a day after seeing the movie, and already most of it has completely evaporated from my conscious mind.

An immensely skilled filmmaker might—might—be able to make this mess work.  But then again, such a filmmaker would likely not touch this script with a ten-foot pole anyway.  This movie needed a major overhaul in the screenwriting stage.  As is, it’s barely-tangible vapour—of little to no consequence.  It’s the kind of comedy that no one will remember in a few months; the kind of movie that will sell to basic cable for cheap, and so you may one day stop flipping channels to watch until the next commercial break—and then it’s on to something else.  I just hope that the actors involved with this film—all of whom I love and wish to see in much better material—are able to move past what will hopefully amount to little more than a footnote on their resume just as easily.

[1] This certainly wasn’t lost on the marketing team—the tagline on the posters reads “Family vs. Frat.”

[2] To make matters worse, the movie then throws on a superfluous, “four months later” scene at the end that shows the opposing characters inexplicably getting along.  This feels cheap and dishonest, and out of step with the rest of the movie—just another example of this film’s identity crisis—even if one side wins, they all have to be okay at the end because it can’t figure out who the good guys and bad guys are.

[3] One particularly egregious example of the film throwing reality out the window is a character who suffers a severe broken leg (we’re talking bent all the way backwards) in one scene, and in the very next scene is limping along as if he merely twisted his ankle.