A Decent Into The Horrors Of Dependency 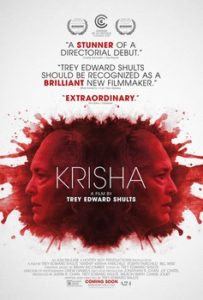 Krisha is tearing up the festival circuit, most recently at South by Southwest (SXSW) with its portrayal of a recovering alcoholic seeking to make amends with her estranged family at a Thanksgiving meal.

Krisha was first a short film written, directed, and edited by Trey Edward Shultz. The feature length film is especially bringing attention to the 65-year old star of the film, Krisha Fairchild. For a film about family, this film is in real life truly about family.  Krisha Fairchild, who had acted in several smaller films, did the film as a favor to her nephew, the director, who plays her estranged son in the film.  The character of Robyn, Krisha’s sister is actually the directors mother who has never acted but is a therapist in her everyday vocation.  Even Robyn and Krisha’s real-life mother is in the film.  Suffering from dementia in real life, everyone in the film has a character with the same name as their real-life identities so that their mother wouldn’t be confused in the scenes she appeared in.  Basically, the entire affair feels like a real family….namely because it is.

The story revolves around Krisha who has been estranged from the family for some time, who arrives, invited by her sister, to Thanksgiving dinner to show everyone that she has been working towards sobriety.  More importantly, Krisha’s chief aim is reconciliation with her son Trey who has been living with Krisha’s sister Robyn and her family for many years. 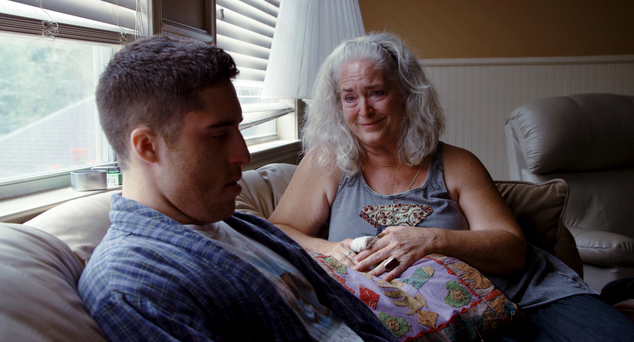 This image released by A24 Films shows director Trey Edward Shults, left, with Krisha Fairchild during the filming of, “Krisha.” Shults made his debut film in nine days with less than $100,000, shooting at his mother’s house and starring his aunt. The resulting film “Krisha” has earned acclaim, been celebrated at festivals from SXSW to Cannes and earned a Spirit Award. (A24 Films via AP)

While there have been many films dealing with dependency and recovery, Krisha makes you feel the struggle throughout the film, and not just watch someone else deal with it.  The anxiety, the tension, the ups and downs and emotional fragility that one might have is powerfully depicted by Krisha Fairchild’s performance.  From the opening shot of an woman so tightly wound with anxiety at wanting to succeed this time around, when she has failed so many times before, to the final crescendo of the family gathering, Krisha Fairchild owns this performance.

Living in Texas, where the film is set, I found the family gathering to be instantly recognizable from the style of the houses, to the way the family watches football and jokes around, and each little nuance felt right at home for me.  While these interactions are comfortable and recognizable, the tension that is building in Krisha’s mind as she is overwhelmed by the unfamiliar loudness that a family gathering brings. This “noise” of relationship upsets the zen-like calm she is striving for, and seeking to medicate with her precise prescription schedule from her doctor, and it causes her to retreat into her room to recenter.  Aiding this unsettling internal struggle is a very unconventional musical score from Brian McOmber. 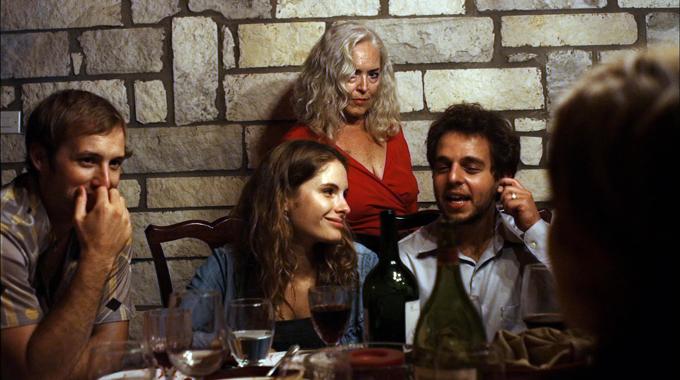 The subtleties of the film are louder than the intentional dialogue in helping to convey the struggle one has when trying to remain committed to sobriety when the urges and voices are so loud in calling you back to give in to the addiction.

From the way Krisha slinks quietly around the house canvasing the cabinets for any hidden items, to the way she interprets everyday discussions and actions by her family, we are made to experience things through her eyes.

Trey Edward Shults’ directorial style is very much in the vein of fellow Texas director Richard Linklater who populates his films with characters that look like real people you would experience in your everyday life, and less like the carefully crafted industry-developed characters that are meant to reflect real life back to the audience but come off as exactly what they are…cheap facsimiles.  Like Linklater, Shults also captures dialogue that reflects the way real people, in a real-life setting would actually converse.  The dialogue between Krisha and her sister’s husband on the back porch is near perfect in capturing the superficial pleasantries to the subtle barbs that slowly unearth the skeletons buried just below the surface. 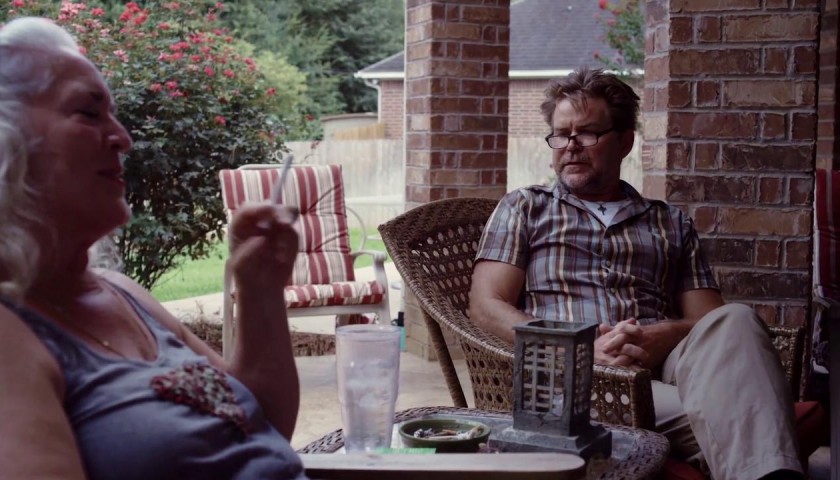 While Krisha is burdened by the desire to succeed at this family gathering and to change the minds of her doubters, the film wisely shows the tension of those who are open to loving Krisha again, but who are still hesitant of opening up their hearts again lest they be hurt if she again lashes out and self destructs.

Krisha is a small film, but it accomplishes big things.  Trey Edwards Schults will be a director to watch moving forward, and Krisha Fairchild has shown with this performance that Hollywood could learn a very important lesson about how valuable it would be to have many more challenging roles for women, especially those over 40, who often are passed over so that the industry can continue to worship at the alter of youth.  Krisha Fairchild doesn’t bring anything more to the table than herself, and her ability to embody this role, and it stands out and shines brightly amongst a sea of similarity that we see in film after film.

Krisha was obviously a labor of love for Trey Edward Shults, Krisha Fairchild, and the rest of their family, as the story is based on the downward spiral of Fairchild’s niece, Nica, who succumbed to her addiction following a similar family gathering to what is depicted here in the film.  The wounds are obviously still fresh for all of the family involved and the result is a powerful film that shows the true pain that is inflicted upon all when one is suffering from addiction.