#52FilmsByWomen: WE NEED TO TALK ABOUT KEVIN 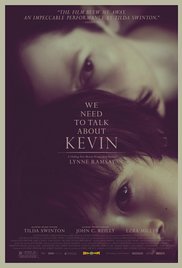 I don’t have the courage to watch every good movie. My friend and fellow Zeke writer, Paul Hibbard, named Amour his favorite movie of 2012, but I still haven’t seen it. My mother was diagnosed with Alzheimer’s a few years before Amour came out, and I just couldn’t deal with the story of an elderly man trying to care for his increasingly helpless wife.

Similarly, when We Need to Talk About Kevin was released – the story of a woman living with the horror of having parented a violent sociopath – I avoided it with extreme prejudice. I have five children and was in the very thick of parenting myself. This was every parent’s worst nightmare. Why would I want to see that?

Well, I’ve watched it now, motivated by this project and my love for Tilda Swinton. And I’m glad I endured it – even though it did feel on some level like endurance, and never like pure enjoyment. Swinton is terrific as Eva, a woman who is never at ease with her son – not even when he’s in the womb. Ezra Miller, so charismatic in The Perks of Being a Wallflower, has a reptilian quality here. He is smart and sly and sinewy. He knows how to inflict the maximum amount of pain on his mother, although the “why” is never addressed. Maybe there is no why. Maybe, to quote another movie, “some men just want to watch the world burn” – and those men were once children.

We Need to Talk About Kevin is directed brilliantly by mumblecore pioneer Lynn Shelton. The movie shifts through time in a way that softens the horror a bit (we are shown early on that something terrible is ahead) – but also makes the story disorienting, surreal, nightmarish. There is also some very potent symbolism. Some critics found it too heavy-handed, but I think it’s just right for what this story. And anyone who has ever experience real parenting guilt – or the fear that such guilt can produce – will recognize themselves in some moment of this movie. I, for one, know exactly what its like to feel intense dislike for a baby who won’t stop crying – and then to feel deep shame and guilt for not liking a baby. We Need to Talk About Kevin may end in every parent’s worst nightmare, but its roots are in every parent’s uncertainty about what they are doing. 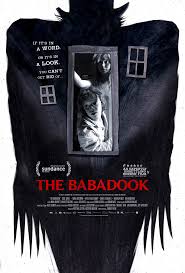 Having written about We Need to Talk About Kevin, I might as well keep it dark today. If you haven’t seen 2014’s The Babadook, do it now. Jennifer Kent wrote and directed this horror-genre meditation on living with grief (literally living with it, as it is the embodied monster that threatens the main character and her young son). Some have suggested that the son – a bright and creative but very anxious and high-need child – is the real monster here. I disagree, but as with We Need to Talk About Kevin, a lot of parents are going to uncomfortably recognize their own experiences in this movie.