Are You Or Have You Ever Been A Party To Condescending Biopics? 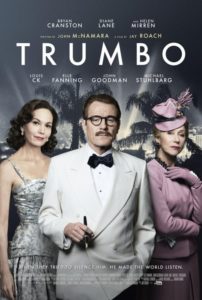 That’s how the late film critic Joe Williams might’ve accurately, yet with tongue in cheek, described Trumbo on his way out of the theater. For Joe, a bleeding heart leftie in his own right, the termwas an inside joke, possibly once leveled at his own writing by one of his St. Louis Post-Dispatchreaders.

In any case, we smile and nod. Trumbo, the sypathetic story of iconic blacklisted screenwriter Dalton Trumbo (The Brave One, Spartacus) in the Cold War, is in fact liberal claptrap. Would anyone expect any less? The blacklist was a plague, a witchhunt, a deadly historic embarassment, and whatever other negative describers anyone would care to apply. A lot of talented people, either communists or guilty-by-association, lost work, jobs, their repuatations, and/or their careers as a result of the bullying tactics taken by the House Un-American Activities Committee. And Hollywood, particularly scarred by it all, naturally wants to make sure we don’t forget it.

The problem is that Trumbo, as directed by Jay Roach (Austin Powers, Game Change) has all the nuance of a Joseph McCarthy senate hearing. The film opens with on-screentext explaining why so many Americans aligned themselves with communism in the 1940s and 50s, and then procedes to hold our hands as it explains and explains and explains itself to us.

It wants to be bold with its steadfast perspective, but in actuality, it’s a cliché-ridden film for high school kids that thinks it’s far smarter than it is.

What it does have is Dalton Trumbo. His wit and words are both legendary. Roach and company have the good fortune of placing those words in the mouth of Brian Cranston, a truly amazing actor who does something special with his leading role in this film. Also of note in the performance department are Elle Fanning as his budding young pinko daughter, and John Goodman playing yet another hilariously blustering film producer, ala Argo, but with a wild streak. It’s Goodman doing what Goodman does best – stealing the show. 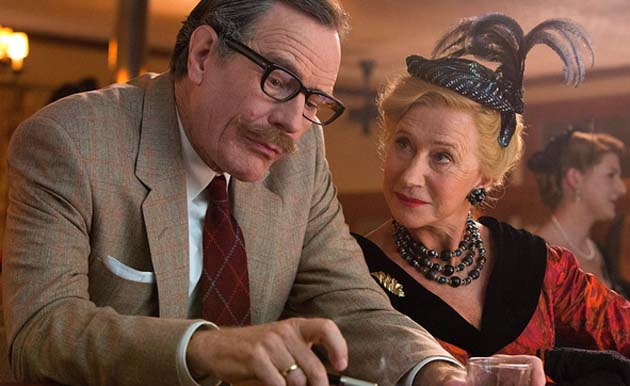 Jay Roach is no stranger to the made-for-cable biopic, and although Trumbo is a theatrical release, aesthetically it’s more in line with such small screen fare as RKO 281or The Late Shift. Both of those self-serious 90s-era historic offerings about show biz, in retrospect, amount to a lot of glossy self-congratuatory messagering, one-sidedness, and actors playing dress-up in bad make-up.

Furthermore, Trumbo goes out of its way to trot out famous faces, some recognizable (David James Elliott as John Wayne, Helen Mirren as Hedda Hopper), some glaringly not (Michael Stuhlbarg as Edward G. Robinson, not even attempting the actor’s famous dialect, or Christian Berkel as the director Otto Preminger who actually has to announce “I’m the director, Otto Preminger!” when he shows up).

There are fine actors who find themselves doing some sort of colorful SNL character, such as Alan Tudyk, affecting a voice as fellow screenwriter Ian McLellan Hunter. And then there‘s Louis C.K. as Arlen Hird, where the actor refreshingly doesn’t even try to be anyone other than himself. The layers of acting styles to be waded through in Trumbo far outnumber the layers of moral complexity presented by the film itself. 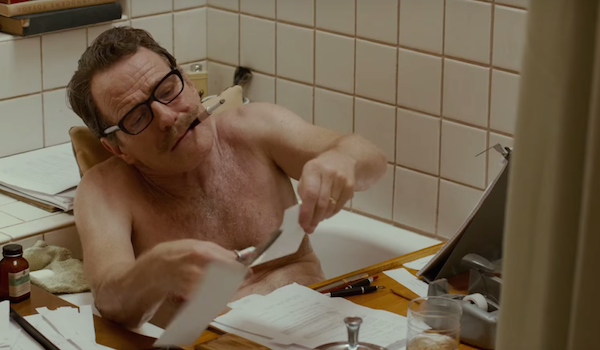 Cranston as Trumbo in his natural habitat – the bathtub.

Cranston though, is nothing short of a saving grace. His Trumbo is almost, almost enough to win one over – if not to communism, then at least to this movie. His timing is perfect, his quality of presence is felt yet charming. When he finally has to play Trumbo in one of his terrible moments (skipping his daughter’s sixteenth birthday celebration to peck away at another screenplay), he’s already got us in the palm of his hand, so we can forgive him and continue on.

Trumbo insists upon spelling out its leftist message with the forcefulness of a convicted blacklistee’s angry keypad strike. (THWAK!) Although it believes itself to be both clever and important, it’s as naked as Dalton Trumbo was himself when he famously wrote movies in his bathtub. This movie has his wit and persona in its favor, and Cranton to graciously handle them. Most of the rest, though, goes right down the drain.

I don’t know what Joe Williams would’ve thought of Trumbo. But if ever the term “liberal claptrap” applied to a film this year, this one is guilty as charged. 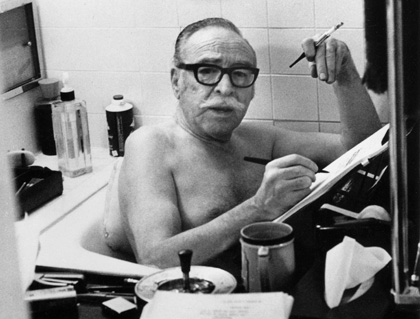