Investigative Journalism at Its Finest! 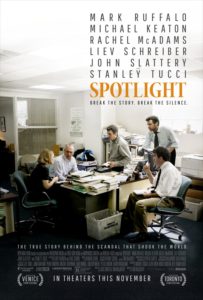 No film enters this year’s potential Oscar race with a stronger cast and heavier subject matter than Spotlight, from director Tom McCarthy (The Cobbler, story/writer of Up and Million Dollar Arm). The film looks at the investigative unit of the Boston Globe, called “spotlight”, and their local story that has had global effects.

The year is 2001, and the Globe is getting a new owner from Miami.  Marty Baron (Leiv Schreiber-X-Men Origins: Wolverine, Salt) is a no-nonsense man who is looking to do what he has done to other newspapers, and that is make cuts.  The fact is that the newspaper business is on the decline, and he has been brought in to save the bottom line.  His staff, who fear he is a bean-counter rather than a newsman, are more worried about keeping their job than looking for stories that will remind people why we need a responsible press. He longs to change that.

Baron has the idea of a story that he has been thinking of and asks for the head of “spotlight” to look into doing something on it.  They will be allowed lots of time to investigate this story, build their case, find collaborative and cooperative sources, and then publish it.  They may only publish it when they have all of the facts, but this is a story that may lead well beyond what they initially think this story involves.  This story is about a number of priests, possibly 13, in the Boston area who have been accused of having committed acts of indecency, usually with children, and how they have been systematically protected by the Catholic church by being shuffled to other parishes instead of facing criminal charges. 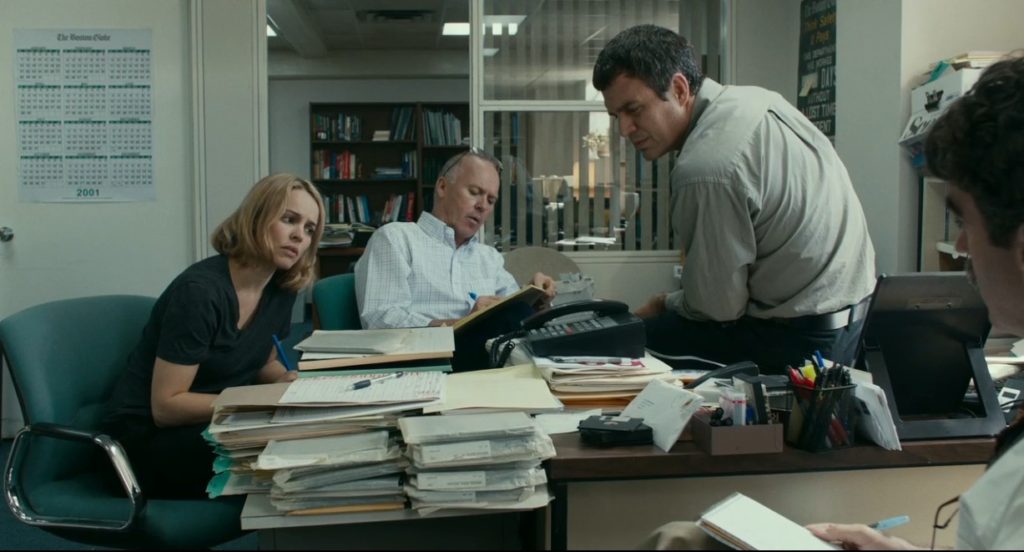 While the film contains some weighty stuff, it moves at a strong speed, and sticks more to the journey of the Spotlight crew as they try to investigate this subject, rather than spending all of the time on the sexual abuse itself.  This is more about the process of trying to get the story right, and the numerous obstacles and roadblocks that are thrown in their way from the lawyers, to the courts, and ultimately from the Catholic church itself. We do see the toll the abuse has had on individuals, including a survivor’s group who has longed for justice but only feels that they’ve been let down when they tried to bring this story to the Globe in the past.  You will feel their pain, but the struggle is primarily with uncovering the truth. 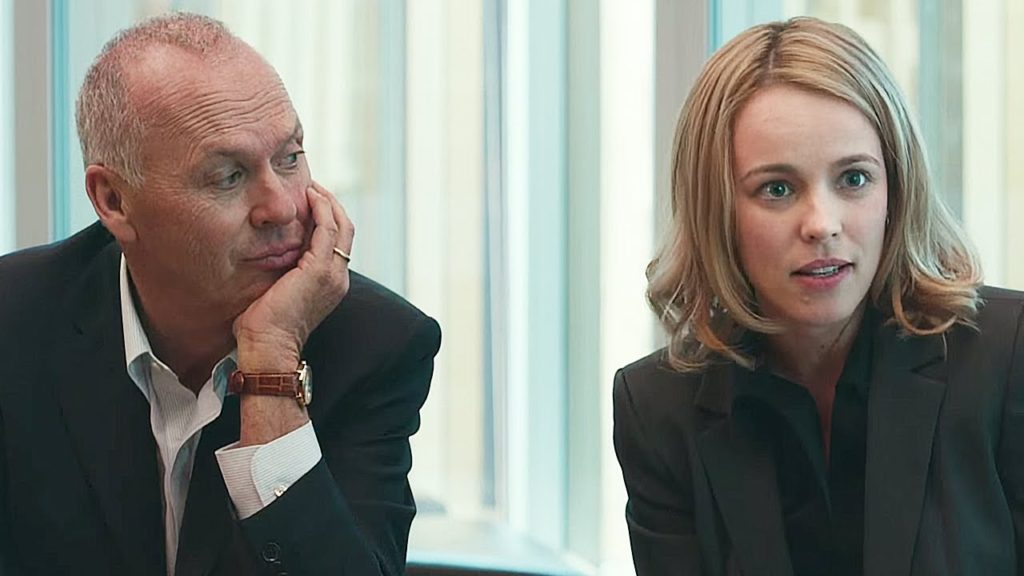 The big question that will come from the audience, especially those who are Catholic, is: does this film bash the faith of the church, or does it simply show a very dark chapter in its history?  This is a hard question to answer as that will be left to those who see it.  I will say that the film deals with this tension, showing how the reporters, who were all part of the Catholic church at some level growing up, have to try to be objective as they start investigating the details.  The institution is being held up to scrutiny, as it should, to see if the structure that is in place fosters a climate that allows this kind of sick practice to happen, and even continue.  And while the structure is questioned, I think the film makes no judgement as to the beliefs of the church or Christians, so as to hold these beliefs up as evidence of how far these alleged acts are from the ideals of the faith.

For me, I believe that a line in the film is one that must be employed here for those with such concerns about the movie possibly engaging in “faith bashing”.  The line from the film mentions that one must separate the faith from the acts of fallen men (very paraphrased).  This ultimately is true.  The acts of man always fall short of the ideal.  Those who are watching the film with a similar faith background, should not feel bashed, but that does not mean that you will not have to wrestle with some things as you watch. 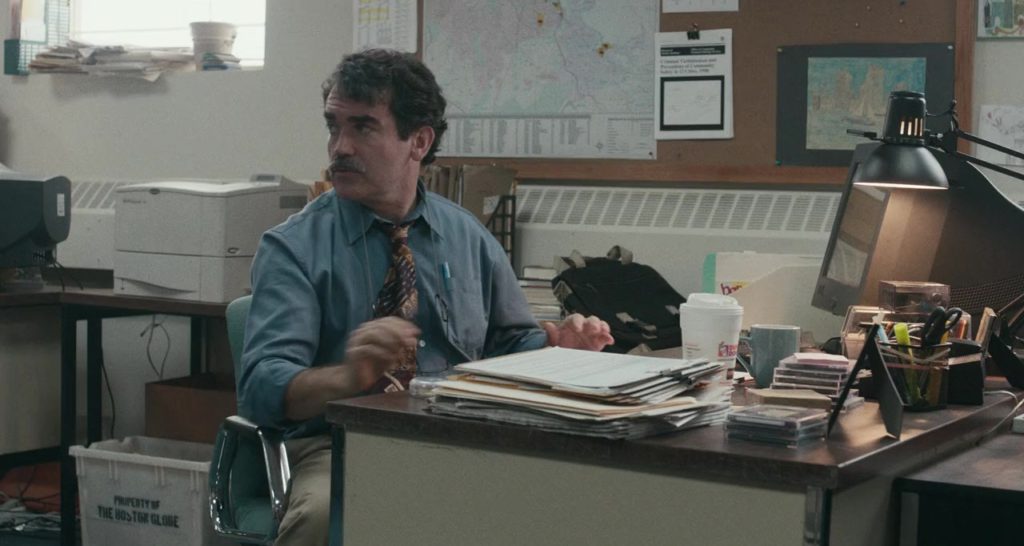 Another thing that struck me about this film is how the momentum of the film is sidetracked by another major event, causing Spotlight to almost shut down the investigation of these priests. That major event was 9/11.  When the focus shifts from 9/11 coverage and back to the other news of the day, Spotlight goes into high gear not only trying to prepare a complete story to report on, but also to keep the other media outlets in the dark about the whole story so that the Globe will have an exclusive.

The film carries ideals of its own.  While newspapers continue to go under, or give up print editions altogether in light of posting news on the internet or an app, this film holds up the ideals of journalism.  The writers and investigators for the Globe may be cynical at times because of what they see as they investigate, but never do they stray from the ideal of bringing the truth to light no matter the cost, and providing the facts free from bias, prejudice, or ideological slant. This is what journalism should be, but the contrast of our present day where newspapers and television news cater more to ratings and the bottom line than they do the pursuit of truth, is on full display.

This is a glaring reflection of the film’s ideals back out to us, the audience, that will not escape the notice of anyone who has been paying attention to their world. Spotlight also doesn’t cover up the toll and strain such diligence to truth has on the lives of those seeking it.  The glimpses of the personal lives of these reporters are not always rosy pictures.  A strong personal life vs. professional success…you can’t ever serve two masters.

This film has certainly been one of the most impactful that I have seen this year, and is one that has continued to challenge me on a personal level.  It is not a flashy film, but it is solid from start to finish.  While the film focuses mostly on the issues in Boston, it does acknowledge the wider impact on the world itself, and the impact it has had on the Catholic church.

The real-life story, that this film documents, eventually ran in the Boston Globe in the year 2002.  Since then, three Popes have had to continue to address it, as it is the story that simply won’t go away.  This film will make sure that this continues to be the case.  And so, through the diligence of strong research, journalistic integrity, and the search for truth, Spotlight shows that these ideals can be realized….if only we would embrace it and not turn a blind eye.