Will This Franchise Finally Launch the New Age of the Modern Day Female Heroine Archetype? 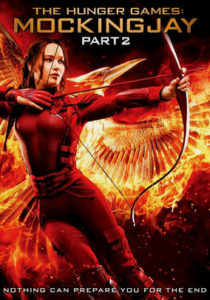 With Mockingjay Part 2, the popular teen dystopian-film series comes to a fitting close allowing star Jennifer Lawrence a chance to be released from a franchise that has occupied over 5 years of her time.  With its ending, the question is whether having a strong female heroine that has been immensely successful will carry over into other franchises of our time, specifically the ever expanding comic-book universe which has been slow to cast a female franchise lead.  Ms. Lawrence has certainly been a part of that universe as well with her role as Mystique in  the newer X-Men films, but with that being more of an ensemble part, Hunger Games is really the truer test of whether we truly move forward or not on this issue or not.

Mockingjay Part 2, is at least a more entertaining film to watch than the slower set-up film of Mockingjay Part 1.  The film starts off exactly where Part 1 ended.  Those who do not remember the specific details at the end of Part 1 will have to remember immediately to make sense of where we find Katniss Everdeen at the beginning of this final chapter.

The film wraps things up quite nicely for the narrative threads that have been weaving in and out of The Hunger Games, Catching Fire, Mockingjay Part 1, and now Mockingjay Part 2.  The typical teen romance love-triangle between Katniss and her long-time hunting buddy Gale (Liam Hemsworth) who was sworn to look after her family when she went to the first Hunger Games, and Peeta (Josh Hutcherson), the baker’s son who has always loved her from afar, is finally resolved and in a way that feels natural to the events of the story. 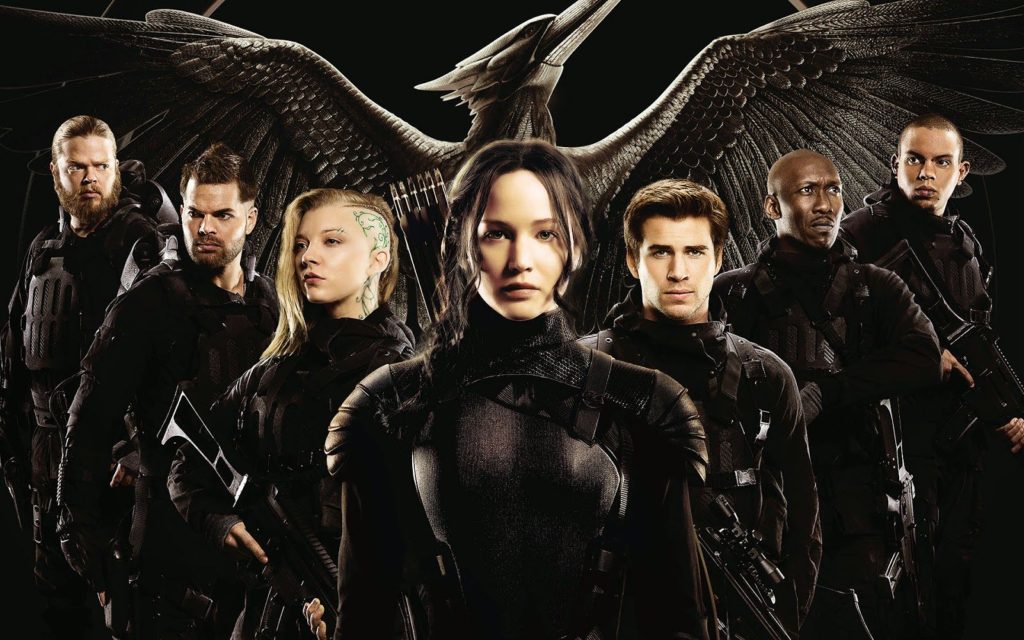 Peeta’s brainwashing by President Snow in Mockingjay Part 1, and subsequent desire to “kill Katniss” (a lethal intended purpose of the brainwashing) notwithstanding, the film, by the end, has worked it all out.  We especially see the showdown between President Snow (Donald Sutherland), Katniss, and the district 13 rebels consisting of President Coin (Julianne Moore), Plutarch (Phillip Seymour Hoffman), Beetee (Jeffrey Wright), Effie (Elizabeth Banks), and Haymitch (Woody Harrelson).

If there is a knock on this film, and the series as a whole, it is that its pacing and feel have been very uneven, despite Francis Lawrence being at the helm for all but the first installment.  After Gary Ross directed the first film, The Hunger Games, Francis Lawrence came in and gave us the strongest entry in the series, Catching Fire.  The decision to split the final book into two movie installments is a decision that makes financial sense for Lionsgate as they can milk this franchise for even more money via the template established by Harry Potter and the Deathly Hallows.

From a story-telling sense, however, it may be the cog that has slowed the momentum of Catching Fire to a halt, resulting in a slow fading away of what should have been a powerful conclusion.  So much set-up time was spent in Mockingjay Part 1 that this final installment feels rushed at times, and fan-favorite characters are given very little screen time, interaction, or final bows.  Haymitch, Effie, Beetee, and television host extraordinaire Caesar Flickerman (Stanley Tucci) have very little to do here except be seen for continuity’s sake. 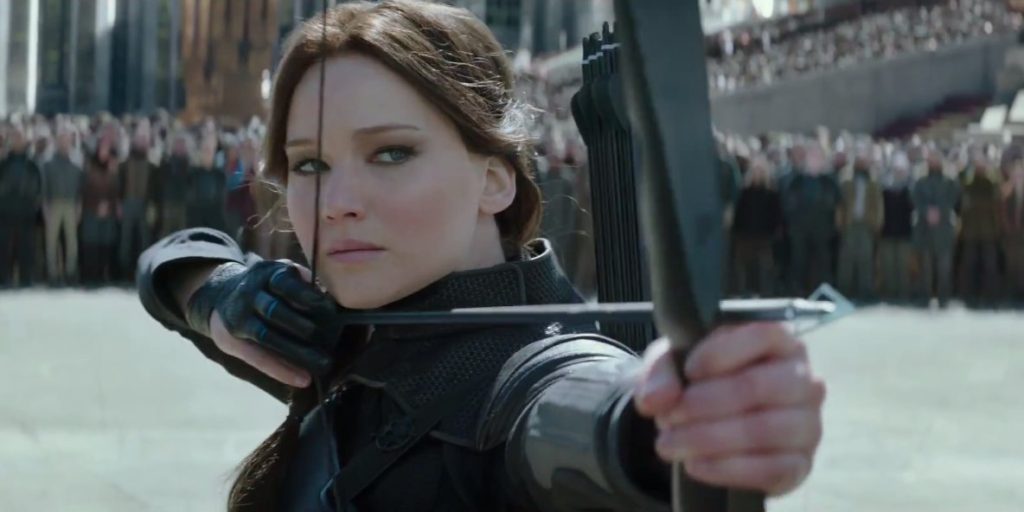 The most notable absence is that of the late-Phillip Seymour Hoffman who has his final on-screen appearance here.  While he only missed the final 8 days of shooting with his death, his absence is glaringly obvious in several key scenes, especially a final scene that was supposed to happen with Katniss,  where his character Plutarch tells us the reason she was chosen to be the symbol of the resistance, harkening back to why she was plucked from the arena in Catching Fire.  Instead, we get his final statements in a letter written to Katniss, as read by Haymitch.

Despite some of these knocks, this series is miles above the other teenage-dystopian films being produced right now, especially Divergent, and to a lesser extent, The Maze Runner series.  Jennifer Lawrence, who already had acting bonafides through her Oscar nominated performance in Winter’s Bone, became a star through these films, finding time to be a part of this and the X-Men franchise, while still pursuing strong side projects with her Oscar winning performance in David O. Russell’s Silver Linings Playbook and with American Hustle. 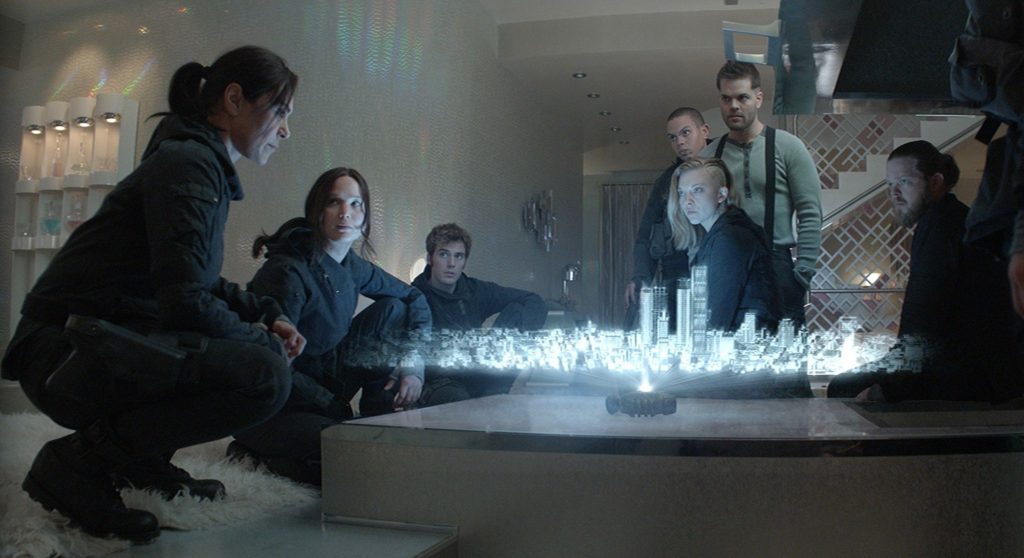 Lawrence’s presence in this series has been the glue that has held the series together in spite of its already mentioned flaws.  Here, she gives it all she has in her final performance as the girl on fire, packing lots of emotional punch in a few key scenes at the end that wrap up the arc that begin when she first volunteered as a tribute to take her sister’s spot in The Hunger Games that I will not spoil here for those who haven’t read the books.

So as this series draws to a close, its final installment, Mockingjay Part 2 rises above its predecessor, but not nearly as high as Catching Fire or the promise that Catching Fire seemed to offer us.  It has also set a higher standard for teen fiction film adaptations that previous franchises have fallen short of (I’m looking at you Twilight, Vampire Academy, The Mortal Instruments, The Giver, and Divergent). It has also finally given us a female heroine that is as rich, layered, complex and vibrant as any of her male counterparts.  A reluctant hero, with a sense of right and wrong, whose emotions can get in the way of the best laid plans and intentions felt refreshingly relatable, even if the world she embodies looks nothing like ours on the surface.  As this film series draws to a close, my hope is that other series wishing to copy its success won’t simply do it by emulating the themes, look, and style of this series, but will see how character development, and strong female and minority roles in particular, will open even more possibilities to reflect a culture as diverse and rich as the 13 districts and the capitol of Panem.