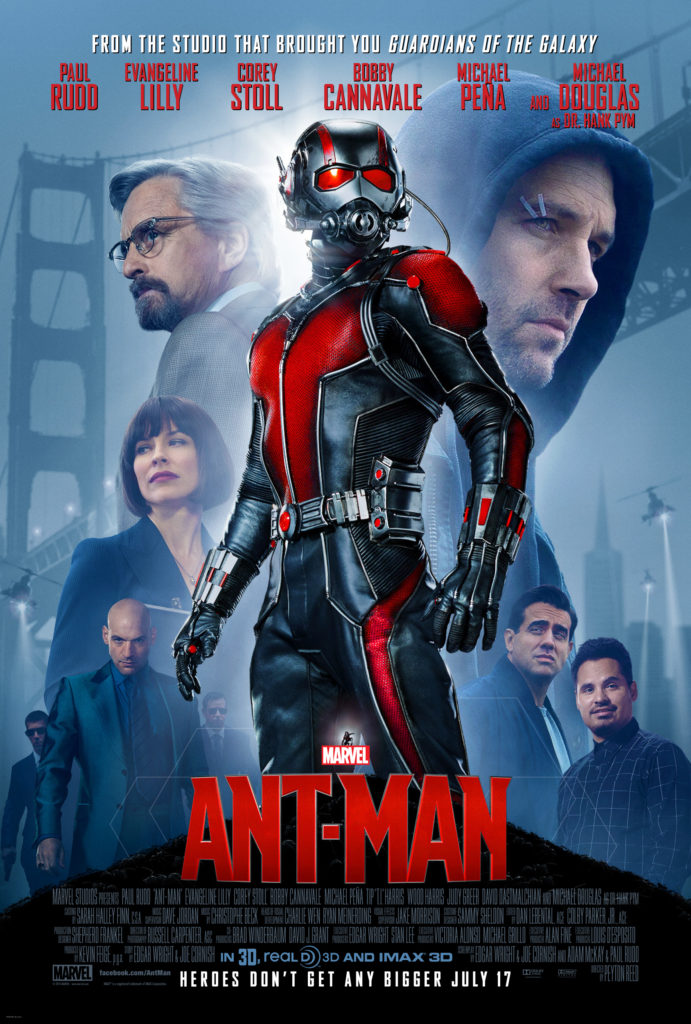 The tall and short of Ant-Man is that he’ll always be the little guy. Although the shrinking character himself dates back to the earliest days of Marvel Comics, and who, along with his wife fashionista Janet van Dyne, the similarly powered Wasp, is a founding Avenger, the general public nonetheless don’t know who he is, and remain all too ready to dismiss him.

As an adaptation, only the names and powers remain. Edgar Wright and Joe Cornish’s screenplay takes many a liberty with the characters and chronology, but hey, it’s all in good fun. The changes work to shore up this new telling, and include a key element that Ant-Man has a secret past, once upon a time saving the world as a covert operative. Indeed, Ant-Man is new (to the movies), but we’re told he’s always been there. (At least in a previous incarnation).

Peyton Reed, the skilled director who gave us the fun and functional films Bring It On and Down With Love, has the unenviable task of replacing the sorely departed Wright as director. What we’ve lost in terms of Wright’s singular genius we’ve acquired in the way of apparent heightened Marvel Cinematic Universe connectivity. Which is always fun, and works for the movie we’re left with. 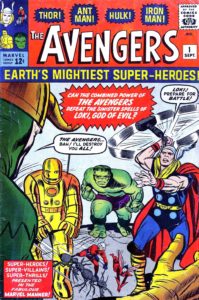 While viewers will unquestionably know that Ant-Man exists in the same world as The Avengers, the film thankfully isn’t burdened with the distracting degree of groundwork-laying for future Marvel movies that the recent Age of Ultron was plagued with. The cameos and name-drops are considerably more organic to the film we came to see as opposed to continuously priming the pump for next time. An understandable criticism of the MCU (Marvel Cinematic Universe, as opposed to the comics universe, or cartoon universe, or refrigerator magnet universe) is that the films are always priming the pump for next time rather than concentrating on the film at hand. While this observation carries some weight, it must always be remembered that these are based on monthly comic books, a medium kept alive through foreshadowing and forever planting story seeds.

Paul Rudd stars as Scott Lang, a tech criminal, thief, and loving father who’s stint in prison was brought about through the most noble of Robin Hood intentions. Rudd is funny enough in the role, even as its clear he’s no heir to the Robert Downey Jr. position within Marvel. Rudd carries the film valiantly, and wears the suit well. But at the end of the day, Rudd remains a talented Judd Apatow-esque movie star. Whereas his costar, Michael Douglas, is a Movie Star. Douglas’ presence as one-time Ant-Man Hank Pym, who connivingly recruits Lang into taking up the identity, is downright commanding. 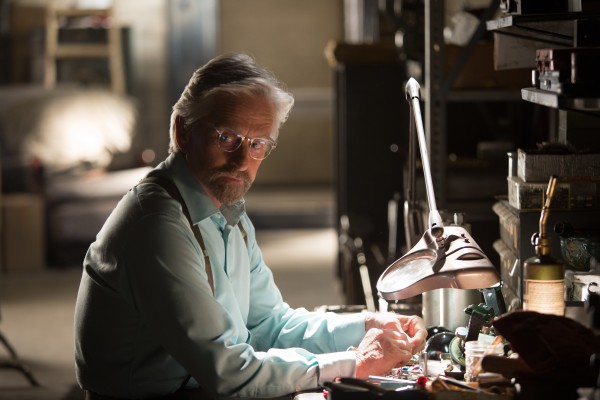 The one-time Gordon Gecko looks up from his work.

Less commanding is Evangine Lilly as Pym’s daughter, Hope van Dyne. Wearing a school marm bob, a black pantsuit and a tired scowl, Lilly’s world-weary demeanor alarmingly goes beyond her character’s own resentment of her father, who’s not only suppressed his own long-ago Ant-Man history, but the fate of Hope’s mother, as well. Lilly fails to excite as Hope, which is problematic. This is especially disappointing considering how elevating she’d been on Lost and as the elf Tauriel in The Hobbit films.

In the comics, Hank Pym never could settle on a secret identity or super power. Over the years, he’s fought evil as Ant-Man, Giant Man, Yellowjacket, the Wasp (in honor of his wife), and even simply as Dr. Hank Pym. He is one of Marvel’s foremost men of science, but is haunted by his volatile temper. This makes Michael Douglas, a smart actor with no shortage of broil, perfect for the part. But for the movie, the identity of Yellowjacket goes to the villain, a copycat corporate glory-hound (a deliciously evil Corey Stoll) not unlike Jeff Bridges’ Obadiah Stane in Iron Man. The eventual showdown between shrunken warriors is good one, said to be all the better in 3D. (Alas, the 3D version of Ant-Man did not screen for my town.) 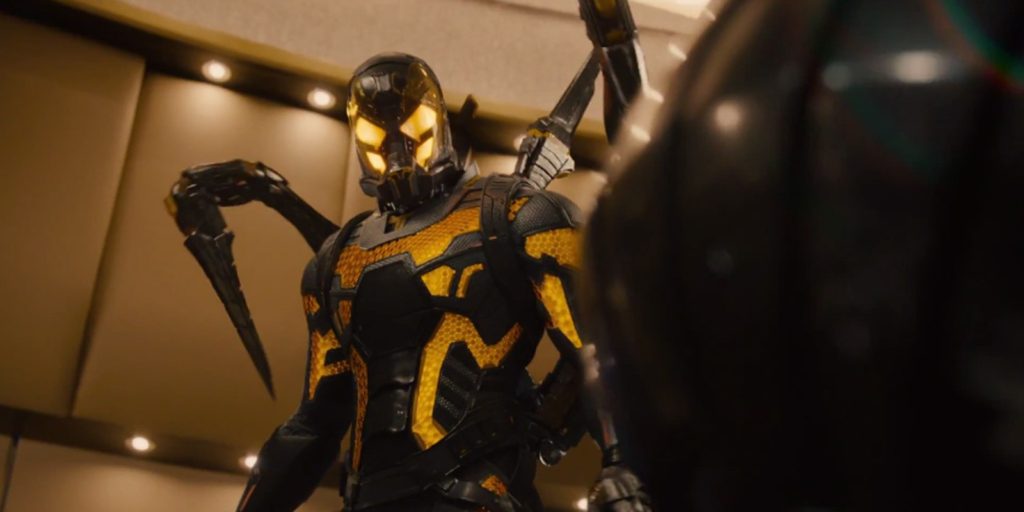 There’s a gleeful implausibility to all of it, even by Marvel movie standards. There are moments that land as perhaps some of the most wonderfully absurd yet. And, in a shared universe that’s already given us Rocket Raccoon, The Vision, and the kingdom of Asgard, that’s saying something. But, Ant-Man moves along at a zippy pace and always has fun, making it an apt summer film. It’s tighter, more focused, and more satisfying than Age of Ultron. (Although weirdly, Ant-Man validates that film, bearing it out as essential MCU text, despite its baggage and shortcomings.)

Not only does it turn out that Ant-Man the character predates the Marvel Studios slate of films, the movie’s very development dates to pre-Iron Man days. And although fans of Edgar Wright may take issue with the final result, not to mention the very fact that Marvel went forward with him period, there are reasons not to dismiss Ant-Man. Although it’s been established heretofore that Marvel Studios does not make flops, this film has nevertheless managed to acquire a bit of a pre-release also-ran stink. Paul Rudd made the film the butt of jokes during his final appearance on Late Show with David Letterman, and even Marvel itself has seemingly shuffled it around, dumping it unceremoniously at the tail end of its “phase two” arc of films. Yes, the plot is standard issue Marvel movie gobbledygook (get the Important Glowing Blue Thing; clobber the bad guy!, demostrate universal emotional traits, etc.) and certain tangents are both simultaneously overhyped and undercooked. And, Lang’s annoying criminal buddies of certain ethnic backgrounds are a plausible target for racial-issues finger pointers.

But, are Edgar Wright’s fingerprints still on this? Yes they are. Is Peyton Reed worth dismissing? No, he’s not. We’ll never see the Edgar Wright Ant-Man, although goodness knows it wouldn’ve been a blast. But Reed’s version is more than adequate as the newest Marvel film – snappy, exciting, and colorful.

Scott Lang might just be the MCU hero for anyone who’s ever felt shut out, small, and less than he or she ought to be. For the well-intentioned screw-up, Ant-Man is a little guy to look up to.

He shows us that even things are at their worst for him, there’s still a benevolent rich genius who’s been watching from afar, just waiting to grant your chance as a super hero.

Be careful where you step next time to you go to the movies – it might just be an ant, man. 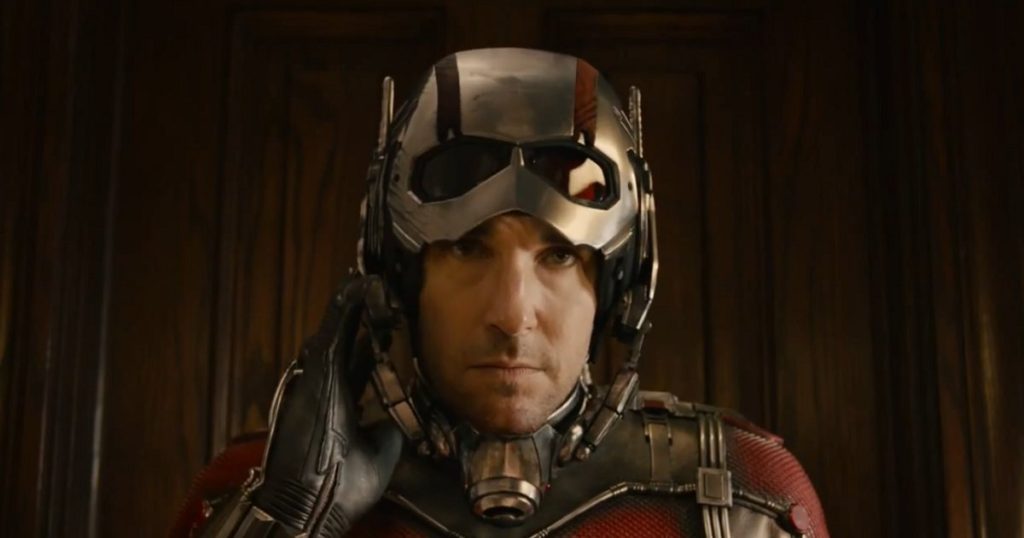