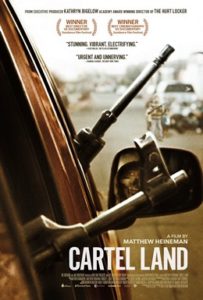 Cartel Land is filmed, produced, and directed by Matthew Heineman that takes a look at the fight against the Mexican drug cartels from both the United States and Mexican perspectives.  The film is bookended by an interview with some hooded meth “cooks” in Mexico lamenting the fact that they know they do harm by being a part of the drug trade into the United States, but quickly dismiss their complicitness due to having come from poverty.

The journey of this documentary then begins from the perspective of a vigilante group here in the United States called the Arizona Border Recon led by Tim “Nailer” Foley.  Tim is a veteran who now leads this group who patrol an area in Arizona known for its connection to the drug and trafficking trades.  Tim’s story is one of overcoming substance abuse and trying to do something worthwhile now that he has been clean for 18 years.

In what started as a means to right an injustice of never finding construction work due to the “illegals” who are getting paid under the table and stealing his jobs, he has over time shifted his focus to what he calls the true enemy: the Mexican drug cartels themselves who are creating the conditions he was affected by.

Many have come to join this group, with many bringing their own agendas for why they are helping him.  Some of these agendas will reinforce the negative stereotypes of vigilante groups such as this, of being racist, especially towards the hispanic population.  Tim seems to have a more centrist approach, yet he also fails to condemn the more extreme views of those who have joined him.

Heineman then shifts the focus to the area in Mexico called Michoacán, where the Knights Templar Cartel is in control of many towns, as well as the avocado and lime business.  Cartel Land shows footage of some of the more horrific acts of this cartel against the people, beginning with the slaughter of 15 individuals (13 were from the same family) who worked on the lime farms.  This slaughter included small children, teenagers, as well as many adults.

Arising from the hopelessness of the people in this region who have found no relief from the Mexican government is one Dr. José Manuel Mireles who decided to take back his town by taking up arms against the cartel.  Founding Autodefensas, a Mexican-based vigilante group, he becomes the spokesman for a movement that is slowly taking back the various towns in the Michoacán state. 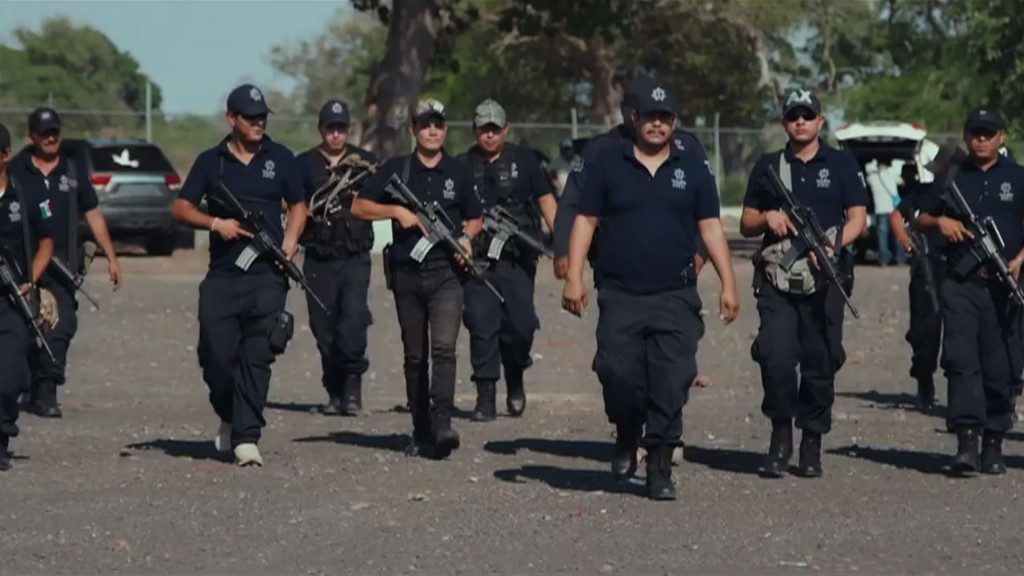 Like Foley’s Arizona Border Recon group, Mireles finds that his movement, while doing much good, begins to bring in people with their own agendas.  Dr. Mireles, also has made himself a target, in addition to trying to keep the movement he founded from being as corrupt as the cartels they are trying to fight.

This story is a fascinating one because it is able to get past the rhetoric of the politicians and institutions that are part of the problem to see the true effect this is having, primarily on the Mexican people themselves.  The documentary shows what the politicians say, but shows such speeches in a way so as to give us the same effect when we see them being given as the Mexican people themselves who pay such rhetoric no real attention.

And even though these two groups might be seen as “extremes”, they actually provide a sharp clarity with which one might look at these complex issues of everything from the drug trade, personal safety and security, border patrol, trafficking, and corrupt politics without being lost in the policy aspect of this issue.

Kathryn Bigelow, the director for such acclaimed films as Zero Dark Thirty, and The Hurt Locker, serves as an executive producer, but mainly as a means to help Heineman get this film some support.  And while she too has cast the gaze of her camera on the moral ambiguity that lies in other complex issues relating primarily to war, here Matthew Heineman is in complete charge of the film.  This is clearly his movie from start to finish.

The film closes with footage from the same conversation as was being had in the beginning of the film, only here the politics, corruption, and ambiguity that is happening in Mexico comes front and center leaving the audience with only the helpless feeling that nothing is probably going to be able to be done about the problem anyway.  The border is now “Cartel Land“.