Documentary Delivers The Talent And Tragedy of Amy Winehouse 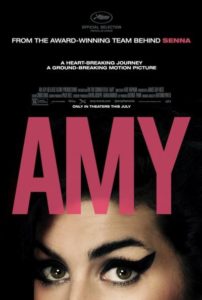 The tragic, sad death of vocal marvel Amy Winehouse rocked the music world in 2011, a loss as deeply felt for many as it was inevitable. Lots of singers have talent, but Winehouse’s talent was something different, something belting from another plane. As many have pointed out, her age of passing garnered her a slot in the “27 club”, alongside of Janis Joplin, Jimi Hendrix, Kurt Cobain, and others who departed too soon via unatural causes. Winehouse, though, was no rocker. She was a simply a jazz and blues singer who made it so big, and it having been a while since that last happened, “rock star” was the only category anyone knew to put her into.

But I missed it all. Somehow, through the entire meteoric rise and moment of Amy Winehouse as a phenomenon, I was too busy having kids and living life to ever tune into her. She was familiar only due to the ubiquitous name logo (resembling something from the 1970’s glam rock scene), and late night talk show jokes about her drug problems. (I think I actually saw Jay Leno tell the terrible joke about her that appears in the film.) So for me, there is no personal connection, history, fandom, or even familiarity. With me, the documentary of her life must start at zero: Who is Amy Winehouse, and why is it important to know what happened to her?

Director Asif Kapadia gathered a lot of acclaim with his previous documentary about a fallen public figure, Senna (2010). Senna continues to be venerated, and advance buzz on Amy has it roaring up on it in terms of very positive word of mouth. But maybe “positive” isn’t quite the right word. Amy, like Senna, is a tragic slow-burn biopic that is expertly assembled from scads of grainy old videos and vintage TV appearances.

Some critics  are claiming “Amy” to be an introspective documentary milestone, a chronicle of a public downward spiral laid bare. But as I found myself slightly contrarian to the tidal wave of accolades “Senna” attracted, I also have to be that guy when it comes to “Amy”.

The film is fine, if a little long. (128 minutes.) As it introduces one leechlike hanger-on after another, threading the narrative together with voice interviews heard over all manner of old videotape footage, there’s something quite detached about it all. Never does she seem to have a pure and right influence in her life (her greatest lover is another junkie, and her own father only ever shamelessly exploits her fame.) Yet, beyond her eventual persona of the beehive do and naked lady tattoos, Winehouse is portrayed as a talent more than a relatable human being – which isn’t to say her very flawed humanity isn’t at the forefront at all times. Here we are shown that she was just a girl; one who could sing very, very well.

Amy is a noteworthy film, although from an emotional standpoint, it’s hard to know what to do with it. I didn’t find myself wanting to seek out Amy Winehouse’s back catalog, or hungry to know even more about her. For a novice like myself, Kapadia’s aloof downer of a film is all the Amy I may ever need.