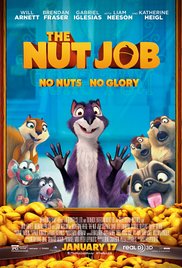 After a prolonged season of amused-with-themselves animated studio films that are over-complicated for their little tyke target audiences (time traveling presidentally pardoned turkeys and fuel-injected race car snails), the premise of a cadre of hungry squirrels plotting to knock over a nut shop sounded refreshingly straight-forward.

Silly me, perish the thought!

Not to persecute The Nut Job for simply not being what it isn’t, but honestly, what a missed opportunity for a better film! This really could’ve been a staid and clever talking animal heist picture, one that operates the same way all good heist pictures operate. That is, the narrative intensely focusing upon A.) the characters’ blind yet somehow admirable obsession with the object of the theft, and B.) the time spent on the details of the plan: The blueprints, the layout, the scoping-out, the knowledge of any security lapses, what security must be overcome, and finally, the escape plan. In the context of a modern talking animal comedy, all of that handled properly are things even a three year old could process. In a better world, this could’ve been The Nut Job. A screwball whack-a-doodle version may’ve been great, Take the Money and Run with squirrels. Even a comedy version of Rififi would’ve been quite preferable. (Actually, the comedic Rififi is pretty much Topkapi – also made by Jules Dassin, a decade later. There’s still room for improvement.) 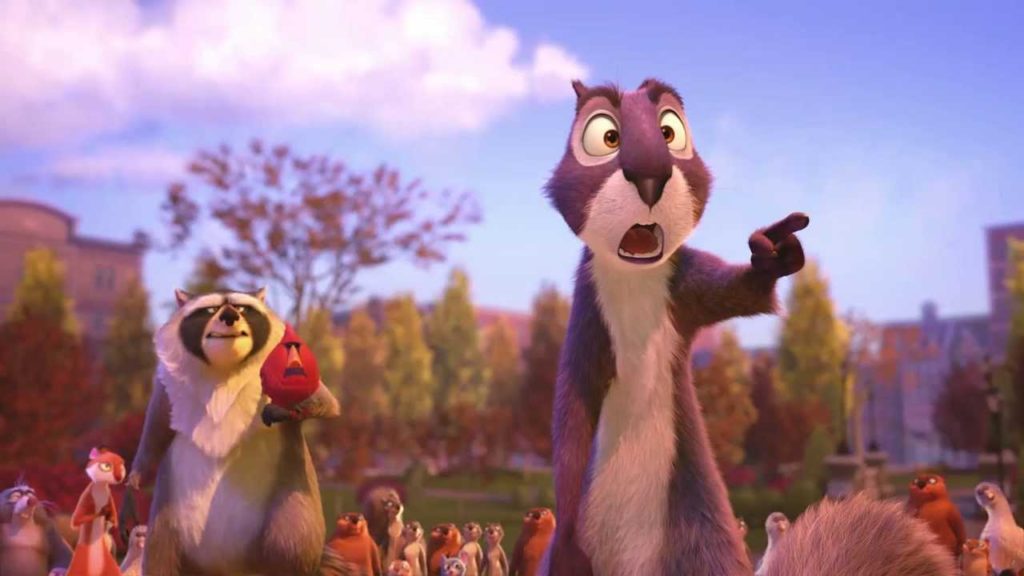 Instead, that possibility is blown as The Nut Job is another way too overcooked-by-committee exercise in A.D.D. filmmaking – all chop, snark, attitude, and unwanted plot complexities. It’s all but official – these sorts of films clearly spend too much time in development, with too many people interjecting ideas, be they good, bad, or pandering. It’s obvious that once upon a time, way back in the long forgotten laired-upon phases one and/or two of its creative development, The Nut Job was intended to have charm. After all, the world of the film is a curious early 1950s setting (the time of Jules Dassin’s heist classics), with design aspects peppered everywhere that are literally nutty. (Acorn shaped post toppers lining a park, for instance. As it should be here, as this world is really about nuts.) But this entire avenue is superfluous, even forsaken as a production designer’s indulgence and nothing more.

A few 1950s throwback flourishes (some era-appropriate songs, some period dialogue stylizing, and oh, maybe an overall attitude to match its setting) would’ve at least distinguished if not elevated The Nut Job from the fuzzy plethora of other CG talking animal comedies out there. Instead, the filmmakers settle for obnoxious one-liners, a generic look to the characters, and dull-thumping techno music. What should be clear blind obsession with stealing those nuts degenerates into a murky social message about greed and corruption. The time that should be spent detailing the minutia of the heist is instead a ninety second montage of unfunny gags. 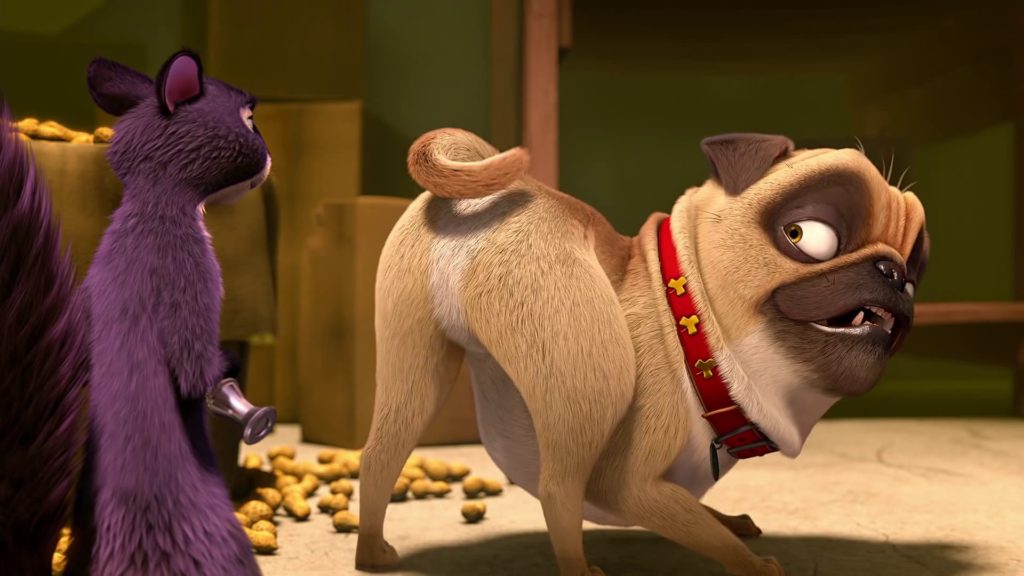 THE NUT JOB: As funny as a dog’s butt.

This being produced by lesser-knowns Gulfstream Pictures and ToonBox Entertainment, no one would expect the quality of the animation to be in league with Pixar, DreamWorks, or even Blue Sky. But in a case like this, any bit of increased aesthetic quality would’ve at least made the whole thing a shred more palatable. Just when you think it can’t get any worse, the closing credits hit with an animated likeness of the “Gangnam Style” guy dancing with the critters over his internet sensation from two years ago. I don’t think they even bothered to change it from a horse dance to a squirrel dance, which at least would’ve made a lick of sense.

All CGI family films have a heap-load of celebrity voices, and The Nut Job is no exception. And, in the spirit of the early star-fueled DreamWorks efforts such as Shrek and The Road to El Dorado, the girth of recognizable name actors whom lack proper voice over talent not only weaken certain characters, but strike a blow at the entire venerable voice over talent pool who get overlooked. Why hire an unknown dynamic vocal professional who could assure that her character will ring as true as possible when bland Katherine Heigl will do it for more money, and her name looks good on the poster? (To whom, I’m not sure. But that does seem to be the prevailing wisdom.) Also among the all-star pile-up are Brendan Fraser, Maya Rudolph, Stephen Lang, Liam Neeson, and Will Arnett in the lead. (Arnett should be counting his lucky stars for his part in The Lego Movie, which appears to have a shot at actually being decent. Neeson, on the other hand, occupies a part that seems to have been inflated once they signed him. Because apparently these filmmakers never saw Battleship, which confirms that you can in fact hire Liam Neeson and then only use him in five scenes.)

I don’t want to be the guy who types that you’d have to be nuts to like this movie. But if you’re over the age of ten and enjoy it, then yeah, it’s time to take a long look at yourself, and ask whether you’re salted or not. The Nut Job is the rare film that makes the animated box office turkeys of late actually look more appetizing.