Simply Let This One ‘Rest in Peace’ 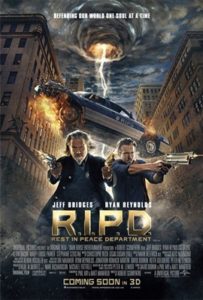 R.I.P.D. started out D.O.A. with a year long delay in its release date.  Originally, it was supposed to have been released in the summer of 2012.  The release was pushed back so that it could be converted into 3D.  Sadly, the 3D is pointless for this film, and so the real concern should be with the movie itself.

Ryan Reynolds, who stars in this film, finds himself in a real bind.  He was starting to move away from his early Van Wilder image into more leading man roles.  With The Proposal he was a competent romantic lead alongside Sandra Bullock, and in Safe House, he proved his action bona fides next to Denzel Washington.  But it all began to come crashing down with his sub-par film, The Green Lantern.  I personally liked him in the role, though the film itself was a complete letdown.  This week he has both Turbo, where he voices the title character, and R.I.P.D. debuting.  Both films are tracking way lower than what they need financially, in order for them to be deemed a success.  I wish R.I.P.D. was the film to get him back on track, but I think it may just continue the derailment in progress of his career.

The premise of the film is that Reynolds is a Boston-city cop named Nick, who is killed in the line of duty.  He finds himself whisked away to the afterlife where he is offered the chance to delay Judgement Day by working for the Rest In Peace Department, or R.I.P.D.  Their job is to go back to earth and try to find “Dead-O’s”, who are dead people who have escaped their afterlife holding cells and who are potentially endangering Earth itself by their very presence.  Nick is partnered with veteran R.I.P.D. officer, Roy, played by Jeff Bridges.

Jeff Bridges is the real star of this film, as Reynolds is regulated to playing the straight-laced side kick. Bridges seems to be missing his Rooster Cogburn voice from True Grit, as he plays an 1800’s era gunslinger, sans the eye patch.  Also appearing is Kevin Bacon, who plays Hayes, Nick’s Boston Police partner, and Mary Louise-Parker, who will be competing against this film with another film you might have heard of, called Red 2.

R.I.P.D. is a short film by most summer blockbuster standards, clocking in at just 96 minutes.  Even with a short run time, it feels longer than it really is.  Directed by Robert Schwentke (Red, Flight Plan, The Time Travelers Wife), the film is straight-forward enough, but it lacks an emotional center to even cause you to want to be interested.  It’s as dead as the premise (Pun intended).

I feel like I should just call this what it is.  It’s a film that takes the basic premise of Men In Black and substitutes aliens for dead people.  There is the agency who seeks to keep the dead’s presence among us a secret, and there is also the typical diabolical plan that must be thwarted.

As if recasting Will Smith for Ryan Reynolds, and Tommy Lee Jones for Jeff Bridges wasn’t enough, R.I.P.D. also seeks to borrow basic plot ideas from Ghostbusters.  For comedy relief, the film  employs a “Dead-O” character, named Pulasky. Pulasky is really just a fat, Elvis-looking man whose transition makes it seem he is impersonating Fat Bastard from the Austin Powers trilogy.

Most of the jokes in the film are at the expense of the two “avatars” that the real, living people see when they are looking at both Roy and Nick.  Since Roy and Nick are dead, they assume visible identities that are quite different looking than who they were when alive.  Nick is seen by the living as an old Chinese man, while Roy is a blond bombshell.  Typical sexist jokes, wolf-howls, and catcalls ensue on screen whenever Roy walks into a room.  The rest of the jokes originate through Roy, who still utilizes his best 1800’s cowboy vernacular in the modern world.  You might smile at one or two of his quips, but that is about it. Despite these best attempts at humor, again, this film just simply feels dead on arrival.

Fast and Furious 6 was taken to task a little bit, earlier in the summer, for having the longest runway in the world as a set piece for one of its big action scenes.  While it was silly, the action itself worked because you liked the characters and were invested in their plight.  In R.I.P.D., look for the world’s largest parking garage, in the final action scene at the climax of this film.  The only difference here is that you won’t care, and you’ll actually be trying to remember where you parked so you can leave the theater a bit more quickly.

Given R.I.P.D.‘s delayed release, and the fact that they only had screenings the night before it is unleashed upon the unsuspecting public, you know that the studio is already bracing for burying (another pun) this film quickly, and trying to recover with their next release.  R.I.P.D. is looking to be the latest blockbuster summer film to be buried early (I can do these all day).

If you are going out to the movies this weekend, you might want to pick something else, and simply let this one rest in peace.