In anticipation for director/writer/former Predator star Shane Black’s The Predator, I’ve dug up and am now sharing my 2010 opening day review of Nimrod Antal’s 2010 attempt at franchise revival, Predators.  Looking back, I seem to have enjoyed this film far more than I now recall. Huh. 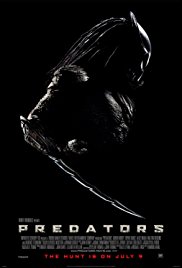 After doing near-permanent damage to their under-utilized sci-fi/thriller franchise Predator with a couple of horrid films pairing the blood-thirsty cosmic hunters against the even-more-popular creatures of the Alien franchise, 20thCentury Fox finally, after many years, has seen fit to give the Predators the solo spotlight once again. (The original crowd-pleasing Predator, starring Arnold Schwarzenegger, hit screens in the summer of 1987. It’s only direct sequel, Predator 2 with Danny Glover, came out in 1990. Since then, there have been two Alien vs. Predator films that are best forgotten.)

Making this new Predator film even more appealing to fanboys is the fact that Fox has entrusted its creative development to Robert Rodriguez and his Troublemaker Studios. In reality, while Rodriguez’ stamp would have to be a step up from the rock bottom of the AVP era, he is a filmmaker who, in my opinion, has yet to earn his reputation as a worthwhile auteur, or in this case, a quality name brand. All too often, his films devolve into a string of one under-developed badass character after another shooting and/or getting shot amid a purely adolescent-adrenaline soaked aesthetic. Fortunately, that sounds perfect for the Predator series, which, at its best, consists of otherworldly creatures stalking The Most Dangerous Game. (That would be mankind, thank you very much.)

In this case, it’s the most dangerous of the Most Dangerous. A bunch of heavily armed roughnecks, assassins, trained killers, and out-and-out psychopaths awaken while being airdropped into a strange jungle environment, only to realize that they must form an uneasy alliance if they are to survive as the hunted. Clearly, these Predators love a challenge, which is why they make a point of hunting only the biggest and baddest of mankind. Schwarzenegger and Jesse Ventura in the original film (That’s right, it was open season on future U.S. governors). Danny Glover in Predator 2. And now… Adrian Brody?!?   Wait a minute. Looking this over, I’m seeing a definite downward stair stepping in terms of action hero chops in this series. Brody is a great actor in the right part (he did win an Oscar for working with Polanski, for crying out loud), but how he wound up cast as the bulked-up, no-nonsense big-gun-totting man-of-few-words in this film, I can only wonder. I’m guessing the conversation in casting office went something like this:

CASTING AGENT #1: Okay! We’re all set to make Predators! Who can we get for the archetypical male action hero lead? How about Jason Statham?

CASTING AGENT #2: Not available. Stallone has him tied up filming The Expendables.

CA1: All right, then how about one of these UFC guys? Or a WWF personality! Let’s get Randy Couture or Stone Cold Steve Austin!!

CA2: No can-do. Stallone also has them in The Expendables, too.

CA2: All in The Expendables, chief.

CA1: Hire them both. One can bulk up and be archetypical male action hero lead. The other guy can play the skittish-yet-shady doctor who’s along for the ride. Toss a coin.

As you can plainly see, we’re currently in the midst of a serious action hero shortage. When movie producers convince themselves that guys like Jake Gyllenhaal (The Prince of Persia) and Adrien Brody are the Errol Flynns and Arnold Schwarzeneggers of our day, clearly we have a problem. For my money (and that’s not much), the biggest problem with the otherwise enjoyable if forgettable Predators is Adrien Brody – both his character as written, and his performance. Brody imbues this one-note roughian gun-totter with an Eastwood-esque snarl and the kind of unflinching confidence that borders on absurd. He rarely speaks in complete sentences: “This is their jungle. Their game. Their rules. We’re the prey.” Brody isn’t a deal-breaker for this film, but he comes close. (For the record, Topher Grace is just fine as the doctor.)

Despite the Troublemaker Studios branding, director Nimrod Antal avoids unmotivated hyper-kinetic visuals and camera pyrotechnics that one may expect. He does harness the badass aesthetic of Rodriguez’ best work, albeit through the non-Brody characters/actors. Antal’s visual approach leans to the side of understated; his pacing generously allowing the plot (such as it is) to breath, and the creatures to bask in their ferociousness. Antal has delivered the best film with a predator in it since the 1987 original. That may not be saying all that much, but it is saying something. Predators is by no means perfect, but all in all, it is a sequel worthy of its namesake.