Glenn Close Gives a Career-great Performance as the Woman Behind a “Great Man”. 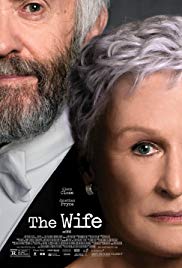 Based on the novel by Meg Wolitzer, with a screenplay by Jane Anderson, The Wife offers Glenn Close a chance to truly shine.  She is also joined by a strong cast including Jonathan Pryce (Pirates of the Caribbean: The Curse of the Black Pearl, Tomorrow Never Dies), Max Irons (The Woman in Gold, The Riot Club), Elizabeth McGovern (Downtown Abbey), Annie Starke (Father Figures), Harry Lloyd (The Theory of Everything), Alix Wilton Regan (The Brave), and Christian Slater (Mr. Robot, True Romance).

Joe Castleman (Jonathan Price) is a mess.  He can’t sleep as he nervously waits for the call that will let him know if he has been chosen to receive the Nobel Prize for Literature after a lifetime of success as a writer.  That call comes as he and his wife Joan (Close) listen over the phone to the Swede who has called to congratulate them and give them some details of the ceremony.

The film is engaging, mainly due to the performance of Close, who has possibly never been better.

Through an intimate gathering of friends, along with their adult children, David (Irons) and Susannah (Regan), the Castleman’s break the news, but cracks are beginning to show on the public facade they present to the outside world.  This will all culminate, of course, at the Nobel Prize ceremony in Stockholm, Sweden, that may threaten everything they’ve built. 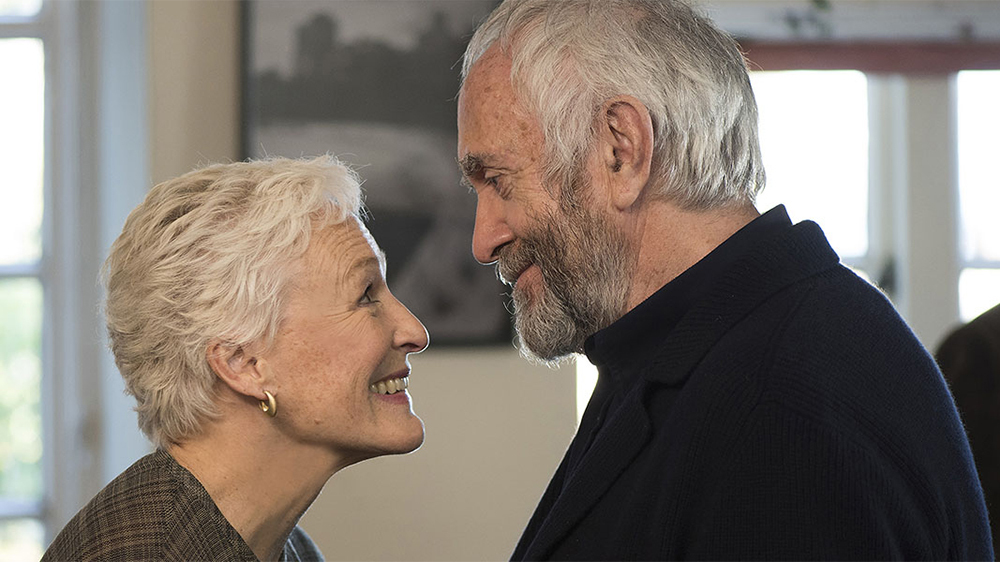 While Joe is the one getting the accolades and attention, Joan is the one holding things together.  She is the one who sets Joe’s watch to remind him to take his blood pressure medication.  She’s the one to calmly serves as a referee between Joe and their writer-son, who has submitted a story to his father for feedback, but who is lashing out from Joe’s silence, clearly preparing to be ripped to shreds based on past history.  She is also the one who calmly keeps the peace on the flight as an aspiring would-be biographer of Joe, Nathaniel Bone (Slater), makes his presence known. This is despite the fact that Joe does not want him to write his biography, and suspects Bone means to embarrass Joe through more of a gotcha tell-all approach about Joe, rather than a distinguished look at his storied career.

Close keeps things, well…..close….to her character’s metaphorical vest, as her interpretation of this character of Joan slowly begins to lower her emotional wall that she has erected over decades.  Through flashbacks, we learn the story of how the young version of Joan (played by Close’s real-life daughter, Annie Starke) first meets Joe (the younger version is played by Harry Lloyd), a married college professor, and we also slowly learn the true nature of the role she played in his career.

The film is engaging, mainly due to the performance of Close, who has possibly never been better.  Pryce is also good, and Slater’s part of the slimy, opportunistic journalist looks effortless.  Max Irons isn’t given much to do by the script other than be angry, then bitter, then scowling, before rinsing and repeating the whole character arc over and over.  This is not Iron’s fault, but he is a victim of a shallowly written character. 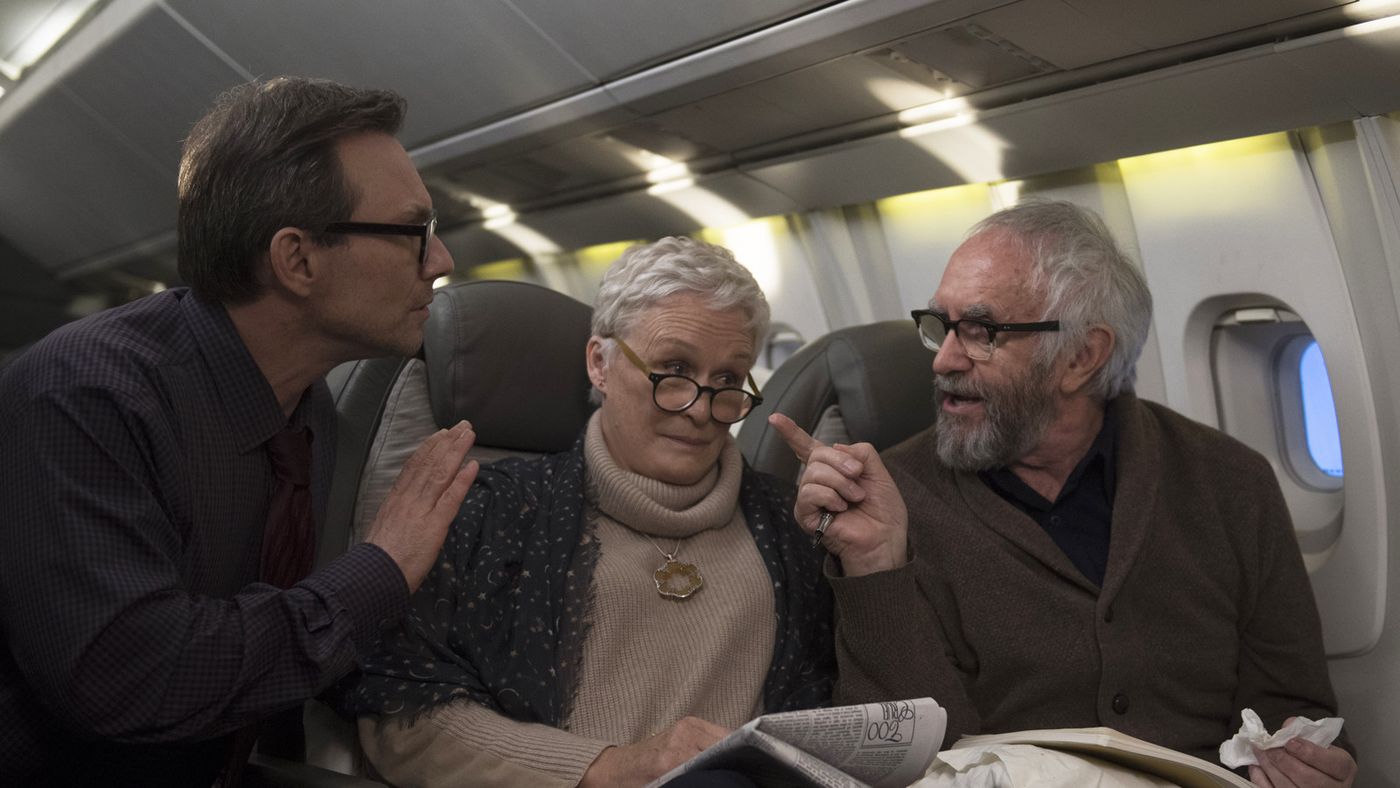 While the film simply covers this one trip to Stockholm and the simple day-to-day details they must do leading up to the ceremony, including all of the many social engagements all of the Nobel Prize winners across multiple fields must attend, it is able to create a compelling enough tension to keep the narrative moving.  Largely, again, this is due to Close knowing how and when to shed layer after layer of her character Joan’s bottled-up emotions, and the context of their importance to the current story, as she dutifully follows her husband Joe from event to event.  The more she is treated as the supportive wife of her all-important man-of-the-hour husband, the larger the cracks appear in their relationship.  Eventually, all of the threads converge, and we are presented with a full view of her life with Joe Castleman, the Nobel Prize-winning writer.

The strengths of this film is the marriage relationship of Joan and Joe, as well as the slowly revealed back story that looms large over Joe’s most celebrated night in Stockholm.  Both actors (Close and Pryce) are up for the challenge, but Close will be looking at a possible Oscar nod for her performance as she gives a master class of poise and control.  The weaknesses of the film are in the secondary relationships in their life, namely the ones with their children, or any pretty girl in the scenes that Joe might have eyes for .  I would have liked to have seen a deeper exploration between Joe and his son that illicited more than surface emotions from the character of David.   Pacing was also a problem at times, but on the whole it consistently provides enough movement to build some of the tension.

The Wife has much to say about the nature of the role of women, both professionally, culturally as well as within the marriage relationship, for the generation of Baby Boomers who might start looking back on their lives, second-guessing if the sacrifices they made were worth it.  The film is worth a viewing if only to see the performance of Glenn Close, who is fully in her prime, commanding the screen with her mere presence much like perhaps only Meryl Streep, or Daniel Day-Lewis is able to do.  This may be a role that delivers her Oscar gold, even if the rest of the film is more average fare. 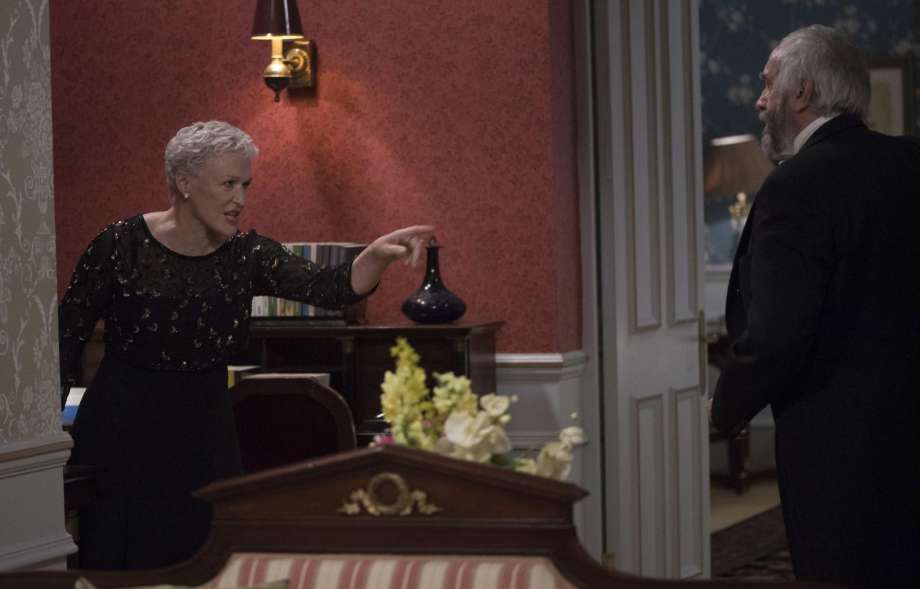