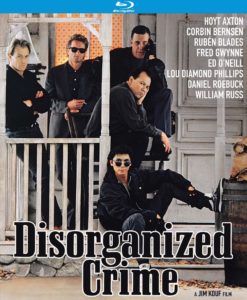 The cast of Disorganized Crime is a late-80s dream team:  Corbin Bernsen, Rubén Blades, Lou Diamond Phillips, William Russ, Ed O’Neill, Daniel Roebuck, Fred Gwynne.  There’s even a small part for Hoyt Axton, and what a pleasure it is to hear his deep drawl again!

Unfortunately, the material is less charming than the cast.  Disorganized Crime is a heist comedy with plenty of verbal sparring between characters, and an overabundance of physical comedy.  It’s not bad, it’s just middling.  It always seems to be underachieving, which is an unpleasant thought to have while watching a film.

Disorganized Crime begins with the appearance of Frank Salazar (Bernsen) a bank robber on the lam from New Jersey who has somehow found his way to Montana where he plans to rob a small town bank.  He’s called in a crew for the job – each with a very special set of skills.  Blades is a smooth, sharp tongued trigger man; Gwynne a world weary explosives expert; Russ is a hotheaded safe cracker, always looking out for himself.  And Phillips is the young wheel man who meets them all at the town’s train station and transports them to a rundown mountain cabin.  Everyone is there, except Frank.  Disorganized Crime tells its story in parallel tracks, and while we’re following the team at the cabin we’ve also seen that Frank has been apprehended by a couple of cops (O’Neill and Roebuck) who’ve tracked him from New Jersey.  They don’t have possession of Frank for long -they’re not the sharpest officers – and Disorganized Crime contains extended scenes of the officers trying to track Frank through the Montana wilderness while Frank is also having some harrowing man vs. nature moments.  This portion of the film is where the most egregious slapstick comes into play.  Suffice it to say that more than one character winds up sans pants, and there’s a lot of desperate shouting. 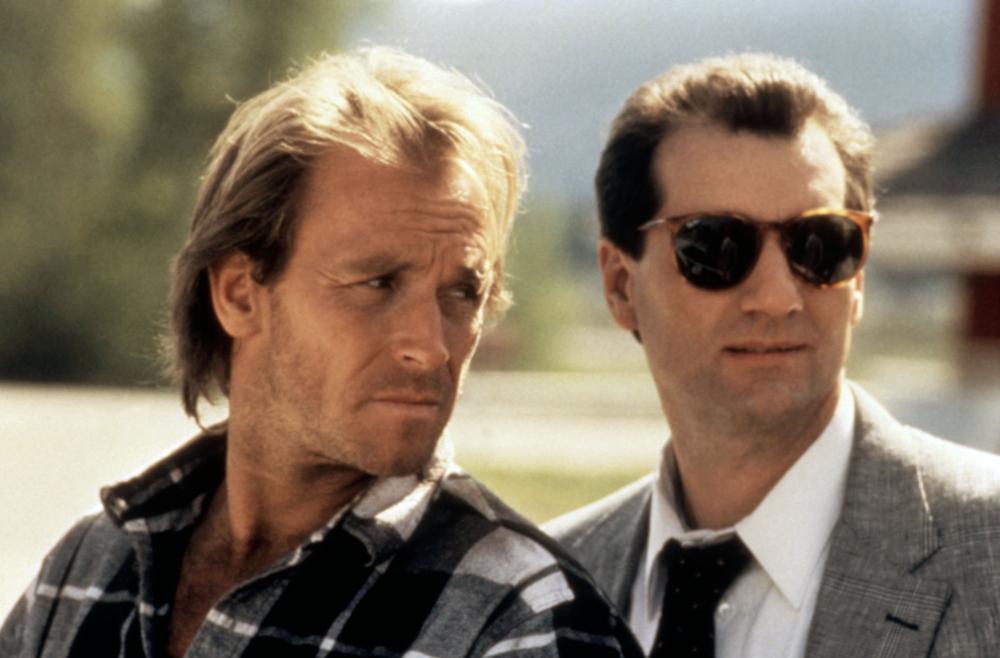 The interplay between Frank’s team is more satisfying.   Rubén Blades as Carlos, in particular, exudes cool charisma and Fred Gwynne’s performance as Max Green brings more gravity to the film than it probably deserves.  When Frank fails to show, his team decides to follow through on the bank robbery without him. It does not go without a hitch, and many setbacks and indignities are inflicted on them.  The real buffoonery is reserved for Denver and Lonigan, the hapless police officers.  Director Jim Kouf (Stakeout), who also wrote the script, makes Denver and Lonigan just bright enough to put them on a collision course with the intrepid, exasperated, quarrelsome band of criminals.  As for Frank?  He’s so far removed from the action, he might as well be in another movie.

The last act of the film is the most entertaining, and there are a couple of moments when Fred Gwynne gets to drop Max’s sourpuss demeanor and give the explosive, wide mouthed laugh we all remember from The Munsters.  It’s pure nostalgic delight.

Kino Lorber’s Blu-ray faithfully renders the film’s colors, and the sound is sharp.  Extras include documentaries on the making of the film from Kouf and his wife, Lynn Kouf, who served as producer; and from Daniel Roebuck.  The theatrical trailer for Disorganzied Crime is also included.