Two years following Psycho, in which Alfred Hitchcock so cagily utilized young Anthony Perkins, the actor turns up playing yet another mentally unstable lawbreaker. This time he’s in Paris, faking his death in the interest of an insurance scam; one worth $120,000. Despite being married to an especially beautiful Sophia Loren, he’s a total cad, seeing other women on the side while remaining frighteningly possessive of his wife.

Their marriage is of the “soul-sucking trap” variety: She wants out, but can’t find the door. Finally, she announces she’s done. When he counters with an offer for freedom that will include his promised disappearance, she’s convinced to do her part to score the payout. If only it were so simple…

Five Miles to Midnight is a nightmare story. A classic morality tale played as entertainment potboiler. By that standard, the film is pretty good. But who’s nightmare is it? In reality, it could be that of an old-school film publicist, looking for mileage on an oddly “stock” yet compelling star driven thriller/drama such as this. And speaking of mileage, that title does no favors. Merely a dropped line in the film, a downright forgettable title based upon a unit of distance measurement not even utilized where the story takes place is a head-scratchingly poor choice. 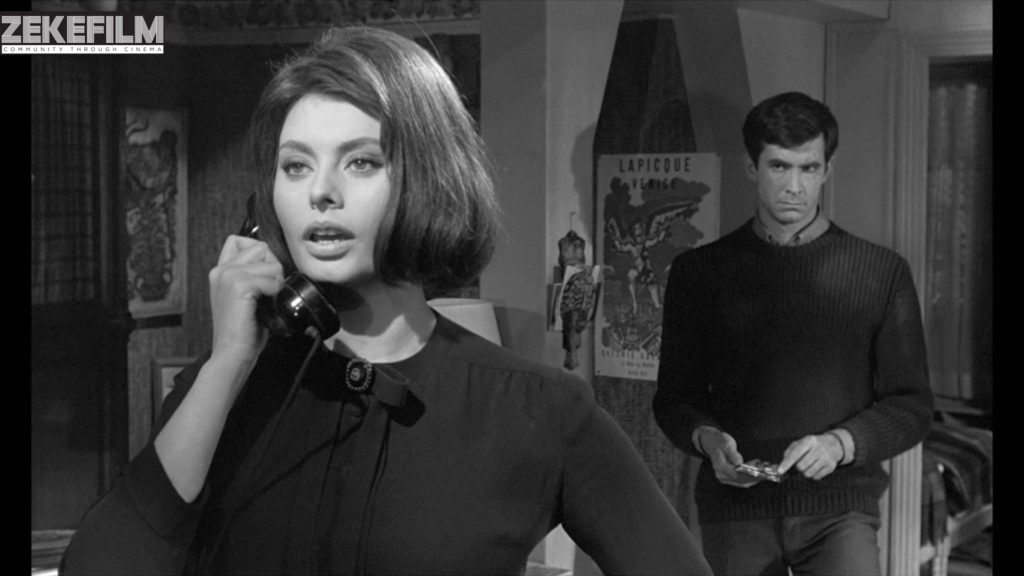 Unsurprisingly then, Five Miles to Midnight is virtually unknown. This, despite the presence of the two easy-on-the-eyes leads, the well photographed Paris location, and a director with a pretty solid track record. (The Snake Pit, Anastasia) By today’s opening weekend-centric standards, in which longevity matters less and less in favor of the immediate box office haul, perhaps the on-and-gone nature of Midnight doesn’t matter. Yet, for a well made, well performed film that has the markings of a work that should be better remembered, one wonders why it is forgotten to the degree that it is.

Perhaps the film leans entirely too heavily on persona. The personas of Perkins and Loren were, at this point, not just established, but popular. Perkins, having only recently turned the corner from being groomed as one of Hollywood’s latest boy heartthrobs, plays a character who is, from the outset, well, a psycho. He may not stab anyone to death in the shower, but his depiction of an obsessed and tightfisted husband is fueled with a palpable beneath-the-surface broil. Loren is great as his boxed-in spouse in what is clearly a long-flaccid marriage. As the most famous and most successful of the several major Italian beauties of the time, it’s worth noting that this is an actual heavy-lifting acting role, her highly expressive face being by far her most revealed asset throughout. This marks the second pairing of Perkins and Loren, and is said to be a far more estranged and even “queer” depiction of a traditional marriage. (Their first screen pairing was Delbert Mann’s pre-Psycho 1958 romance Desire Under the Elms.)

Midnight was helmed by the Ukrainian-born Anatole Litvak, one of history’s most international working directors. His own history of relocation, sometimes under political duress, is varied, diverse and on par with that of Fritz Lang. In 1925, Litvak left the Soviet Union for Germany, where he fell in with filmmaking powerhouse UFA. Upon the rise of Adolf Hitler, he fled to Hollywood, where a studio career soon followed. Later still, he would settle in France, where this international production, and several others took root.

Like the actors themselves, Litvak’s directorial persona marks him as right for Midnight, with its global cast (all playing their native nationalities) and theme of being trapped and needing to get out. Although Litvak’s career is long and varied, specializing in this very type of crime/suspense story, Five Minutes to Midnight goes regularly unmentioned in the late director’s career recaps. 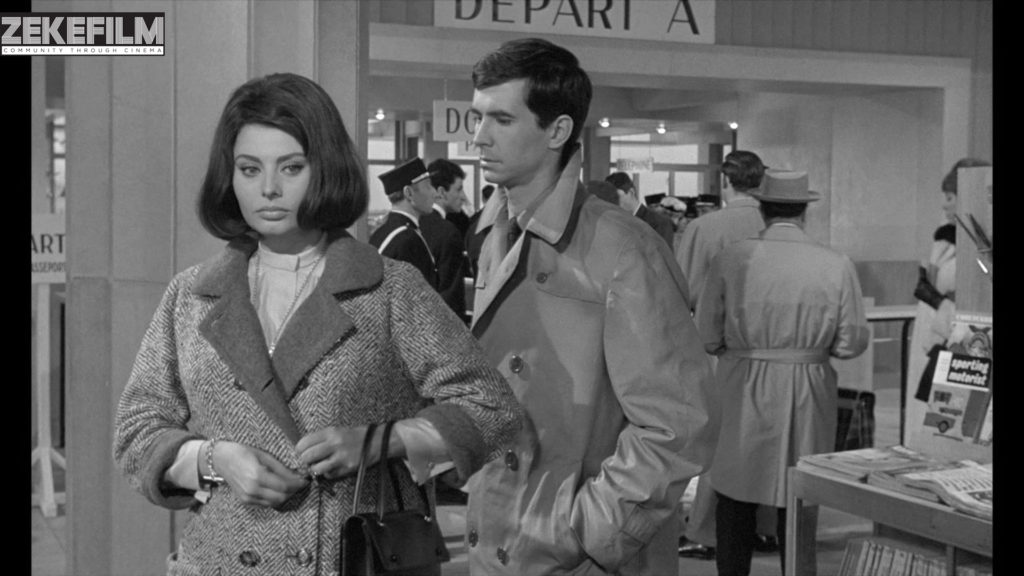 The new blu-ray edition from Kino Lorber’s Studio Classics line boasts a terrific transfer of the black and white film, popping with proper contrast, film grain, and detail. The audio, on the other hand, might be a more mixed bag. While always audible, this reviewer experienced arbitrary obvious lip synch issues throughout. This could be inherent in the film itself (how much of the dialogue was recorded post-synch?), the blu-ray’s production, or my home player? (Although this is typically not an issue with other discs.)

Extras include a seven minute French language alternate scene, and an array of trailers for other Sophia Loren movies. On a fun note, the cover art is reversible – choose between one of two great, vintage cover designs!

Five Miles to Midnight is a worthwhile catch for fans of Anthony Perkins and Sophia Loren; a thoroughly watchable film about a desperate woman who illegally gives in to financial temptation even when she herself doesn’t care about the money. Just as in stories such as Sam Raimi’s A Simple Plan, paranoia and consequences pile up, even as we root for “the right people” who are nonetheless doing wrong.

The images included in this review are screen captured images taken directly from the blu-ray.