#52FilmsByWomen: TRIUMPH OF THE WILL

“Masterpiece” Documentary is a Turgid March of Nazi Propaganda 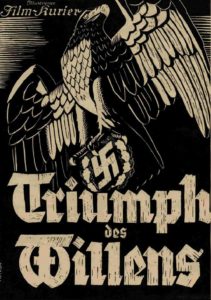 Fascism is boring. I suspected as much, but I’m now convinced, after watching Leni Riefenstahl’s documentary, Triumph of the Will. It’s one of those movies that has a reputation far larger than its contemporary viewership. As with The Birth of a Nation, most of us know what we’re supposed to think about Triumph of the Will. It is a great film, but propaganda for an evil narrative. Yes? Well, yes and no. The Birth of a Nation, D.W. Griffith’s love letter to the Ku Klux Klan is  genuinely great filmmaking in service of disgusting ideas. Watching it was, for me, a strange mixture of revulsion and admiration.

Triumph of the Will, on the other hand, is not great film making. Riefenstahl has technical skills aplenty, and she sometimes uses them in interesting ways. But on the whole, the film is tedious, repetitive, oppressive to the point of being smothering.  What I suspect is that Riefenstahl had so thoroughly bought into the ideas she was promoting that she was blind to how dreary and lifeless they really were.

Triumph of the Will was shot at a September 1934 National Socialist Party Congress and Rally in Nuremberg. It was a year and a half after Hitler’s election as Chancellor of Germany, and also – by Hitler’s count – a year and a half into the 1,000 year Reich (Hitler didn’t think small – you can say that for him). Just a few months earlier, in June, Hitler had ordered a purge of the party leadership, leading to the executions of more than 80 and the arrest of over a thousand. But there are no signs of internal dissent in Triumph of the Will. This is propaganda in its purest form. No untidy regiment, no careless word, no facial expression will mar this image of national unity and Fuhrer-worship.

This is propaganda in its purest form. No untidy regiment, no careless word, no facial expression will mar this image of national unity and Fuhrer-worship.

There were 700,000 people in attendance at the Nuremberg Rally. 700,000 tiny cogs for Riefenstahl’s machine, all perfectly placed. And it does seem more like a machine than a living organism, this Germany, with Hitler the towering figure from which all others derive meaning and purpose. The documentary includes excerpts from speeches from a number of party leaders, but Hitler (of course) is given the most time. His speeches are meaningless to me – packed with words about Germany’s rise from humiliation, and loyalty to the party, and the endless glory that awaits German’s with pure blood. These are “trigger words” to use a modern phrase, sparking some reaction in the crowds that I cannot emotionally comprehend. Of course, those reactions are clearly not spontaneous. The thundering “Sieg heils!” are too uniform, rising and falling in perfect unison as if someone was flashing an “applause” sign.

I could say much more about this film – certainly about it’s technical merits and Riefenstahl’s artistic skills –  but it depresses me to think of it. That this dark, heavy, monolithic vision seemed glorious to Hitler’s followers not only confuses me, it worries me. We’re watching the rise of right-wing nationalism across Europe, and it’s shadow is falling across the American presidential campaign, too. In times of rapid change and global instability an appeal to absolute order, a powerful state, and ideological and ethnic purity starts looking better and better to people. What I see in Triumph of the Will may be impressive in a “How did they get so many people so perfectly arranged?” kind of way. But it’s not inspiring or beautiful. It’s grim, dehumanizing, and dull. 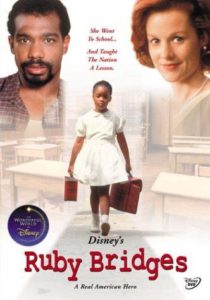 I am shaking off the Triumph of the Will- induced queasiness by remembering this well made Disney movie about a small child fighting against racism and violence simply by showing up, with bravery and grace, over and over again.  Ruby Bridges (Chaz Monet) was only 6 years old in 1960 when she became one of the first four black children to integrate the New Orleans public school system.  The other three children attended the same school, but Bridges was alone in integrating her school.  And soon she was alone in another way, as white parents and teachers pulled out of the school.  For over a year one teacher, Barbara Henry (Penelope Ann Miller), taught Ruby Bridges as her only student.  Each day, Bridges passed through a crowd of venomous protesters outside the school.  The archival photos alone are gut wrenching:  watching it reenacted on screen by a little girl is almost unbearable.  But that real little girl was a hero, and a model for the times we live in.  She conquered evil not simply through strength of will, but through a deep faith in the power of love and forgiveness.  May her tribe increase.