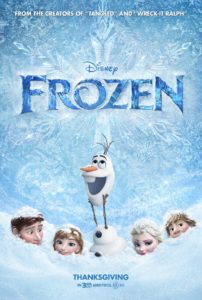 “Experience the greatest Disney animated event since The Lion King!”

Although one trailer for Frozen makes the claim, don’t set your hopes that high. Instead, base your expectations on the next line from the trailer: “From the creators of Tangled.” Fans of Tangled and Enchanted will love Disney’s newest princesses, even if their story overlaps quite a bit with Rapunzel’s and Giselle’s.

After her parents mysteriously sealed the palace gates and her older sister Elsa spurned her friendship, Princess Anna (Kristen Bell) wants nothing more than to see the doors flung open and for someone to fill her loneliness. However, when Elsa (Idina Menzel) accidentally turns her coronation into a snowstorm with secret magical powers, she runs away and leaves behind an eternal winter. Now Anna must search the snowy woods for her sister to bring back summer.

Although you can foresee the ending 20 minutes in, Anna’s sleigh ride journey is still worth the trip. Her sweet and spunky personality keeps the energy up, and her traveling companions provide good company, especially the scene-stealing snowman, Olaf (Josh Gad). The catchy tunes bring the story to life, which I’m sure you already know because you’re still trying to get “Let It Go” out of your head three years later.

The catchy tunes bring the story to life, which I’m sure you already know because you’re still trying to get “Let It Go” out of your head three years later.

Although Frozen chooses Anna for its main character, Queen Elsa has room for character development, too, which is a fresh change from the usual one-heroine narrative. Some lyrics border on cheesy, but Bell and Menzel prove their Broadway roots with their vocals, which combine beautifully in duets. The animation adds to the magic, too, with Elsa’s stunning ice creations.

Though the story stays entertaining, some of its character archetypes and plot points look all too familiar. We saw a socially isolated princess go on an adventure with an unrefined man in Tangled, and we saw another receive a proposal on first meeting in Enchanted. Some moments also feel rushed and the final conflict resolves quickly and inexplicably.

One theme leaves a gaping hole, too. In one song, the characters sing, “People make bad choices if they’re mad or scared or stressed/Throw a little love their way…and you’ll bring out their best!” Disney has sung about the power of love many times, but it seems inconsistent to chalk up all bad behavior to fear and insecurity. Not all characters in this film fit this description or choose to change when shown love, either.

A few more sparks of originality would have fought off this chilly flick’s bits of stiffness, but this story of family, freedom from fear, and finding who you are will melt any viewer’s hesitation before the first hour ends.