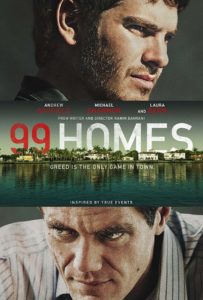 That’s the tempting logic at work in the mind of 99 Homes protagonist Dennis Nash, an upright blue collar man who’s recent homelessness has left him desperate to get his family back on its feet. Nash, played with convincing everyman vigor by Andrew Garfield (The Amazing Spider-Man), is a single father of a good kid (played by Noah Lomax) and living with his mother (Laura Dern) in his lifelong home until the fateful day realtor-gone-wrong Rick Carver knocked at his door.

Carver (Michael Shannon) is never depicted as anything less than the human embodiment of evil. When we first meet him, he’s coming away from the suicide of a suburban homeowner, presumably spurned on to the deed by Carver’s own heavyhanded eviction tactics. These tactics are soon witnessed when Carver and his small band of local law enforcement and movers arrive at the door of Dennis Nash.

Nash, despite having been assured by a judge that he has thirty days to file an appeal until foreclosure of his home, is informed that he and his family members have only a few minutes to vacate the premises. No amount of negotiation or pleas for sympathy make a difference. Carver is ruthless in his business of aquirring as many “empty boxes”, all once were beloved homes, as he can. He’s vile, and Nash knows it. But Faustian, despairing circumstances soon lead Nash into Carver’s employment, first as a handyman, then as a manager, then finally as a fellow evictor. All the while, his soul and concious are effectively placed on the delicate line. And every minute of it is felt. 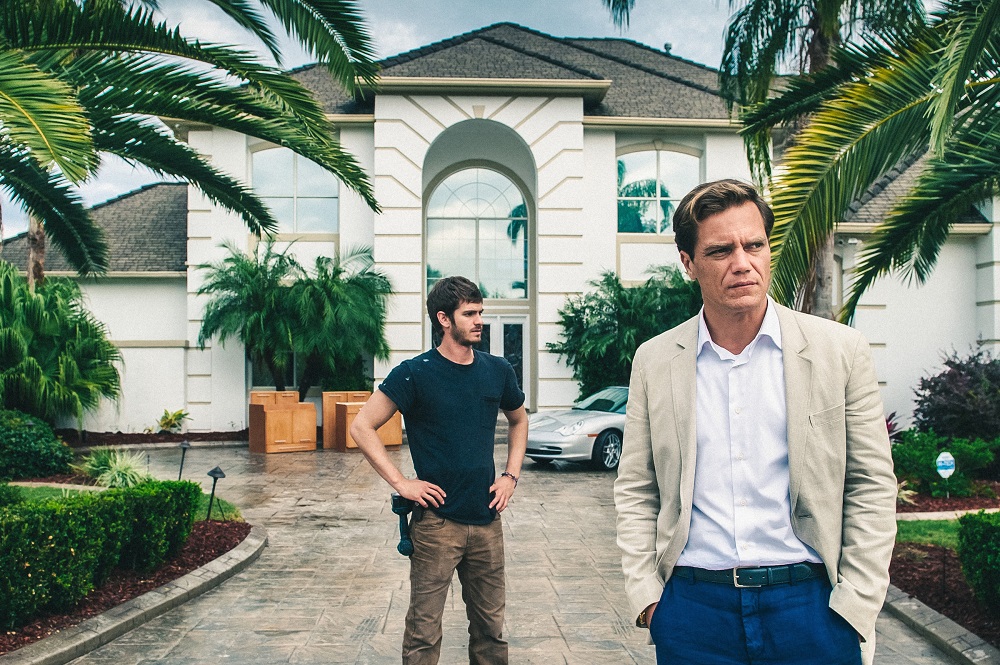 Taking place only a few years after the ecconomic crash of 2008, “99 Homes” is both an infuriating portrait of opportunism run amok and something of a contemporary Film Noir story.

Director/writer/producer Ramin Bahrani infuses the film with a melodramatic weight, not at all unappropriate to the very believable subject matter being depicted. Again and again, the heart-wrenching scene of families and individuals being abruptly ripped from their homes plays out, each time a little different from the last, if no less awful. That our sympathetic main character finds himself at the crooked side of these confrontations makes it all the more difficult to digest.

99 Homes is a terrific film for its streamlined honesty, its performances, and the human truths it sets out to tell. But its not a film that this reviewer will be keen on seeing again any time soon. The situations of institutionalized abuse of an already bent and broken banking/mortgage system depicted in the film are scarier and more tense than any horror film. For good measure, Michael Shannon’s Carver is downright satanic in the sense that he is never not sulferous, but also just alluring enough to understand why a man like Nash would allow himself to fall in with him.

An uneasy but accomplished slice of reality-based drama, 99 Homes is a cinematic stomach knot that won’t soon be forgotten. We all know not to do the devil’s business, but in a day and age when the devils of life are multifaceted and pronged from all sides (the banks, the government, the collection agencies, the corrupt officials, et cetra, on and on), 99 Homes is a resonant morality tale that shows just how hard it can be to do the right thing, particularly when doing the wrong thing seems to be the only door without an intimidating notice taped to it.