A Look Back at Clint Eastwood’s Mandela Film

The recent passing of former South African President Nelson Mandela has led to several assessments of the many movies based on his life.  Not to be left out, here’s my own opening weekend review of Clint Eastwood’s 2009 entry, Invictus!  While not a great film, Invictus is memorable for two reasons:  1.) Morgan Freeman’s solid turn as an aged Mandela late in his presidency, and 2.) its narrow focus on Mandela’s plan to unite the still-reeling post-aparthied South Africa… via professional rugby.  The result was a film that was surprisingly lightweight for both director Eastwood (then still very much in his highly prolific dark era of Million Dollar Baby and Letters from Iwo Jima) and Mandela’s life story.  Like many modern biopics, Invictus opts to hone in on a very specific niche of its subjects’ life, ala Spielberg’s Lincoln as opposed to a whole-life epic approach, such as Ghandi.  For that type of take on the life of Nelson Mandela, the new film Mandela: Long Walk to Freedom will be in theaters shortly.  In the meantime, please enjoy this look back at Invictus: 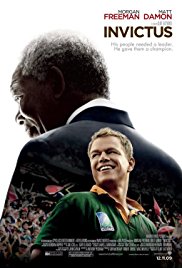 A new film from Clint Eastwood is starting to be a regular annual occurrence, like a major sports championship match or the films of Woody Allen.  Invictus, Eastwood’s latest directorial effort, has more in common with the former than the latter, as it centers around South African former President Nelson Mandela’s involvement with the sport of rugby, propelling the national team to the World Cup finals.  Missing is Eastwood’s usual looming specter of death, the most common thematic element in his career.  But on the flip side, as if to make up for it,  Eastwood’s secondary favorite elements of recent years are very present: racial tension, and Morgan Freeman (as Mandela).  The biggest surprise of it all is the fact that this film, riding in like a drama-heavy historical epic with “important” written all over it, is, in actuality, a feel good sports movie – albeit one with major racial, political, and social themes wrapped around it.

On one hand, Invictus is a nice account of President’s Mandela’s efforts to racially unify newly post-apartheid South Africa through mutual love and support of the national rugby team.  But on the other hand, the film inadvertently depicts Mandela as a rugby-obsessed eccentric, valuing it above all other pressing needs of the country.  Seriously, in virtually every scene, if Mandela’s not halting a staff meeting to turn on the TV for a rugby update, he’s bracketing World Cup stats on a chart in his office. He also visits the team on the field, and takes official office meetings with the captain of the team, played by Matt Damon.  The promise of getting to play Nelson Mandela had to sound like the opportunity of a lifetime for chronic narrator Morgan Freeman, but I have to wonder if this is the Mandela movie anyone had in mind. 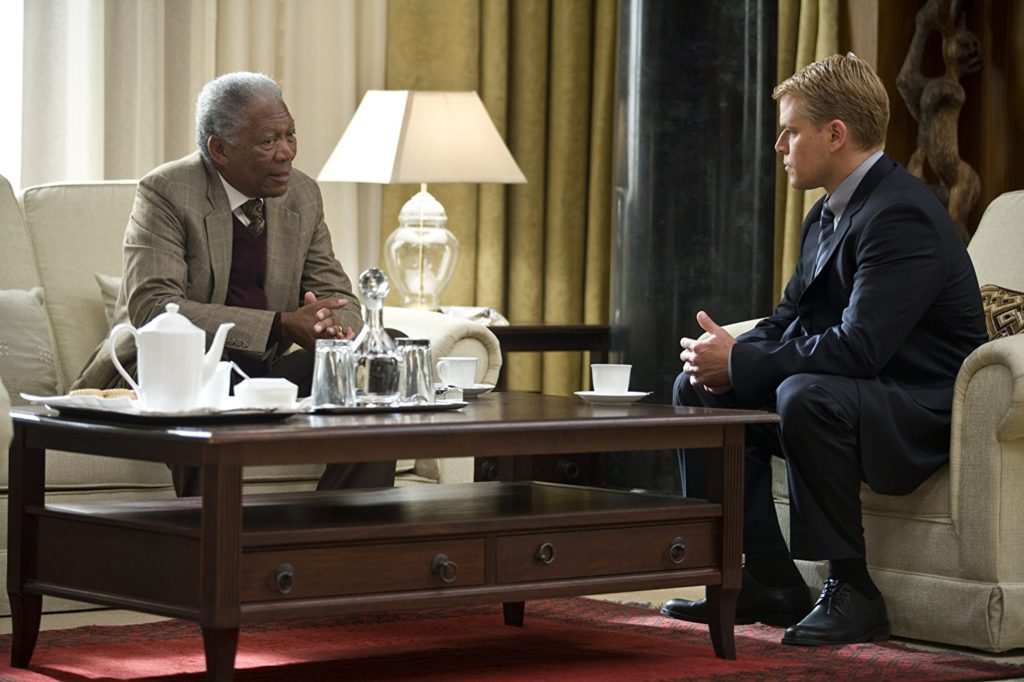 Based in events of recent history (1995, to be exact),  Invictus completely sidesteps Mandela’s great personal troubles of his post prison time, and glazes over the major tasks and other aspects of being president of a newly radically changed country.  And yet by focusing on lighter fare, “Invictus” isn’t any less of a drag that it might’ve been had it actually been saddled with all that big-picture baggage. Actually, calling the film a drag is overstating it, but if there is such as thing as a breezy drag, Invictus is it.  Eastwood can never quite find the exact focus of the story, bouncing around from Mandela, to Mandela’s security detail, to the family of the rugby team captain – but never allowing any to develop fully.  More embarrassingly, there are numerous red herring deathly threats peppered throughout the film for absolutely no good reason.  It all builds up to the formulaic Big Game, the outcome of which actually doesn’t matter at all in the greater fabric of the story.  It’s all indicative of a larger problem, which is the terminally loose screenplay.

Invictus is a lightweight tangent in Eastwood’s otherwise greatly respectable filmography of darkness, death, and human toil.  Supposedly he did it as a favor for his good friend Freeman, who yes, is great as Mandela.  In any case, we can hope that next year’s inevitable new Clint Eastwood film will go the distance, as this one never quite does.

This review of INVICTUS was originally published at twitchfilm on December 11, 2009.